A manager can make or break a player. Someone frozen out under one coach can return triumphant under another – Marcos Alonso's renaissance at Thomas Tuchel’s Chelsea is a recent example.

However, while relationships between players and coaches can often break down, they rarely reach the state of open disdain that developed between Jose Mourinho and Pedro Leon at Real Madrid.

Leon arrived at the Santiago Bernabeu from Getafe in July 2010 for £9 million (€10m/$12m), after an impressive season in La Liga in which he scored nine goals and assisted 12 in 42 appearances in all competitions.

A dead-ball specialist with a huge box of street football tricks, Leon had the potential to develop into a serious European talent.

However, he lasted just one campaign at Santiago Bernabeu before returning to Getafe, initially on loan, and then in a cut-price £5.5m (€6m/$7.5m) deal.

Leon's problem at Madrid was Mourinho, who used him as little more than a punching bag.

The winger was afforded just six La Liga appearances – never starting a league fixture and playing just 132 minutes in total – during a miserable campaign for a player who had represented Spain at Under-21 level.

The nadir came before a Champions League meeting with Auxerre in late September, when Mourinho, having left Leon out of his 18, publicly mocked the player after being questioned about his omission by the press.

"You talk of Pedro Leon as if he was [Zinedine] Zidane, [Diego] Maradona or [Alfredo] Di Stefano,” the Portuguese said. "I don't have to justify his absence." 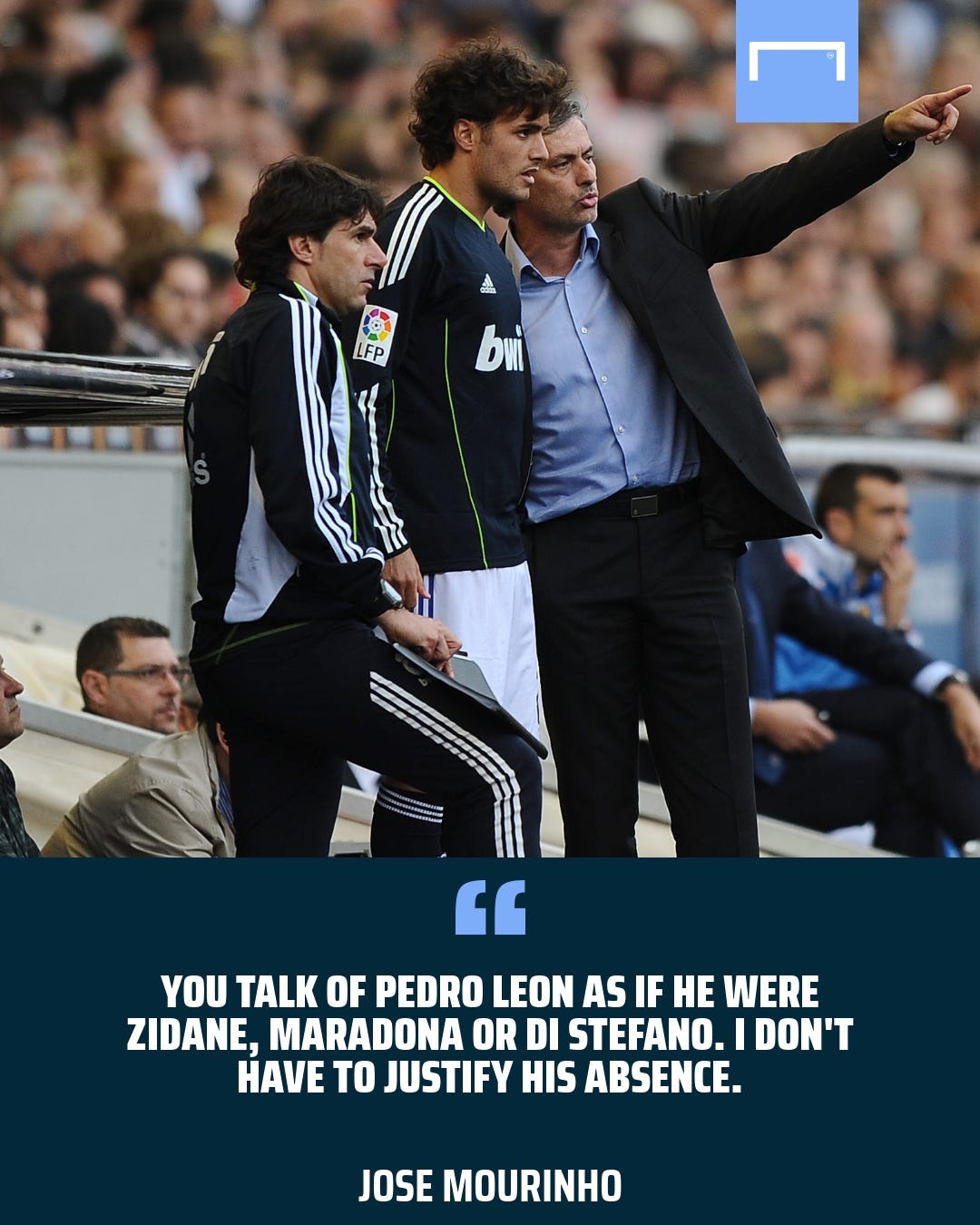 When he played, Leon showed flashes of quality, with the high point undoubtedly his first competitive goal for Madrid, which was an injury-time equaliser in a 2-2 draw with AC Milan in the Champions League in November 2010.

However, by January, it was clear that he was surplus to requirements. Clubs enquired about taking him on loan in January, but no move materialised, with Leon later personally blaming Mourinho for bizarrely deciding to block his exit.

“I had offers from Manchester City, Chelsea and Milan,” he told Spanish radio station Onda Cero in 2019. “Some wanted to sign me in winter but Mourinho didn’t let me go.”

In early February, Leon and team-mate Fernando Gago were reportedly involved in a training-ground fight. Leon was said to be unhappy with a tackle by the Argentine, and the pair argued on the pitch and later in the dressing room.

Both were dropped from the squad to face Sevilla in the Copa del Rey semi-finals but while Gago was then welcomed back into the fold, Leon remained sidelined. Mourinho had his fall guy, and there would be no changing his mind.

According to former Madrid goalkeeper Jerzy Dudek, Mourinho would constantly call out Leon for laziness. An extract from his 2015 autobiography says: "We were drawing 0-0 in a game and Mourinho told Pedro Leon to warm up, but he just stood around by the corner flag. 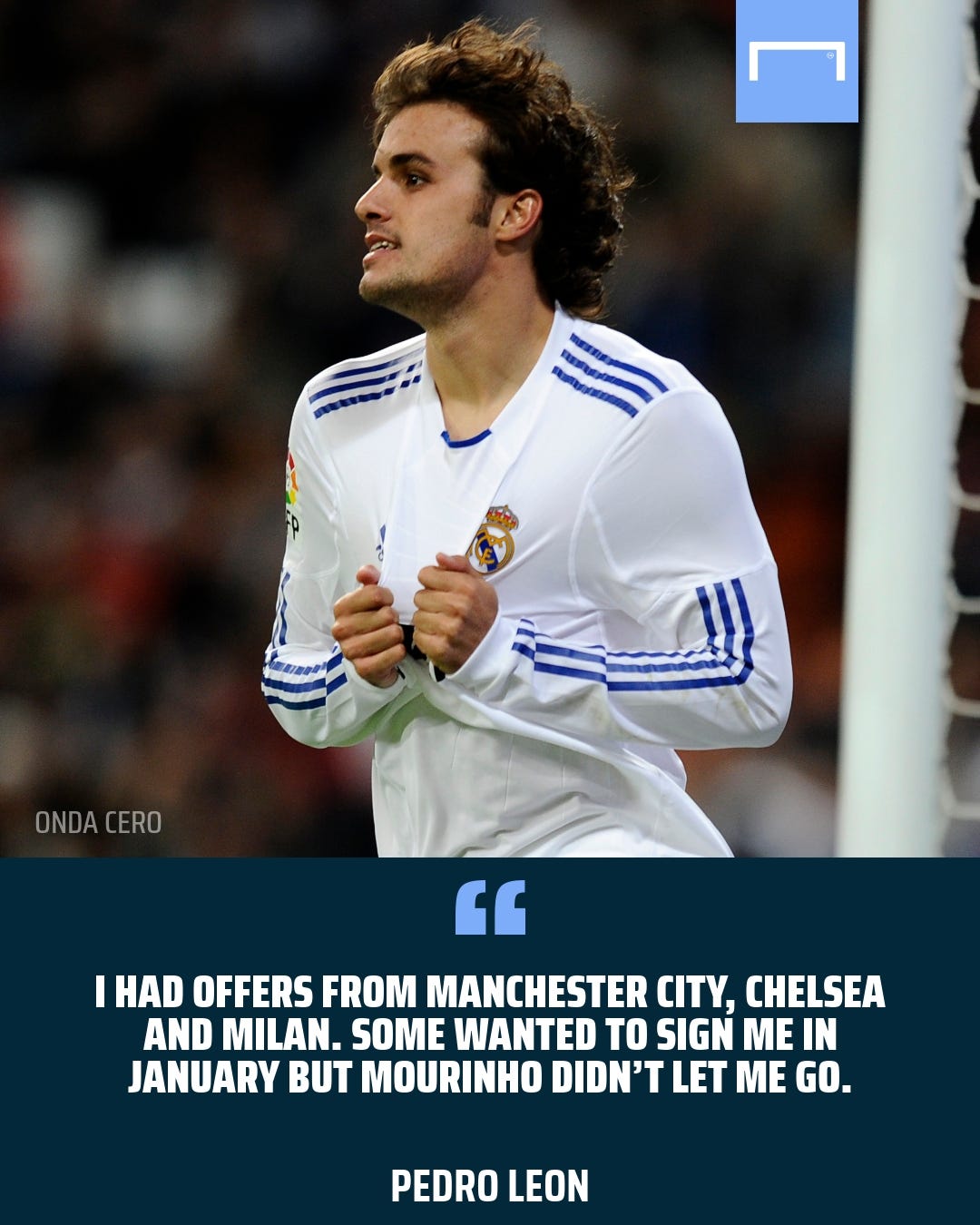 "I was sitting close to Mourinho and saw his reaction. He was furious: 'Look at his lack of effort! And then he gets offended when he doesn't play!'

"The next day we were training ahead of the Auxerre match. Pedro Leon thought he was going to play but Mourinho called us together in the centre circle and said to him: 'I'm sorry, but you're not interested in playing for Real Madrid. Others would give their lives for this shirt, but not you.'

“He looked at Pedro and told him to watch the game at home because he needed players who would die for the team.

"He told him: ‘You are unprofessional. You think you're cheating me? No. You're cheating your team-mates. I saw your warm-up. You couldn't care less about it, but I put you on.

"‘Do you care about playing for Real Madrid? Everyone has their five minutes here. You've had yours.’"

Leon subsequently dismissed these claims on Twitter as “completely false” but, whatever the truth, it was clear that there was no way he was going to nail down a regular starting spot while Mourinho was still Madrid coach.

As we have subsequently seen, with Luke Shaw at Manchester United and Dele Alli at Tottenham, it is very difficult for players to get back into the manager's good books.

Of course, Mourinho had multiple run-ins with players at the Bernabeu, most notably Iker Casillas, and it didn't end their Madrid careers.

However, while there was uproar around the treatment of club legend Casillas, Leon had none of the World Cup-winning captain’s influence or support at the Bernabeu. He was a low-cost signing from Getafe and, thus, considered totally expendable.

In the end, Leon would spend a further five seasons at the Coliseum Alfonso Perez before leaving in 2016 for Elche, where he remains a key first-team figure at the age of 34.

A creative force in Spanish football for his whole career, Leon has shown ample ability when paired with certain managers. Just not Mourinho.