For some players, success in football depends on the achievements in one’s career. For Sanchez Watt, it was having that career at all, and the dark alternative it took him away from.

Watt joined Arsenal at the age of seven and was touted as a wonderkid after helping the club win the 2008-09 FA Youth Cup.

He was one of the stars of a team that also contained Jack Wilshere, Francis Coquelin and Luke Ayling, scoring twice in the semi-final second-leg win over Manchester City before netting again after coming on as a substitute in the 4-1 rout of Liverpool in the final.

At that time, comparisons were being made with another young English winger on Arsenal's books, Theo Walcott, while then-manager Arsene Wenger was a confirmed admirer, describing Watt as a “street player” and praising his movement, work-rate and the quality of delivery from his left foot.

For Watt, football was an escape and Wenger was the father figure who facilitated his release from potential trouble.

In an exclusive interview with Goal in 2010, he revealed how football saved him from the lure of gangs and drugs in east London.

“It’s not an easy life in Hackney,” he said. “A lot of people are doing crime or living on the street but I never liked that life.

"I know quite a lot of footballers that I used to play alongside on the local concrete pitch and they took the wrong path.

“Some of them are smoking or selling drugs but these days they say to me, ‘Make sure you stick with football, it’s healthy and it helps you look after your family.'

“I wouldn’t want to be on the street where you can end up in prison and on drugs, but I know that if I wasn’t here [at Arsenal], that’s what I’d be doing.

“[Wenger] is very intelligent, very wise. We all look up to him like he’s our dad. Whatever he says, you know he means it. He gives you a lot of confidence.” 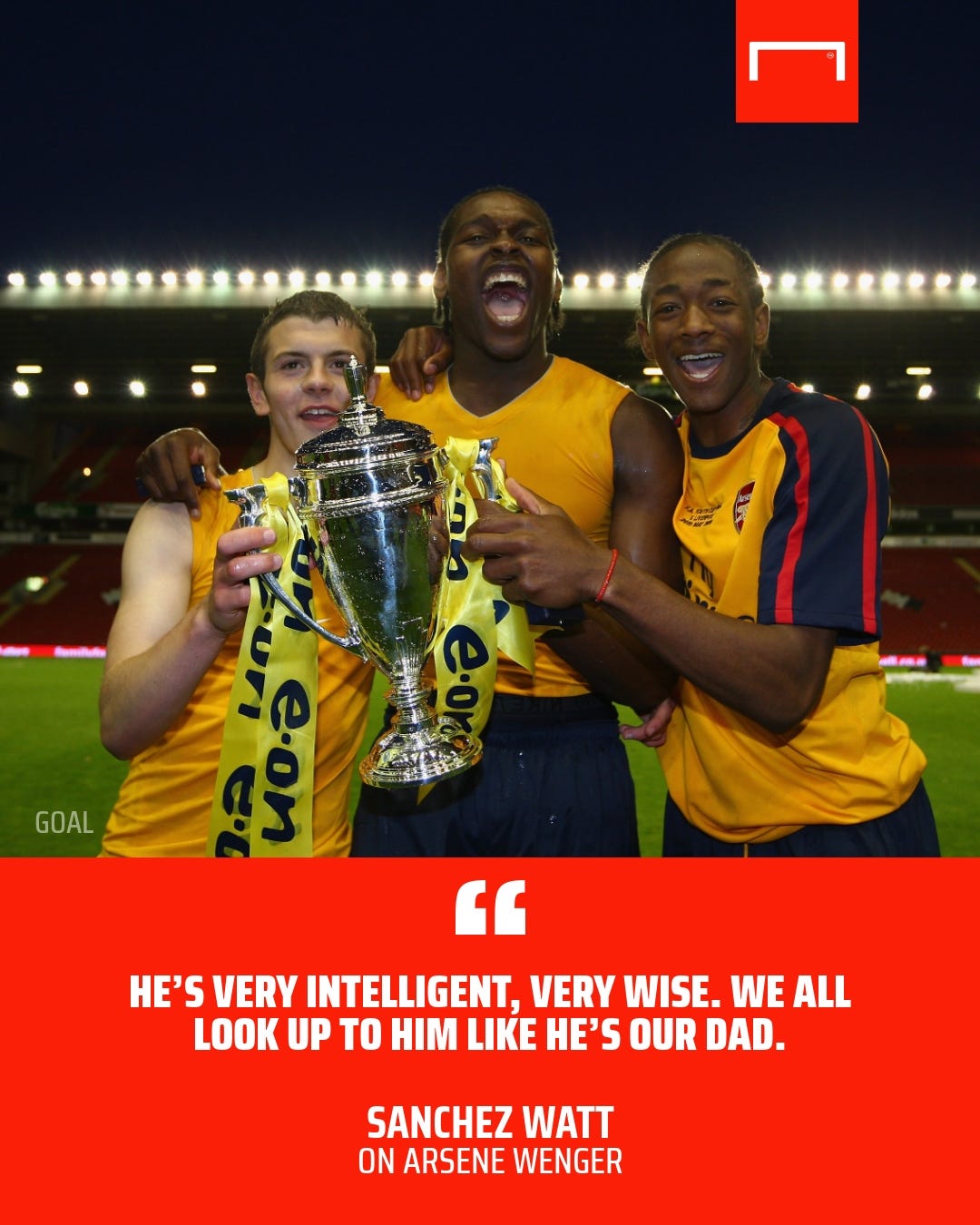 Watt burst onto the senior scene at Arsenal in remarkable fashion, scoring on his professional debut in a 2-0 League Cup win over West Brom in September 2009.

As he tucked in a rebound from a Carlos Vela shot, he looked set for a long and successful career at Arsenal. Unfortunately, it was the high point of his time at the Emirates.

Watt made two further sub appearances for the first team in the League Cup and scored freely for the reserves. However, while he was awarded a long-term contract, he never featured in the Premier League for the Gunners.

Instead, he was sent on six separate loan spells – Southend, Leeds twice, Sheffield Wednesday, Crawley and Colchester – before eventually joining the latter side on a permanent transfer in 2013.

By this point, injuries were already taking their toll – ankle problems at Southend and Leeds severely limited his playing time and stunted his development.

He wasn't helped either by the fact that when he went on loan to Sheffield Wednesday in 2011 to aid their League One promotion push, he was barely used by manager Gary Megson.

After deciding against extending Watt's stay at Hillsborough beyond January, and after just four league appearances, the Owls boss said: "He’s a talented lad but I am not sure that League One is where his future lies at the moment. I like him as a person; he’s just not physically up to the demands of this division.

“He has a lot of things going for him that would suggest that he can play at the highest level but he’s got to do other things to be able to get himself into the Arsenal team, which is a big ask because of the quality that Arsene Wenger has available to him." 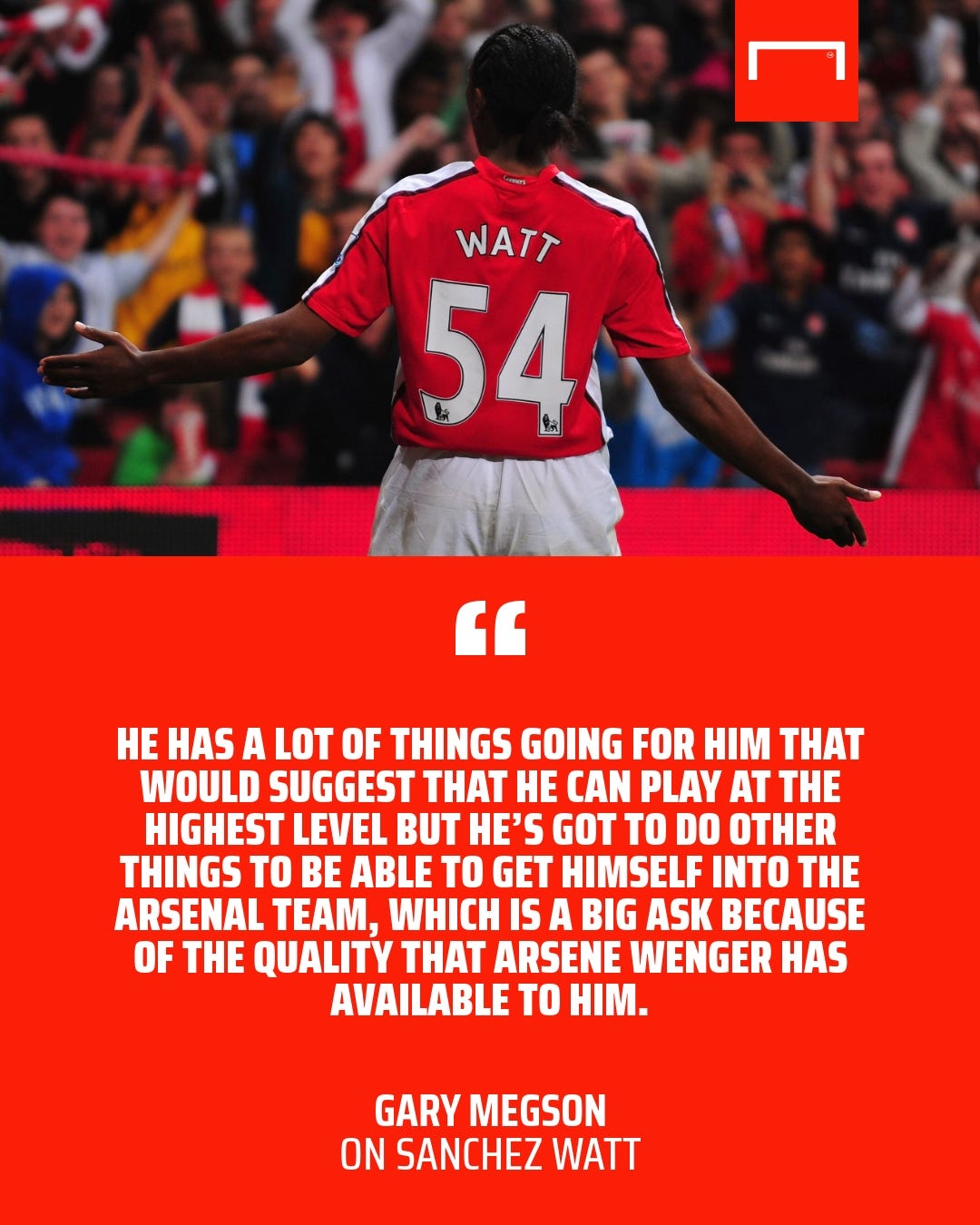 Despite Megson's unflattering appraisal,  Watt remained convinced that he could make the breakthrough at the Emirates, saying: "This summer, I just have to get out there and show people what I can do. I have been doing extra work in training to try to get ready for the new season.

"It feels good to be playing the Arsenal way again. It's been nice to come back, get fit and see the other players again. I'm just going to try to do better than I already have done in pre-season."

Despite his best efforts, though, Watt was sent out on further lower-league loans and his body betrayed him again at Colchester, where he suffered a torn hamstring and was released.

He has led a nomadic life since, taking in spells at Kerala Blasters, Crawley, Billericay and Hemel Hempstead Town.

Watt briefly appeared in the news in 2018, when he was sent-off by a referee for supposed insubordination. In reality, it was merely a misunderstanding, with the official failing to realise why the attacker kept saying "Watt" when asked to give his name for a booking!

Now, at the age of 30, he is looking for a new club after parting company with Wealdstone in the fifth-tier National League on January 1.

Watt continues to be active on social media, though, vocally supporting Arsenal, cheerleading his former team-mates and, most significantly, supporting those speaking out against racism.

He may not have become the star some expected him to be – but considering the alternative was drugs, gangs and crime, it is clear that he took the better path.

From rejecting Real Madrid to released by Birmingham at 27: What happened to ex-Chelsea starlet Josh McEachran?