Turning 28 on March 1, many expected the midfielder to be a Stamford Bridge legend, but instead he is a free agent

Just over a decade after leaving Chelsea, Gus Poyet returned to west London to take in a game at Stamford Bridge and, like everyone else in attendance, he was taken aback by the performance of a 17-year-old academy product who had just broken into the senior team.

"The whole stadium was talking about Josh McEachran after the game," the former Blues midfielder told Goal .  "People were saying he was the next [Fernando] Redondo or [Pep] Guardiola.

"Unfortunately, it didn't work out like that – despite having a great career in the Championship."

The hype around McEachran during the early days of his career cannot be overstated. A creative midfielder with tremendous passing ability and vision, he was praised by virtually every coach he played under as a young man – from Brendan Rodgers to Ray Wilkins, Stuart Pearce to Peter Bosz.

With McEachran set to turn 28 on Monday, many expected him to be well on the way to securing legendary status at Stamford Bridge at this stage of career, perhaps even captaining both his club and his country.

Instead, he is a free agent after two injury-ravaged years with second-tier strugglers Birmingham City.

In addition, he represented England at every level between the Under-16s and the Under-21s. 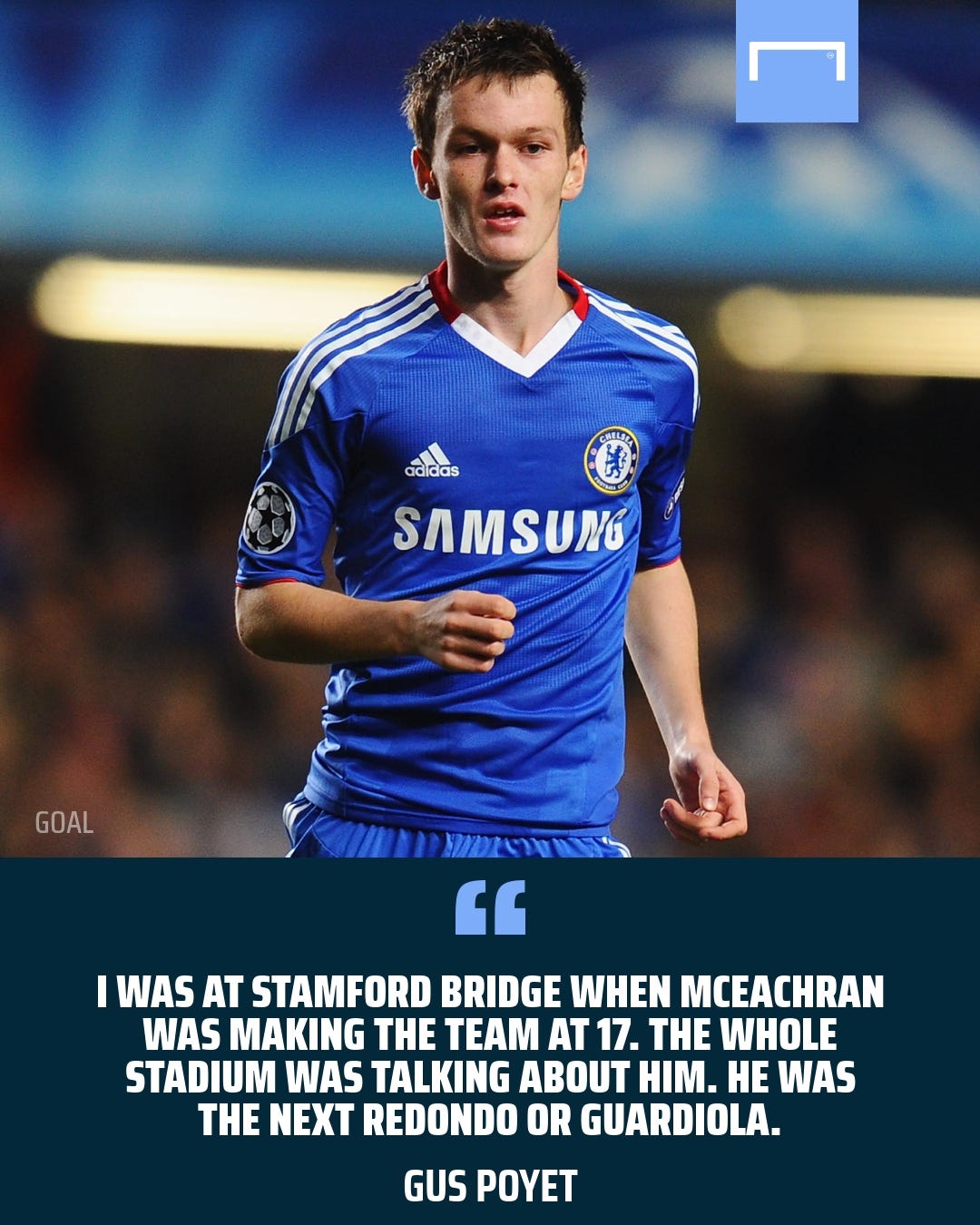 As a youngster, McEachran idolised the great creative midfielders of the early 21st century, telling reporters after a Chelsea friendly in 2011:  "With Zinedine Zidane it was everything about him, his goals, his touches. He was the complete all-round midfielder. Now he is retired, I look up to Frank Lampard and Andres Iniesta.”

The Blues manager at the time, Carlo Ancelotti, clearly saw something of those greats in McEachran. The youngster made his senior debut in September 2010 with a late substitute appearance in a Champions League victory over MSK Zilina, making him the first player born after the competition had been created, in 1992, to play in it.

He made 17 first-team appearances during the 2010-11 campaign and signed a five-year contract extension over the summer. However, he would only feature on five further occasions for the Blues.

While Ancelotti believed in McEachran, the Italian's successor, Andre Villas-Boas did not.

The Oxford-born starlet was frozen out of the first team and was pushed down a path of incessant loan spells. While Villas-Boas did not last long at Stamford Bridge, it is tremendously difficult for a young player to make an impression while out of sight in the Championship, particularly at a club like Chelsea, where the managerial merry-go-round rarely stops spinning.

During McEachran's formative years, it was going faster than ever. Ancelotti, Villas-Boas, Roberto Di Matteo, Rafa Benitez, Jose Mourinho – almost every time McEachran would return from a loan stint, he’d find a new manager waiting for him at Stamford Bridge.

Each had their own plans and ideas, primarily based around achieving success as soon as possible. Giving opportunities to young talent rarely featured on their to-do list.

His loans were a mixed bag, too. Young Player of the Year at Middlesbrough in 2012-13 and an FA Cup semi-final appearance for Wigan in 2014 were highs, but a spell of bench-warming at Swansea and an injury-ravaged stint with Watford hindered his development. 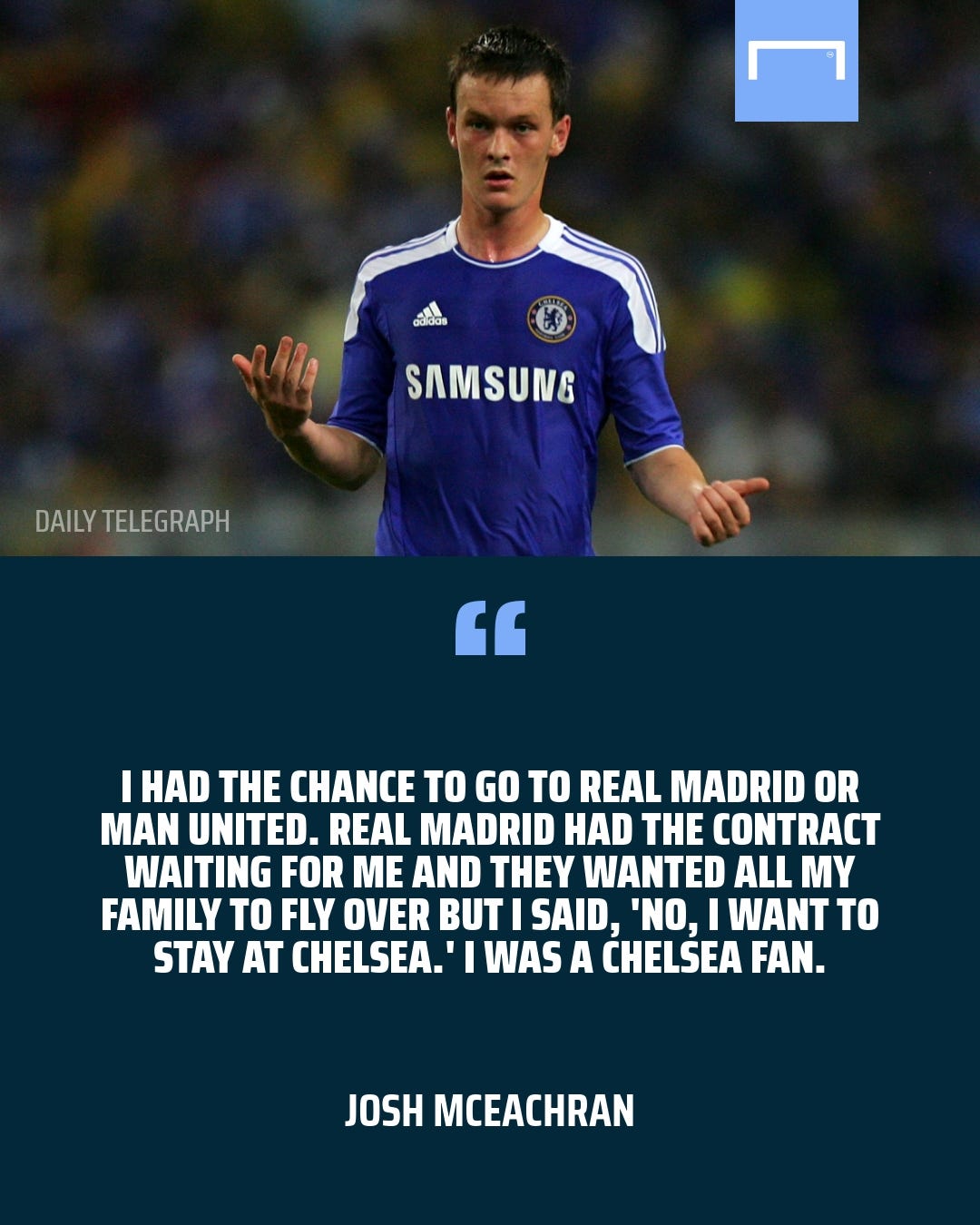 Eventually, McEachran made his way out of the Cobham loan maze and signed for Brentford, where he played 101 first team games over four years and was a regular starter when fit. Injuries were always an issue, though.

Even after he left Brentford, joining fellow Championship side Birmingham on a free transfer, he was sidelined for a year by cruciate knee ligament injury sustained just as he was starting to play regularly.

He ended up parting company with the club by mutual consent in January, having been dropped from the first-team squad.

What is perhaps most tragic about McEachran's situation is that he could perhaps have emulated his icon Zidane had he not turned down a move to Real Madrid as a youngster.

"I had the chance to go to Real Madrid or Man United. Real Madrid had the contract waiting for me and they wanted all my family to fly over but I said, 'No, I want to stay at Chelsea.' I was a Chelsea fan.

"I just believed in myself that I was going to make it. Under Carlo, when I made my debut I was saying to myself 'Ah, that was a good choice for me to say no to Real Madrid’, but looking back now maybe I should have."

In terms of sliding-doors moments, rejecting Real Madrid to end up released by Birmingham at 27 is one of the starkest 'what might have been' moments in recent football history.