The iconic Portuguese forward has seen questions asked of his future, but he is looking to deliver major silverware under a new manager

Cristiano Ronaldo has once again hinted that his immediate future lies at Manchester United, with the Portuguese superstar claiming to be “very happy” at Old Trafford as he sets his sights on winning major honours under Erik ten Hag in 2022-23.

A five-time Ballon d’Or winner has only spent 12 months back in familiar surroundings with the Red Devils, having returned to a spiritual home from Juventus in the summer of 2021, but questions have been asked of whether an initial two-year contract will be honoured.

The talismanic 37-year-old, who hit 24 goals across all competitions last season, has suggested that he will be staying put and playing an important part in another rebuilding project that is being undertaken by a highly-rated Dutch tactician.

An all-time great has told United’s ‘Player Diaries’ of his emotional return and plans for 2022-23: “I was happy of course to be back in a club that really raised my career, so it was unbelievable the feeling when I [came] back again. It was nice to feel the supporters, the happiness of them was great.

“I was, and still am very happy to be here. And what I have to say to the fans is that they are amazing. Even when you lost the games, they always support us, they are always with us. The supporters, they are always in my heart. It’s the people that we all should respect because they are the ones on our side.”

Cristiano Ronaldo scored 24 club goals in his 20th season as a professional.

The show must go on for the 37-year-old 🧪 pic.twitter.com/rmwkypoWQQ

Cristiano Ronaldo felt like the problem and the cure for much of last season. But what a problem to have.

The Portuguese provided the rare highlights of an utterly miserable campaign for United. Without him things could have been so much worse. He almost single-handedly dragged them through the group stages of the Champions League with a series of late strikes.

He was also just five goals short of joint Golden Boot-winners Son Heung-min and Mo Salah, with 18 compared to 23. That was despite playing seven fewer games than Salah and two fewer than Son.

With 24 goals in all competitions, Ronaldo can say he did his bit. The question is where United go from here and how Ten Hag can fit him into his team.

Ronaldo simply is not suited to a modern, pressing system – but he remains a goal machine. He will also want to be a regular starter.

With Ten Hag wanting to bring in a striker this summer, will Ronaldo accept less playing time? These are the issues United’s new manager will have to assess.

If Ronaldo is prepared to get onboard with Ten Hag’s regime, he could still be a hugely valuable asset. If not, he could be more problem than cure. 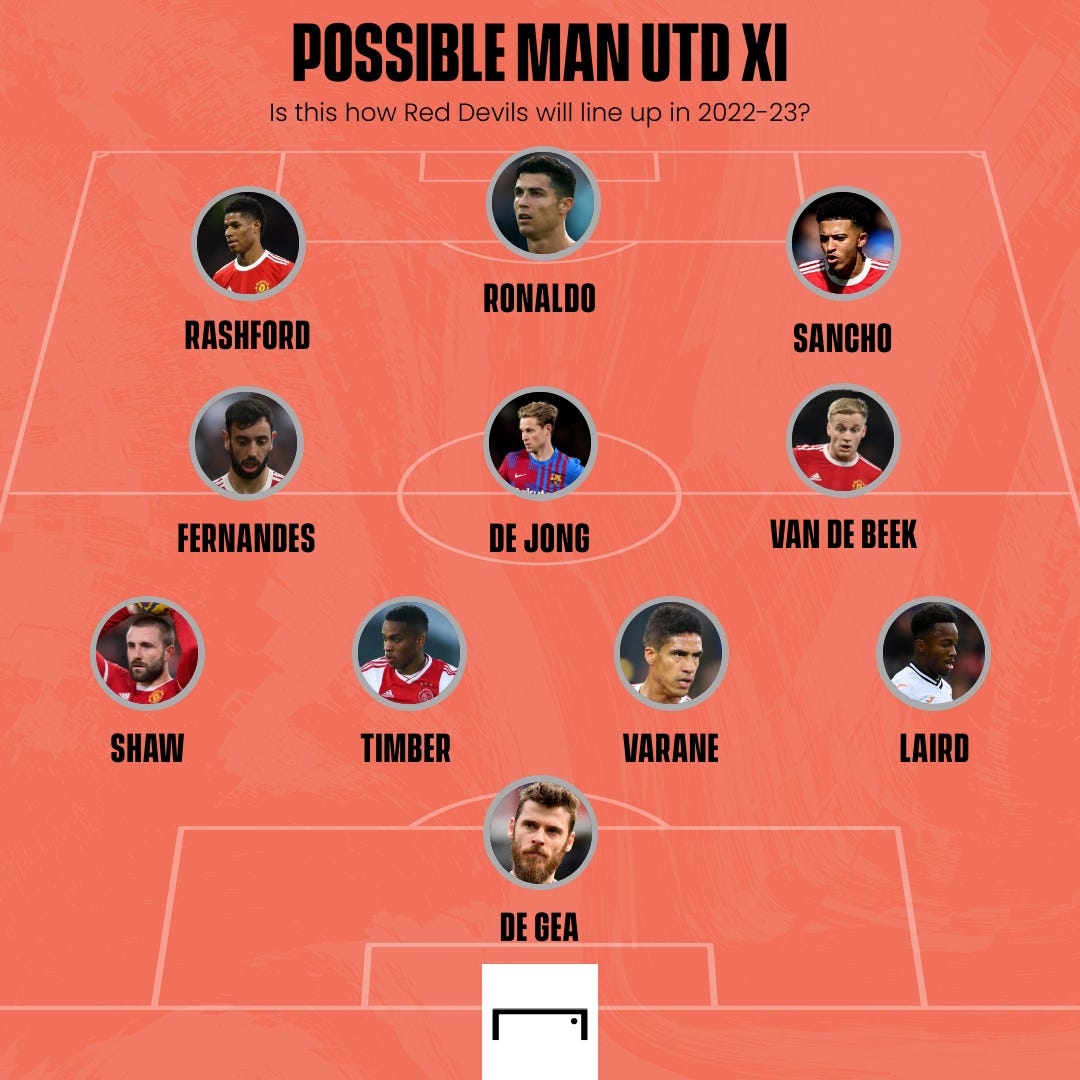 The Red Devils have, on the back of a trophyless 2021-22 campaign, gone five years without landing a major honour.

Ronaldo is, however, confident that one of the most decorated sides in world football can force their way back into contention for silverware as he continues to re-write the history books.

The Portugal international added on his ambition: “For me the most important thing is to try and win the games and try to win some championship or some cup. But I believe Manchester will be where they belong. As I said before, sometimes it takes time but I still believe.”

What have Ten Hag & Ronaldo said about each other?

United will be under new management next season in the form of Dutch tactician Ten Hag, and Ronaldo believes the right man is being brought in to deliver more tangible success.

He said of Ten Hag: “I know he did a fantastic job for Ajax and that’s he an experienced coach. But we need to give him time you know, and things need to change the way he wants.

Erik ten Hag on what he expects from Cristiano Ronaldo: pic.twitter.com/TSc7Hf183I

Ten Hag, meanwhile, has suggested he will be looking to keep Ronaldo at Old Trafford, saying at his first press conference that "goals" is what the Portuguese will bring to the team.

He added in a later interview, to De Telegraaf: "I look forward to working with him.

"Ronaldo is a giant. Because of what he's already shown and I think he's still very ambitious. Of course I'd like to keep him.

"He has been very important for Man Utd this year [and he] can produce great statistics."

Should Ten Hag keep faith in Ronaldo for next season? Post your thoughts in the comments section! 👇