Pep Guardiola will be without the club's record goalscorer for Champions League tie, but Brazilian can show he is ready to be his long-term successor

Gabriel Jesus is no longer the new kid on the block.

The Manchester City forward has been in England for more than three years and has a World Cup behind him as Brazil’s main striker.

However, at the Etihad, Jesus is still Sergio Aguero's understudy.

The 23-year-old has been effective since he joined from Palmeiras in January 2017, with a decent strike rate of 64 goals from 145 appearances.

However, while he has a healthy and respectful rivalry with Aguero, it's time for Jesus to show his killer instinct and prove that he can be the first-choice striker at the Etihad Stadium.

Aguero has just one year remaining on his contract and Jesus has to show that he is the ideal replacement for the greatest goalscorer in City’s history – sooner rather than later.

Indeed, the next month will be key to Jesus' hopes of becoming City's main man.

Pep Guardiola has confirmed that Aguero will not be fit for the last-16 second-leg clash with Real Madrid.

The tie looked over five months ago when City won 2-1 at the Santiago Bernabeu but Zinedine Zidane’s men will now fancy their chances of turning things around behind closed doors in Manchester, having stormed to the top of La Liga with a seven-game winning streak.

Whether Aguero will have recovered from an operation on a meniscus knee injury in time for the quarter-finals in Lisbon – should City qualify – remains to be seen.

Jesus, though, clearly needs to make the most of the Argentine's absence to stake a claim for a regular starting spot.

The Selecao star displayed his goalscoring instincts when he headed in the equaliser in Madrid to put City on the cusp of a third quarter-final in three years under Guardiola.

However, he started the game as a pressing left winger in a fluid line-up in which a number of players moved into the central striker role throughout the game. 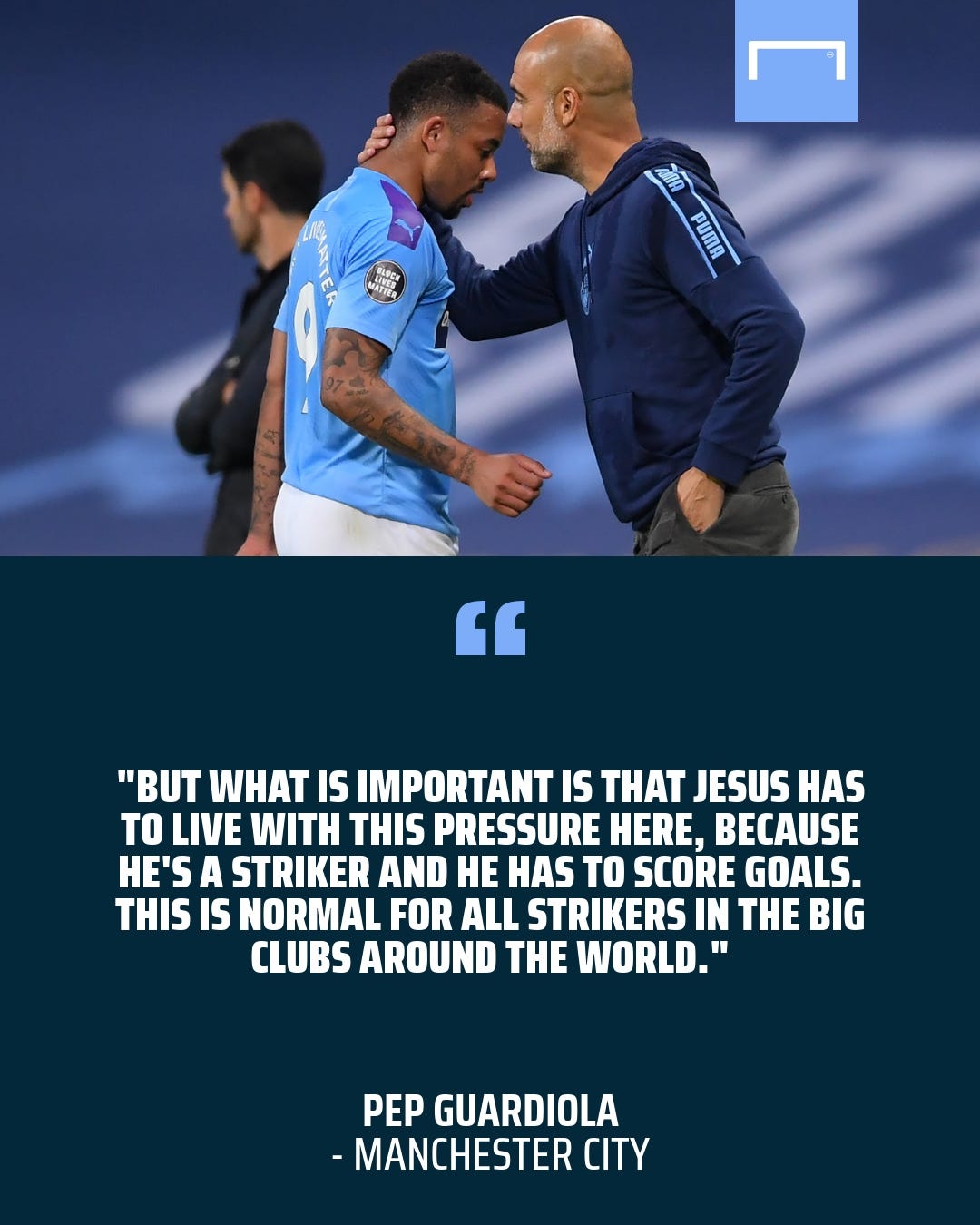 While that system worked brilliantly in Madrid, Jesus will likely be required to operate as an orthodox striker if City are to beat the best in Europe. And it is in that central role – in every sense – that he is prone to crises of confidence.

“But what is important is that he has to live with this pressure here or whatever, because he's a striker and he has to score goals. This is normal for all strikers in the big clubs around the world.”

Jesus has admitted in the past that he puts himself under too much pressure when he’s on a bad run and feels like he wants to "shoot himself in the head”.

At Russia 2018, when he was selected ahead of Roberto Firmino as Brazil’s No.9, his struggles appeared to weigh heavier with each passing game, as he failed to score in any of his five appearances, including the quarter-final exit to Belgium.

However, a year later at the Copa America, he was buoyed by a goal and assist in the semi-final victory over Argentina, and even repeated the feat in the final against Peru – before being red-carded for his over-zealousness.

Jesus' frustration in front of goal has been visible since lockdown – particularly against Southampton, when he failed to score in a game City dominated but lost 1-0.

His relief was clear in his celebration after neatly tapping in his first goal in 10 games in the 5-0 victory over Newcastle in midweek.

He could have had more but it was he who hassled Federico Fernandez into a hapless own goal before being withdrawn on the hour after a good night’s work. 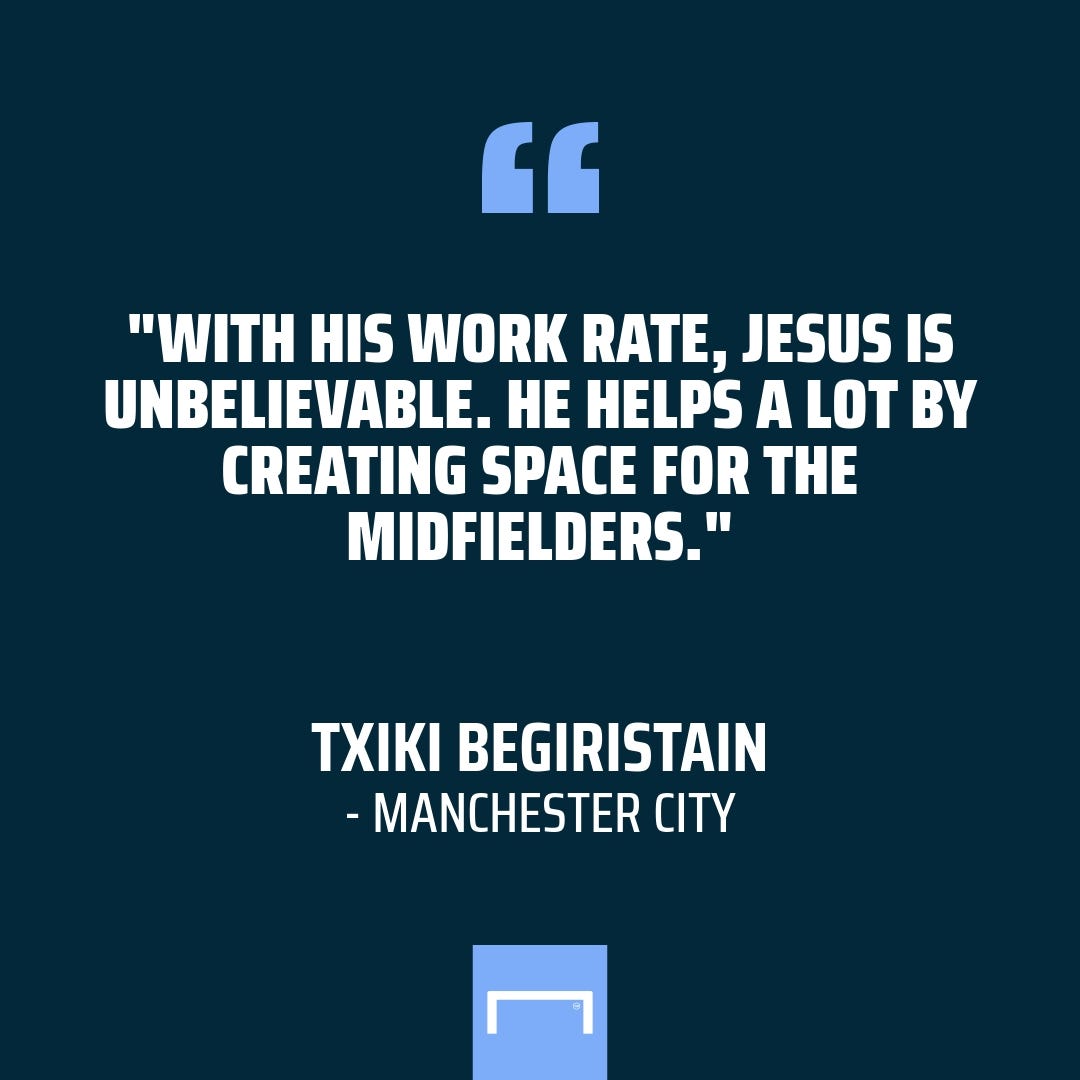 Now, the onus is on Jesus to build on that encouraging performance in the FA Cup, which is the immediate priority after City secured a top-four finish in the Premier League, and then the mini-Champions League tournament in Lisbon.

City are scouting around for Aguero’s replacement but Jesus can have a major say in what kind of striker they sign. It could either be a proven world-class striker that will go straight into the starting line-up or a youngster of great potential.

Much will depend on how Jesus' fares over these next four weeks.

Encouragingly, after watching the forward net against Newcastle, director of football Txiki Begiristain was full of praise for a player he signed for just €31.5million (£27m).

“His work rate, he’s unbelievable,” the former Barcelona midfielder said. “He helps a lot by creating space for the midfielders.

"He’s the No.9 and he likes to score and today he could. We are always happy with the work rate."

Replacing a striker of Aguero's quality, longevity and consistency is virtually impossible. But if there is need to spend big money on a top-class striker, City won’t shy away.

The next month, though, represents a golden chance for Jesus to show Aguero's heir is already at the club.