Pep Guardiola returned to Real Madrid and reminded his old rivals just why he is so despised.

The announcement of his name drew the loudest reaction from the Madridistas before kick off, with deafening whistles and boos, but the former Barcelona boss produced another masterclass at Santiago Bernabeu.

Manchester City are living European life on the edge, but Guardiola isn't going to die wondering. With a two-year ban from the Champions League set to start at the beginning of next season, Guardiola, with just one year remaining on his contract, now goes into every tie with the threat that it could he his last.

After an hour they tiptoed closer to the precipice when Isco put the home side ahead against the run of play. But by full-time they had taken a giant leap towards a place in the quarter-finals.

There is a theory that Guardiola overthinks the big European games and few would have predicted this starting line-up to face Madrid. Despite risking the legacy of being a failure if he doesn't win the major prize the club wants so badly, Guardiola took another chance in City's first leg.

The old guard of Sergio Aguero, David Silva and Fernandinho were all left on the bench as the Catalan went with youth, pace and aggression. But while the personnel was majorly different it was a similar set-up to the one trialled at Manchester United six weeks ago in the first leg of another two-legged affair.

City playing without an orthodox striker but instead with high-pressing midfielders that flooded forward with every opportunity. A flaky United side were torn apart at Old Trafford in a devastating opening 45 minutes, but Real at the Bernabeu is a completely different prospect.

The 13-times winners of the trophy have bludgeoned their way past superior opponents in the past and their European pedigree is something that Guardiola admits his side cannot match. However, without the talisman of Cristiano Ronaldo they are not the same intimidating beast. Zinedine Zidane this season is opting for a much more cautious approach and this first leg descended into a tactical battle.

Gabriel Jesus may be Brazil's No.9, but for City he started as a left-sided midfielder where his energy harried Dani Carvajal into an early mistake. He created the first chance when he cleverly cut inside and fired a shot that was parried away by Thibaut Courtois.

His drive was matched by the thrust of Kevin De Bruyne, Bernardo Silva and Riyad Mahrez alongside him, with the quartet interchanging positions with Ilkay Gundogan and Rodri tucked in behind. 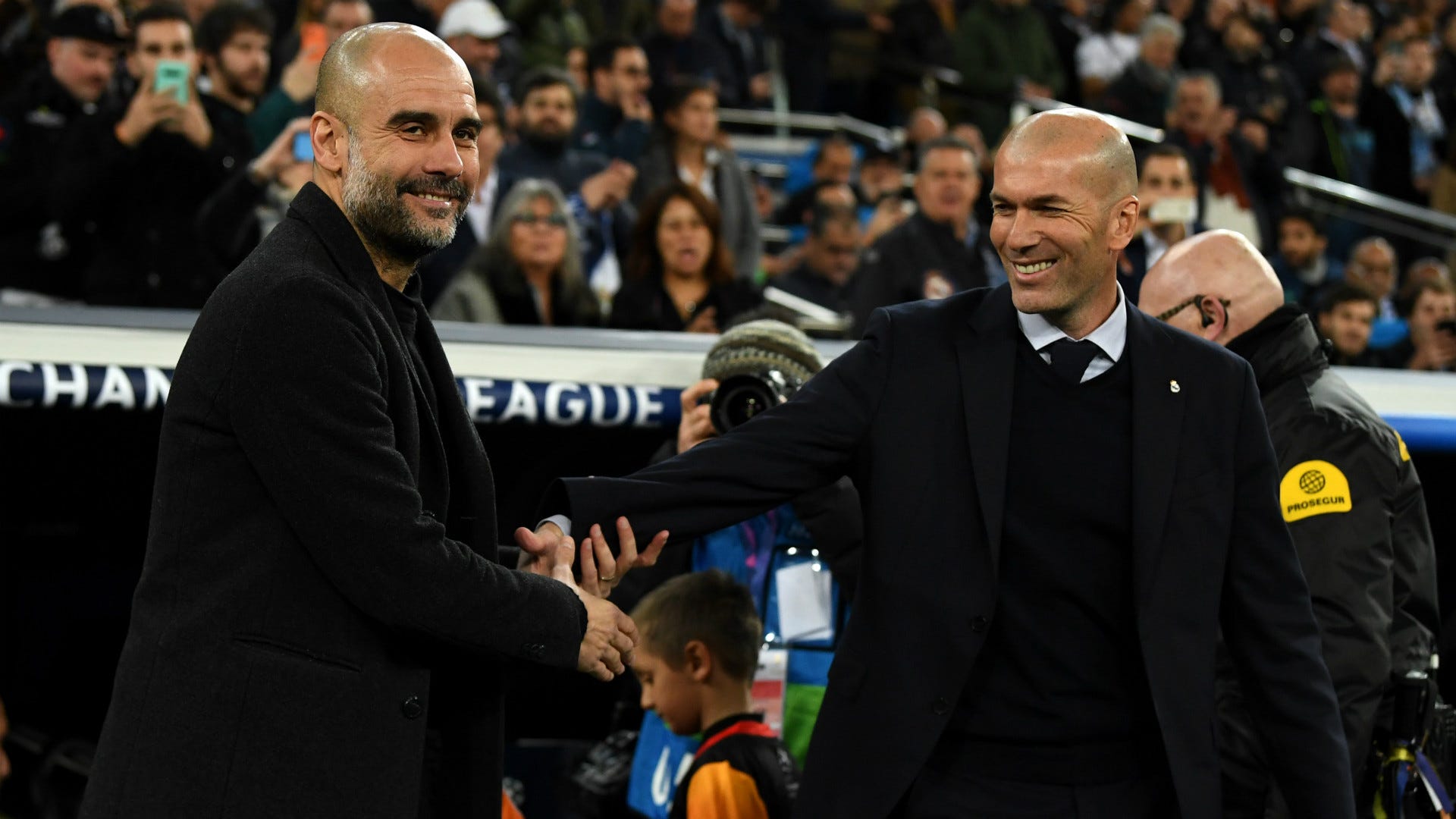 It helped to stop the creativity of Luka Modric and Isco, with Madrid's one true first-half chance coming when Karim Benzema won a far-post header, which was well-saved by Ederson.

But City blew good chances and when Rodri sloppily gave the ball away and Kyle Walker failed to clear, Isco scored and Madrid looked like they pulled off another European mugging.

But De Bruyne - the best player on the pitch by far - led the revival, setting up Jesus' header and then stepping up to score from the spot after substitute Raheem Sterling was brought down by Carvajal. City had missed their previous four spot-kicks in all competitions.

Guardiola got exactly what he came for and City go into the second leg as slight favourites. However, Real - described as the "kings" of the competition by the City boss - are a long from being out of the tie.

Benjamin Mendy will miss the game through suspension, although so too will Real captain Sergio Ramos after being sent off for the 26th time in his career, but more concerning for City will be the recovery of Aymeric Laporte.

The Frenchman is a calming influence in the centre of defence and City have not conceded a goal with him in the side since he came back from a five-month absence with a knee injury.

Within 27 minutes of him walking off the pitch they conceded had again. Without him, they rarely keep clean sheet and potential understudy John Stones did not even make the match day squad on Wednesday night. That said, Fernandinho stood in well when called upon.

City's European existence is still in the balance but a lot more secure than it could have been after Guardiola's big calls all paid off.