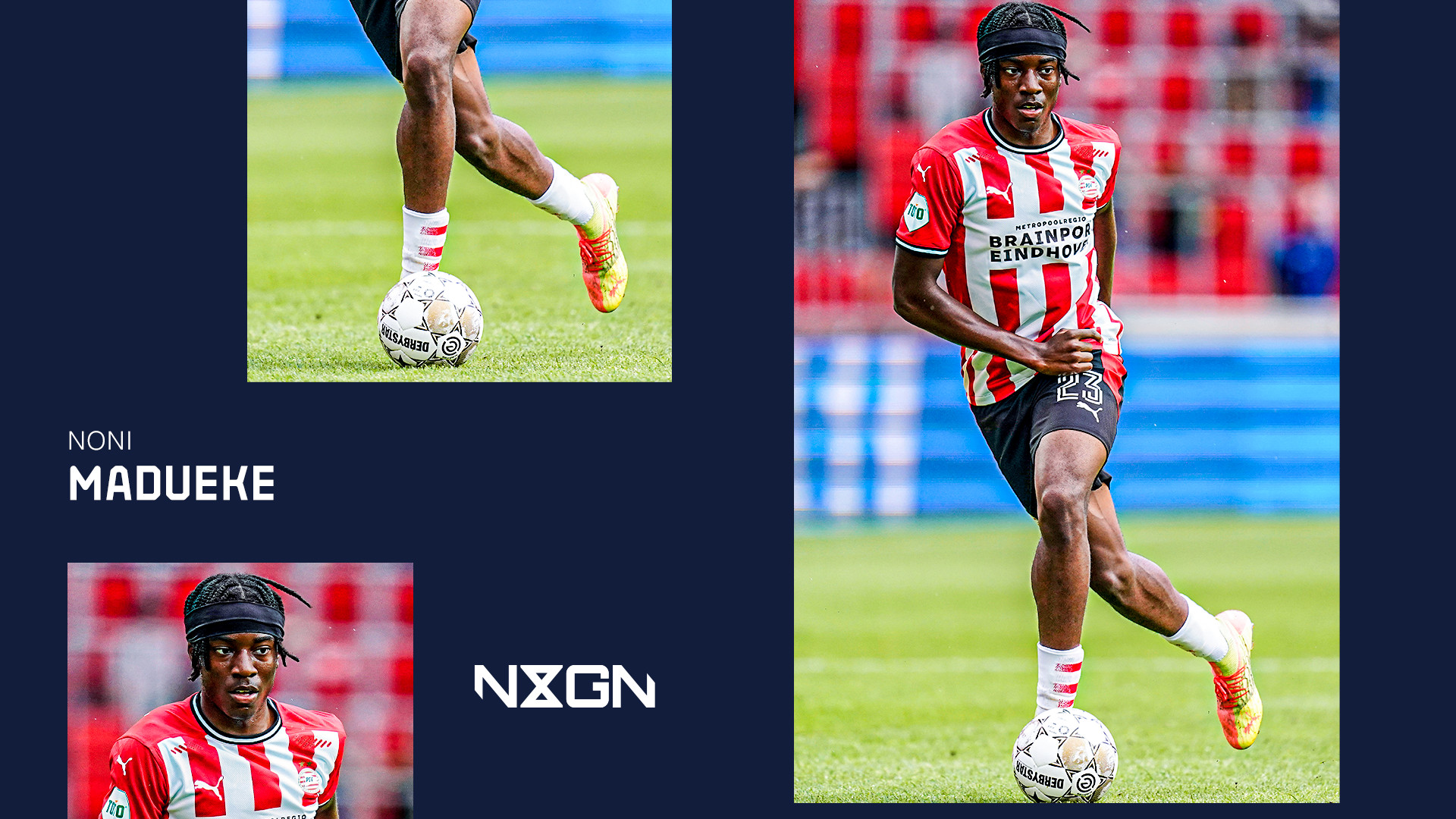 It is no secret that an increasing number of young British footballers are exploring opportunities overseas in a bid to earn first-team minutes at an earlier age.

Jadon Sancho has proven trailblazer in this regard, inspiring a number of teenagers to follow the Borussia Dortmund star to the Bundesliga. However, Germany's top -flight is not the only league offering youngsters a chance to progress.

In Eredivisie, for example, there is a young English talent aiming to make as big an impact at PSV this season as Sancho did during his breakout campaign at Dortmund in 2018-19.

That player is Noni Madueke.

"[Sancho] has opened the eyes to other talents,” the 18-year-old forward, who joined PSV from Tottenham in 2018, told Voetbal International. “A year after him, I went from Spurs to PSV. The plan that I had in mind then is now working out the way I intended it.

"In England, it is very difficult as a young talent to get into the first team, especially at the bigger clubs. The squads are very large and there is little room for youngsters. They often stay in reserve teams for a long time or are loaned out.

"There is little flow or chance to break through. That is completely different in the Netherlands."

Having taken his first steps into the senior ranks in Eindhoven before Covid-19 brought a premature end to the 2019-20 campaign, Madueke is now set to play a key role for the Dutch giants.

Before making the switch from England to continental Europe, Madueke spent the entirety of his youth football career at Tottenham, where he captained the club's Under-16s as well as making his debut for the U18s as a 15-year-old.

Having been named Player of the Tournament at the prestigious Sonnenland Cup in Germany in 2017, a number of top clubs began to take notice of his potential.

Manchester United made an offer to take him north, while Chelsea and Celtic were also linked with his signature.

But it was PSV who won the race, with Madueke keen to ensure he earned first-team football sooner rather than later.

"There are so many young players in first teams at the top level at PSV or Ajax,” Madueke told the Daily Mail of the Eredivisie a year on from his arrival in Eindhoven. "Players like Frenkie de Jong and all of these guys.

"I thought if I want to get to the first team as quickly as possible, then I have to move from Tottenham and come to PSV.

"As long as I keep doing the things they are telling me, I feel like I’ll reach that first-team level sooner as opposed to if I had stayed at Tottenham."

Despite the prospect of opportunities with the senior side, Madueke has had to work his way through ranks during his two years at PSV.

Upon his arrival he was introduced into the U17s squad, but after scoring three goals in as many games in December 2018 he was handed a permanent promotion to the U19s, for whom he netted a further four goals that season.

In 2019-20, he took his game to new levels, scoring seven goals and providing eight assists in just 11 appearances for the U19s during the first half of the campaign.

Such returns saw him rewarded with a promotion to the Jong PSV squad, who play in the Dutch second division. In six games, he scored four goals, and by early March he was again changing lockers after officially being named as part of the first-team squad.

Having made three substitute appearances earlier in the campaign, Madueke's first senior start came against Groningen on March 8, though that turned out to be PSV's final game of the season before coronavirus forced football in the Netherlands to go into hiding.

The England youth international played his part in a 1-0 win, and two days later signed a new contract which will keep him at the club until 2024, despite increased interest from Arsenal, Manchester City, RB Leipzig, Valencia and Wolves since the turn of the year.

Blessed with speed, skill and physicality, Madueke has spent much of his young career playing as a winger or wide forward who cuts inside from the right to either score or create goals.

However, new PSV boss Roger Schmidt has arrived at Philips Stadion with a plan to play 4-4-2, meaning if Madueke is to earn more opportunities he must now adapt his game so as to become a central striker.

He made the perfect start during pre-season, netting a first-half hat-trick against lower-league SC Verle that included a stunning solo strike to secure him the match ball.

"I'm not surprised. He already scored a lot of goals in training. He feels comfortable up front and doesn't have to be a winger," Schmidt told De Telegraaf after Madueke's superb display of finishing.

"Noni's timing is often very good and he has a good feeling for free space.

"I'm also very happy with his mentality. He is a good fighter and is capable of reading the situation."

Former PSV midfielder Tommie van de Leegte is excited by what Madueke can provide in his potential new role, telling Omroep Brabant: "He's fast and has the capability to trick his opponent. He brings creativity and is very explosive in his actions. That's what PSV needs.

"Yes, he's young, but age doesn't matter to me. He has shown himself in pre-season, so I would give him the chance to prove himself in the big games as well."

Though Madueke was not included in Schmidt's starting line-up for PSV's Eredivisie opener against Groningen on Sunday, he certainly did prove himself after coming off the bench in the second half.

The teenager provided two assists to help secure a 3-1 win, and it will surely not be long before he is earning regular starts just over two years since the biggest decision his young career.

“I wanted to be in the first team as young as possible, at the age of 17 or 18," Madueke said 12 months ago. "At a club like Tottenham that is not feasible – you only come into the picture around the age of 20.

"That is why I chose PSV two years ago and what is happening now with all the opportunities I get is exactly what I had in mind at the time.

"My choice has proven to be the right one."