The Reds have already made one significant signing this summer, but Jurgen Klopp needs more if they are to catch Manchester City

After the rise and the fall, will this be a season of revival for Liverpool?

Dethroned as Premier League champions, the Reds will return to their role as hunters this time around.

Jurgen Klopp will certainly hope for better luck than befell him last season, when Liverpool’s title defence was over by the end of January. And with key players back from injury, with fans back in stadiums and with his team emboldened by their form in the final weeks of the campaign, there is plenty of cause for optimism on Merseyside.

Here, Goal takes a look at what might happen during the summer transfer window, and how Klopp’s side could look come August...

Who are Liverpool signing this summer?

There has already been one high-profile arrival, with Ibrahima Konate’s signing from RB Leipzig confirmed back in May.

The Reds have paid more than £35 million ($50m) for the France Under-21 international, who will compete with Joe Gomez and Joel Matip for the right to partner Virgil van Dijk at centre-back.

In terms of further incomings, we are very much in the ‘wait and see’ period. Sources have told Goal that, ideally, there would be at least two more arrivals, a midfield player and a forward. Those signings, however, would appear to be dependant on the club’s ability to raise funds through the sale of fringe and loan players.

The midfielders looked at include Florian Neuhaus of Borussia Moenchengladbach, Brighton’s Yves Bissouma, Aston Villa’s John McGinn and Renato Sanches, who is enjoying something of a renaissance with both Lille and Portugal. Ajax teenager Ryan Gravenberch is another who has admirers within the Reds’ recruitment team.

Forward-wise, Liverpool like Ollie Watkins of Aston Villa and Pedro Neto of Wolves, though there will certainly be no deal for the latter this summer, on account of the serious knee injury the 22-year-old suffered back in April.

Leeds star Raphinha has been linked, though sources have told Goal there is nothing in those suggestions. The Brazilian does, however, share an agent with Reds midfielder Fabinho, and enjoyed an impressive debut campaign in the Premier League.

Ismaila Sarr of Watford was targeted in the past, but that interest appears to have died after Diogo Jota was recruited last September. Leicester’s Harvey Barnes is another with big admirers at Anfield, but would command the kind of fee that would rule him out of contention, this summer at least.

Who are Liverpool selling this summer?

If things go to plan, there will be plenty of outgoings this summer, as Liverpool look to raise significant funds for their unwanted squad players.

They have already lost Gini Wijnaldum, who has joined Paris Saint-Germain on a free transfer after his contract was allowed to expire, and there could be as many as 10 other first-team departures before the end of the window.

Liverpool, as Goal revealed last week, will listen to offers for defenders Neco Williams and Nat Phillips. Burnley and Southampton are interested in both, while Brighton and Newcastle have enquired about Phillips, who is valued at more than £12m ($17m).

Divock Origi would also be allowed to leave, with Wolves long-term admirers of the Belgium international. Good offers for both Xherdan Shaqiri and Takumi Minamino would also be considered.

They will look to offload both Harry Wilson and Marko Grujic, who have spent the last few seasons out on loan. Benfica are among the clubs to have asked about Wilson, though Fulham or Brentford look like more realistic options, while Grujic has interest from Germany and Italy, as well as from Porto.

Sepp van den Berg has joined Preston North End on loan, Liam Millar, the Canada international, is expected to leave permanently, most likely to Basel in Switzerland, Loris Karius will be sold and decisions must be made over the likes of Sheyi Ojo, Ben Woodburn and Kamil Grabara, as well as Nigerian striker Taiwo Awoniyi, who has finally qualified for a UK work permit, some six years after joining the Reds. Mainz, West Brom and Stoke are among those who have made enquiries there.

The future of Ben Davies, signed in January but yet to play a single minute, is unclear, but it would be no surprise if Rhys Williams, who enjoyed a breakthrough campaign last season, were to be loaned out, with a host of Championship clubs monitoring the 20-year-old’s situation.

The return of Van Dijk, Matip and Gomez, as well as captain Jordan Henderson, from long-term injury will immediately give Klopp’s side a much stronger look.

The big question surrounds that second centre-back position; will Konate go straight in or will Klopp stick to what he knows with Matip or, more likely, Gomez? 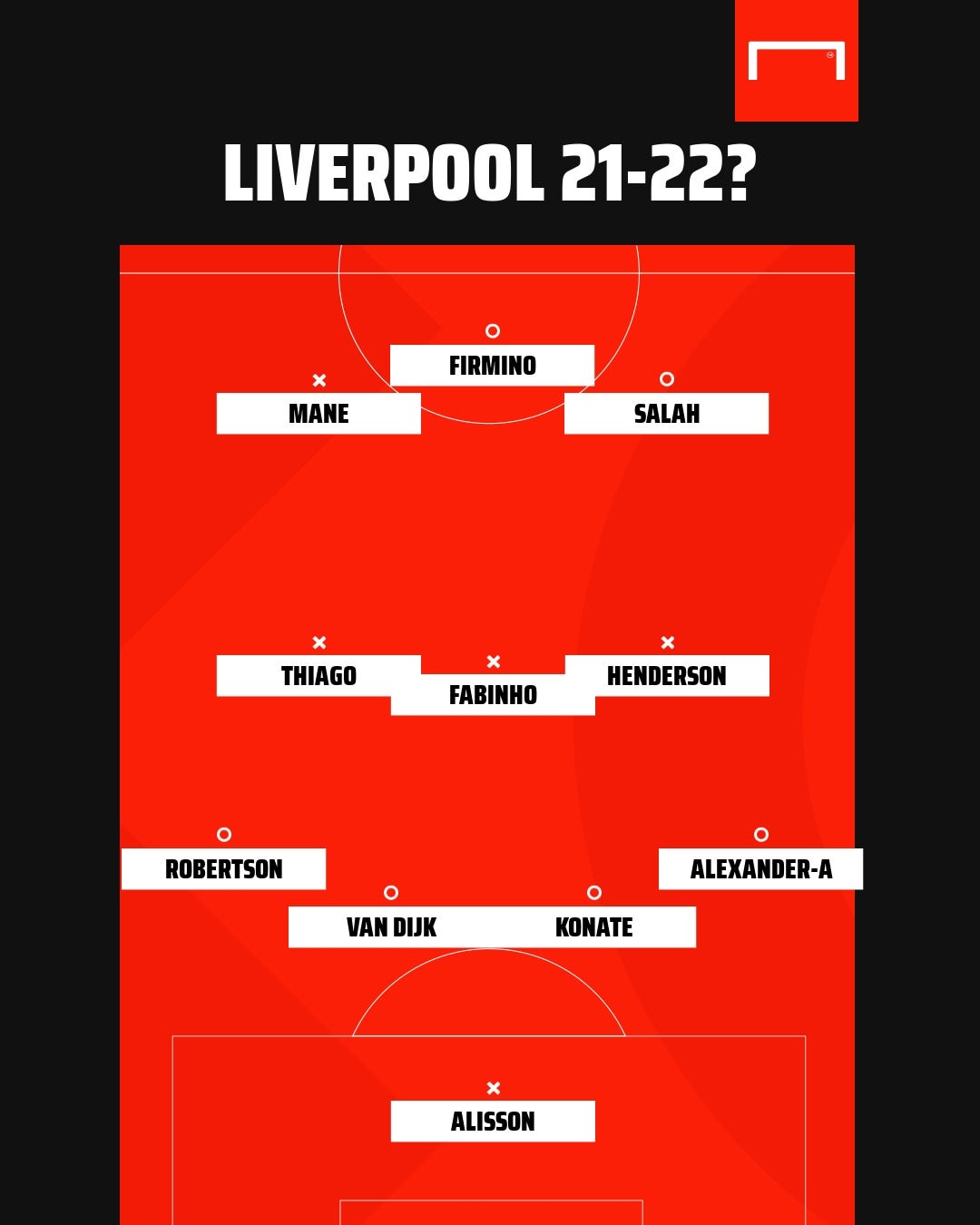 He will hope to be able to field a midfield of Henderson, Fabinho and Thiago Alcantara, who managed just 90 minutes together there last season.

Jota, meanwhile, will continue to push for inclusion in the forward line, with Roberto Firmino the man most at risk in that regard. A switch to 4-2-3-1, which was used at times last term, is another option, should the situation demand it.

The likes of Naby Keita and Alex Oxlade-Chamberlain will hope for decent minutes as midfield rotation options, though staying fit and available has been a struggle for both.