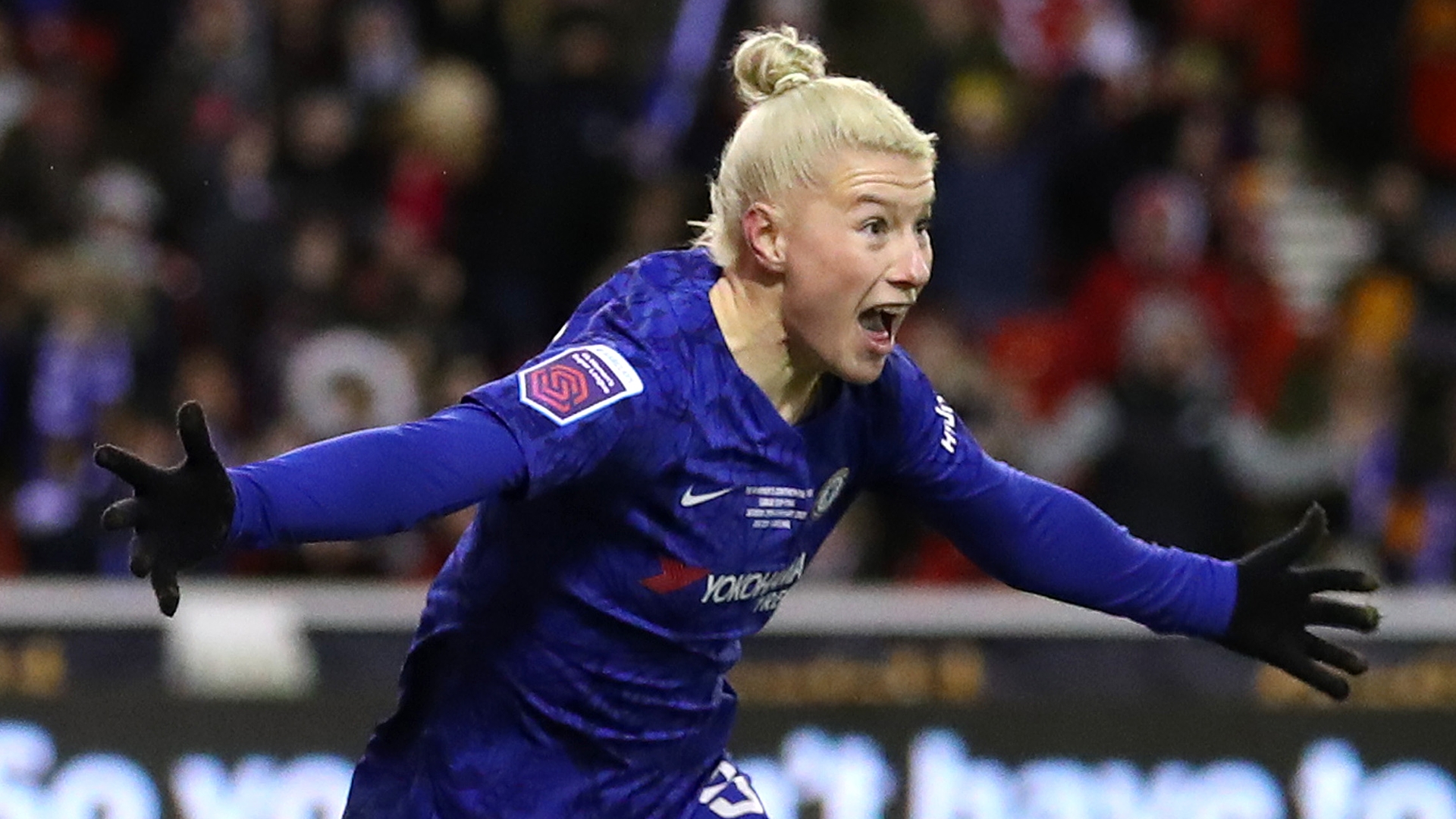 After struggling when she joined and being forgotten by many when Sam Kerr arrived, the 25-year-old was the star of the show in the win over Arsenal

“When you come up against the bigger clubs, like Arsenal and Man City, there’s going to going to be that bit more pressure.

“It’s all about who handles the occasion the best.”

In Saturday's Continental Cup final programme, Chelsea striker Beth England made it all sound so easy. Anyone wanting the secrets behind the Blues’ incredible season so far would have been left wanting.

Victory over Arsenal secured the first piece of silverware of the season for Chelsea. It was their first ever Conti Cup trophy, banishing a demon that Emma Hayes’s side have struggled with since the competition’s inception.

That it was England who scored both goals - including a stoppage-time winner - in the 2-1 win was fitting.

The 25-year-old has made her mark in every ‘big’ game Chelsea have had this season.

Against Manchester City last week,  she fired a rocket into the top corner from 30 yards in a 3-3 draw. Last month, in Chelsea’s 4-1 demolition of Arsenal,  she opened the scoring with a lovely curled finish.

In December, she equalised against Manchester City and then assisted Maren Mjelde for the winner, both goals coming within the last 15 minutes of the game.

And against Arsenal back in October,  it was her strike that levelled the scores and started the Blues’ comeback as they dealt the Gunners their first loss of the season.

It’s incredible to think that when England first arrived from Doncaster five years ago, she struggled to the point that she didn’t think she’d make it at Chelsea.

After scoring three times in four starts in 2016, she didn’t find the net in six the following year and found herself returning to the north to join Liverpool on loan.

“It was a tough journey because, in my head, any player that gets loaned out, you think that your manager doesn’t want you,” she said earlier this season.

“But it was changing that mindset and showing you that I can be the player that you need me to be and thankfully I did that.

“I was really proud of way I handled it and managed to get back into the Chelsea squad - and now I’ve got the nine shirt.”

The first goal goes to the BLUE side of London 🔵 @Bethany_Eng15 doing what she does best! #ContiCup pic.twitter.com/81tJYHwtes

After netting 10 goals in 16 league games for the Reds, England bagged 12 in 12 starts for Chelsea the following year and this season she has 14 in 15 in the Women’s Super League. She now also has a cup-winning final strike to add to her impressive CV.

The switch in mindset is evident.

“There were some great players in that squad then, especially the forwards, so it was quite difficult,” she said, reflecting on when she first joined the club.

Last month, speaking about the current competition for her place, she told Goal something much different.

“It is something that I am enjoying and I am thriving on," she said. "It just makes us all better players together because we are all fighting for our position in the team so it stops complacency. We keep pushing forward."

When Sam Kerr arrived in January, Chelsea were playing with England as a lone striker. Many were quick to think that she’d vacate that position for Kerr and struggle to get into the team.

That Hayes changed to a system with two strikers instead, accommodating both, tells you just how good England has been.

It’s a system that certainly leaves Chelsea a little more open, seen by the plethora of chances Arsenal created in Saturday's final.

But when you have a three-time NWSL Golden Boot winner in Kerr, and arguably the most in-form No.9 in the country in England, how do you leave one out?

This was Chelsea’s 25th game of the season. They’ve won 21, drawn three and lost one – that being a penalty shootout defeat to Reading in the Conti Cup group stages.

Take England’s goals out of the equation and it would read 18 wins, four draws and three defeats. They’d also be 10 points worse off in the league – a league in which they currently hold the upper hand in in the title race.

Crucially, they’d also be without their first ever Continental Cup.