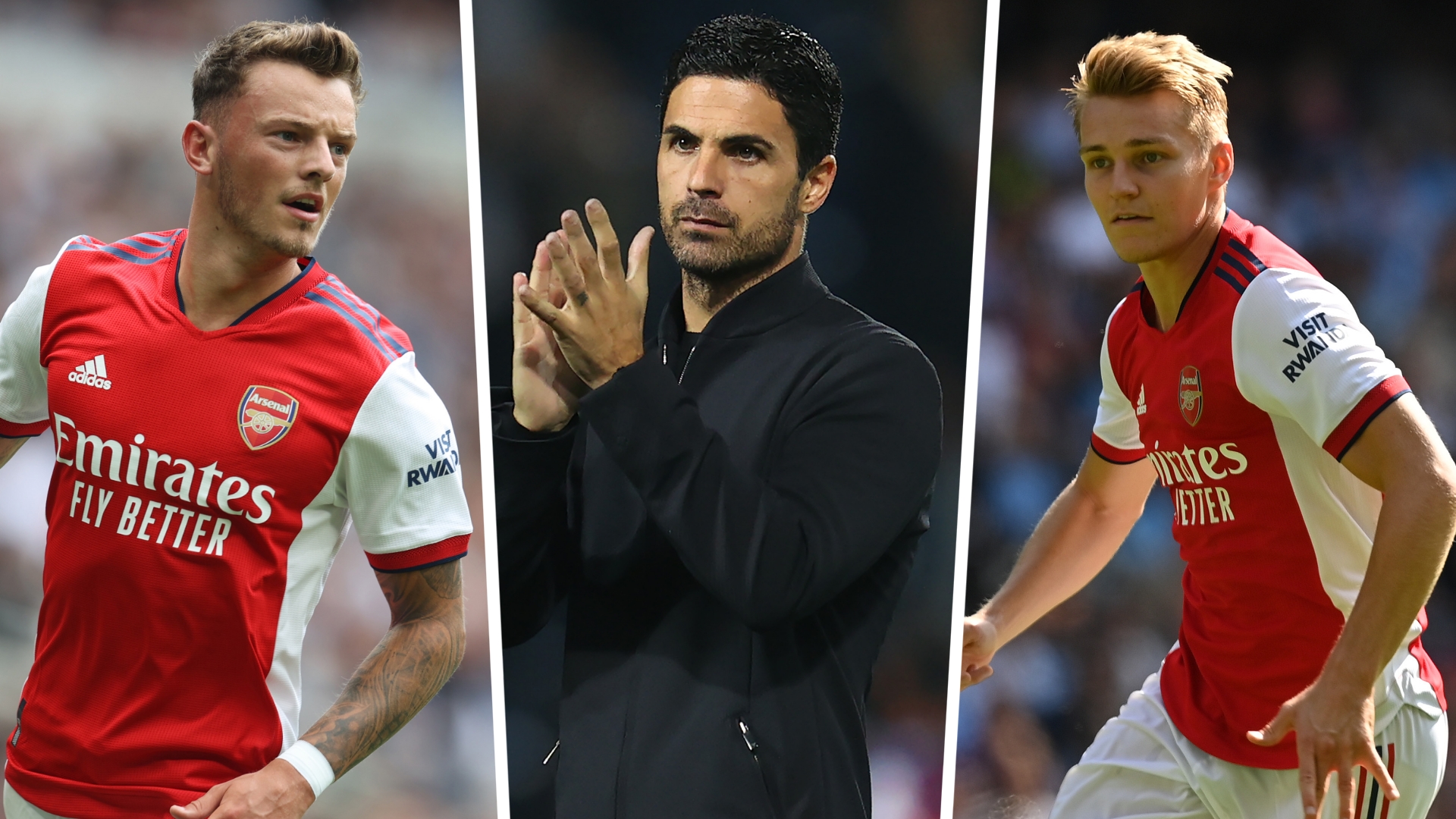 The Gunners spent more than any other Premier League side over the past three months - but have they done enough?

Mikel Arteta said in March that Arsenal’s summer had the potential to be "unprecedented", and he was proven right.

The Gunners spent around £145 million ($200m) over the course of the past three months, the club’s largest ever outlay on players in a single transfer window.

And there were even more outgoings, with large swathes of the squad being moved on, although the only permanent deal saw Joe Willock sold to Newcastle for a deal which could total £25m ($34m).

So it has been a hugely eventful summer at the Emirates Stadium, with Arteta and technical director Edu clearly focusing on revamping Arsenal’s squad by bringing in young players who will hopefully improve over the next few years and become mainstays in the team.

They went into the window wanting to sign a right-back, a right sided centre-back, a playmaker and natural back-up for Kieran Tierney, and they did all that, while also bringing in a talented central midfield and a goalkeeper they believe can compete with Bernd Leno for the number one jersey.

One area they did not strengthen, however, was in central midfield. It looked like they would, with Granit Xhaka seemingly bound for Roma. But when the move failed to materialise, the club decided to stick with Xhaka and to hand the Switzerland international a new contract instead.

Arsenal's most expensive new recruit of the summer was White, with the centre-back arriving from Brighton for £50m.

This is a deal that has generated plenty of discussion, with the price tag a source of much debate.

There is no doubt that White is a talented defender, but with Arsenal desperately needing to add a bit more creativity and goal threat going forward, the wisdom of spending such a vast amount of money on a centre-back has rightly been called into question.

But Arteta wanted a right-sided centre-back as a matter of urgency following the departure of David Luiz, and in White they have landed a 23-year-old with huge potential. The England international is excellent with the ball, reads the game well and looks a perfect fit for the system Arteta plays.

Odegaard, meanwhile was always a priority for Arsenal this summer following his loan move last season, and will fit in seamlessly into the No.10 role.

For £30m, the former Real Madrid man should prove to be a shrewd piece of business by Arsenal, and Arteta will hope he can link up well with Emile Smith Rowe and provide the sort of creativity his team need to become much more of a threat in the final third.

The capture of Ramsdale from Sheffield United has divided opinion, with many believing the 23-year-old keeper was vastly overpriced at an initial £24m, a price tag which could eventually reach £30m if he goes on to become No.1 and triggers various bonus clauses.

Arsenal knew they needed a 'keeper, with Leno now down to the final two years of his contract. There were cheaper options, such as Andre Onana at Ajax, but ultimately they opted for Ramsdale.

Tavares arrived for a relatively modest £8m to provide much needed backup for Tierney while the talented Lokonga, signed for an initial £15m ($21m) from Anderlecht, has shown glimpses in the opening games of the season that suggest he will provide able cover and competition for Xhaka and Thomas Partey in central midfield.

Arsenal’s last signing of the summer was confirmed just 15 minutes before Tuesday’s 11pm deadline, with Tomiyasu joining from Bologna in a £16m ($22m) deal.

The Japan international has signed as a right-back and is expected to be Arteta’s first choice in that position, but he can also play at both centre-back and left-back, so will add versatility to the squad.

A major clear out was expected at Arsenal this summer and that is exactly what happened, with large numbers of last season’s squad moving on.

Only one of those departures, though, generated any funds, with Willock returning to Newcastle for £25m after his successful loan spell at St James’ Park last season.

The rest of the deals done either saw players released, such as David Luiz and Mustafi, while others went out on loan.

Some of those, such as Mavropanos - who joined Stuttgart - and Guendouzi - who joined Marseille - have options included which will see the moves become permanent should the players meet some very makeable clauses during their time away.

Provided Stuttgart do not get relegated from the Bundesliga, Arsenal will receive up to £5m ($7m) for Mavropanos, while they will pocket around £10m ($13.8m) for Guendouzi next summer.

Fiorentina, meanwhile, paid a loan fee of around £1m ($1.4m) to take Torreira for the season, and have the option to make that move permanent at the end of the season for around £13m ($18m).

The deals which took Saliba to Marseille and Bellerin to Real Betis are straight loans and do not have any options to buy included in them.

Bellerin’s move was completed on deadline day, and he was joined by Nelson and Runarsson in heading out the door during the final hours of the window.

Nelson signed a one-year extension to his contract, keeping him at the club until 2023, before joining Feyenoord, while fourth-choice 'keeper Runarsson joined OH Leuven in Belgium for the season.

Arguably the most notable outgoing of the summer, however, was Willian.

The Brazilian still had two years left on his contract in north London, but after a disastrous first season at the club, he agreed during talks to cancel his contract early so he could join Corinthians on a free transfer.

In doing so, Willian is believed to have saved Arsenal around £20m ($27.5m) in wages over the course of the next two years.

Arsenal had been hoping to move some others on during the summer, including Eddie Nketiah. They had a deal agreed with Crystal Palace for the striker, but the move failed to materialise due to disagreements about personal terms.

Xhaka was close to joining Roma, but the Italian club refused to meet Arsenal’s asking price of around £17m ($23.5m), while Sead Kolasinac has been available all summer.

His wages - which are around £100,000 ($138,000)-a-week - have put clubs off, however, and the Bosnia-Herzegovina international may now see out his final year at Arsenal before leaving on a free transfer next summer.

Two of Arsenal’s best bits of business of the summer were the new contracts handed out to Smith Rowe and Tierney.

Both players are key to Arteta’s future plans and agreed new five-year deals during the transfer window.

Prior to signing his new contract, Smith Rowe was the subject of intense interest from Aston Villa - with Arsenal rejecting multiple bids from the Midlanders for their playmaker.

There was never any temptation to cash in on the academy graduatem and there was always confidence he would sign a new deal, which he did while also taking on the No.10 shirt.

Xhaka also signed a contract extension once his move to Roma fell through.

The Switzerland international still had two years left on his current deal, but is now tied down until 2025.

It is extremely difficult to assess what Arsenal have done in the transfer window this summer, because the nature of their signings means it could be two or three years before we truly get to see how good they are.

They have spent big money, more than anyone else in the Premier League, but they have spent it on potential rather than proven players.

Whereas Manchester City and Chelsea have splashed the cash to bring in one proven, established names such as Jack Grealish and Romelu Lukaku, Arsenal have spread the money around on six young players who they believe will significantly strengthen the squad over the coming years.

Whether they will strengthen the team immediately, however, remains to be seen, and after two successive eighth-placed finishes in the Premier League, fans understandably want to see improvement right away.

One area Arsenal should have looked to improve and did not was in central midfield. They had a golden opportunity to move Xhaka on and bring in a new partner for Partey, but they failed to take it and inexplicably handed Xhaka a contract extension.

That feels like a huge opportunity missed to improve an area of the pitch where they have been second best for years. It also still feels like they are a striker light going into the new season.

So while they have been the Premier League’s big spenders, there are still major question marks over what Arsenal have done this summer and it makes it difficult to grade their work any higher than a C at this stage.

It does look like they had a clear transfer strategy when you look at the players they brought in. They are all aged between 21 and 23, which shows the type of squad Arteta and Edu are trying to build.

With the departures we have seen this summer, the squad does now have somewhat of a new look, although Edu’s failure to bring in guaranteed cash for some of those players does leave a black mark next to his name.

Arsenal’s technical director went into the window with question marks over his future, and those still remain today after the work he has done and the money he has spent.

The Gunners have invested in potential, and given the awful start to the season they have endured, you feel that both Arteta and Edu will need to start seeing results quickly if they want to remain in their roles to see that potential realised.

If the pressure was not on before this summer, it certainly is now.