The kit has changed, some of the faces too. But Liverpool under-18s remain the same: value for money.

“Yeah, you get goals when you watch us!” laughs coach Barry Lewtas, reflecting on a positive start to the new campaign.

Liverpool’s youngsters have won two and drawn one of their opening three fixtures, scoring 10 times in the process.

A continuation, then, of their form from last season.

“It’s a good start, but still loads to do,” says Lewtas, settling down for an exclusive chat with Goal at the club’s Academy in Kirkby.

This is Lewtas’ second season as under-18s boss, having replaced club legend Steven Gerrard last summer. They were big boots to fill, but he can be proud of his efforts to date. He learned fast, and delivered success.

In April, his side won the club’s first FA Youth Cup in 12 years, and they only missed out on the Premier U18 League title to Derby on goal difference.

Now, though, there must be a reset. Things change quickly in youth football.

On the opening day of the season, Liverpool beat Blackburn 7-1 away from home. Only two members of the FA Youth Cup winning team – Leighton Clarkson and Jake Cain – started the game. The rest have either moved up to Neil Critchley’s under-23 team or, in the case of influential defender Rhys Williams, headed out on loan.

In addition, Lewtas’ assistant, Scott Mason, has joined Gerrard up at Rangers. Jonathan Robinson is his replacement. Much has changed, even if the demands of the role haven’t. 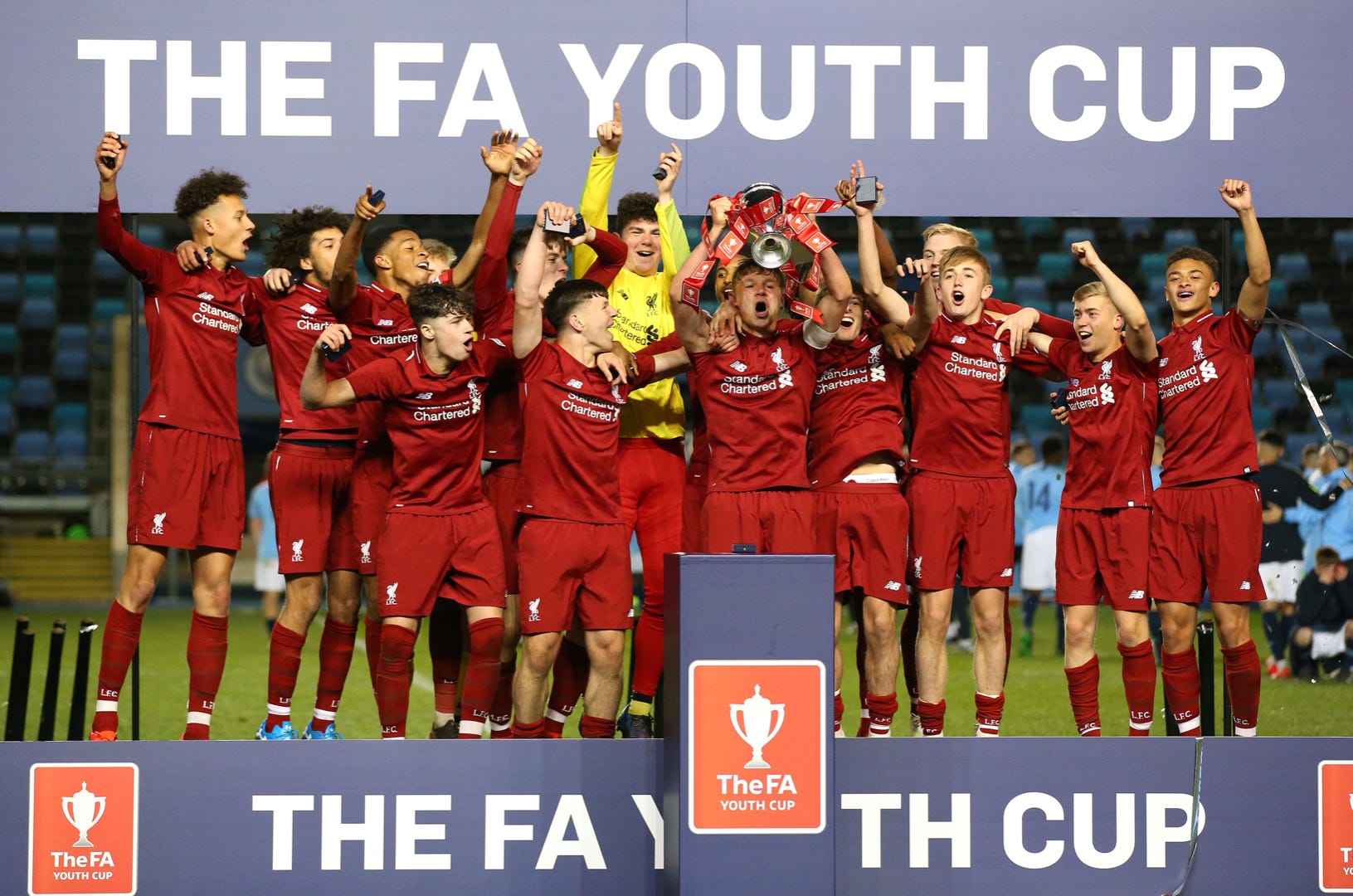 “That’s the job,” Lewtas says. “Youth team football is unusual, because you pretty much have a different team every year and you have new challenges and obstacles.

“It’s an exciting part of the job because there’s no complacency there. You turn back up on July 1 and you have to go again with a new team, a new group. You have to start creating that environment, those day to day habits all over again.

“The aim is the same, just as it was last year. The aim was to get as many players as we could up to the under-23s, and that doesn’t change. We’re here to provide for Critch, and then Critch hopefully provides for the first team.”

Liverpool, of course, is a club which loves its home-grown prospects, and there is genuine excitement at the clutch of youngsters gathering at Anfield right now.

The likes of Rhian Brewster, Harvey Elliott, Sepp van den Berg, Ki-Jana Hoever, Curtis Jones and Adam Lewis – all 19 or younger – are on the cusp of the first team, while Yasser Larouci and Bobby Duncan picked up senior experience during pre-season, heading to America with Klopp’s first team.

Lewtas watched their progress with interest – "I was more nervous then than I was for the Youth Cup final!" he laughs – and was devastated when Paul Glatzel, his Youth Cup winning captain, ruptured his cruciate ligament playing for the senior side at Tranmere in July. Glatzel will undergo his rehab at Melwood, such is the esteem with which he is held.

Behind those players, a new group will take over the baton at under-18 level. And the early signs there are equally promising.

Striker Layton Stewart, for example, is already talked about as a player of huge potential, and has started the season in impressive form, with three goals in as many games – the latest of which was a wonderfully deft winner against Stoke.

Lewtas has also been encouraged by what he has seen from his other first-year scholars.

“Layton is the one who has scored a few goals and got a bit of attention,” he says. “He’s a Huyton lad who has been with us a long time. He’s hit the ground running, which for any No.9 is ideal, it’s what you want to do.

“For us, the journey is a long one. There are plenty of parts he needs to improve, but in fairness to him he’s been attentive, he’s bought in from day one and he’s listening every day. That’s paying dividends so far, and hopefully that continues.

“Elsewhere, we’ve a new centre-back in Billy Koumetio, who is a really good personality. He’s really strong in terms of how he wants to defend, with aggression on the front foot. And he wants to get better, which is important when you’re adding new players into groups. You’d think he’d been here for years and his performances have been really good.” 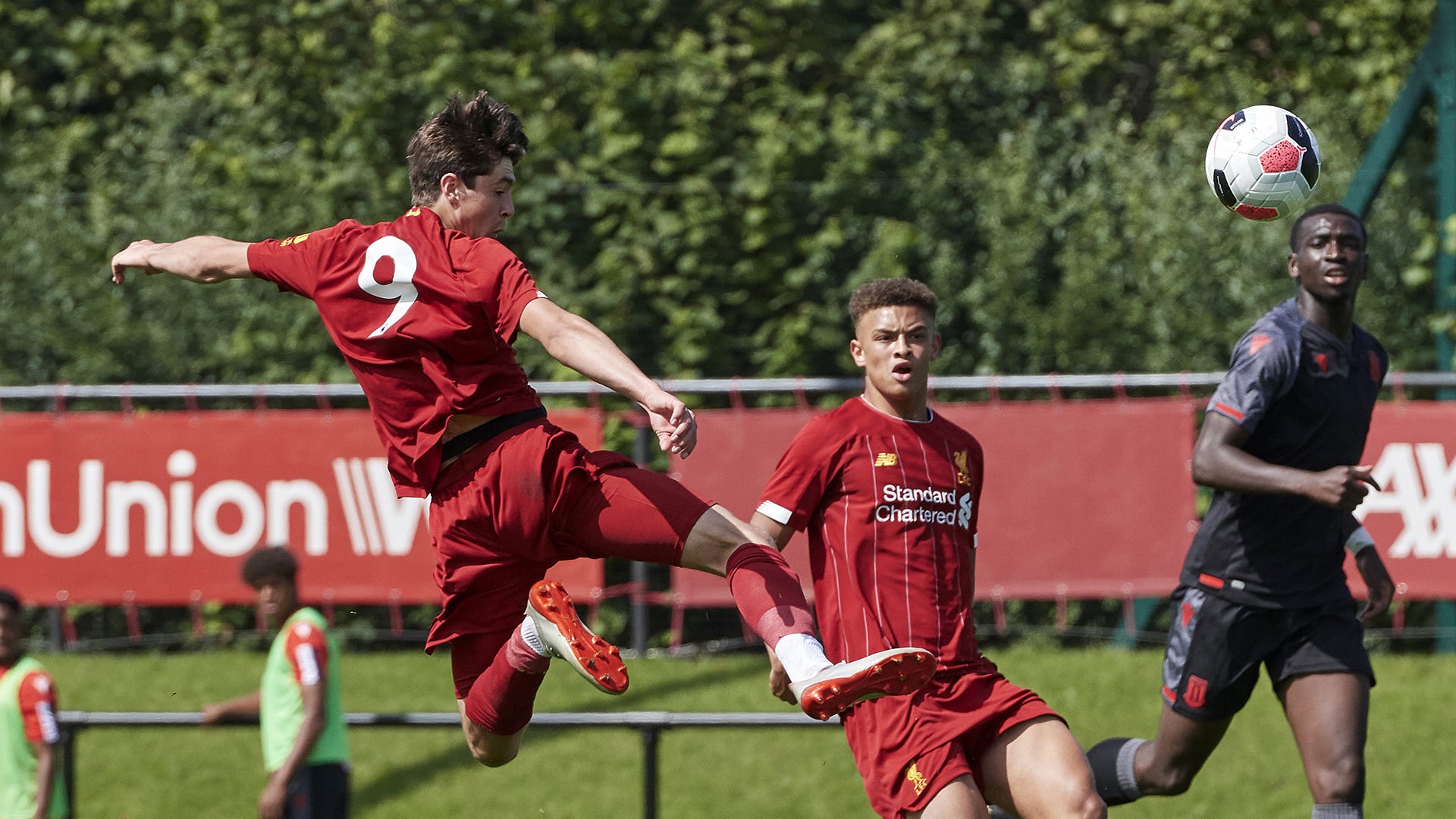 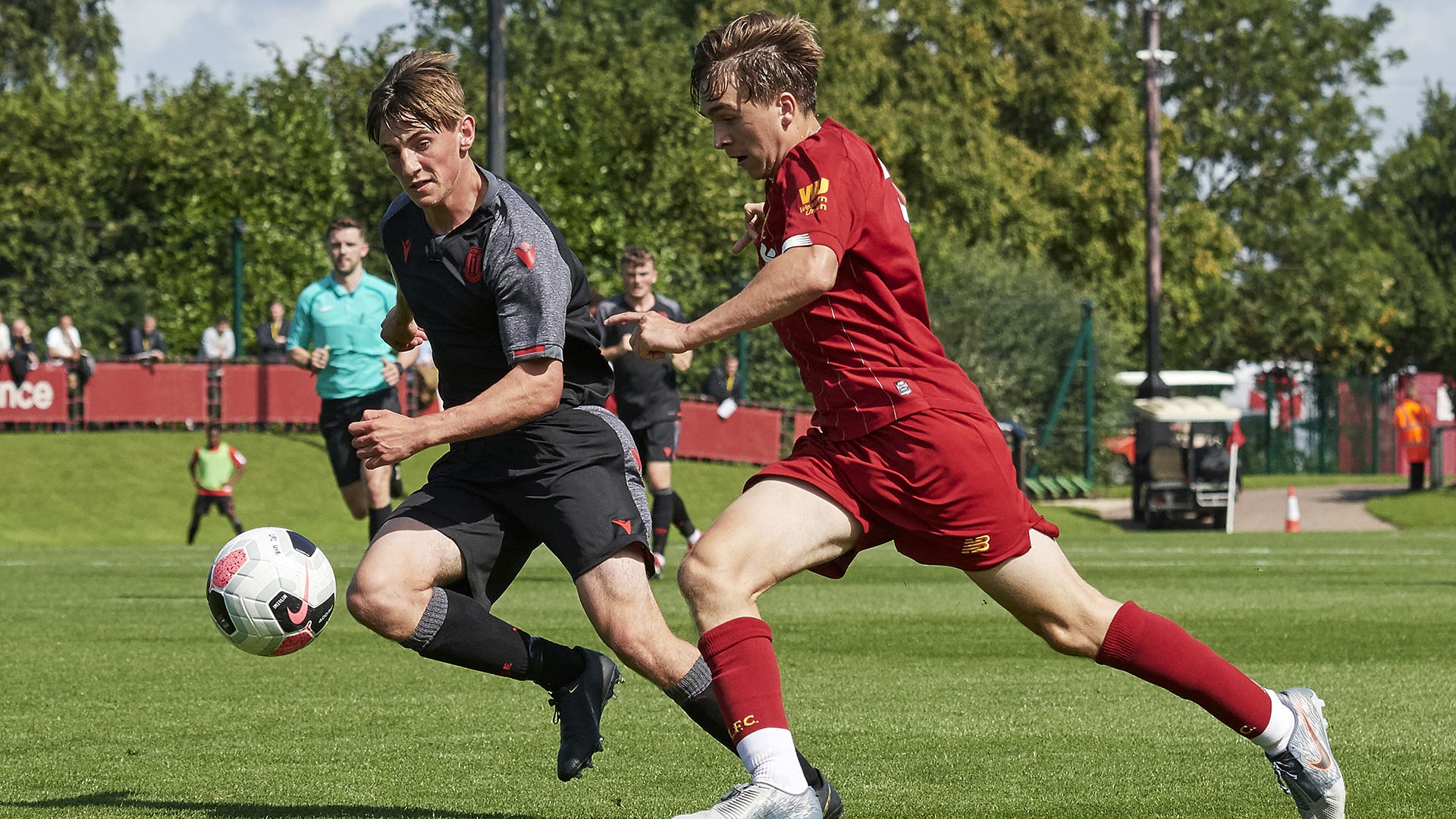 “Tom Hill is an old-fashioned box-to-box midfield player who has scored a few goals too. He reaps his rewards for running forward, because he doesn’t stop. Credit to him, he’s contributing with goals and assists, affecting games at both ends of the pitch.

"The same goes for James Balagizi, who is more of a midfielder but has been playing a bit as a loose No.9 alongside Layton.

"They bounced through the door on the opening day and haven’t looked back." 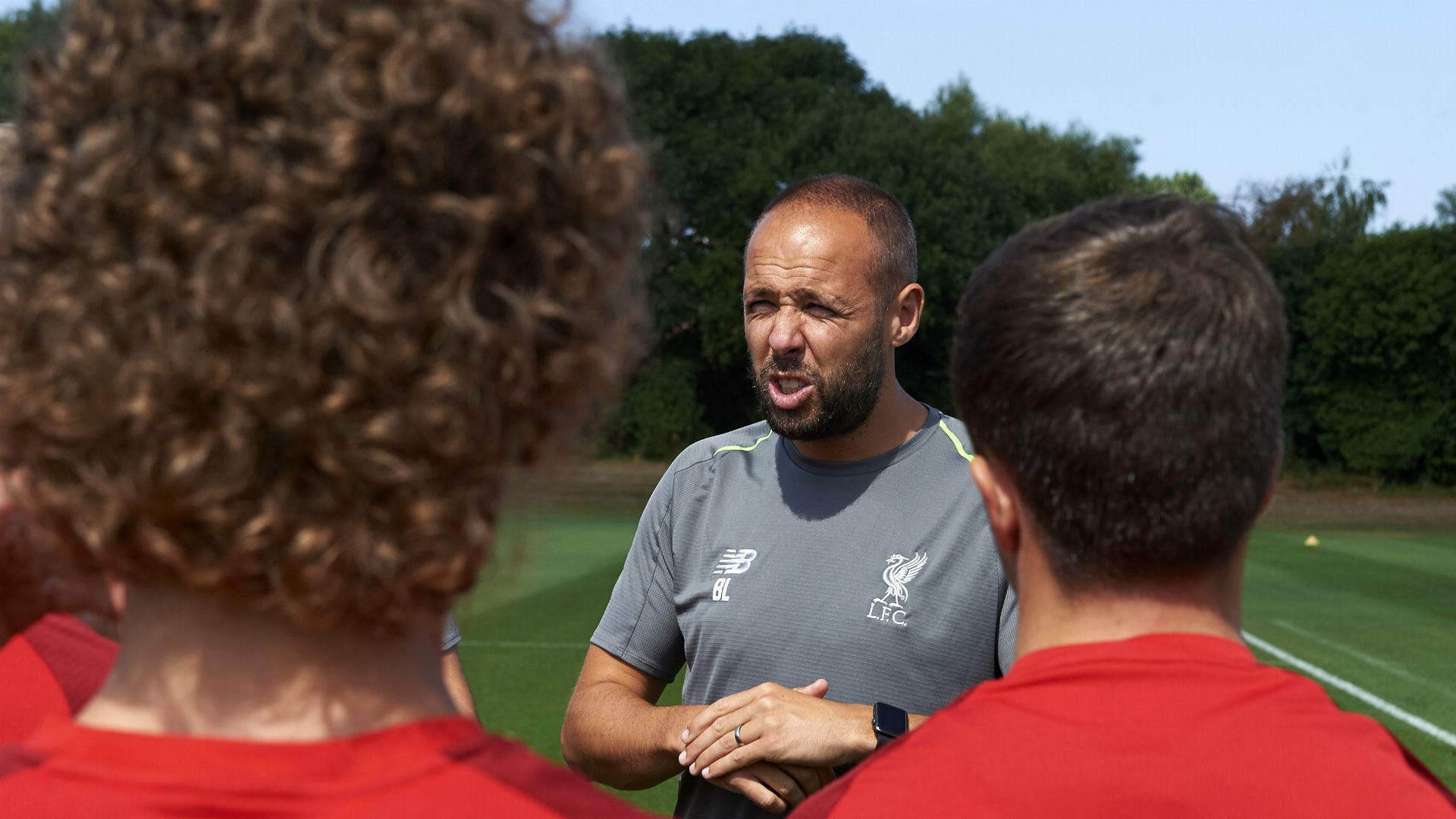 As for Lewtas, he’s in no mood to look back either. He was proud to become a Youth Cup-winning manager, but knows that his work is not judged on silverware but on the development of players and of people.

As Alex Inglethorpe, Liverpool’s Academy director, told Goal in May: “I don’t care about outcomes, I care about processes.”

“It’s a balance,” Lewtas says. “How can I tell the boys that trophies don’t matter, when they’re thinking about a final on national TV, or a semi-final at Anfield or trips abroad in the UEFA Youth League? The lads want to prove they can compete and win.

“But for me, it’s about the environment you create, day in and day out. It’s about the standards we set in training, and how that enables the boys to develop. We’re here to build good footballers and good people, and if they can win things on the way, then all the better.”

And with that, he is gone. Off to a meeting with his players, who listen intently to their coach.

Liverpool's future, we can safely say, is in good hands.