Spain goalkeeper and captain Iker Casillas added the Golden Glove award to the World Cup 2010 trophy after guiding his team to glory against the Netherlands.

MORE...
The Real Madrid shot-stopper conceded only two goals all tournament, the first coming in a shock 1-0 defeat to Switzerland in Spain's first group game, the second in the 2-1 group win over Chile, but went on to keep clean sheets in all of his remaining games.

The 29-year-old shed tears at the final whistle of Sunday's game after leading his side to their first ever World Cup triumph, a feat which will surely see him go down as a hero of Spanish football.

Casillas captained his country to their first ever World Cup final and subsequently was the first Spaniard ever to lift the trophy. The Real Madrid man was solid for La Furia Roja throughout and didn't let in a single goal throughout the knockout stages. He played every minute for Vicente Del Bosque's men and made a total of 17 saves.

FIFA did not list any runners up but a number of names deserve credit: Germany's Manuel Neuer only played 550 minutes after his side were dumped out in the semi-finals, but made an impressive 22 saves. It could have been different had Frank Lampard's goal been properly awarded, a shot that beat Neuer from the edge of the area, but the young keeper impressed throughout with mature displays.

Maarten Stekelenburg came as close as any other keeper to lifting the World Cup, but was beaten by match-winner Andres Iniesta in the final. The Netherlands keeper did, though, make more saves than Casillas during the tournament - 19 in total - but only managed to keep two clean cheets.

Once the knockout stages started Casillas kept it tight, and produced the goods when it mattered, his most important moment came twarting Arjen Robben in the final with a brilliant one-on-one save. He also kept his side in the quarter-final with Paraguay by saving - and holding onto - an Oscar Cardozo penalty. 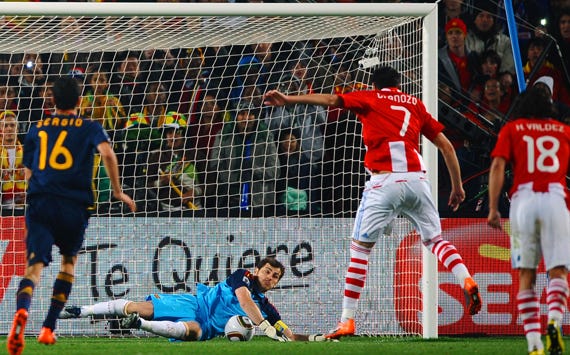 Oscar winner | Cardozo penalty save kept Spain in it

Although Real Madrid broke all sorts of records this season, they still finished second behind the irrepressible Barcelona in La Liga. He let in 34 goals in the league, but made an impressive 105 saves as Real pushed Barca all the way.

Our  provides the best breaking news online and our  football fan community is unmatched worldwide. Never miss a thing again!