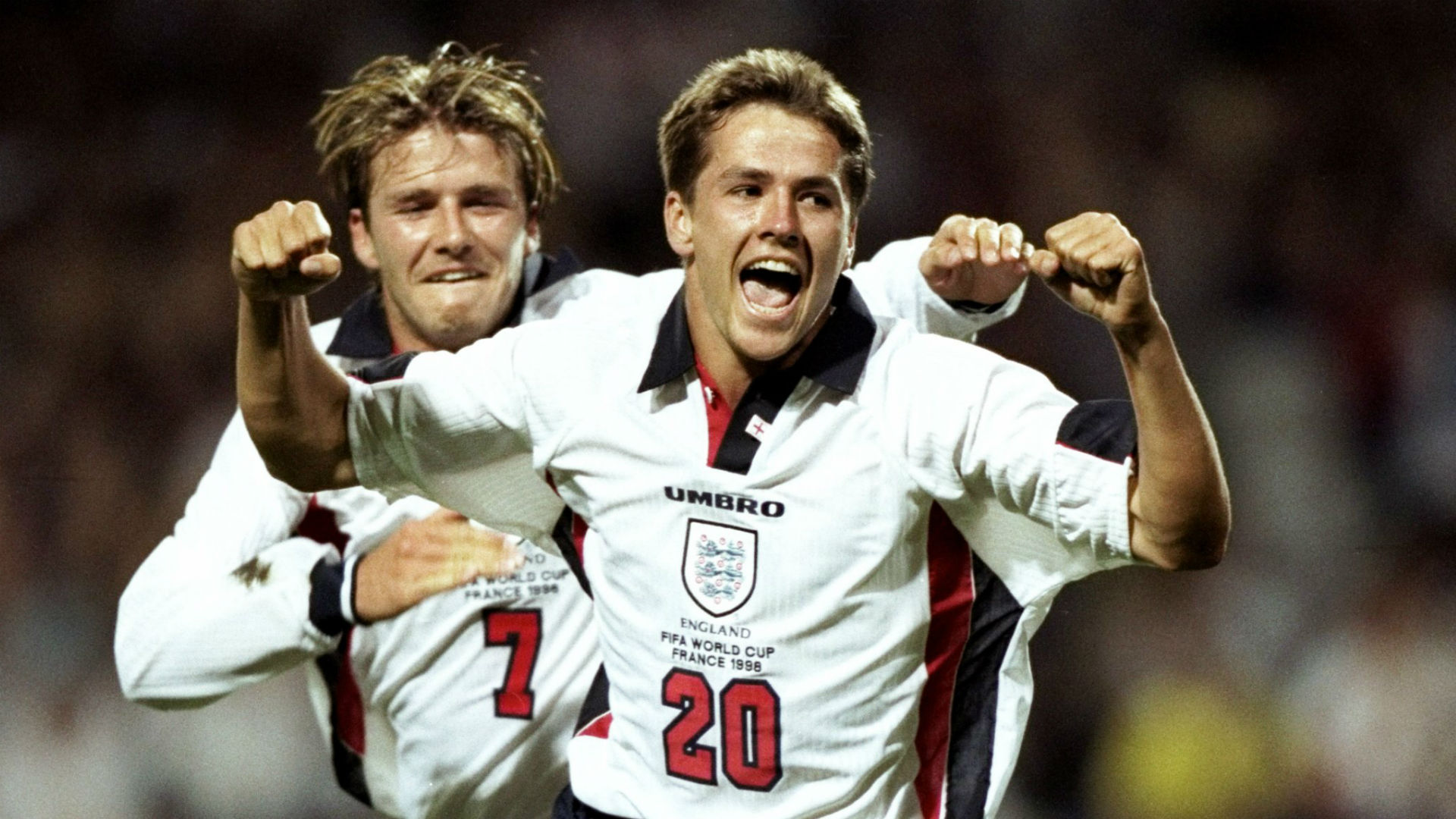 This summer England will attempt, once more, to end decades of heartache as they join 31 other teams and challenge for the World Cup in Russia.

This year notably will also mark 20 years since the 1998 World Cup, which was ultimately a disappointment for the Three Lions and something many England fans would, no doubt, rather forget.

However, it is a topic that is sure to rear its head and, indeed, there are plenty of parallels and talking points.

For example, Gareth Southgate, who played in 1998, is now the head coach; they have been drawn in Group G, as they were in 1998; and there they will come up against Tunisia again.

As the current crop gear up for an assault on global glory, Goal takes a look back at England's 1998 World Cup campaign.

The core of England's 22-man squad for the 1998 World Cup was drawn from clubs such as Manchester United, Arsenal, Liverpool, Newcastle and Tottenham.

Gunners goalkeeper David Seaman was the undisputed 'number one' and he was joined on the trip by Leeds United's Nigel Martyn and Blackbun Rovers shot-stopper Tim Flowers.

Ahead of Seaman, Hoddle was able to call upon a host of talented defenders with Sol Campbell, Tony Adams and Gary Neville among the panel. The current England manager, Southgate, was also involved.

Newcastle's Alan Shearer was the captain of the team and he was partnered by Teddy Sheringham, with Les Ferdinand in reserve.

A 19-year-old Rio Ferdinand, who had made a breakthrough at West Ham, made the cut, as did the precocious Michael Owen (then 18), who was making waves at Liverpool.

At 34, Seaman was the oldest player in the squad, while Newcastle's Rob Lee, who was 32, was the oldest outfield player, followed by Sheringham (also 32).

The announcement of the final squad was not without controversy and the most notable absentee was Paul Gascoigne, who was dropped despite playing a part in qualification.

Gascoigne did not respond kindly to the news of his ommission from the final 22, entering Hoddle's room and causing damage in a fit of rage. The midfielder did not play for his country again.

As well as Gascoigne, Manchester United's Phil Neville missed out, while Everton midfielder Nick Barmby, who scored in qualifying, was also omitted. Injury prevented Arsenal striker Ian Wright from going to the tournament.

Who did England play in the group stage?

England were drawn in Group G of the competition alongside South American side Colombia, fellow Europeans Romania and north African outfit Tunisia.

Hoddle's men secured qualification from the group by finishing second thanks to wins over Tunisia and Colombia, having lost to eventual group winners Romania.

The games took place in June, kicking off on the 15th against Tunisia before the final group game on the 26th of the month against Romania.

Below is a summary of England's 1998 World Cup group games.

The Three Lions made solid start to the tournament, moving straight to the top of Group G thanks to a two-goal victory over Tunisia in Marseille.

Shearer put England ahead shortly before half-time with a powerful header and Scholes added a second in the dying minutes with a spectacular long-range strike.

England's second game ended in disappointment against a Gheorghe Hagi-led Romania as they succumbed to a late Dan Petrescu goal.

Hoddle's men went behind shortly after the restart when Viorel Moldovan eluded Adams and Seaman to score. They looked set to lose, but teen sensation Owen struck with nine minutes to go.

However, the Liverpool striker's goal was rendered obsolete when Petrescu outmuscled his Chelsea team-mate Graeme Le Saux to snatch victory on the 89th minute.

England went into their final game of the group needing a win to ensure their passage into the knock-out stage and they stepped up to the mark with a comfortable win.

Hoddle made some changes for the match with Beckham coming into the midfield for David Batty, while Owen was handed his first England start, replacing Sheringham to partner Shearer.

Anderton fired the Three Lions ahead after just 20 minutes, rifling home from close range and Beckham doubled their advantage less than 10 minutes later with a trademark free kick.

Having finished second to Romania in Group G England were paired with the winners of Group H - Argentina - in the last 16.

The Albiceleste won all their group games without conceding a single goal, overcoming Japan, Croatia and Jamaica, so they came into the knock-out stage full of confidence.

The two teams had clashed in the past on the field - Diego Maradona's infamous 1986 'Hand of God' comes to mind - and their countries had been at war, so it was somewhat of a grudge match.

Daniel Passarella's side boasted some of the best attacking players in the world in 1998 and were considered to be among the main challengers for the trophy in France.

They wasted little time asserting themselves and took the lead from the penalty spot on five minutes, with Gabriel Batistuta dispatching past Seaman to score his fifth goal of the competition. However, the lead didn't last very long as Shearer hit back four minutes later, also from the penalty spot.

Having equalised so quickly after going behind, England appeared to find some momentum and they added a second on the 16th minute when Owen scored what was then a career-defining goal. The then-18-year-old deftly controlled a long-ball before beating two defenders and firing into the top corner.

The Three Lions seemed to be in control of the tie but Argentina left them flummoxed just before half-time when Juan Sebastien Veron's clever free kick found Javier Zanetti unmarked in the box and the Inter full-back blasted beyond Seaman to level matters.

England's task grew increasingly difficult just two minutes after half-time when Beckham was sent off for kicking out at Argentina captain Diego Simeone, a senseless act that would see the midfielder vilified in his home country for a number of years thereafter.

Despite the numerical advantage enjoyed by Argentina, the game went into extra time and finished 2-2, meaning that penalties were required to determined which team would progress to the quarter-finals of the competition.

England had already experienced penalty heartache in 1990 and 1996 against Germany and, unfortunately for them, their nightmare affliction continued in Saint-Etienne.

Carlos Roa was the hero for Passarella's side as he stopped Paul Ince and ultimately David Batty, ending English World Cup hopes.

Then 23, Beckham had begun the tournament as a substitute but forced his way into Hoddle's first XI after a number of impressive performances and the Argentina game was his 18th cap. Joined by Ince and Scholes in the midfield, he was up against formidable opponents in Simeone, Veron, Matias Almeyda and Ariel Ortega in the last-16 game.

Beckham had performed reasonably well in the first half, but he lost his composure just two minutes after the break when he tangled with the more experienced Simeone. The Argentine midfielder committed a foul on Beckham from behind, knocking the Englishman to the ground before falling on top of him.

After Simeone got up, Beckham, who was still on the ground, swung his foot out at the Argentine, striking him on the back of the leg, which seemingly caused him to fall over. The whole incident played out directly in front of referee Kim Milton Nielsen, who did not hesitate in showing Beckham the red card.

Following England's elimination, Beckham was immediately apologetic, describing the sending off as "without doubt the worst moment" in his career and acknowledging that he had let his team-mates down. However, his apologies did not spare him from vilification.

Some opinion polls found that fans did not want to see the midfielder don a Three Lions shirt ever again, while a number of newspapers got in on the act, with the Daily Mirror providing a custom-made dartboard cover with Beckham's face on it to their readers. An effigy of the player was even made and hung in London.

Some years later, Simeone admitted that he "took advantage" of Beckham's petulance to get him sent off.  "I think anyone would have taken advantage of that in just the same way," Simeone told the Observer. "Sometimes you get sent off, sometimes you don't. Unfortunately for the English team that time they lost a player."

Beckham's moment of redemption came four years later at the next World Cup when England faced off against Argentina in Japan. By then England captain, he scored from the penalty spot to give Sven-Goran Eriksson's side a 1-0 victory. After that, the pair buried the hatchet.

"Simeone tried a few mind games to put me off before I took that penalty, but I expected that. It is all part of football," Beckham told the Sun. "But then he showed me what a gentleman he is by coming up to me at half-time and then again at the end of the game and shaking my hand."

He added: "There is no lingering grudge between us - just mutual respect between people who regard each other as good players and professionals."