What is an own goal? Greatest examples, definition & players famous for conceding them 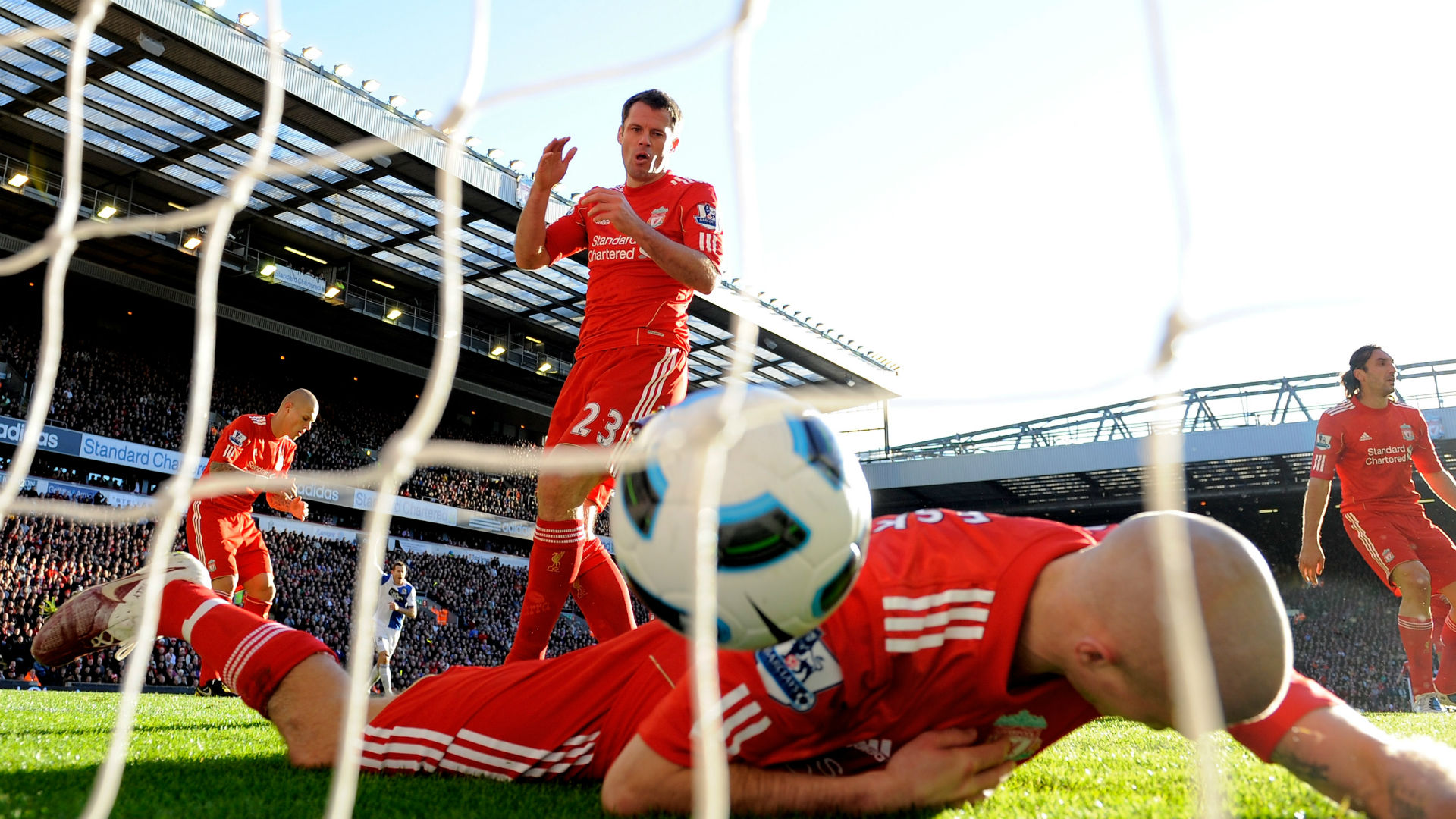 The scourge of well meaning defenders everywhere, own goals happen from time to time every season - we take a look at some of the notable cases

Own goals are the stuff of nightmares for footballers and particularly so for defenders, whose main job is to preserve the integrity of their own net by keeping clean sheets.

As soon as a player scores an own goal they morph into on-field pariahs, embarrassment etched on their faces as they come to terms with the immediate guilt of it all and try to persevere.

Some players crumple beneath the shame, eager to hide from the judgement of their team-mates and the thousands of fans in the stadium, not to mention the millions watching at home. Others hold their heads up, accept their mistake and soldier on.

It truly is a test of character at any level of the game, but what exactly is an own goal? a look at the act which keeps defenders up at night and the players who made a habit of scoring them

is an own goal?

The term 'own goal' (sometimes referred to as an 'OG') is used to describe the a player accidentally or deliberately puts the ball into their own net.

Own goals can arise out of a misjudgement, such as when a player attempts to head the ball to their goalkeeper or put the ball out of play, or when a player is the victim of a wicked deflection or freak incident.

Crediting own goals can occasionally be contentious, particularly in the case of deflections, when the ball ricochets off a player and into the net.

By its very an own goal is a counter-productive thing and, interestingly, the term has slipped into general use outside of football to denote when something has backfired on an individual or a group

As mentioned, own goals are generally a source of embarrassment for the players who concede them. At the same they can also reach hilarious proportions for those watching, particularly if they happen to involve ridiculous miscommunication or an element of slapstick. Not even the best players are immune.

Gareth Bale scored an own goal he knew very little about in 2012 while playing for Tottenham in a game against Liverpool. Aaron Lennon and Bale had given Spurs a 2-0 lead over the Reds and they combined again to provide Liverpool with a lifeline. Lennon's attempt to clear a Steven Gerrard header off the line hit an obstacle in the form of Bale's face and it rebounded into the net. Former Bury defender Chris Brass went one better than Bale though, by actually smashing the ball off his own face and into the goal while attempting to clear the ball in a 2005-06 League Two match against Darlington.

Going back to the pre-Premier League days, Arsenal legend David Seaman was caught out by an unusual Lee Dixon backpass in a 1991 game against Coventry City. As Seaman later recounted: "My old mate Lee Dixon decided to give me an early touch of the ball against Coventry. Unfortunately, it was nowhere near my hands. It was one of the quickest own goals of all time... nice one, 'Dicko'!"

Ajax defender Nicolas Tagliafico put the ball past his own goalkeeper in a 2018-19 Eredivisie game against Emmen. With his side comfortably in control of the game at 5-0, the Argentina international lost concentration and played a firm pass back to Andre Onana, only Onana wasn't there and the ball rolled into the net. Luckily for him, Ajax still went on to win 5-2

defender Kieran Trippier fell victim to an egregious moment of miscommunication in a 2018-19 Premier League game against Chelsea when he completely misread Hugo Lloris' intentions and passed beyond the goalkeeper into the net. Spurs went on to lose the match 2-0, a result which put a major dent in their title hopes.

Former Fulham and Middlesbrough defender Franck Quedrue scored one of the most impressive own goals during his time playing for Lens when his attempted clearance in a game against Bastia sliced dangerously into the air and into his own goal.

In 2015, further down the football pyramid in the Isthmian League, the elements played their part in one of the most unusual own goals ever seen when Thurrock's Duncan saw his clearance carried over his head by the wind and beyond the reach of his goalkeeper. The freak incident went viral and after some disappointment, Duncan saw the funny side.

"At first it was a bit embarrassing and my team-mates were giving me a bit of banter," Duncan told BBC Essex. "But I can see the funny side to it, honestly. At the time it wasn't funny."

Thurrock FC with a wind assisted own goal!https://t.co/PM9whoZizs

Jamie Pollock scored one of the most memorable own goals in the history of English football when he put the ball into Manchester City's net in a 1998 game against Queens Park Rangers. The midfielder showed great awareness to intercept a QPR pass, flicking it over the head of his opponent, but then disaster struck as he inexplicably headed it over his own goalkeeper and into the net. Pollock later revealed that he may have been subconsciously inspired by a DVD of football gaffes he watched the night before the game.

"I don’t know if it was something subconscious in my mind from watching the DVD but I’ll try to blame something, it was just crazy,” he told the Guardian.

“I watched it on and on I tracked my runner, the ball bounced, I’ve actually knocked it over Mike Sheron’s head and then I’ve looked and Martyn Margetson was on his line so I’ve headed it back towards Martyn. As I’ve headed it, he comes running out and the ball’s beaten him and gone into the goal.

"Then it was like: ‘My God!’ It was horrendous and you felt the silence from the crowd; the anxiety grew from there, we kept battling on but couldn’t get the win we needed.”

Of course, it's not always the defender's fault, which Gary Neville found out to his detriment in 2006 while playing for England against Croatia in a Euro 2008 qualifier. The former Manchester United captain played an innocuous pass back to goalkeeper Paul Robinson, but disaster struck as Robinson's attempted clearance missed the ball entirely, allowing it to roll unhindered into his net.

Mario Mandzukic set an unfortunate record at the 2018 World Cup when he became the first player in history to score an own goal in the final of the competition. His header past the grasp of Danijel Subasic brought the overall tally of own goals in that edition of the tournament to 12, which is double the previous record of six at France 1998.

The most infamous own goal in history was scored by Andres Escobar at the 1994 World Cup in the United States. Escobar, who was playing for Colombia, turned the ball into his own net in a group game against the USA and it ultimately cost his team the game as they lost 2-1. More tragically, however, it was said to have directly precipitated his death as he was fatally shot less than two weeks later

with the most own goals

Former Liverpool defender Jamie Carragher is regularly and mercilessly mocked for his own-goal record after breaching his own net seven times in the Premier League, including twice in one game against none other than Manchester United back in 1999.

He also did something else I dreamed of- scored 2 at the Kop End for United ... https://t.co/sExBgnr0k3

Carragher is actually tied on seven own goals with another Reds defender, Martin Skrtel, who bagged four of his in one forgettable season - an unfortunate record that was later equalled by Brighton's Lewis Dunk in 2017-18.

However, while Carragher and Skrtel's tallies of seven each are hefty, the record for most Premier League own goals belongs to former Manchester City captain Richard Dunne, who amassed an incredible 10 during the course of his career in England's top division.

Another Friday the 13th "favourite"... is Richard Dunne's own goal v @WBAFCofficial our unluckiest concession? http://t.co/UreQEEtrHA

Sergio Ramos, Gerard Pique and Phil Jones are among a clutch of players who can lay claim to the record of most Champions League own goals. Each of the conceded two own goals in Europe's premier club competition, putting them along with the likes of Ivan Helguera, Wes Brown and Jeremy Mathieu.

Five players share the record for most La Liga own goals with five concessions . They Sergi Barjuan, Loren, Alfonso Aparicio, Fernando Caceres and Diego Rodriguez. In Serie A, the record for most own goals is held by former Inter and Sampdoria star Riccardo Ferri, who has 12 to his name, with Franco Baresi not far behind on nine.

The record for most own goals in the Bundesliga is shared by former Hamburg defender Manfred Kaltz and Mainz icon Nikolce Noveski, who both hit the back of their own net six times, while Ligue 1's record holders are Albert Cartier and Jean-Guy Wallemme with seven each.