Wisla Krakow, one of Poland's biggest football teams, face a fight for survival thanks to the despicable actions of a hooligan-cum-gangster group

“Teddy Bear” once served jail time for throwing a knife at Dino Baggio’s head as Wisla Krakow hosted Parma in a UEFA Cup tie in 1998.

Eighteen years later, the infamous hooligan and his gang extended their control from the terraces to the boardroom, and amid reports of violence, drug dealing and racketeering brought one of Poland’s biggest clubs to its knees.

On February 19, Jakub Blaszczykowski (pictured further down at the 2018 World Cup against Senegal) played his first game at the Henryk Reyman stadium since 2007.

Having confirmed he would play for his boyhood club for free until the end of the season, Poland’s most-capped player secured victory over Slask with a penalty.

It was an emotional moment for supporters. It came less than a month after the Polish Football Association had restored Wisla’s suspended licence, saving the club from imminent collapse and demotion to the fifth tier of Polish football.

Nightmares of agricultural village pitches evaporated. Instead, the club remains in the Ekstraklasa and is being led into the spring round of Poland’s top league by one of its greatest ever sons.

Having temporarily rescued Wisla with 4 million (£808,000) in loans, Blaszczykowski and a pair of local entrepreneurs are now hunting an investor to finish the job.

They’re selling a club reportedly ravaged by the 'Sharks' – a hooligan-cum-gangster group led by Misiek, as the 39-year-old Pawel Michalski is better known.

As revealed by a documentary broadcast in May by national TV channel TVN, the gang is suspected of decimating Wisla’s finances, abusing and intimidating staff and players, and using the club as a base for criminal activities.

The victory over Slask leaves Wisla in in the Ekstraklasa, a position a depleted team will need to defend whilst the club’s financial future is sorted out.

Several players have left, tired of going months without being paid. In January, the club’s rescuers raised a reported €750,000 (£645,000) by selling wingers Martin Kostal and Jesus Imaz to Jagiellonia Bialystok. The money will go towards reducing the 40m (£7.95m) debt burden so they can secure a licence for next season.

Added to those fees, the loan, and ticket sales, a scheme that raised a further 4m (£795,000) “should allow the club to survive for the near future,” says Jaroslaw Krolewski, who is part of the Blaszczykowski-led group that has been handed managerial control. “We then hope to receive initial offers from strategic investors.” 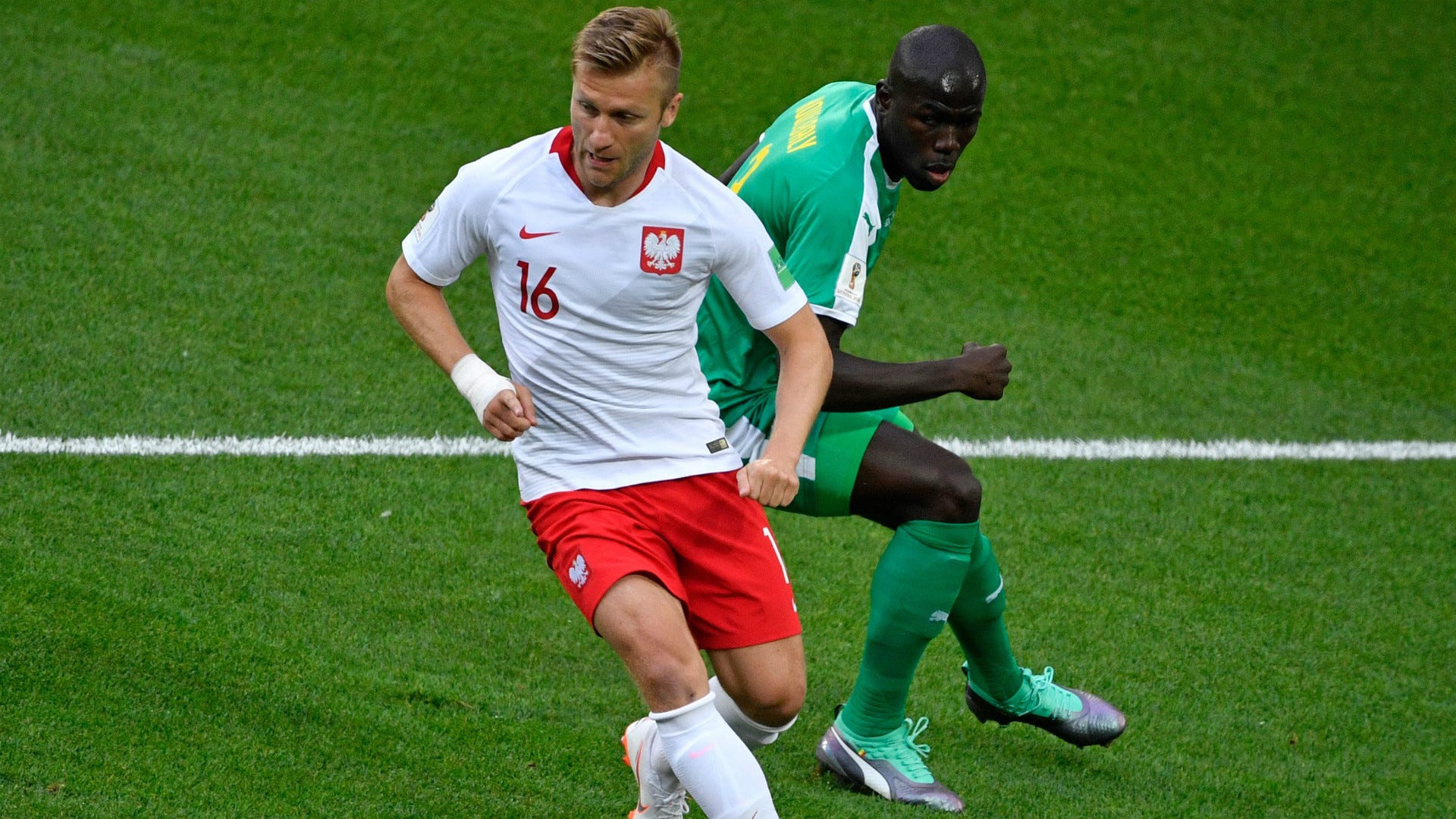 The level of interest will depend on whether Wisla Krakow, which shares Poland’s second city on the Vistula River with fierce rival Cracovia, can be cleansed of the criminal elements.

The Sharks – several of whom have been accused or convicted of “robbery, drug trafficking, organised crime and murder”, according to Szymon Jadczak, the investigative journalist that made the TVN documentary – controlled Wisla’s management board from the summer of 2016.

When chairwoman Marzena Sarapata (pictured below), a lawyer who had previously represented Misiek, was ousted and disappeared from public view at the end of 2018, the club’s bank account contained just 50,000 (£10,000), according to club officials. During two-year reign, Wisla’s debt almost quadrupled.

The cash wasn’t going to players and staff, who went unpaid for months. Instead, huge sums went to the board. On top of that, Jadczak claims the Sharks were using the club to launder the proceeds of drug running and syphoning Wisla’s funds via fake supply contracts.

Sarapata has denied any improper but has not followed up on threats of legal action against TVN and other media outlets that covered the story.

“Lots of money has gone missing,” Krolewski says. “This was an organised crime group controlling the club.”

However, the authorities took little notice, even when the gang’s activities out into the stadium.

Damian Dukat, who was installed as vice-chairman, is reported to have organised an attack on rival fans, handing out flares in the stadium toilets.

Previously manager of a gym at the club that was leased by Misiek for pennies and used to train hooligans in street fighting, Dukat denies the but has failed to follow up on threats of legal action.

Ahead of the derby against city rivals Cracovia, the Wisla team – featuring several Polish internationals – paraded in t-shirts wishing a speedy recovery to 'Dudek', a hooligan on the wrong end of a fight featuring machetes and guns.

Even the arrest of Misiek and several others on organised crime charges in October didn’t fully attract the attention of police and prosecutors towards the club. However, the Sharks become more blatant with their actions, apparently seeking to drain as much as possible out of the club before it all came tumbling down.

That day came in late December, with the collapse of a farcical takeover deal.

Vanna Ly, a French-Cambodian “billionaire” arrived in Poland on an EasyJet flight to agree a zl1 (£0.2) deal for Wisla with Sarapata. He went to Luxembourg but lost his phone, and therefore access to the 12.2m (£2.4m) he was due to wire to Wisla’s accounts in order to pay off the most urgent debts by December 28.

Dispensing with the services of the budget airline, he climbed aboard his private jet to travel to New York to arrange the but suffered a heart attack. He has not been seen since.

The debacle sparked police raids at Wisla in January. Prosecutors say they are now investigating financial crimes and abuse of office by the former management board.

They face a tangled web of informal networks. TS Wisla, the wider sports association that runs several Wisla sports teams, bought the football club in 2016. The TS board at the time was controlled by fan group SKWK, which until January was handed zl1 (20p) from every matchday ticket sold. The Sharks, in turn, controlled .

“Members of the TS Wisla board were directly connected with the hooligans via SKWK,” claims Jadczak.

TS Wisla still owns the club, and the Sharks are believed to continue to exert their influence.

But figures at Wisla Krakow insist they want to concentrate on matters on the pitch. The return of Blaczszkowski after 12 years in the Bundesliga has raised hope that the club can now “look into the future with optimism,” head coach Maciej Stolarczyk said in late January.

“We are slowly returning to normality and dealing with sports issues,” he told local press as pre-season training started. “Other things are falling into the background.”

But the hooligan roots run deep in southern Poland.

Biała Gwiazda (The White Star), as Wisla are nicknamed, one of Poland’s most successful clubs. Seven of their 13 national titles were won this century. Only fierce rival Legia Warsaw competed for top bragging rights in the last 20 years.

Krakow is also home to some of Poland’s most vicious hooligans. Their use of knives when fighting flouts unwritten rules banning weapons. They are also some of the most but are not alone in straddling the line that separates hooligans from gangsters

“Other clubs clearly also have links to criminal elements involved in drugs and racketeering,” says Christopher Lash, who runs the Right Bank Warsaw podcast. “But the difference is that at Wisla they took control.”

Boguslaw Cupial, the telecoms magnate that sold the club to TS Wisla, was prominent in a drive to end the that used to blight Polish football. The criminal gangs may not be so easy to shift, even with the help of the state authorities.

Despite the police action, the atmosphere around Wisla remains fearful.

“People are still afraid. The bandits have not disappeared,” says Jadczak. “You can still see their influence in the club and the city. You can still buy anti-Semitic Sharks paraphernalia at the club store!”

“I’m not sure the club can fight an outright war against the hooligans,” says Lash. “They’re still embedded in the club and people are wary of speaking out. Krakow is a small city.”

Rafal Wislocki, installed as president of Wisla earlier this month, blamed the “tense” situation at the club for his refusal to comment when contacted by Goal.

“We hope that with the media spotlight and the pressure from the authorities we can limit the engagement of these guys and wipe them out of the club,” he says. “These hooligans and criminals must be pushed out of Polish football.”