The last time Chelsea visited Anfield, it was Naby Keita who got the party started.

And in some style too.

His 20-yard screamer, lashed past a bewildered Kepa Arrizabalaga, set Liverpool on their way to a madcap 5-3 victory over the Londoners last July, on an evening few in red will ever forget.

The Reds got their hands on the Premier League trophy that night, Jurgen Klopp and his players enjoying an emotional, if slightly eerie, ceremony on the Kop. After 30 years, they were finally top dogs in England once again.

Things have changed somewhat since then. We're only just into March, but Klopp’s side know their reign as champions is all but over. A place in the top four is the summit of their ambitions this season, and a loss to Chelsea on Thursday could even spell the end of those.

As for Keita, he finds himself in a familiar situation. Back from injury, back available, and hoping to show the world what he can really do in a Liverpool shirt.

This is the Guinea international’s third season on Merseyside. The previous two have brought glory and silverware; the Champions League in 2019, the Super Cup, Club World Cup and Premier League in 2020.

Keita has been fulfilled when it comes to medals, no doubt about that, but in terms of impact, genuine impact, then the jury is still out. It feels like we say it every couple of months, to be honest, but this is a big moment for the 26-year-old. His team needs him, and he needs to show he can deliver for them.

This, remember, is the third most expensive player in Liverpool’s history. Keita cost more than £50 million ($73m) when arriving from RB Leipzig in the summer of 2018, but it is hard to argue that he has justified that investment yet.

Availability has been the main reason for that. Liverpool have played 148 games in all competitions since Keita signed, and he has featured in just 72 of them. There have been only 45 starts, and only 12 of those have seen him complete 90 minutes.

In the Premier League, he has appeared in 51 games out of 102, starting just 31. He has never started more than four league games in a row, his flow repeatedly interrupted by muscle issues. 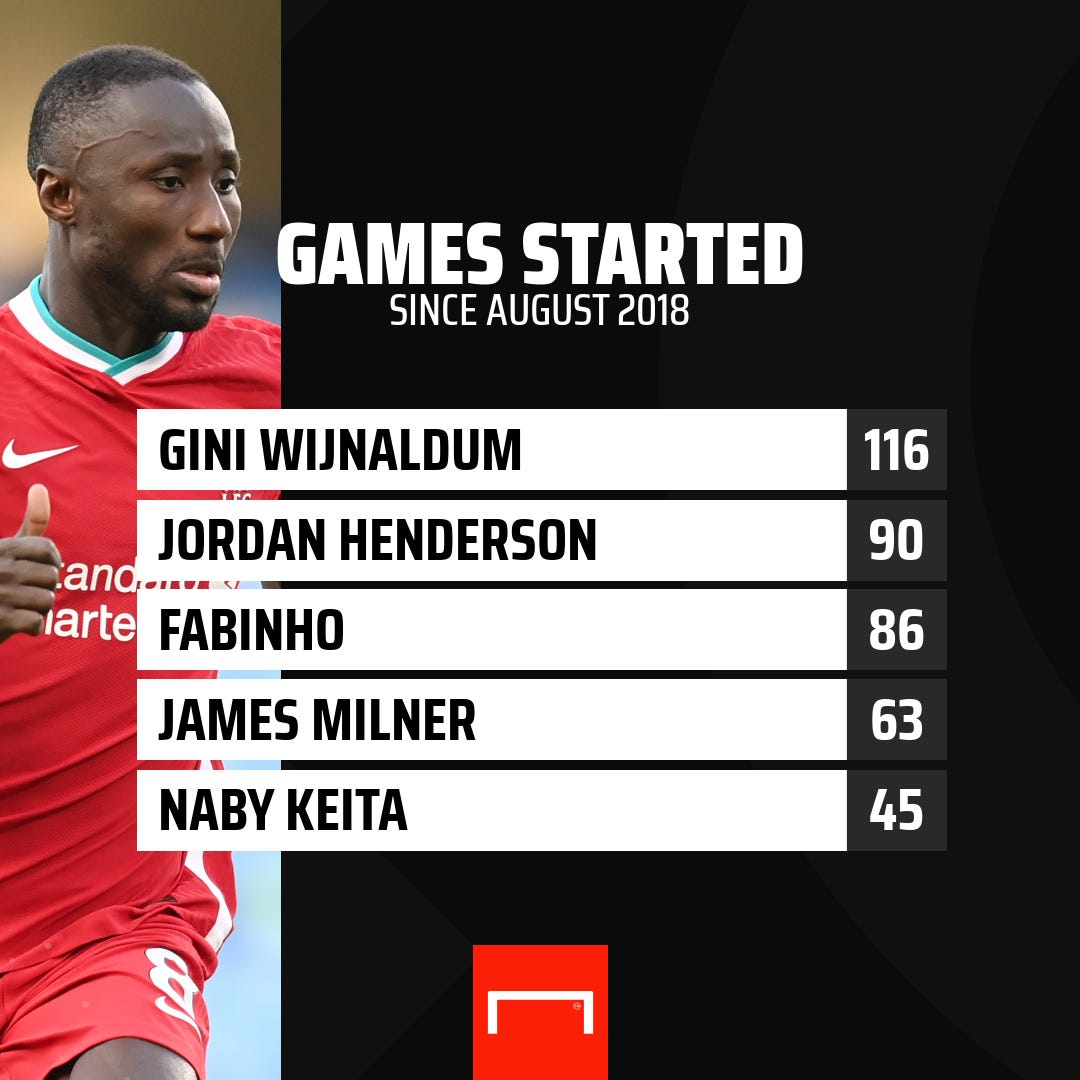 “His quality is undisputed,” Christoph Freund, sporting director at Keita’s former club Salzburg, tells Goal. “But the injuries mean he has not got into the rhythm he needs to be able to show that.

“Naby has exceptional footballing qualities. His understanding of the game and his ability in one-v-one situations are totally exceptional, even for football at the highest level.”

Freund, who worked with Keita for three seasons in Austria before his switch to Leipzig, was not alone in expecting that his former charge would set the world alight at Liverpool.

Keita arrived as one of the Bundesliga’s most exciting talents, a midfielder who was both destructive and creative, full of energy and, it seemed, a perfect fit for the Premier League – and particularly for Liverpool.

“I think a lot of people expected him to carry on and become one of the best players in the Premier League,” says Peter Zeidler, another of Keita’s former bosses at Salzburg. “But the next step was always the biggest step, and the most difficult.”

Zeidler, who is now in charge of Swiss outfit St Gallen, managed Keita briefly in 2015, but had previously been instrumental in the deal which took him to Salzburg from French second division club Istres in 2014.

“At the time, I was the coach of FC Liefering, the second team of Salzburg,” he tells Goal . “But my previous job was teaching French at a university, so if we ever went after a French-speaking player, whether it was Sadio Mane, Naby, [Dayot] Upamecano, I got the call!

“I remember the Naby situation very well. It was Angers against Istres, right at the end of the season. I watched the game with Gerard Houllier, and afterwards Naby came to our hotel.

“It was maybe two o’clock in the morning. He was very shy, but Gerard and I explained our way of playing, our philosophy at Salzburg, and we managed to convince him.”

Zeidler continues: “Gerard Houllier was very important for the deal, because he knew everybody in France! His best friend was Michel Rouqette, who now works as a scout for Lyon. Three, four times a week, they would speak about the most interesting players in France.

“Teams in Ligue 1 were not interested in Naby, but Michel kept telling Gerard that this guy was spectacular, better than all the others. Gerard took this to Ralf Rangnick (Red Bull’s director of football) and the rest is history.” 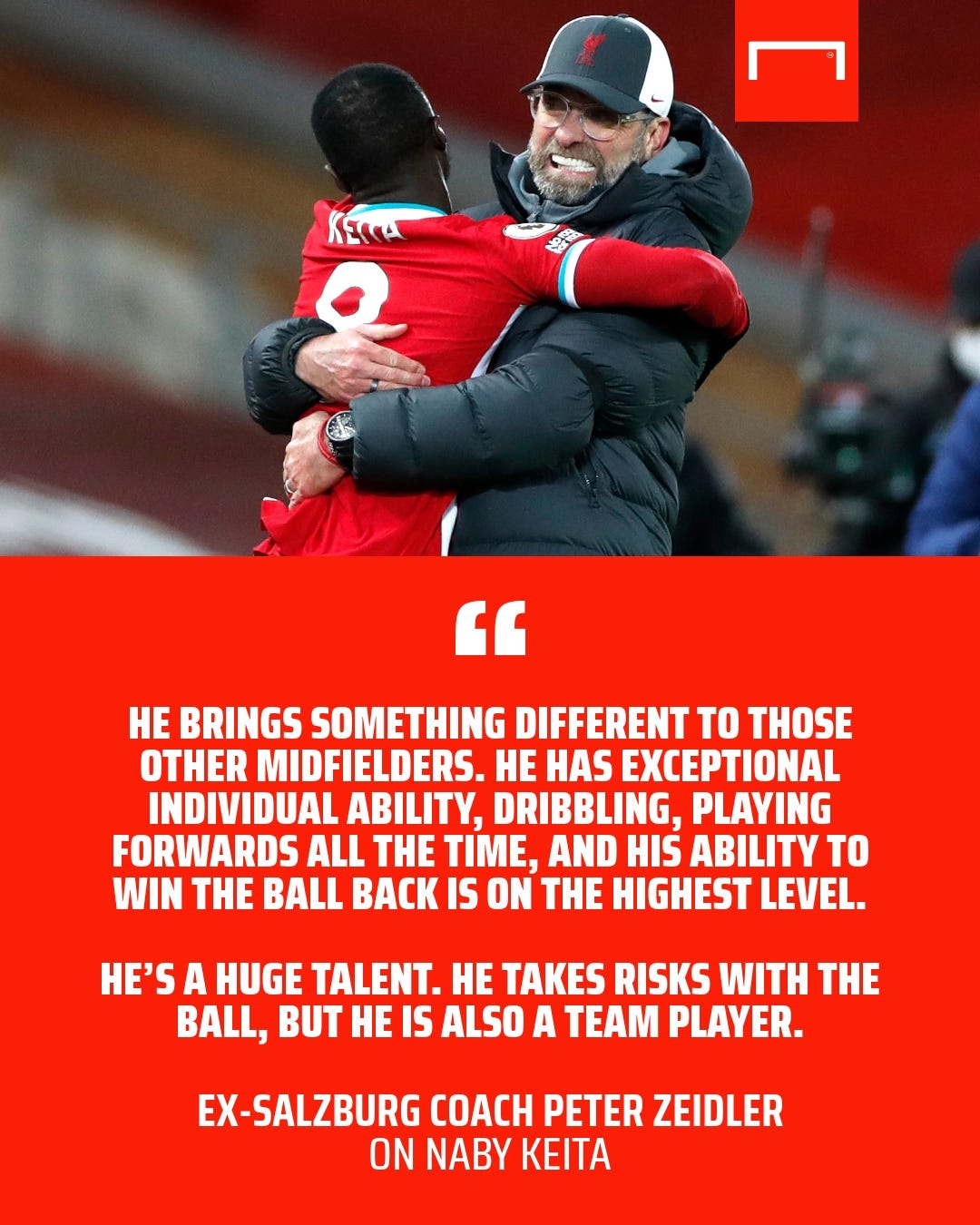 Zeidler, like Freund, believes Keita’s ability will allow him to flourish in England, provided he can stay fit.

“He brings something different to those other midfielders,” he says. “He has exceptional individual ability, dribbling, playing forwards all the time, and his ability to win the ball back is of the highest level also. He’s a huge talent, he takes risks with the ball, but he is also a team player.

“This season is important for him. He needs to come back, stay fit and play some games, and then we will see what he can bring.”

Keita made his return to action at Sheffield United on Sunday, playing the last 10 minutes of Liverpool’s 2-0 win. It was his first appearance since December 19, when he impressed in the Reds’ 7-0 triumph at Crystal Palace.

Liverpool were clear at the top of the league that day, and looking like they were ready to defend their crown impressively, despite their injury issues.

But with Keita sidelined due to a hamstring problem, things unraveled pretty spectacularly after Christmas. Their last dozen league games have brought only three victories, all of them away from home.

It means Keita will return to the team with added pressure on his shoulders. He was signed as a game-changer, so can he now help lead the club’s revival?

“Naby’s such a talented player,” says former Reds striker Neil Mellor. “I think there’s a lot of frustration from the fans – and I would imagine from himself too – that we’ve not really seen for a consistent period of time, exactly what he can do.

“I thought when he arrived in the Premier League, he was going to be one of the best players around. That first pre-season he had, I was like ‘wow!’ because he was absolutely flying.

“The injuries have held him back and, unfortunately for him, the world doesn’t stop. You have to keep moving forward, and other players step in. Curtis Jones has now gone ahead of him, and Naby has to fight to get ahead of him when he is fit.” 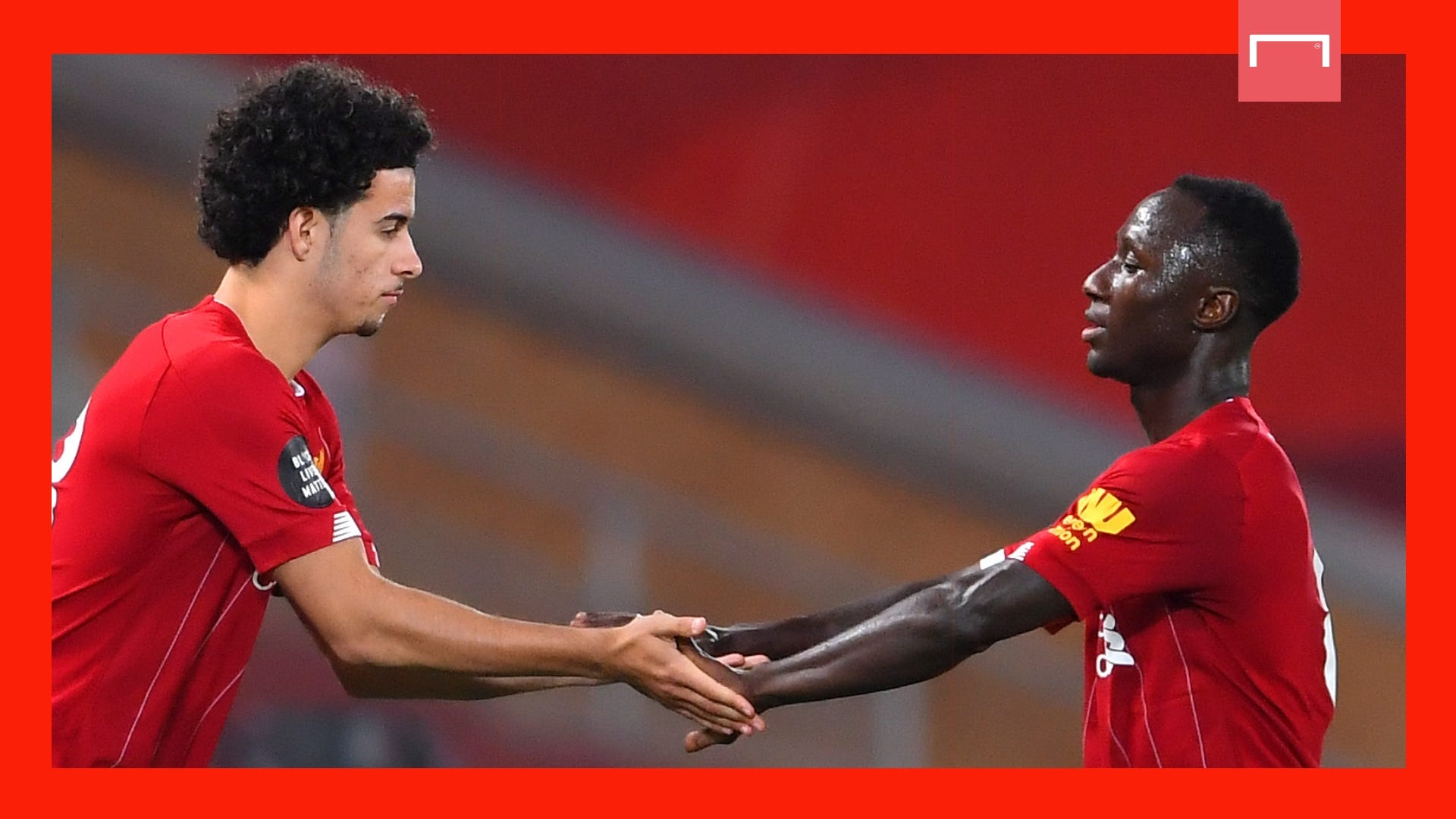 There is no chance of Klopp giving up on Keita any time soon. The manager’s faith in him remains, and he appreciates the difficulties he has faced.

Players are not to blame for injuries, and Keita is by no means alone in suffering during these past three seasons. Alex Oxlade-Chamberlain, for example, finds himself in a similar position, needing to prove himself all over again after a stop-start campaign.

“I think Naby definitely gives us something when he is fit,” says Mellor. “Sometimes, our midfield three can be a bit similar, but Naby gives us more, he’s more advanced and takes a bit of pressure off the front three. He carries the ball, takes risks and he has a goal threat.

“It was a lot of money we paid for him, and he hasn’t lived up to that yet, but it’s not been a failure – not yet anyway. We still believe there is a player there who will come good.”

“In my opinion, he is at the best club, and playing under the best manager, to realise his potential,” he says.

“I know Jurgen Klopp always speaks positively about him, and it would be great if he could have him available for selection for a sustained period. I think that would make a huge difference to Liverpool.”

Klopp will certainly hope so. Because almost three years into his Reds career, Keita is a puzzle that is yet to be solved.

If and when it is, Liverpool should be all the better for it.