When Arsenal line up against Olympiacos on Thursday night, there will not be much that comes as a surprise to the Greek champions.

It has been just over a year now since their dramatic 2-1 win in north London, which dumped Mikel Arteta’s side out of the Europa League at the last-32 stage

Since then, not much has changed at the Karaiskakis Stadium.

Pedro Martins, the man who orchestrated the victory, remains in charge and several of the players who started that crucial second leg 12 months ago will be involved again in Athens later this week.

But there is one thing that will be different this time around.

When the two sides met last year, Sokratis was a key member of the Gunners' squad and featured in both legs, starting the game in Greece and coming off the bench in the return fixture.

This time, however, the experienced centre-back will be in the opposite changing room following his free transfer switch to Olympiacos just six weeks ago.

And his new team-mates have wasted little time in tapping into his insider knowledge ahead of Thursday night’s rematch.

“He has told us some secrets, but I won’t tell you about any of them,” admitted Olympiacos winger Bruma during an exclusive interview with Goal this week. “It’s between us and Sokratis.

“Of course, he knows Arsenal’s locker room better than anyone.

“He is a player with a lot of experience, he’s played for Milan, Dortmund and Arsenal who are all great, great clubs.

“So Sokratis is a very good voice, he’s been helping a lot in the locker room and he’s been helping the team a lot with his experience. We are really pleased to have him here and I’m sure he’s going to be a big help on Thursday.”

Bruma was not involved in last year’s meetings between the two sides having only arrived in Greece towards the end of the summer transfer window, when he agreed to spend the remainder of the campaign on loan from PSV. 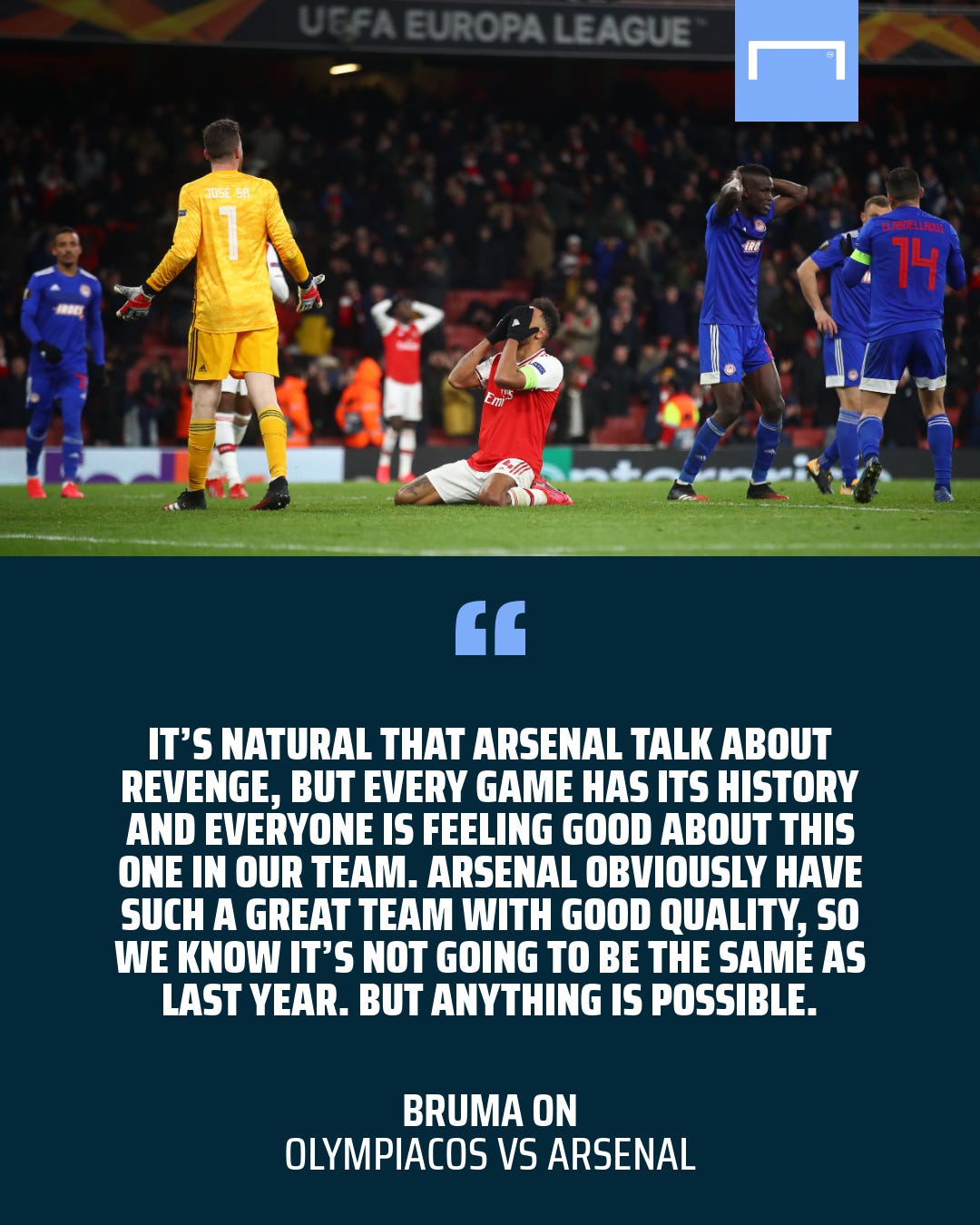 But the Portugal international sat down and watched some of last season's clashes after the draw was made, and is well aware that Arsenal will be approaching this season’s games with a sense of revenge driving them on.

It is something he and his team-mates are expecting, but the 26-year-old is adamant there is no fear factor within the squad about what is to come.

“Not at all,” he said. “Olympiacos has a lot of really experienced, international players.

“It’s natural that Arsenal talk about revenge, but every game has its history and everyone is feeling good about this one in our team.

“We were on the journey back from Holland after playing PSV [in the round of 32] when the draw was made and it was a surprise for us all.

“We were all happy because it’s going to be a great, great game. We want it, and despite it not being an easy tie, we are just thinking of winning and that’s all that matters.”

Bruma added: “I wasn’t here [last year] of course, but it was a great match, especially for Olympiacos.

“Me and my team-mates have talked a little bit about it and we all know it’s not going to be an easy tie again.

“It wasn’t last time and Arsenal obviously have such a great team with good quality. So we know it’s not going to be the same as last year, but anything is possible.”

Having started the season with PSV, Bruma made the move to Athens in September and has settled in well to his new surroundings.

The winger has scored four goals in 16 appearances so far for Olympiacos, and has his sights set firmly on securing a spot in Fernando Santos’ Portugal squad for this summer’s European Championship.

He could come up against his international team-mate Cedric Soares over the next 10 days, and knows what two good performances in such a high-profile fixture could do for his chances of ensuring he will be involved when the reigning continental champions look to defend the trophy they won in France five years ago. 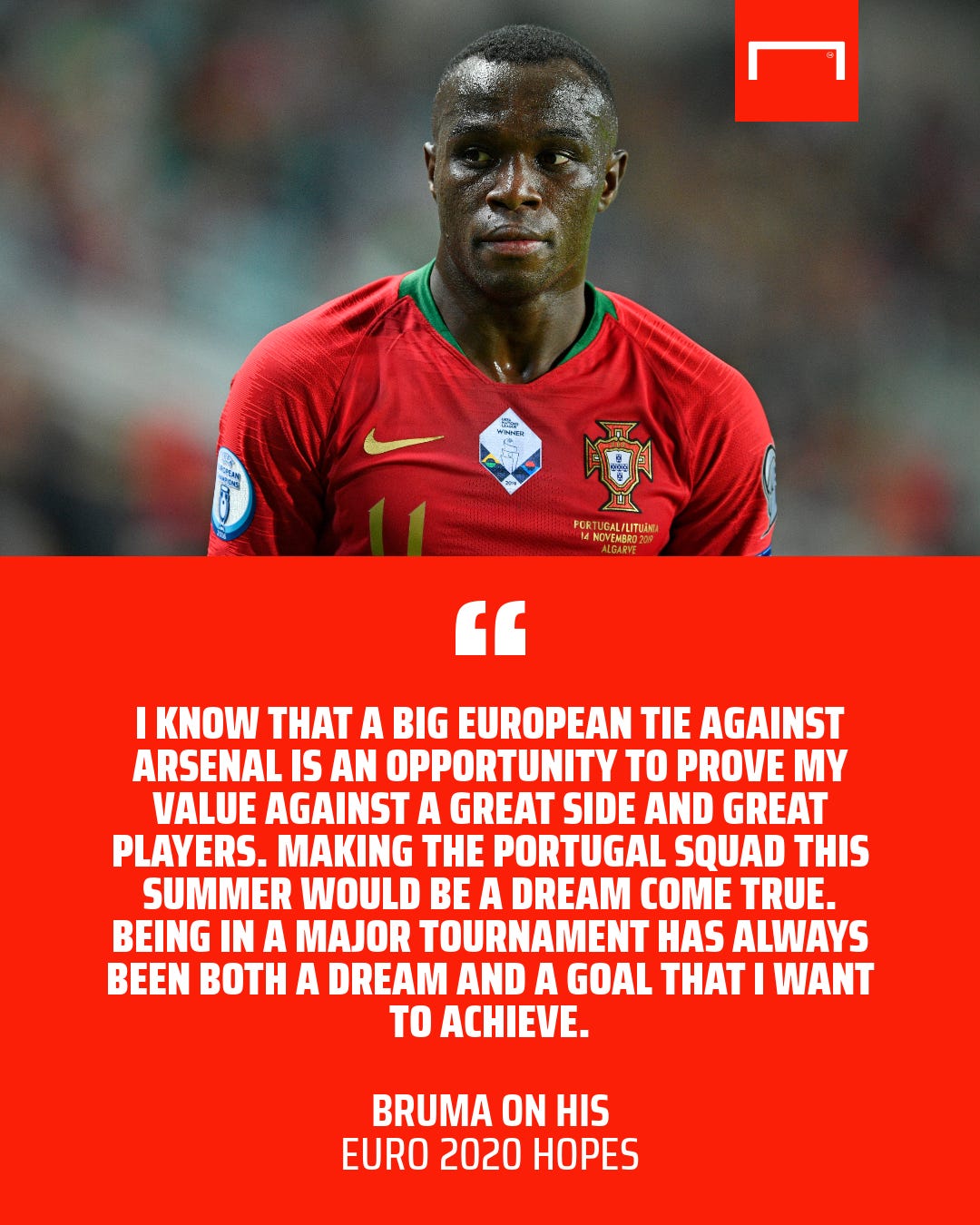 "I know that the national team coach normally follows my games,” said Bruma. “He speaks with me regularly as well as with other colleagues of mine.

“Of course I know that a big European tie, against a team like Arsenal, is a match that catches all the attention, and is an opportunity to prove my value against a great side and great players.

“Making the Portugal squad this summer would be a dream come true. I have represented my country since I was a teenager and being in a major tournament has always been both a dream and a goal that I want to achieve.

“The only way to do it is working hard every day."

As well as knowing each other from the national team, Bruma and Cedric were also team-mates at Sporting C.P. when the winger came through the ranks and made his breakthrough during the 2013-14 season.

The pair have gone on to form a close bond, and the Olympiacos star says he has a lot to thank the Arsenal defender for.

“Cedric is a good friend and a great player,” he said. “I’ve known him for a long time. At Sporting we played on the same side, he was the right-back and I was the right forward.

“He taught me a lot when I was a young player and I have a lot to thank him for. I like him a lot, I care about him a lot and I wish him all the best.

“If we meet on the pitch Thursday it’s going to be a great duel.”

Olympiacos head into Thursday night’s first leg sitting 14 points clear at the top of the Greek Super League. They have lost just one of their 25 league game so far this season and claimed a thrilling win against PSV in the previous round of the Europa League to set up a second successive meeting with Arsenal in the knockout stages.

Their form since the start of the campaign is the polar opposite of the Gunners, who continue to struggle domestically and find themselves struggling to qualify for European football next season.

Saturday’s disappointing 1-1 draw with Burnley leaves them sitting 10th in the Premier League and facing up to the prospect of their worst-placed finish domestically in 25 years.

“Their league position does surprise me,” admitted Bruma. “It’s really strange because Arsenal have great players and a good coach.

“But they still have a lot of games to go and with the players and the coach they have I expect them to climb a little bit up the table.”