The 19-year-old came into the current season as an unknown at home and abroad, but a superb goal-scoring record has catapulted him into the spotlight

Over the last decade, Senegal has become Africa’s number one talent producer, with the likes of Sadio Mane, Kalidou Koulibaly, Ismaila Sarr and Idrissa Gueye among the players currently making their mark towards the top of the European game.

And over in the Czech Republic, Slavia Prague forward Abdallah Sima is producing performances that suggest he is next in line.

The youngster is enjoying a sensational breakout season in the Czech top flight and Europa League, though his fine campaign owes a lot to the coronavirus pandemic, without which, he may never have got his opportunity.

Sima originally arrived in the Czech Republic in early 2020 when he was recruited by lower-league side MAS Taborski, having previously been on the books of French outfit Thonon Evian, a common first destination for players arriving from Africa.

He duly caught the eye of Slavia last summer despite having only played two matches for his previous employers, and was recruited by the Red and Whites in July.

Initially, having only just turned 19 and without a professional outing under his belt, Sima was recruited for the reigning champions’ reserve side.

But following an injury crisis that was exacerbated by a swathe of positive Covid-19 diagnoses, his progress to the first team was accelerated in late September.

The goals duly followed, both domestically and on the continent, with a double in December’s derby against Sparta Prague particularly unforgettable.

And as he prepares to face off against Leicester City in Thursday's Europa League last-32 tie, Sima’s goal record speaks for itself.

In the Czech top flight, he has scored 11 goal in 14 outings already, a sensational return for a player who is still just taking his first steps in the professional game, let alone in a new country and a new league.

Sima, who has contributed six assists this term too, has forged an excellent relationship with Jan Kuchta and Nigeria’s Peter Olayinka, with the trio forging a fearsome attacking trident.

The teenager has also been utterly unfazed by Europa League defences, announcing himself in continental competition with goals in both of Slavia’s group-stage victories over Nice.

In the first fixture against the Ligue 1 outfit, he scored with a fine header after leaping between the opposition defenders to meet a corner - evidence of his burgeoning threat at set-pieces.

“Abdallah was nervous [against Nice], but his performance was improving,” Slavia coach Jindrich Trpisovsky told the club’s official website. “The goal helped him a lot, maybe he could have jumped over the Eiffel Tower with that jump!”

He also bagged against Hapoel Be’er Sheva in December as the Czech giants booked their place in the knockout stages. 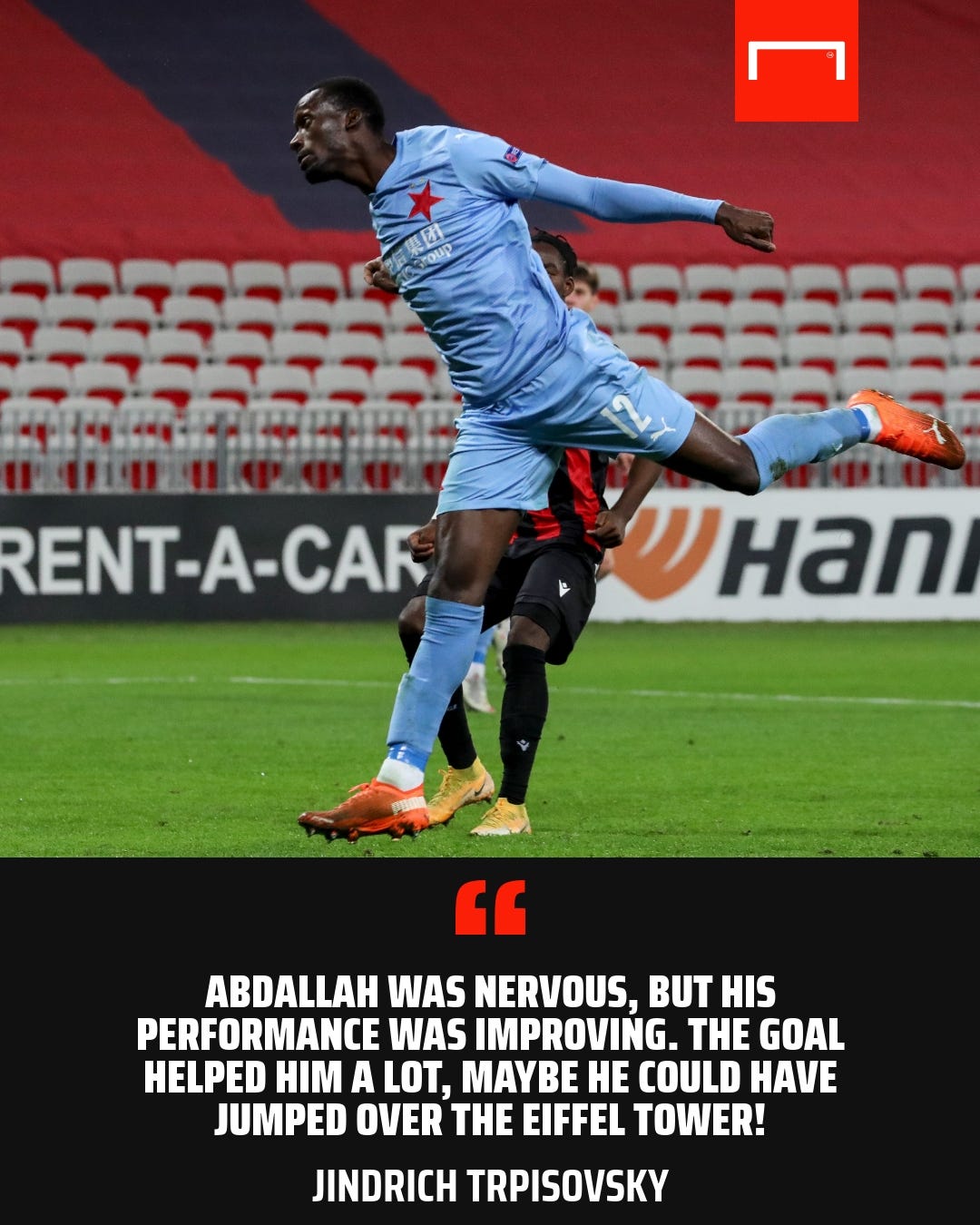 To his credit, he has often been asked to play out on the right flank rather than in his favoured position of striker, and it is his role out wide – cutting inside to great effect – which has prompted parallels with France and Arsenal legend Thierry Henry.

However, longer term, Sima’s future will likely see him leading the line as a classic, well-rounded centre-forward.

Standing at 188cm (6' 2") and with a remarkable leap, he represents a clear aerial threat, and he already has the frame – despite his slender years – to be a presence in the final third.

Unlike his compatriot M’Baye Niang, who has often been employed in a wide role during his stints with AC Milan and Rennes, Sima is already demonstrating that he has the killer touch to justify a role as a central striker.

“He’s a hugely intelligent player,” Trpisovsky continued, “who has a great sense of space and is improving quickly.

“He has all of the qualities Slavia are looking for, and in addition to his skill and his football intelligence, he’s also very hard-working.”

Sima has also impressed team-mates by learning English quickly, while his desire to go above and beyond in training has also won him many admirers. 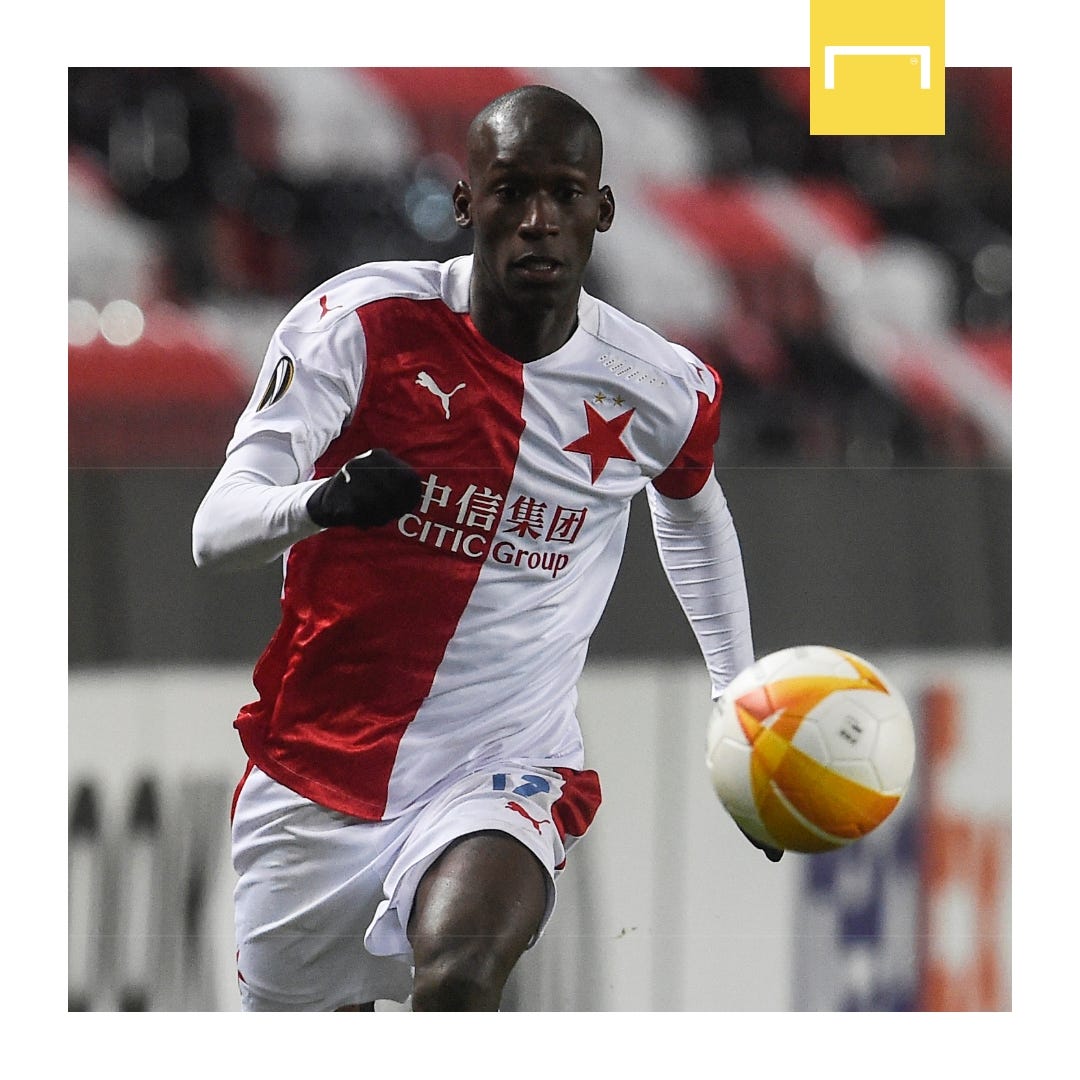 His form duly piqued the interest of some of Europe’s biggest clubs, with reports suggesting that Arsenal and Juventus, no less, were keen on his services.

West Ham were also linked with a move for the attacker, meanwhile, as they sought a replacement for Ajax-bound Sebastien Haller during the recent transfer window.

While he has already been attracting desirous glances from continental giants, he remains something of an unknown quantity in his homeland, and is yet to represent Senegal at any level.

“I’m discovering him like the rest of the world, in the Europa League this season,” local journalist Demba Varore told Goal. “We still don’t know much about him.

“I am excited about seeing him prove himself [against Leicester], and the match will be closely scrutinised in Senegal to see if he has the qualities to come into the national team.

“No one knows him here.”

If Sima continues his recent form, then expect that that to change imminently.