Since seeing a move to Juventus collapse 18 months ago, the Czech's career has gone into freefall, with current employers Roma considering letting the 22-year-old leave on loan this month in the desperate hope that their club-record signing can rebuild his shattered confidence away from the glare of the Stadio Olimpico spotlight.

Schick had been mobbed by delirious Giallorossi fans when he arrived at Fiumicino airport in the summer of 2017.

The loss of Mohamed Salah to Liverpool had hit the supporters hard and while Schick was hardly a like-for-like replacement for the Egyptian winger, the forward was expected to make just as big an impact in the Italian capital, having forged a reputation for himself as one of the most promising young players in Serie A after a sensational debut season at Sampdoria.

Indeed, in just 1507 minutes of game time at the Luigi Ferraris, and from only 14 starts, Schick had scored 11 times.

However, his performances had been even more impressive than his strike rate, with Antonio Cassano arguing that he was even more talented than Paulo Dybala.

Schick was tall but technically excellent. A fast, innovative forward, he thought as quickly as he moved.

Juventus director Pavel Nedved was smitten, unable to avoid comparing his compatriot to one of his former team-mates.

"Schick has a great future in front of him," the Czech legend told Denik. "Right now he doesn't have the muscles, but you can just imagine him in two or three years.

"He reminds me of Zlatan Ibrahimovic because he was like that when he came to Juve. He didn't have the muscles either.

"Then Zlatan gained muscles and turned into a world-class striker. Schick is also this type of striker: great feet, tall and fast.

"If Patrik keeps improving himself he can turn into a world-class striker as well." 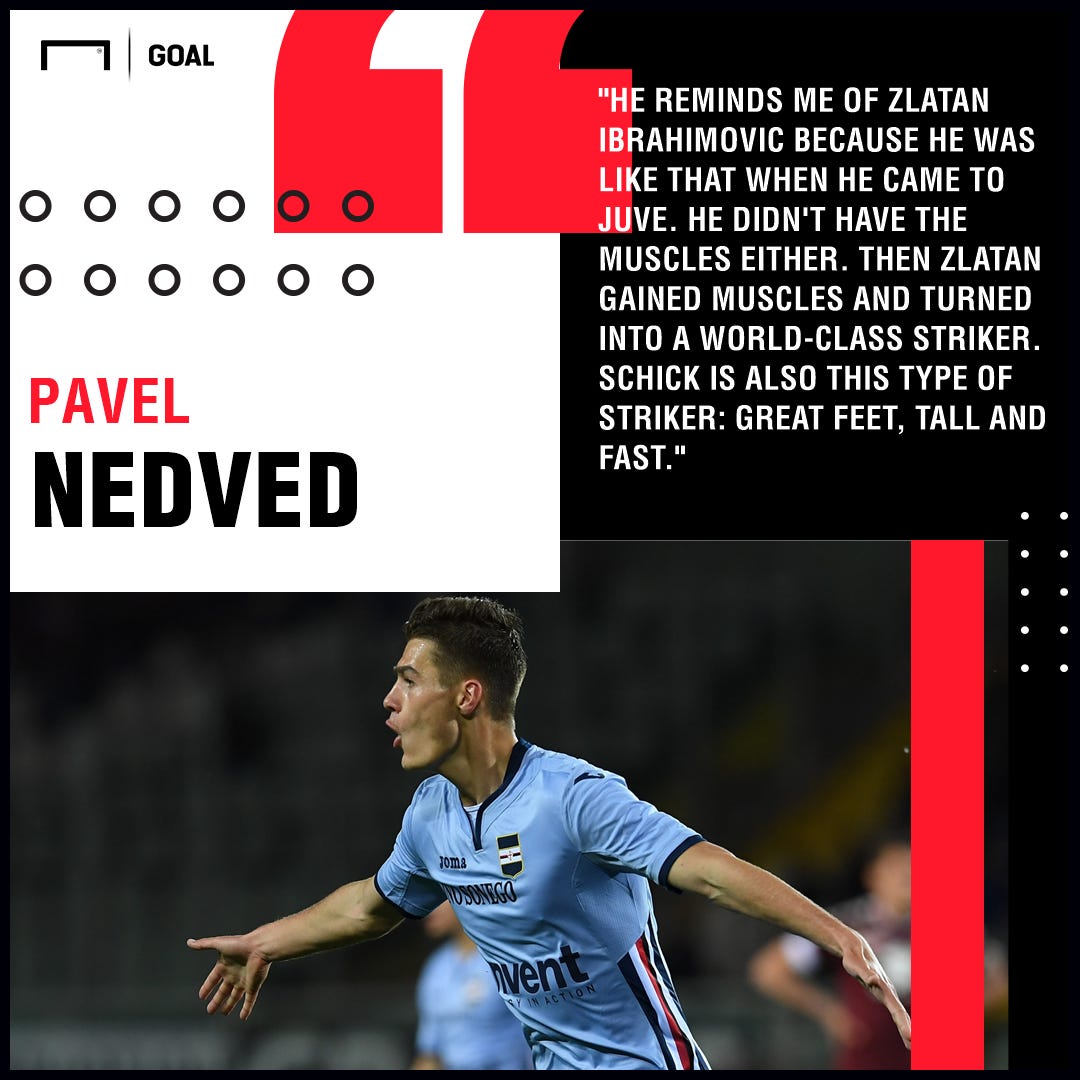 The plan was for him to do so in Turin.

Schick's buy-out clause was €25 million (£22m/$29m) but Juve agreed to pay €30m as Samp ceded to their request to spread the payments out over three years.

Then, disaster struck, with Juve's doctors detecting a minor heart inflammation during what was expected to be a routine medical.

The transfer stalled for over a month amid reports that Juve were trying to change the terms of the agreement and take the striker on loan for a year rather than signing him on a permanent deal.

"It's a farce," he told Secolo XIX. "He's not healthy, he's really healthy. What they found is the equivalent of a cold!

"Sampdoria won't go back a millimetre on any agreements. The boy is healthy, he can play, but now we have to worry about who has put out rumours that could damage the image of one of the brightest talents in European football.

"If Juventus want to back out, we'll sell him to one of the other four clubs that are ready to buy him."

And that's exactly what happened.

When Schick returned from holiday in the middle of July, he was informed by his agent, Pavel Paska, that Juve wanted to arrange another medical.

“I told him I wasn’t going anywhere, that it was already getting on my nerves and I’m not flying to Turin, it would be useless," he explained.

"It didn’t matter to me anymore, I was a little bit angry. The deliberations were unnecessary, and in the middle of July my €25 million release clause ceased to apply.

"So, as far as I was concerned, the president of Sampdoria could name his price and put my value as high as possible. That’s what he did, he eventually got it up to €42m.

"When I signed I felt great relief that I could finally concentrate only on my football."

That sensation didn't last long, though. No sooner had he made his Roma debut than he was sidelined by the first of a succession of minor injuries.

When he did play, he looked a cheap imitation of his former self, slow and cumbersome on the ball, embarrassingly panicked in front of goal.

He was erring off the field too, forced to reaffirm his commitment to Roma after discussing a potential move to a bigger club just months after joining the Giallorossi.

The hope was that he would feel more settled in his second year in Rome, reap the benefits of a stress-free summer, and he impressed during pre-season. 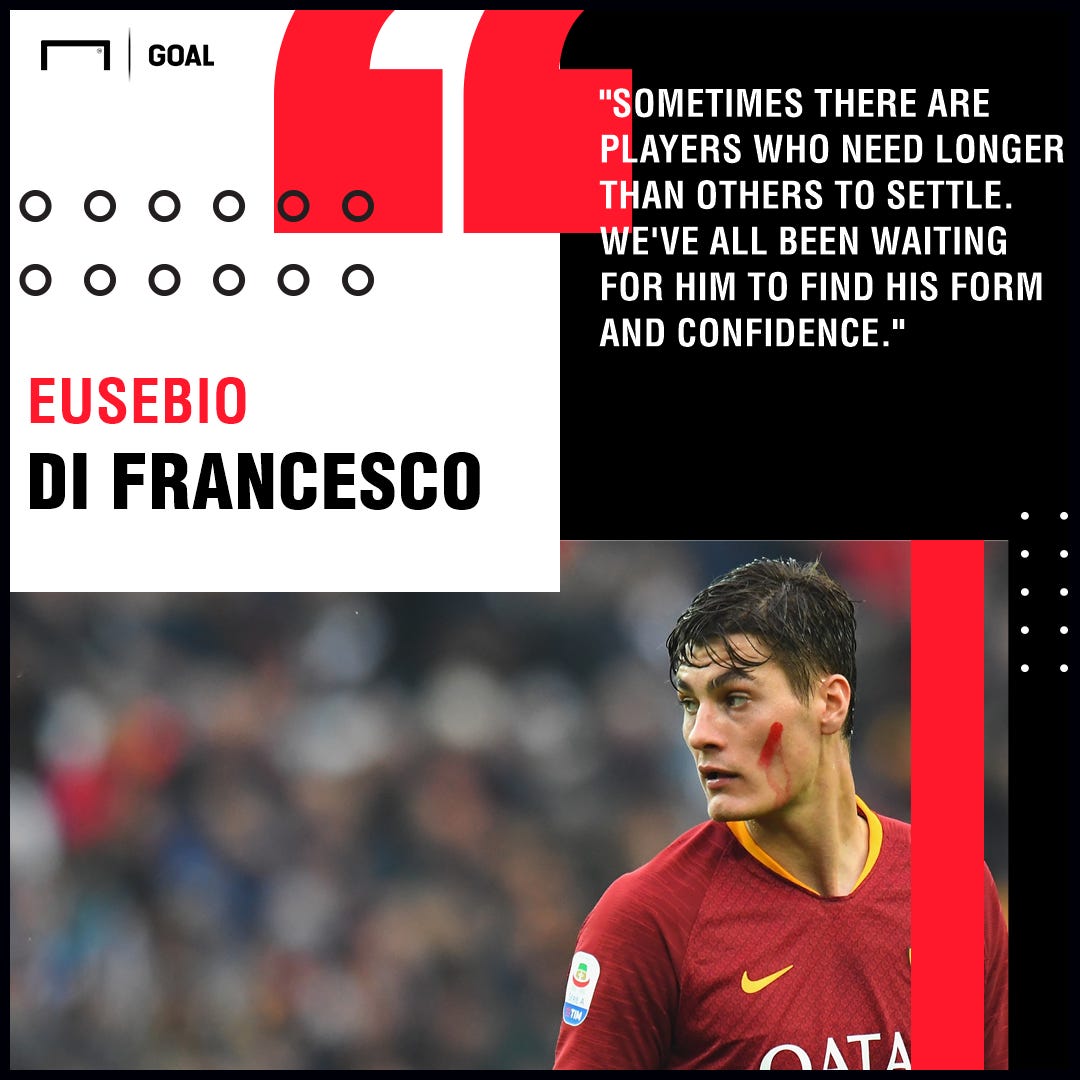 "The worst is behind me and I hope the best is around the corner," he opined.

The sad fact of the matter, though, is that Schick is still struggling, physically and mentally. In 44 appearances for Roma in all competitions, Schick has scored just five goals, without registering a single assist.

Last month, he was shortlisted for the 2018 Bidone d'Oro ('The Golden Bin'), an award given by a satirical website to the worst player in Serie A over the preceding 12 months.

A major part of the problem is that he hasn't always been used in his preferred position up front, with coach Eusebio Di Francesco often deploying him on the right wing last season.

He has also been utilised as a No.10 but even Di Francesco has now conceded that it is not a position in which Schick excels.

But then, Schick has never looked remotely capable of displacing Edin Dzeko up front either.

The Bosnian is the youngster's closest confidante at Trigoria but is also the biggest obstacle between him and a regular starting berth.

However, even when the Bosnian was sidelined by injury at the start of November, Schick failed to impress.

As a result, it is increasingly possible that he will now be sent back to Sampdoria for the remainder of the 2018-19 campaign.

The man himself has stated, "I’ve heard rumours but my ideas are clear: I only want to stay here and show what I can do."

However, a temporary return to familiar and more forgiving surroundings might be just what he needs.

When Nedved looked at Schick in a Samp shirt, he saw Ibrahimovic without the physical strength. As it transpired, he also lacked the Swede's mental fortitude.

Then again, even Ibrahimovic's confidence would have been rocked by the setbacks Schick has endured over the past 18 months.

Failed medicals and fitness issues have unsurprisingly taken their toll on the 22-year-old.

He has recovered from his physical problems. But mental setbacks often require more time.

As Di Francesco mused, "Sometimes there are players who need longer than others to settle.

"We've all been waiting for him to find his form and confidence."

Hopefully, with the help of Muhlfeit, Schick can rediscover both.