The Manchester City winger has, along with the likes of Marcus Rashford, helped football change its approach to dealing with prejudice in the game

Raheem Sterling will head to Chelsea on Thursday night with a Black Lives Matter badge prominently printed on his Manchester City shirt.

And, since the Premier League's Project Restart kicked off in June, footballers have also been taking a knee in support of the movement, which has gathered momentum following the death of George Floyd in the United States.

Those symbolic gestures come just 18 months after racially abusive language was aimed at Sterling as he retrieved a ball in front of supporters at Stamford Bridge.

"It was a massive step for the Premier League to allow something like that to happen, it shows we’re going in the right direction,” the England international said after City's return against Arsenal. “It shows we’re achieving change. It was natural and organic."

Football in the UK is no longer prepared to brush away its problem with prejudice and Sterling is among a generation of young footballers placing it firmly in the spotlight.

But the depressing events on Monday night during City's 5-0 victory over Burnley – when a plane was flown over the Etihad Stadium trailing the message "White Lives Matter Burnley" – suggest there is still some way to go.

The banner has been condemned throughout football, not least by Burnley, who pledged to hand out lifetime bans to those people responsible.

Sterling, who was sat among the substitutes when the plane flew over the stadium, later tweeted a picture of the fly-past with the simple message: "#TimeForChange" which received 10,000 retweets and close to 100,000 likes.

The 25-year-old has become a leading spokesman for footballers on race, class and society since he called out the media for its coverage of young black athletes following the incident at Chelsea in December 2018.

Unlike in the US, where NFL quarterback Colin Kaepernick has been ostracised for taking a stance against racism, Sterling's stance has been embraced; he was named the Football Writers' Association Footballer of the Year last season and was also named the PFA Young Player of the Year, voted for by his peers.

He is not the only player from a BAME background to speak out against prejudice in the game but his profile has helped to give confidence for others to follow, including England team-mates Trent Alexander-Arnold and Marcus Rashford. 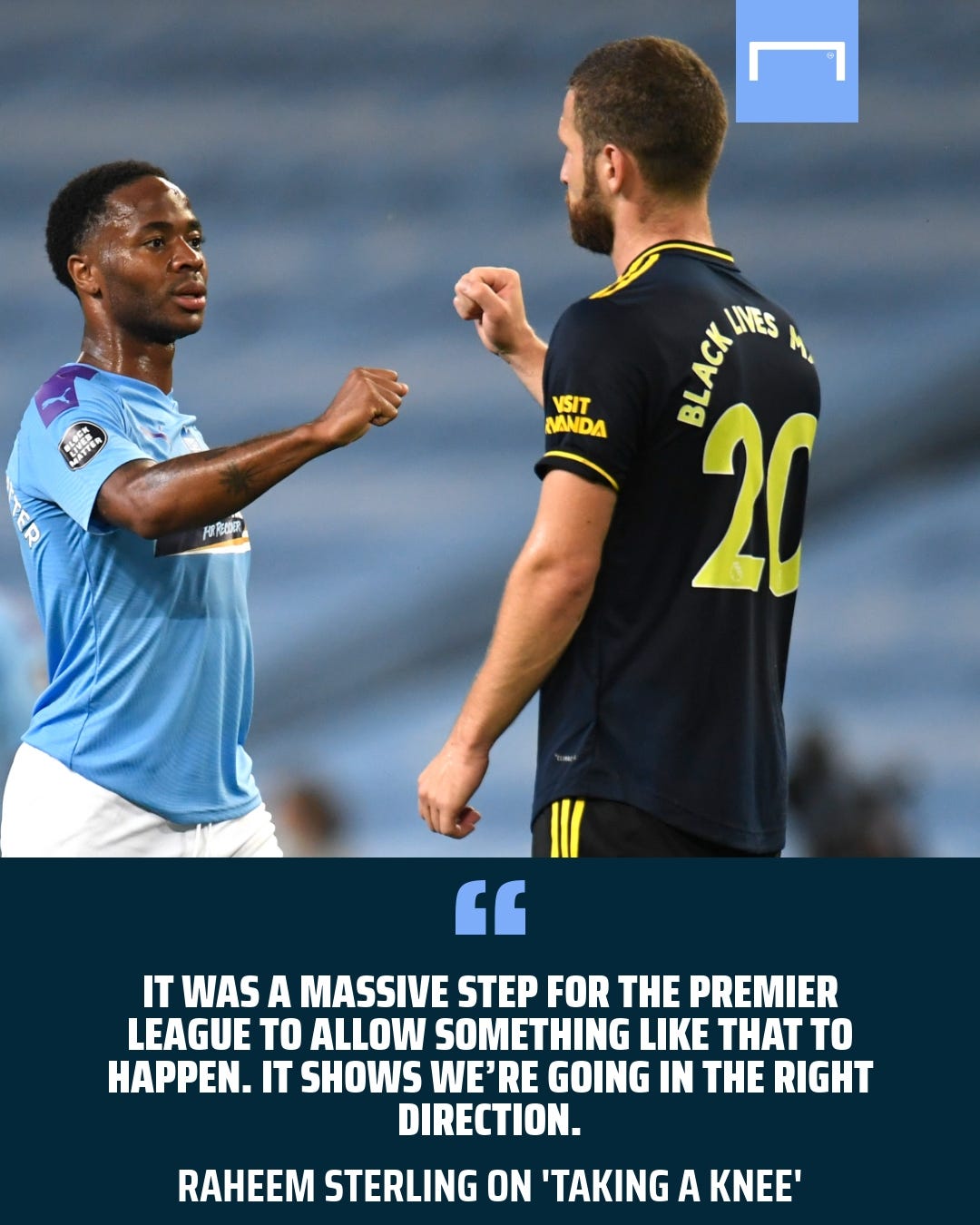 The Manchester United striker has recently been successful with his campaign to persuade the government to extend a free school meals scheme outside term time .

"It's becoming more normal that people speak out on topics that they believe in and I think it's just positive for the future," Rashford told the BBC. "Just look at the generations after us – hopefully it becomes a normal thing and people actually want to do that and put themselves forward to do that."

Sterling's ability to make a difference makes him one of the most important footballers in the UK, if not the world. And his conviction in discussing important issues shows confidence for a player that has grown immensely since he suffered sustained abuse following his acrimonious exit from Liverpool in 2015.

That move was followed by an unhappy Euro 2016, when a campaign was started midway through the tournament to have him sent home from the England squad.

Since then his form has increased massively on the pitch with this season already the third successive campaign when he has hit more than 20 goals. And it was fitting that he should score the first goal of Project Restart with a typically crisp volleyed finish in the 3-0 win over Arsenal just over a week ago.

City boss Pep Guardiola has been given a lot of credit for turning around his playing fortunes but the Catalan places the credit squarely with the winger and his desire to work hard. And Guardiola is proud of his players for using their position to make a difference off the pitch as well as on it.

“What Raheem Sterling has done many times, players in our club, Marcus Rashford or whoever, of course they have to use these platforms to make a better society," he said ahead of the return of football.

"They don’t need to get more money – fortunately for them they have enough – so they do it to get a better place to live, for their families, for our kids, for the next generations."

Sadly the Covid-19 pandemic means there will be no fans at Stamford Bridge on Thursday night when Sterling returns. But the Black Lives Matter symbol will be seen on televisions across the UK and around the world in another significant statement as the fight against racism continues.