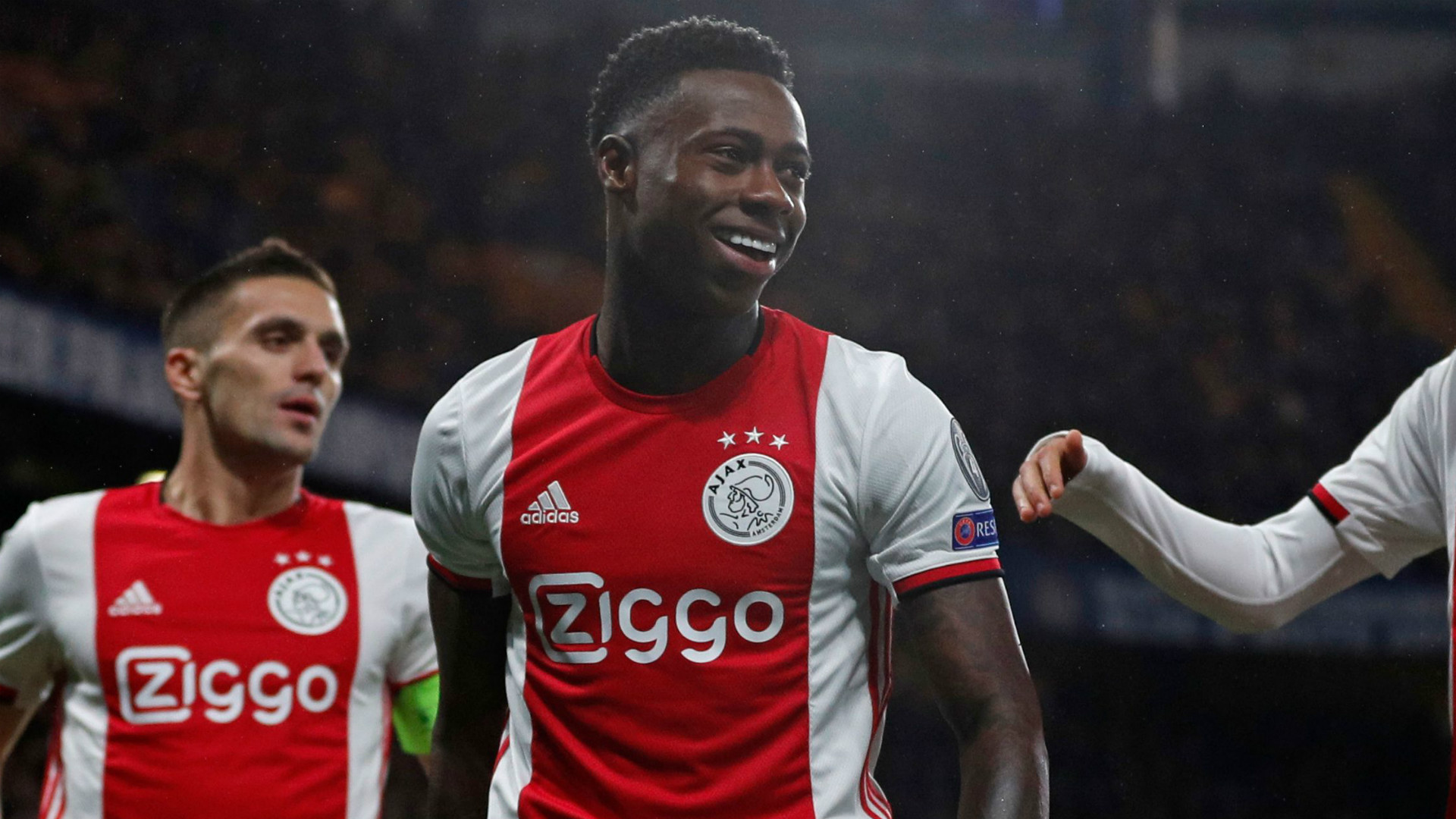 Ajax winger Quincy Promes has admitted that he would be interested in a Premier League transfer after impressing in the Eredivisie champions' spectacular 4-4 draw at Chelsea.

Erik ten Hag's side found themselves 4-1 up early in the second half at Stamford Bridge on Tuesday, with Promes among the scorers while also providing the cross for Tammy Abraham's own goal.

The game turned dramatically in the 70th minute, however, as referee Gianluca Rocchi sent off both Daley Blind and Joel Veltman, as well as awarding Chelsea a penalty, with the Blues eventually securing a point.

Ajax's talent was clear for all to see in west London, with the likes of Promes, Hakim Ziyech and Donny van de Beek all catching the eye.

And Promes admits that, if the chance came to move to England that he would consider it, despite having only just returned to his native Netherlands this summer from Sevilla.

"To me, if I have a chance, maybe in the future," Promes told reporters when asked about a potential transfer to the Premier League.

Focusing back on the game, it was clear that referee Rocchi's performance was on the mind of several Ajax stars, who were left dumbfounded by the official's impact on the match.

And Promes believes that referees have hurt Ajax in both games against Chelsea during this season's Champions League group stage, though he remains happy with his team's overall performance as the battle with the Blues and Valencia to qualify for the knockout stages from Group H continues.

"I didn't tell him everything was okay but everybody makes mistakes," Promes said of Rocchi. "I think you should watch back what he did and for us we just feel like we deserve more. We are supportive, we are professionals and we shake hands but we are not happy with it.

"We just play the game and in the end the referee is in charge. In the first game in Amsterdam, I also scored a goal that went to VAR. In my opinion, it was a goal.

"We know that we have good quality. First, me and then Hakim make great goals. So yeah, we are very happy. It (the group) will be exciting because we’ve got three teams with seven points.

"So we are excited ahead of the coming games and we will see who comes out on top. Chelsea have a strong team but we have proven that we have strength too and we can compete."

Ajax goalkeeper Andre Onana was kept busy in the closing stages of the game as Ajax hung on with nine men, and the Cameroonian goalkeeper admits that he has never been involved in a match like the one on Tuesday night.

"Never," Onana answered before assessing the eventful match. "I think we are disappointed but, when you see the bigger picture, it is good to leave with a point here. It was not easy. It is not easy at all. We fought to the end.

"We didn’t lose. It was really important for us not to lose. We did it and I am really proud of the guys. I think the way we fought together, it is not easy to run up and down with nine men. My team-mates were hard workers.

"Even if we are playing with seven men then we will try and play our football because if we play their game, then it will be easier for them because they are more physical and stronger than us. So for us, it is more important to keep possession and to try to play but with nine it is not easy.

"On the field, I was really angry because I thought 'what is going on?'. I always say that the referees, they can make mistakes. We just have to respect them. Sometimes they will be right or not. They just try to do what’s best but it was not the best of games.

"I think [Frank] Lampard is doing really well [at Chelsea]. I am not really surprised [about their comeback]. I think for us, the important thing is us and we just tried to look at ourselves. We tried to stay patient with the ball and the space will come. The space will open up and we try to score one more ourselves."

Ajax are next in European action on November 27 when they travel to France to take on Lille, with Chelsea visiting Mestalla to face Valencia on the same evening.