The last time Darwin Nunez and Erling Haaland ran into each other, they were just kids. How could they ever have known that the next time they did so, the eyes of the world would fall upon them?

It was in May 2019, in the modest surroundings of the Stadion Miejski Widzewa in Lodz, that the Premier League’s two new, big-money stars last met. A group match at the U20 World Cup, played in front of a crowd of less than 5,000.

Nunez, Liverpool’s new £64 million ($78m) centre-forward, was the one left smiling, scoring the first goal, and a cracking one at that, in a 3-1 victory. Shades of Fernando Torres, for sure, in the youngster’s run, touch and stunning, dipping volley that night.

Haaland, who this summer joined Manchester City from Borussia Dortmund in a £53m ($65m) transfer, would be left disappointed, seeing a header ruled out after a marginal offside call, though he would take his frustrations out later in the tournament, scoring nine times in a remarkable 12-0 win over Honduras in Lublin.

That, as you might imagine, was enough to earn him the Golden Boot, despite Norway’s early exit. Nunez’s Uruguay, meanwhile, were beaten in the last 16 by an Ecuador side which would eventually finish third. 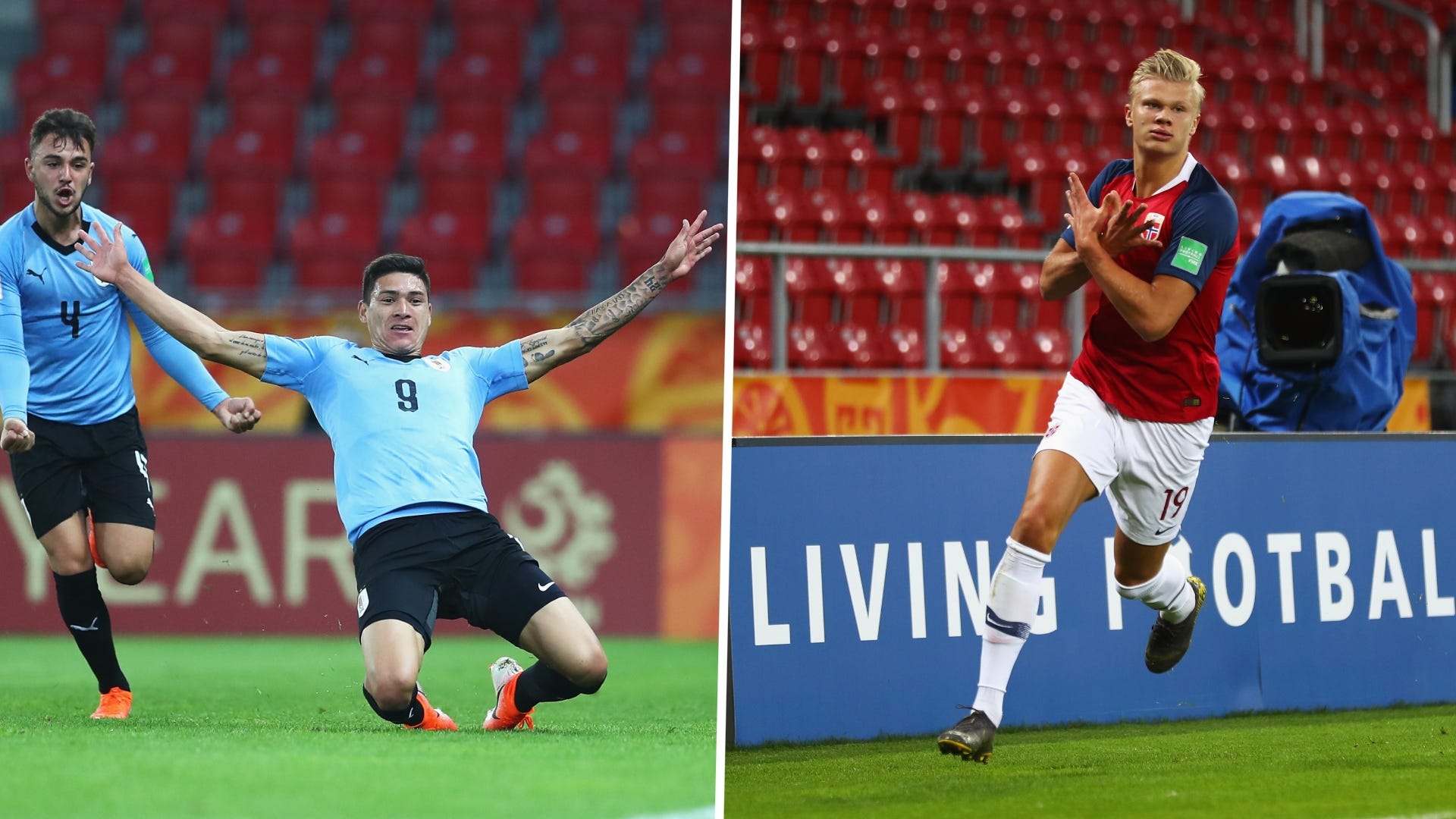 A glorified pre-season friendly, some call it, but not when Liverpool and City are involved. While bigger clashes and greater challenges await the Premier League’s ‘big two’, you can be sure that both Jurgen Klopp and Pep Guardiola will be hoping to land a psychological blow or two this weekend.

For Nunez and Haaland, too, it is the chance to lay down a marker. Both arrive in England with big reputations, and with big price-tags to justify.

A goal or two this weekend would be the perfect way to get under way at their new clubs, even if the real business doesn’t start for another week.

Both have already found the mark in pre-season, Haaland taking just 12 minutes to mark his City debut with a goal against Bayern Munich in Green Bay, and Nunez breaking his duck in spectacular fashion, scoring four times as Liverpool slapped RB Leipzig 5-0 in Germany.

Exactly what their managers will have wanted, as they plot the next phase of their sides’ evolution.

For both Klopp and Guardiola, the signing of a specialist No.9 represents something new, something different.

Both Liverpool and City have achieved significant success in recent years by eschewing the need for a ‘traditional’ centre-forward, but both have changed tack this summer, spending big in search of the next solution, and allowing previously vital players – Sadio Mane and Raheem Sterling in particular – to depart in the process.

How quickly Nunez and Haaland settle, and how quickly their team-mates are able to adapt to their new striker, will go some way to deciding this season’s title race.

Liverpool and City have the most clearly-defined style of play in the league, perhaps in Europe, and it will be intriguing to see where and how these two fit in. 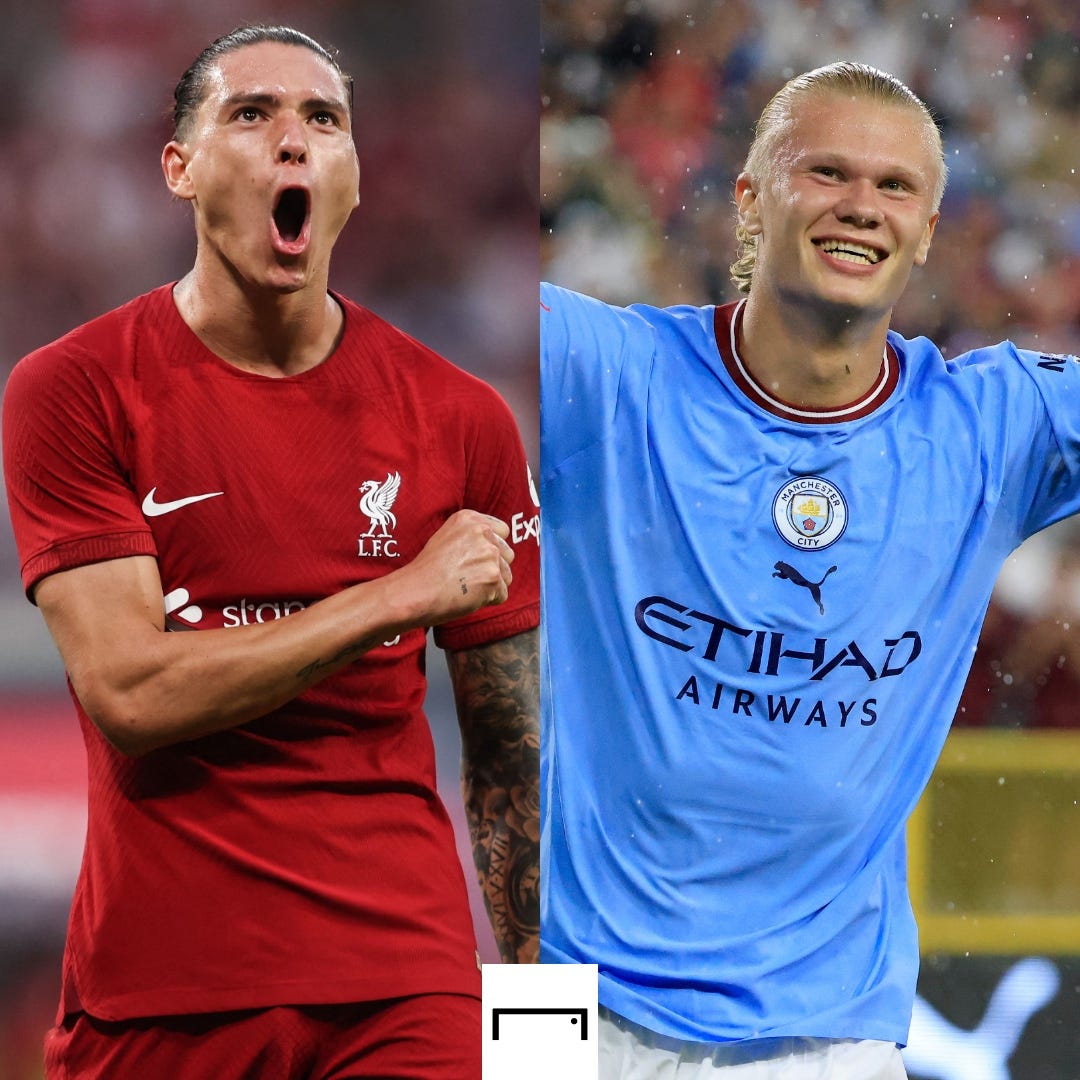 Teething problems are inevitable, regardless of the quality of those coming in.

Guardiola, too, expects a period of adaptation, though his recent comment that “we are going to put as many balls as possible into the box” suggests his instructions to his side will not be too complex.

At City, he has created a world in which diminutive wide-players such as Sterling or Phil Foden have been trusted to lead the line centrally.

Jack Grealish did it at times last season, and Kevin De Bruyne, Bernardo Silva and even Ilkay Gundogan have all had spells in the ‘False Nine’ hot seat.

Meanwhile, more ‘familiar’ centre-forwards, such as Gabriel Jesus and even the great Sergio Aguero, City’s all-time record goalscorer, had to be content with squad roles or, in Jesus’ case, re-invent themselves as wide attackers.

Liverpool’s system, on the other hand, has for so long been built around Roberto Firmino, perhaps the modern player most associated with the ‘False Nine’ role.

The Brazilian’s desire to press, and the fact his natural instinct is to come towards the ball, has been vital in enabling Mane and Mohamed Salah to prosper as inside forwards, which in turn has allowed full-backs Trent Alexander-Arnold and Andy Robertson to become the team’s creative fulcrum.

Nunez, as Klopp readily admits, is a different kind of striker, one who scored 34 goals for Benfica last season, and who offers more of a penalty-box presence than Firmino or Diogo Jota.

He did well in Portugal cutting in from the left, but with Luis Diaz having nailed down that particular role since his arrival from Porto in January, we can expect to see Nunez operating centrally for the most part.

That, together with the new man’s preference to make runs in behind as opposed to coming short, opens up new attacking avenues for Liverpool, though it also presents new puzzles to solve.

“When Darwin offers a run we give him the ball all the time, which is not helpful,” Klopp explained after Wednesday’s defeat against Salzburg.

“Because often a guy who stretches the opponent is there to create space between the lines, and this kind of thing.”

If that sounds a tad negative, it shouldn’t. Klopp is as excited by Nunez as he was about Mane or Salah, and Liverpool’s players witnessed first-hand how dangerous the 23-year-old can be in last season’s Champions League quarter-final.

“We knew he was a special player then,” says Alexander-Arnold, who said the squad were “excited” when it became clear Nunez was in the club’s sights.

He may need time before we see him at his full capacity, and the same may well go for Haaland, although the common consensus is that the Norwegian has a higher ceiling and is more of a sure thing. Given his scoring exploits for Dortmund, Salzburg and Norway over the past three seasons, it’s hard to argue.

This weekend, then, we will get our first glimpse of the future. From Lodz to Leicester, Nunez and Haaland have come a long way in three years.

Goalscoring, specialist No.9s at the top of the Premier League? It’ll never catch on, surely…