Jose Mourinho was sour in the aftermath of another big-game defeat, claiming that his opposite number was leafing through the Conte playbook

It all came together for Chelsea and Frank Lampard on Sunday. There were two keys to him overcoming his mentor Jose Mourinho in the 2-0 Premier League win against London rivals Tottenham.

The first was a rousing team talk at Chelsea's team hotel, where the Blues boss recalled his old battles against the club's greatest rivals, leaving the group pumped up to repay both him and the fan base.

Secondly, Lampard scrawled a 3-4-3 formation on the team sheet which was, in part, helped by the fact they had no midweek match for the first time since August.

Chelsea's players showed the desire to implement his plan; the result saw Mourinho tactically outwitted by a manager on who he has had a huge influence.

The sheer domination enjoyed by Chelsea left Mourinho riled up in his post-match press conference, claiming Lampard is merely an Antonio Conte clone for using the 3-4-3 formation.

"In fact, I think Conte’s system was an incredible one that won the league with Chelsea," Mourinho said of the tactical battle.

Those bitter words comparing Lampard's side to Conte's Chelsea title winners of 2017 should be taken as a compliment. Lampard had got under Mourinho’s skin and overcome a horrible league run of four losses in five games.

Despite that form, the Blues swatted aside Spurs comfortably with a domination of possession and Kepa making only one save across the 90 minutes. 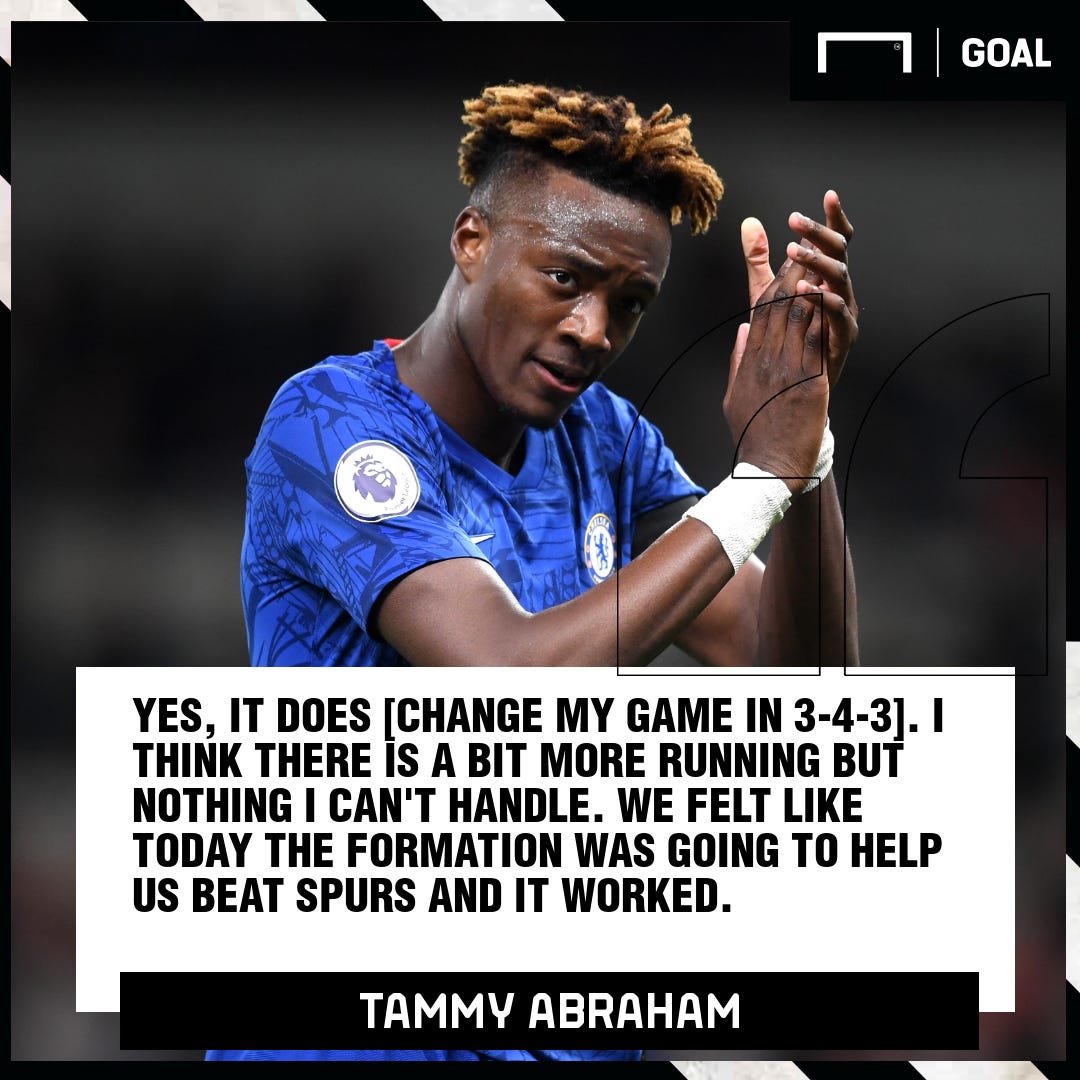 Recalling Marcos Alonso after a month-and-a-half out of the team was a masterstroke by Lampard. The Spain international has proven himself a better wing-back than full-back, for better or worse, and delivered a top-class performance.

He also helped Willian expose Spurs' weakness - Serge Aurier. The Brazilian switched from his usual right-wing spot to the left and his two goals marked him out as the match-winner.

Aurier couldn't deal with Willian in the one-v-one situation for the opening goal and the Blues veteran produced his trademark cut-inside and shot to stun the home crowd.

The second goal came from Willian's pass to Alonso, who was fouled by Paulo Gazzaniga for the penalty. Willian coolly slotted it away for 2-0 just before half-time with both goals coming from the left-sided pair tormenting Aurier.

Willian was complemented in attack by brilliant academy pair Tammy Abraham and Mason Mount. Abraham says the Blues have an adaptable identity under their new boss, which is a characteristic of Mourinho's Chelsea teams in years gone by.

"Yes, it does [change my game in 3-4-3]. I think there is a bit more running but nothing I can't handle," Abraham said when asked by Goal. "We felt like today the formation was going to help us beat Spurs and it worked.

"It was about everyone knowing their roles and sticking together as a team, defending as a team and attacking as a team. Today, we only had a short amount of time to practise on this formation but we did it before against Wolves and we had confidence it would work."

Lampard's assistant head coach Jody Morris mastered the 3-4-3 formation when managing Chelsea's Under-18s side while Conte was working with the Blues first team. 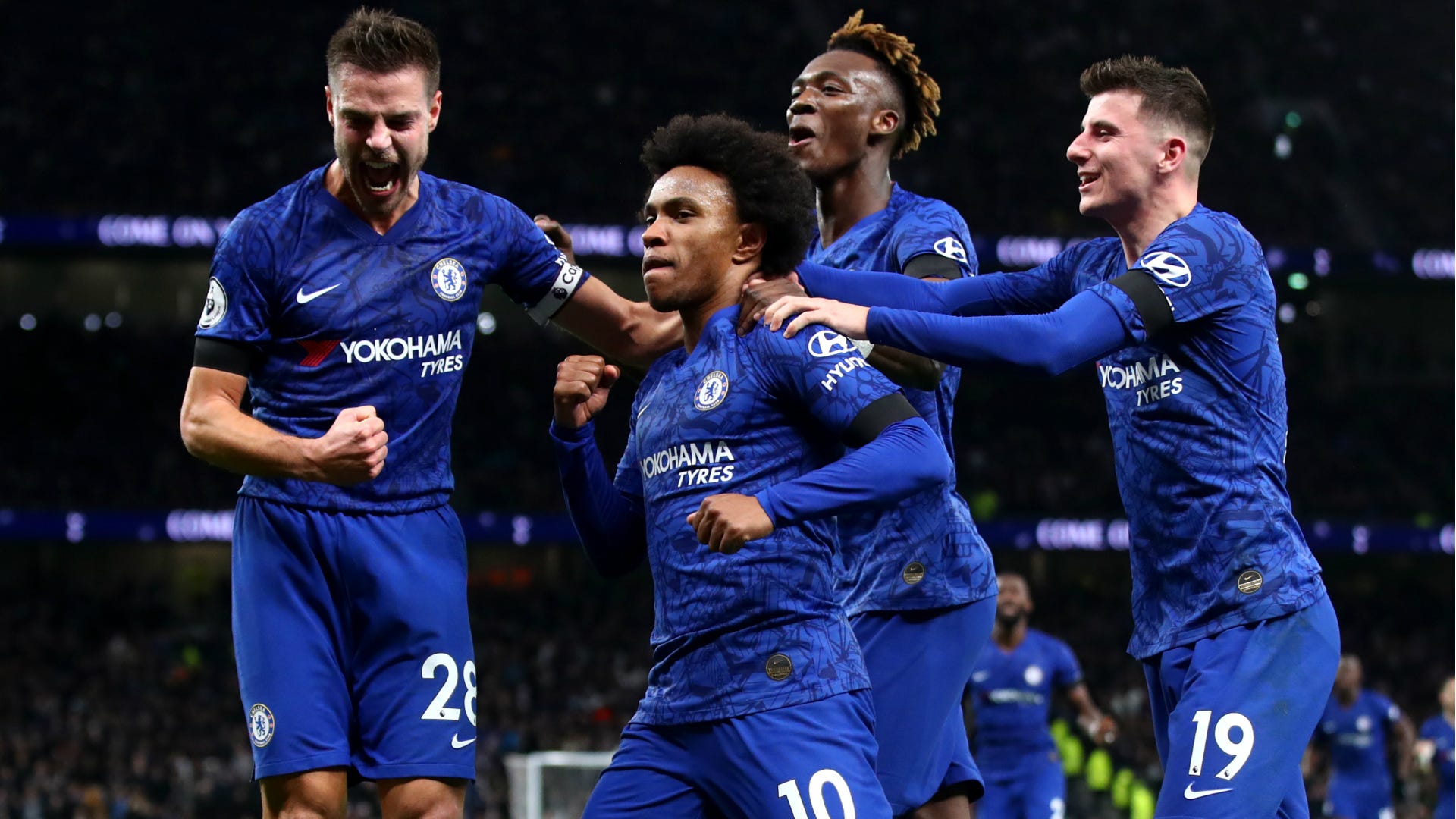 Chelsea's academy philosophy dictates that they create players like Abraham, who understands various systems due to the club's nature to hire and fire managers.

Therefore, Chelsea's performance against Spurs was more than a reincarnation of Conte.

It also spoke to the strong connection that Lampard already has with his players, achieved in only a short time as the boss at Stamford Bridge.

"From the beginning of the game, he said he has always loved this rivalry between Chelsea and Tottenham," Abraham added.

"If he could, he would have stepped on that pitch today and play. He just wanted us to go out there and leave it all on the pitch and from minute one, that's what we showed."

The use of man-marking, meanwhile, is more Mourinho than Conte with Kurt Zouma brilliantly harassing Harry Kane throughout the 90 minutes. The broader use of the back three helped nullify Spurs’ use of long balls. Zouma, Antonio Rudiger and Fikayo Tomori won their aerial duels and matched their rivals for pace.

Conte was almost too wedded to 3-4-3 at Chelsea, Maurizio Sarri was fully committed to 4-3-3 and, for Lampard, he will use a combination of the two. Although, the case for more usage of the wing-back system may be a legacy from the London derby.

"Yes, possibly [we will use it more],” the manager said. “Today, we know Tottenham play a lot of balls in behind. They go longer sometimes, can run and they are quick and dangerous so an extra centre-back was always going to work with that, you hope.

"In terms of keeping the ball, Tottenham we know are defensively very good but we wanted to use the sides of the pitch to open up the game. That takes a bit of bravery and confidence to come here and play, play, play like we did.

"We will see going forward. I think sometimes there’s an argument to play it. Sometimes we say do we need an extra defender? That’s for us going forward, so we will see."

Nonetheless, Chelsea’s identity now is a Swiss Army knife approach that will leave some managers scratching their heads when they hear the team news come in.

Lampard wants to win like Conte and Mourinho, but also connect with the fans. He succeeded and even lost his voice celebrating as he punched the air in front of the away end after the best win of his tenure so far.