While Gianluigi Donnarumma was sitting on a bench in Bruges on Wednesday night, Mike Maignan was saving a penalty from Mohamed Salah at Anfield.

The irony was lost on nobody, least of all AC Milan supporters.

Indeed, those bitter about Donnarumma's departure during the summer are revelling in Maignan already looking like a worthy replacement for a player now being forced to play second fiddle to Keylor Navas at Paris Saint-Germain.

As one Rossonero wrote on Twitter, "Maignan has more Champions League penalty saves this season than Donnarumma has minutes!"

Still, there's no getting away from the fact that losing Donnarumma for nothing remains a hammer blow for Milan.

His value had never been higher when he completed his free transfer to PSG on July 15. Just four days previously, Italy's No.1 had been named player of the tournament at Euro 2020.

Milan, then, could have made millions on Donnarumma had he still been under contract at the time – but he wasn't.

The two parties had been unable to agree terms on a new contract.

Despite embracing a far more sensible and prudent approach to financial affairs, Milan had offered the 22-year-old a 25 per cent pay rise which would have seen him earn €8 million (£6.8m/$9.4m) net a season; sufficient in the eyes of the club given his age, talent and the role he'd played in helping the Rossoneri return to the Champions League. 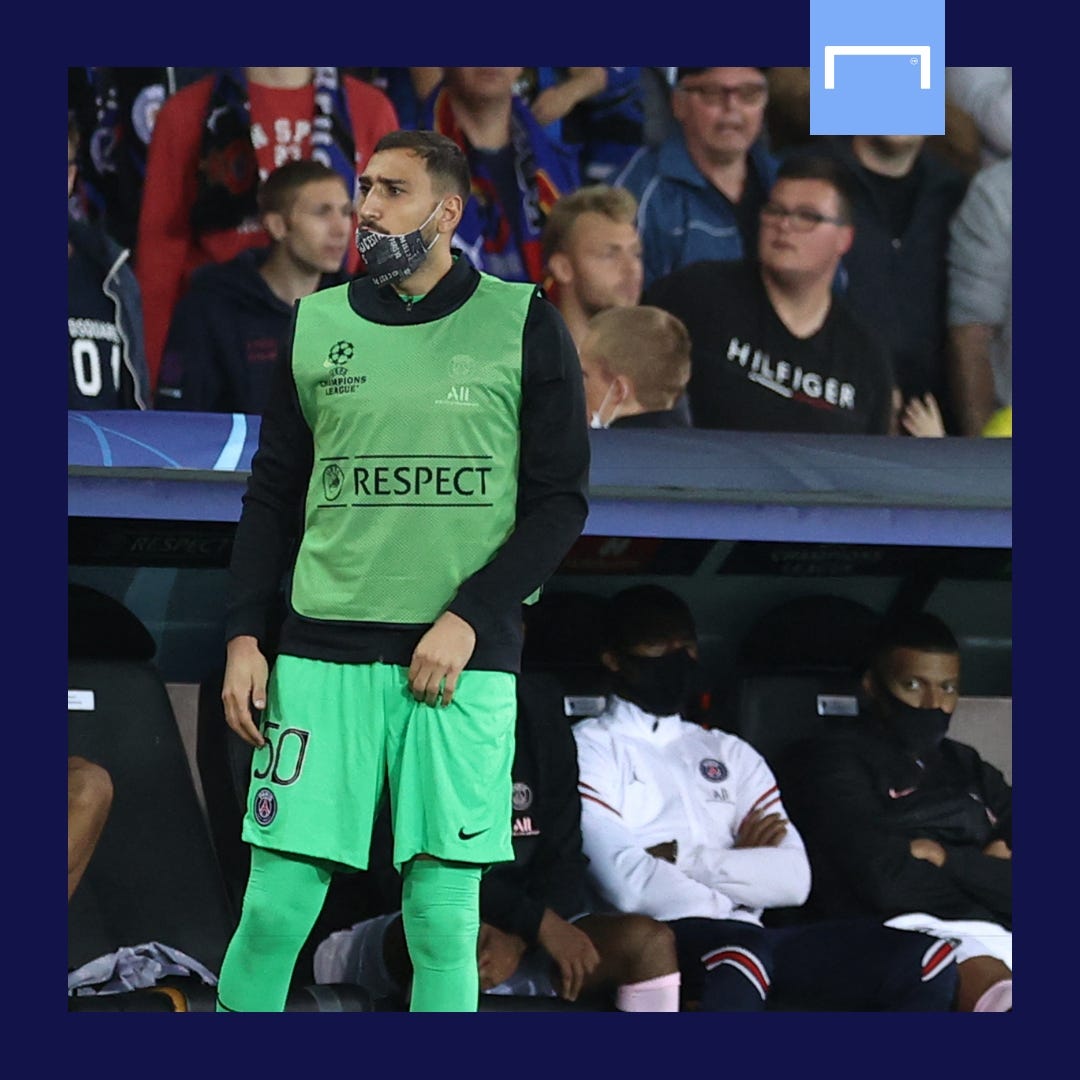 Nobody at Milan spoke ill of their academy product, at least not publicly. They instead wished him a fond farewell.

The fans were furious, though. The 'Dollarumma' nickname returned.

Milan supporters had long felt aggrieved with Donnarumma's refusal to commit his long-term future to the club that raised him and blamed agent Mino Raiola.

Some ultras had even gone to Milan's training ground before the end of last season to try to convince him to stay, urging him to become a one-club legend, like Paolo Maldini or Roma icon Francesco Totti.

Donnarumma ended that impromptu meeting in tears but he still ended up leaving in August, arguing that he and the club "had different ambitions".

Joining PSG undoubtedly meant challenging for the Champions League, while Milan are just happy to be back in it.

However, matchday one resulted in contrasting emotions for both sides.

PSG picked up a point at Club Brugge but were castigated for their uninspired display, with Lionel Messi, Neymar and Kylian Mbappe failing to click.

Milan, though, made a thrilling tournament return, pushing Liverpool all the way in an absorbing affair at Anfield.

The Rossoneri were second best for long periods, but turned the game on its head with a quickfire double just before the break, and piled on the pressure at the end before finally succumbing to a 3-2 defeat.

There were certainly plenty of positives for Stefano Pioli to take out of the game, chief among them Maignan, who is already being referred to as 'Magic Mike' by certain sections of the Italian press. 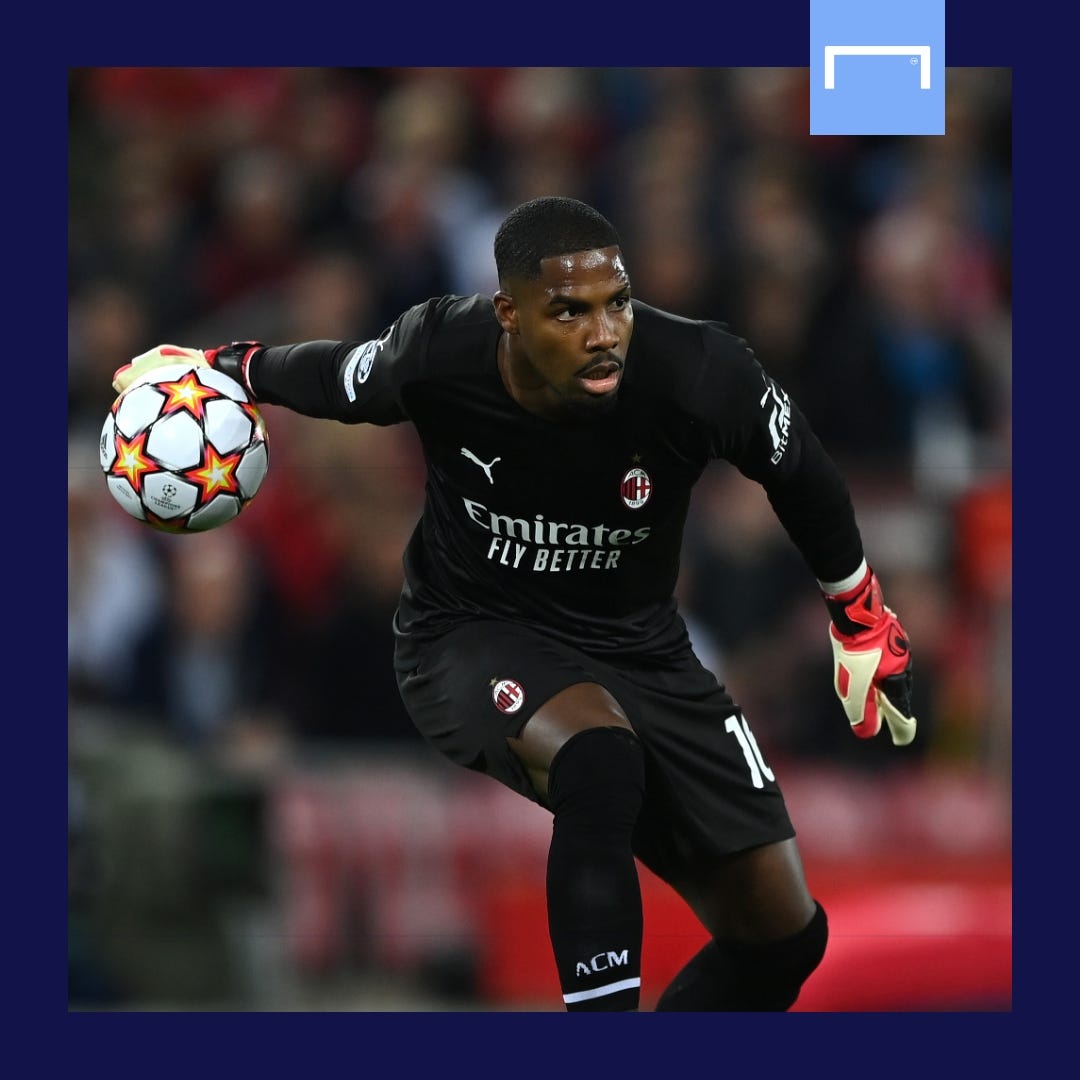 As well as denying Salah from the spot at a time when Milan were already 1-0 down and in danger of being overwhelmed, he also produced five other saves.

"He kept the Diavolo alive," the Gazzetta dello Sport enthused. "He produced his usual solid display and was precise with his feet. He directed the defence with a look of ferocious concentration.

"As it stands, given his efficacy and consistency, he's Milan's best signing of the summer."

Again, it is early days, but picking up a France international that helped Lille win Ligue 1 last season for just €13m (£11.1m/$15.2m) looks like yet another excellent bit of business by Milan technical director Maldini.

Would the Rossoneri have preferred to have kept homegrown hero Donnarumma? Undoubtedly, but Milan have no concerns over their first-choice goalkeeper right now.

The same cannot be said of Sunday's opponents Juventus.

The night before Milan and PSG began their respective Champions League campaigns, the Bianconeri opened with a comfortable 3-0 win in Malmo.

It was an encouraging and much-needed victory for Juve, who had picked up just one Serie A point from the first three games of Massimiliano Allegri's second stint in Turin.

The returning coach was particularly pleased with his side's defensive display in Sweden but it was telling that this wasn't just Juve's first clean sheet of the season; it was their first in any competition since March 2.

Now, the Bianconeri clearly have several issues to resolve at the back, but Wojciech Szczesny is undoubtedly the principal problem.

After initially doing a fine job of succeeding the legendary Gigi Buffon as Juve's No.1, the Pole is now under intense pressure after a succession of costly errors. 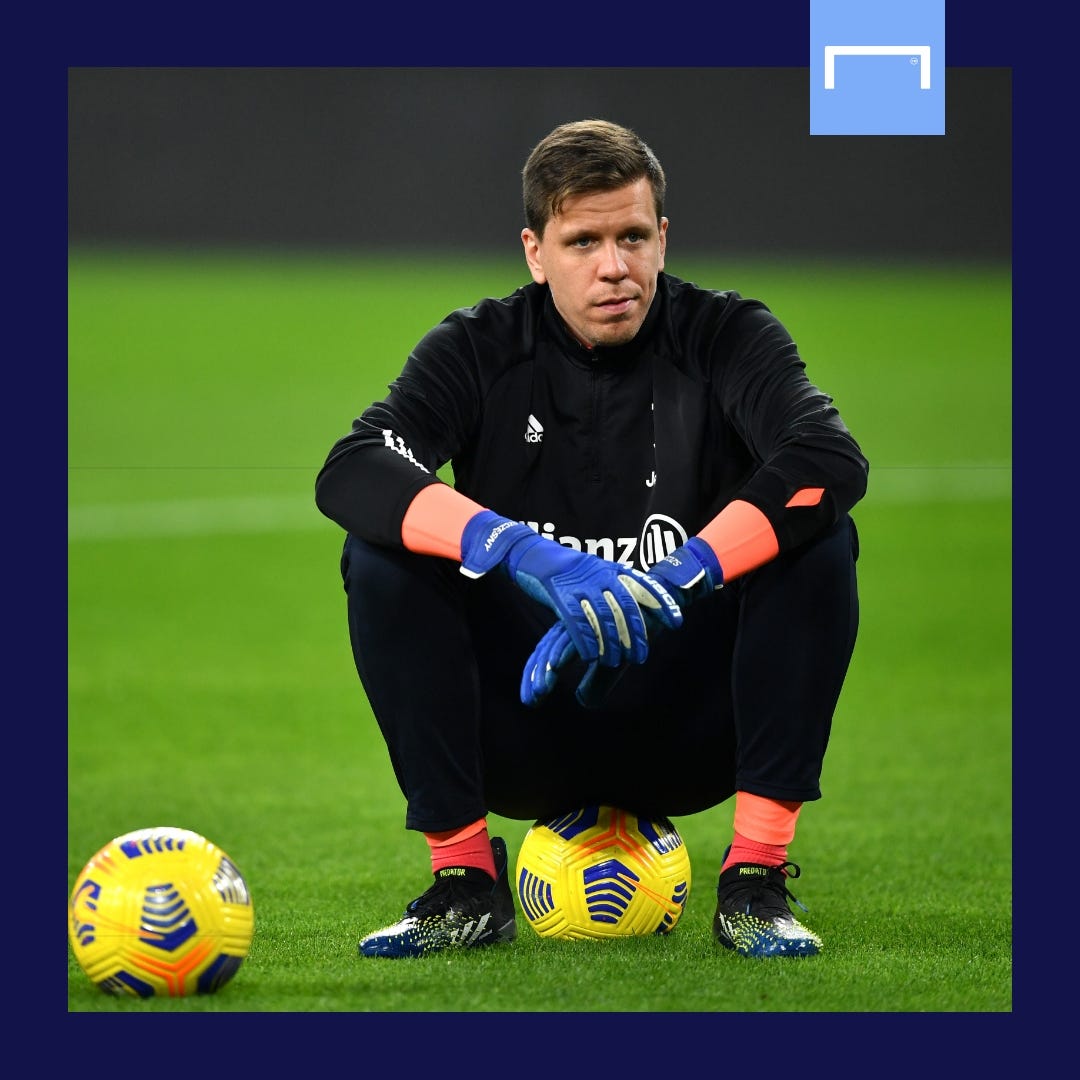 Last season, doubts emerged over his ability to deal with shots from distance, not least because of his failure to keep out Sergio Oliveira's long-range free kick in the Champions League last-16 loss to Porto.

In a 2-2 draw at Udinese on the opening weekend of the current campaign, meanwhile, he gave away a penalty after spilling a tame shot from Tolgay Arslan before then allowing Gerard Deulofeu to equalise from a botched clearance.

Allegri was quick to voice his support for Szczesny, telling reporters: "He's a great goalkeeper. It's not a question of technique, or technical errors, but more a question of understanding moments and that there's nothing shameful about launching the ball into the stand."

However, Szczesny’s shot-stopping was called into question again last weekend, with the former Arsenal man failing to hold on to a curling effort from Lorenzo Insigne – or at least parry it to safety. Matteo Politano pounced on the loose ball as Napoli went about turning a 1-0 deficit into a 2-1 victory.

So, Tuesday's clean sheet in Sweden couldn't have come at a better time for Szczesny, though, in truth, Malmo gave him very little to do. Milan represent a very different proposition altogether.

The Rossoneri have made a strong start to the Serie A season, and currently sit second with a 100 per cent record, separated from leaders Roma only by goal difference.

Given its importance to both participants, for very different reasons, Sunday's showdown in Turin would have been a massive game anyway, even before Raiola stirred things up on Friday by giving an interview to RAI Sport in which he attempted to use Donnarumma to make both Milan and Juve feel bad about themselves. 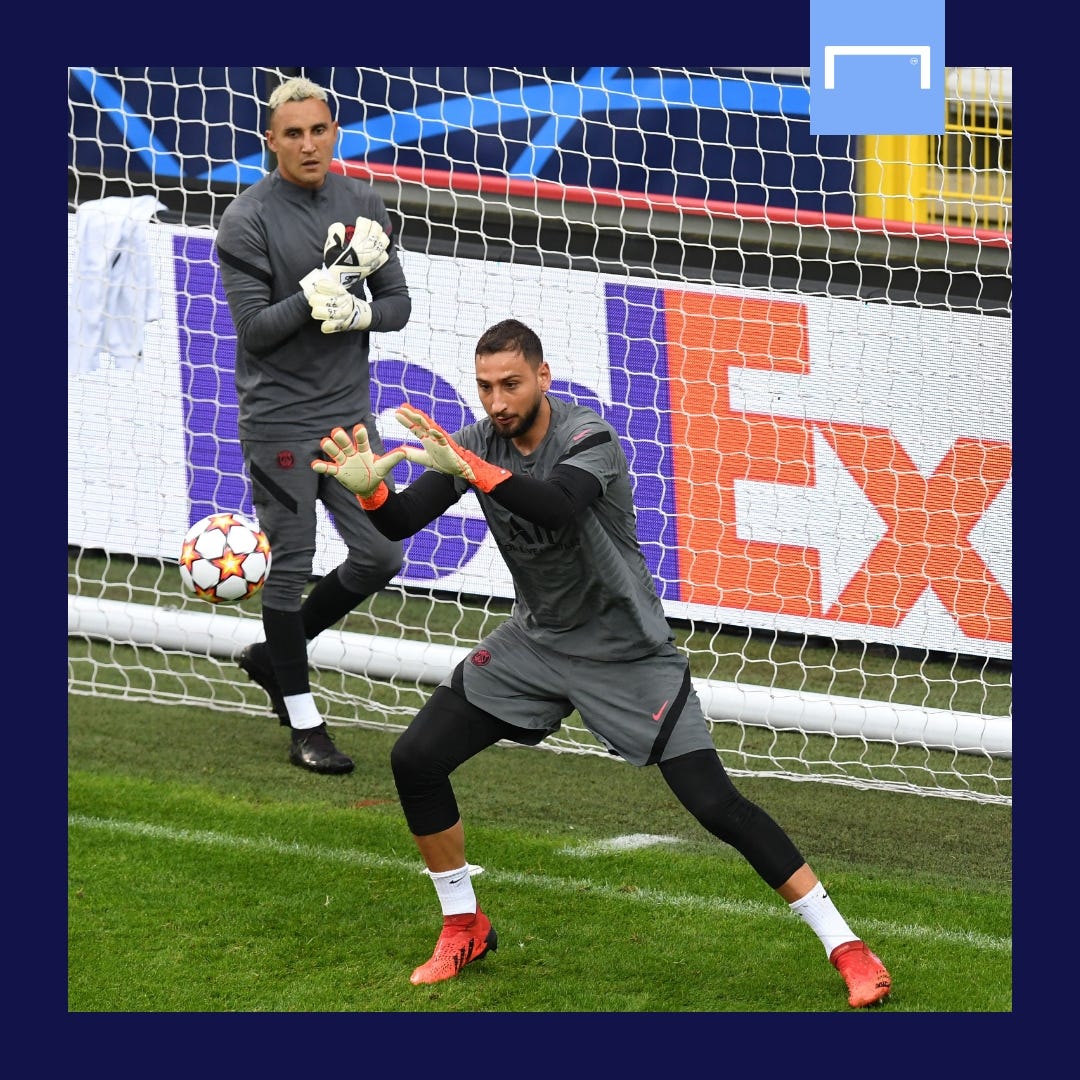 "I'm disappointed with how Gigio was treated," the agent said, alluding to the criticism Donnarumma had received over his Milan exit. "He made a life choice. Nobody has been betrayed. He could have left four years ago and he didn't."

Raiola then confirmed that Juve had been in a position to sign Donnarumma by adding, "I think that they still have a big regret over not having got him."

Annoying as it must be for them, many Juve fans would reluctantly agree with Raiola.

However, it is worth pointing out that Raiola’s revelation came on the same day that Juve announced a club-record loss of €210m (£180m/$246m) for the 2020-21 season, which rather conveniently helps explain why Juve felt they were no longer in a position to meet Donnarumma's wage demands.

As Juve's director of football Federico Cherubini told Tuttosport, "We already have a goalkeeper with a long-term contract (until 2024) that we still believe in.

“Because of the decisions that we're making [to balance the books], it wouldn't have made sense to do what PSG have done [with Donnarumma's deal].

"It would not have been an opportune time to create a situation where we have two great goalkeepers in the same squad."

Of course, the question now being asked is whether Juve have any great goalkeepers on their books right now?

PSG certainly have two now. And maybe Milan have one again too.