Massimiliano Allegri has questioned the Argentine's ability to lead the line, but Giuseppe Marotta intends to keep him in Turin for "a long time"

Paulo Dybala has been told by his own manager that he “cannot play centre-forward for a big club”, but Juventus intend to fend off admiring glances from Manchester United and Barcelona.

The Argentine forward sparked interest from big-spending sides across Europe on the back of his efforts at the start of the 2017-18 campaign.

As comparisons were drawn to iconic countryman Lionel Messi, a union with the Camp Nou talisman was mooted – along with a possible switch to Old Trafford.

Dybala has endured a dip in form since then, with talk of a breakdown in his working relationship with Allegri unlikely to be curbed by an admission from the Juve coach that the 24-year-old is not ready to lead the line at a heavyweight outfit.

Allegri told reporters of the South American’s role: “He cannot play centre-forward for a big club, where the distance to goal is much shorter.

“Just look at his best goals for Juve, they’re often when he’s running from deeper positions.”

Allegri has previously stated that high praise of Dybala has been detrimental to his form, with it too early to place him alongside the very best in the business. 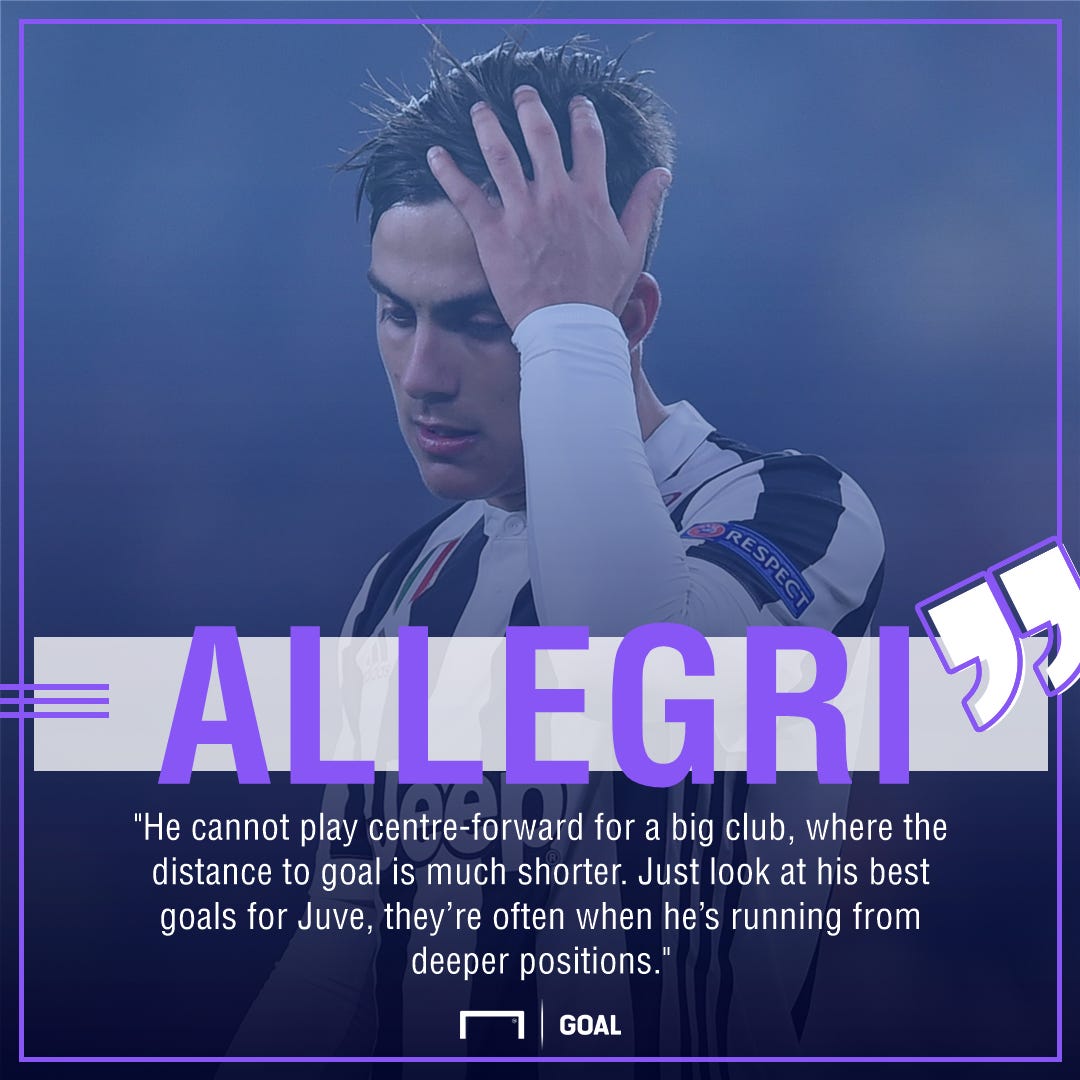 He said: “The comparisons which were made at the start [of the season] were damaging for Paulo, but fortunately he’s a smart lad and he understands you can’t compare a lad of 24 to two sacred monsters of football [Messi and Cristiano Ronaldo], who have won 10 Ballons d’Or.”

While Allegri is eager to keep Dybala grounded, general manager Giuseppe Marotta has revealed that it is Juve’s intention to retain the talented frontman’s services for the foreseeable future.

Responding to the ongoing speculation surrounding the Argentine, he told Rai Sport: “We want Dybala to stay with us for a long time.

“At the start we invested a figure that might not have been adequate for that time, but the player has shown to be in tune with our valuation and has represented enormous value.

“He has had some difficulty, but that is normal for a young player. We are patient with him and I am sure he is going to repay our trust, but we are not expecting extraordinary things from him every Sunday.

“We want to continue with Paulo for a long time.”

Despite his struggles for consistency this season, Dybala has still managed 17 goals in 27 appearances across all competitions – with the target found three times in his last three outings.