Almost a month after Brazil's abortive World Cup qualifier against Argentina, a most unexpected figure faces hefty punishment having been caught up in the messy aftermath of that farcical episode.

Once health agency ANVISA went on the record as saying that not just Emiliano Martinez, Cristian Romero and the rest of the Albiceleste's Premier League contingent, but any player coming from the United Kingdom would have to meet quarantine requirements, the magnifying glass turned on two blockbuster signings from the English top flight.

New Corinthians star Willian was stopped just in time from making his debut within the prohibited period, but Andreas Pereira slipped through the net.

The Manchester United loanee appeared for Flamengo for the first time just eight days after arriving in Brazil, and two weeks before ANVISA read of his case in the papers.

The midfielder now faces a maximum six-match suspension for his alleged flouting of the sanitary regulations, and it is a testament to just how bright he has looked since moving to Rio de Janeiro that such a sanction would be a huge blow to Flamengo at a critical stage of the season.

Pereira, 25, decided to take in his first taste of Brazilian football – he is in fact a dual national, having been born in Belgium and nurtured in the ranks of Dutch giants PSV prior to joining United – when it became clear his career at Old Trafford had stalled.

The timing could not have been more opportune. The Red Devils were keen to sanction another loan spell following similar moves to Lazio, Valencia and Granada, while the player jumped at the chance to represent a club of Flamengo's prestige and stature.

“Flamengo are the best club in the Americas,” he beamed at his presentation. “All foreigners and my club friends say that if they were to play in South America, it would be for Flamengo.

“My puppy is called [Flamengo and Brazil legend] Zico, my dad always used to show me his videos. I always liked his style.” 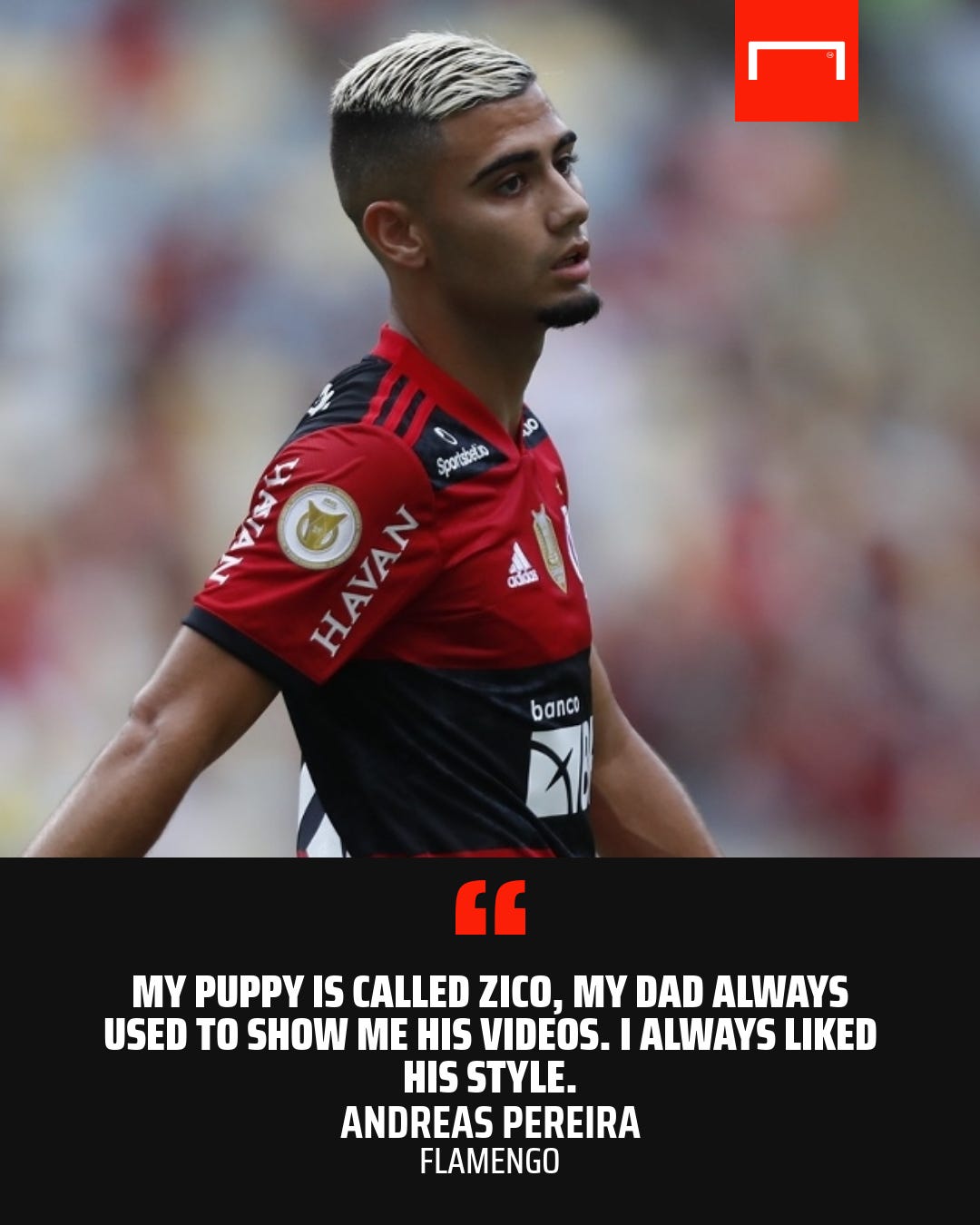 The Rio side too had everything to gain from Pereira's arrival.

While for the last three seasons Flamengo have arguably been the strongest side on the continent, and by some distance, coach Renato Gaucho had to adjust in the transfer window as Gerson, the cornerstone of the club's midfield, left for Marseille.

Typically for a team which has held no qualms over flexing its immense financial muscle, they swooped for not one, but two potential replacements, bringing in both Pereira and Kenedy to fill that creative gap.

The ex-Chelsea man has taken a while to settle in, but his former Premier League rival looks right at home, turning in a string of excellent performances in both Serie A and the Copa Libertadores to banish thoughts of the Estadio Maracana's former favourite now being in France.

“He plays more or less like Gerson, but he is much faster. He's also more dynamic than Gerson was,” Flamengo idol Junior, a team-mate of Zico's at both club level and in that wonderful Brazil side of the 1980s, told Globo.

“He fights very hard, he comes from a school of play, the English game, in which you need to battle, and that might have been what was missing in this Flamengo team.”

Pereira will now have to wait until Friday's Superior Football Sports Court hearing to find out if, or for how long, this most promising of starts will be interrupted.

He will at least be cleared for Wednesday's vital Serie A match against Red Bull Bragantino, which Flamengo need to win to keep in touch with leaders Atletico Mineiro at the top.

Key players such as Gabriel 'Gabigol' Barbosa, Giorgian de Arrascaeta and Everton Ribeiro are on international duty, meaning that Pereira's precise passing and steady presence in midfield will be more important than ever against dangerous, in-form opposition.

Fortunately, any potential suspension will not interfere with his pursuit of the biggest prize, the Copa Libertadores.

Flamengo powered past Ecuador's Barcelona to book a meeting with defending champions Palmeiras in November's final, an intriguing clash of styles which pits the free-flowing club against Abel Ferreira's dour yet supremely effective counterattack experts.

It is the stuff Brazil's stars dream of growing up, and represents a remarkable turn-around for a player like Pereira who, at the start of the transfer window, could hope for little more than another loan stint somewhere in Europe with scant prospects of either lifting trophies or impressing those in charge back at Old Trafford.

And who knows, if he keeps raising eyebrows at the Maracana, the midfielder could yet become an outside bet to make Brazil's World Cup plans in 2022, having already become their first overseas-born player in a century when he debuted for Tite's side in 2018.