Only two players have ever scored a hat-trick against Pep Guardiola’s Manchester City.

One of them is Lionel Messi.

The other is Jamie Vardy, and now he has done it twice.

The Leicester City striker knows exactly how to expose the flaws in Guardiola's high-risk philosophy, and did so again in another superb solo performance at the Etihad Stadium.

If likely new signing Ruben Dias didn not know it before, he will if he watched City’s performance on Sunday: there is no hiding place in Guardiola’s defence.

The Benfica defender should this week end City’s protracted search for a strong right-sided centre-back after appearing to bid farewell to his team-mates on Saturday.

But he will have had cold sweats if he saw the way City's backline were exposed in their shock 5-2 defeat to the Foxes that has handed Liverpool an early advantage in the Premier League title race.

At least for Dias he will not have to face Vardy until next year.

The former England international has now found the net eight times against City since Guardiola took over the Etihad, and here scored with each of his three efforts on goal, including twice from the penalty spot after earning them himself.

Even Guardiola knows Vardy is the perfect striker to expose the weaknesses in his strategy. “We play 40 metres in front, so it’s perfect for him,” Guardiola admitted last February.

More than six months on and nothing has changed.

There is no big secret to the way teams have discovered how to beat City: defend in numbers and then attack with speed.

It is the same rope-a-dope style used so effectively by Arsenal in last season's FA Cup semi-final and by Lyon in the Champions League six weeks ago.

City dominated early possession here against Brendan Rodgers' side, but there were warning signs when the lightning breaks of Vardy, Harvey Barnes and Dennis Praet threatened to catch them on the break.

With John Stones missing again due to not being fully fit, teenager Eric Garcia, who does not want to sign a contract extension amid interest from Barcelona, was left with the task of attempting to stop Vardy.

The young Spain international was blameless for Vardy’s first penalty after Kyle Walker was caught on the wrong side of the striker and needlessly yanked him down.

Vardy’s second, meanwhile, was all about his sharpness as he beat Garcia to Timothy Castagne’s cross and flicked a clever finish past Ederson. 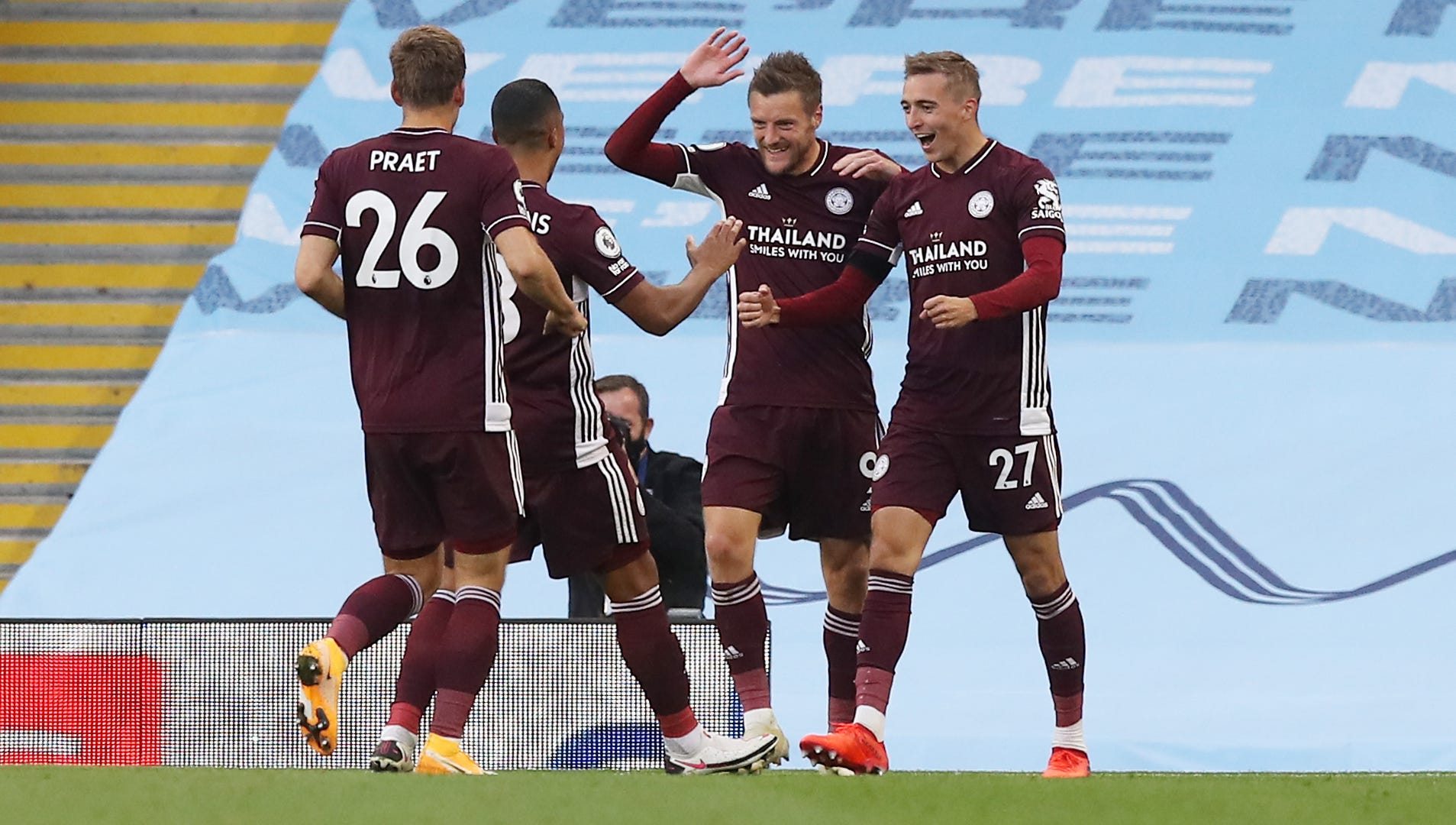 He then completed his hat-trick against after drawing a clumsy challenge from Garcia and leathering the ball home from the spot.

Substitute James Maddison scored the pick of the goals with a stunning 25-yard strike for the fourth, but it was Vardy who had done the damage.

And how City were crying out for a striker with his intelligence and ruthlessness after an opening 30 minutes when they dominated possession having gone ahead through Riyad Mahrez’s thunderous third-minute strike.

But with injured pair Sergio Aguero and Gabriel Jesus among the seven senior players missing, Guardiola is short of options.

Raheem Sterling made no impact as a central striker and by the time 17-year-old Liam Delap had got his bearings after being introduced off the bench the game was already gone, though the rookie did loop one header against the bar.

After Vardy was replaced there was still time for the impressive Youri Tielemans to add a fifth goal from the spot as Leciester became the first team to score five goals away to City in 20 years, and the first ever against a Guardiola team.

Guardiola blamed problems at both ends for last season’s lack of a title defence. Those issues remain, and therefore so is the threat of another early end to their Premier League challenge.