The teenage star made a goalscoring return to action for the Reds on Sunday, after almost five months on the sidelines with an ankle injury

For once, Jurgen Klopp was struggling to find the right words.

It was a warm September day at the AXA Training Centre, and the Liverpool boss had a pep talk to give. An important one.

What do you say to a young footballer whose world has just caved in, whose leg is in a plaster cast and whose pain and misfortune has been televised live in 100 countries?

Even Klopp, emotionally intelligent and as good a communicator as there is, found that one tough.

He needn’t have worried. Because if there’s one thing we’ve learned about Harvey Elliott by now, it’s that it’ll take more than injury to break this young man's spirit.

“When I saw him I was in a worse mood than he was, to be honest,” Klopp says of that Kirkby encounter. “But Harvey was like ‘Don’t worry, head up, I’ll be back stronger’ and this kind of thing.

“From the very first second, he was in a better place than the rest of us. He’s a really special kid.”

That much was clear on Sunday, of course, as Elliott made a dream return to Reds action.

After just under five months on the sidelines following that fracture dislocation of his left ankle at Leeds, the 18-year-old needed just 19 minutes to re-announce himself, scoring his first Liverpool goal in front of the Kop as Klopp’s side beat Cardiff 3-1 in the FA Cup fourth round. 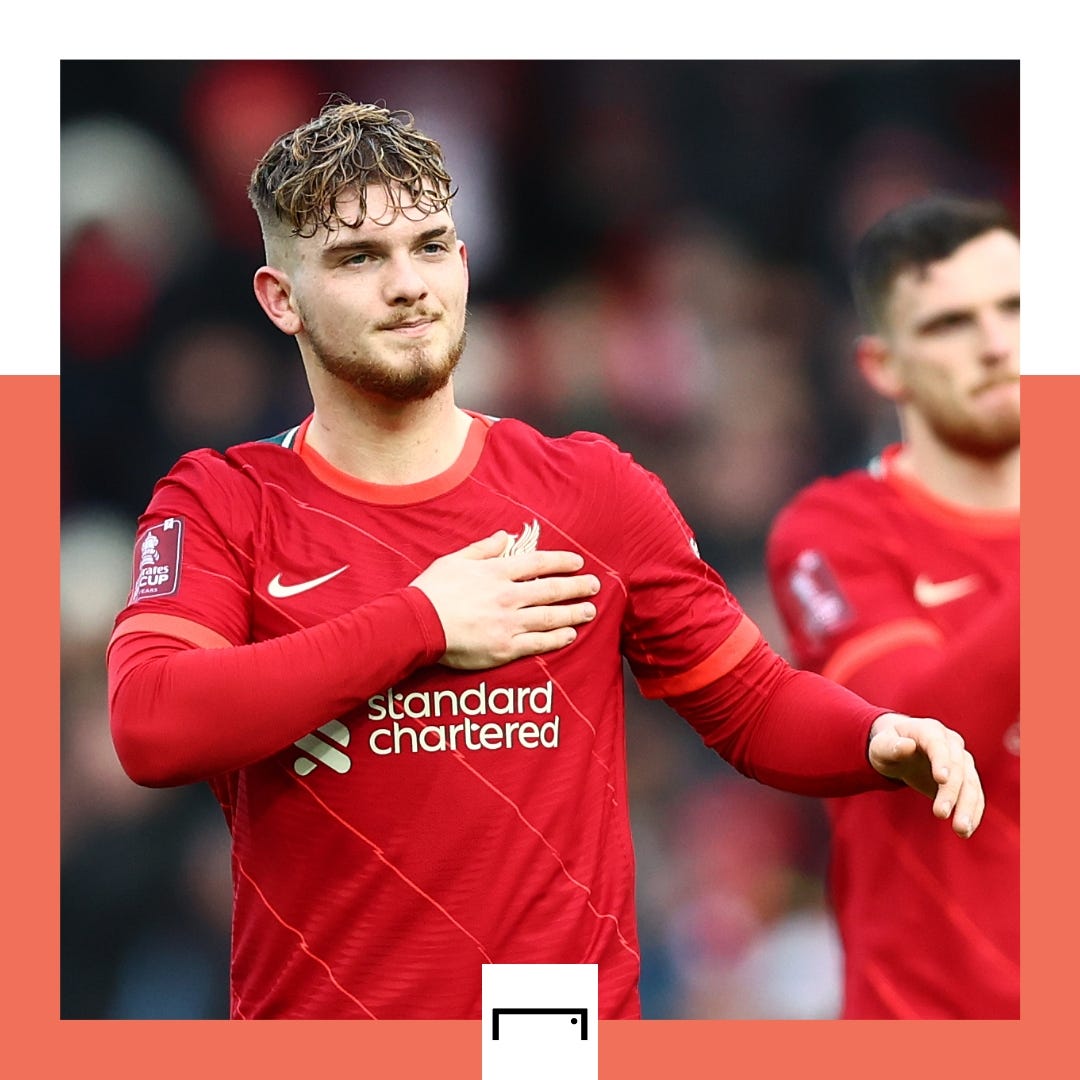 “A proper fairytale,” his manager called it.

In the stands, Elliott’s father, Scott, was filmed in tears, the joy and the emotion pouring out. He’s a lifelong Liverpool fan, and to witness his son do that, after everything he’s been through, must have been some feeling.

Speaking post-match, Elliott made sure he paid tribute to Liverpool’s medical team, and in particular Joe Lewis, the rehabilitation physio whose support and expertise has been key in getting him back on the pitch, on track and bang on schedule.

"He took me under his wing," Elliott said.

It was Mohamed Salah who got to Elliott first after the injury at Leeds, the Egyptian beckoning frantically to the bench as the youngster lay in agony with the game going on around him.

Chris Morgan, the first-team physio, and Jim Moxon, the club doctor, were the ones who attended to him. It was Moxon who put the youngster’s ankle back in place within 30 seconds of the incident.

By the time the final whistle had blown at Elland Road, Elliott was at Leeds General Infirmary awaiting treatment.

There, he encountered a 13-year-old boy, Jacob, who had broken his arm playing for Leeds JFC Pumas. They chatted, and Jacob eventually left with Elliott’s No.67 jersey, his right boot and new hero to worship.

A few days later, Elliott underwent surgery in London, an open reduction and internal fixation (ORIF), to repair the fracture and the damaged ligaments in the left ankle.

“His comeback starts now,” said Moxon in an update issued by the club, although he was quick to add that “we won’t put pressure on him by setting a specific timeframe beyond being able to say with confidence we expect him to feature again later in the season.”

The damage was significant, and made for some pretty gruesome pictures, but Elliott was back working in the gym at Kirkby within three weeks, and back jogging inside 10. 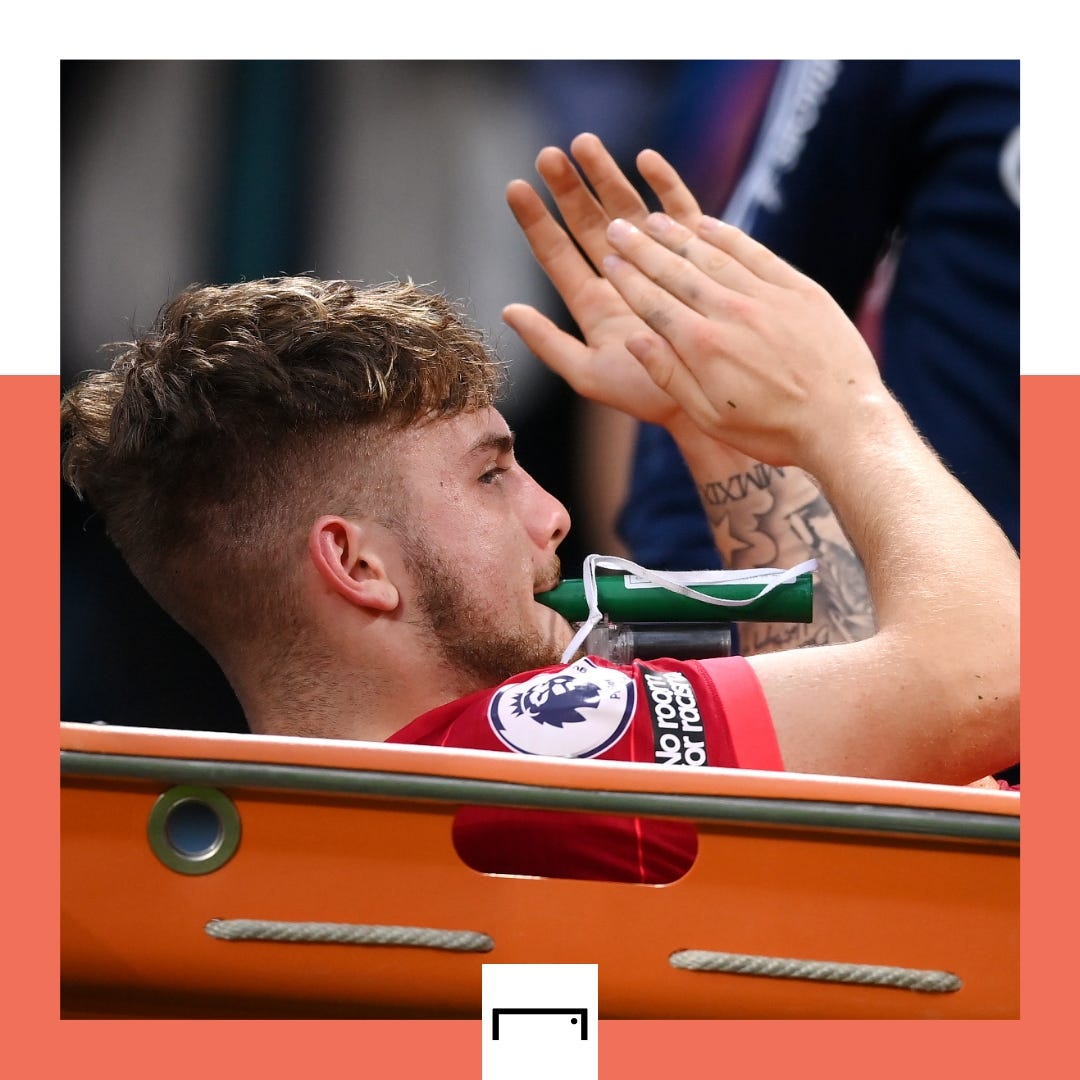 “Probably, his biggest talent is how ready he is mentally,” said Klopp on Sunday, and that was evident as he, in the words of one staff member, “attacked his recovery” – always listening, always willing to work, and rarely, if ever, allowing his mood to dip.

His attitude stood out a mile. Team-mates who had undergone long rehabilitation programmes themselves, such as Alex Oxlade-Chamberlain, Joe Gomez and Virgil van Dijk, were staggered by his positivity.

The senior players supported him, sending messages and making sure he was kept involved and engaged in any group chat or activity.

Elliott was there, wearing a protective boot, at Liverpool’s official team photograph at Kirkby, and made it clear that he was desperate to attend as many Anfield matches as possible.

“A lot of players don’t want to do that as it reminds them what they’re missing out on,” says one source close to the club. “Harvey, he was different. He never complained once, and he loved being around it all.”

It helped, undoubtedly, that progress was both smooth and rapid. Elliott worked hard with Dr David Rydings, Liverpool’s rehabilitation fitness coach, and by December he was pictured outside doing ball work at Kirkby.

“Back with my best friend,” he posted on social media.

A few weeks later he was cleared to return to team training. Klopp had watched some of his rehab sessions from the balcony outside his office and knew he was in good shape, but still he was nervous.

How would he look? Would there be any fear, or a reaction from the ankle? How rusty would he be? He didn’t need to worry. Elliott looked like he always did; sharp, bright and full of quality. Like he’d never been away.

“Let me say it like this; he didn’t lose his football brain!” said assistant manager Pep Lijnders, who said it would be “a crime” not to play the teenager soon.

“Some players never knock on the door, they run through it,” the Dutchman added. “Harvey is one of them.”

Klopp resisted the temptation to throw Elliott straight back in, leaving him out of the squad for the trips to Arsenal and Crystal Palace last month.

However, if you ever wanted an example of how highly Liverpool rate the player, the fact that they arranged a friendly, with the specific aim of giving him an hour’s run out, during the international break should do the trick.

Elliott, in typical fashion, lit the game up, scoring once and assisting twice as Wrexham’s youth team were beaten 5-1.

Afterwards, he again showed his class, gifting his boots to one of the opposing centre-backs, Ollie Hitchcox. Hitchcox is an Anfield season-ticket holder, and described Elliott’s performance that day as "beyond a joke".

And then came Sunday. Just as he dreamt it.

He first visited Anfield as a three-year-old, taken by his dad to a Champions League qualifier against Maccabi Haifa, and now here he was, receiving a standing ovation and, in front of the Kop, netting that first Reds goal.

He can say that again. We’ve known for some time that Harvey Elliott is a special footballer, but we now know he has the courage and the character to go with it.

After five months of graft, Liverpool’s gem is ready to sparkle again, brighter than ever.