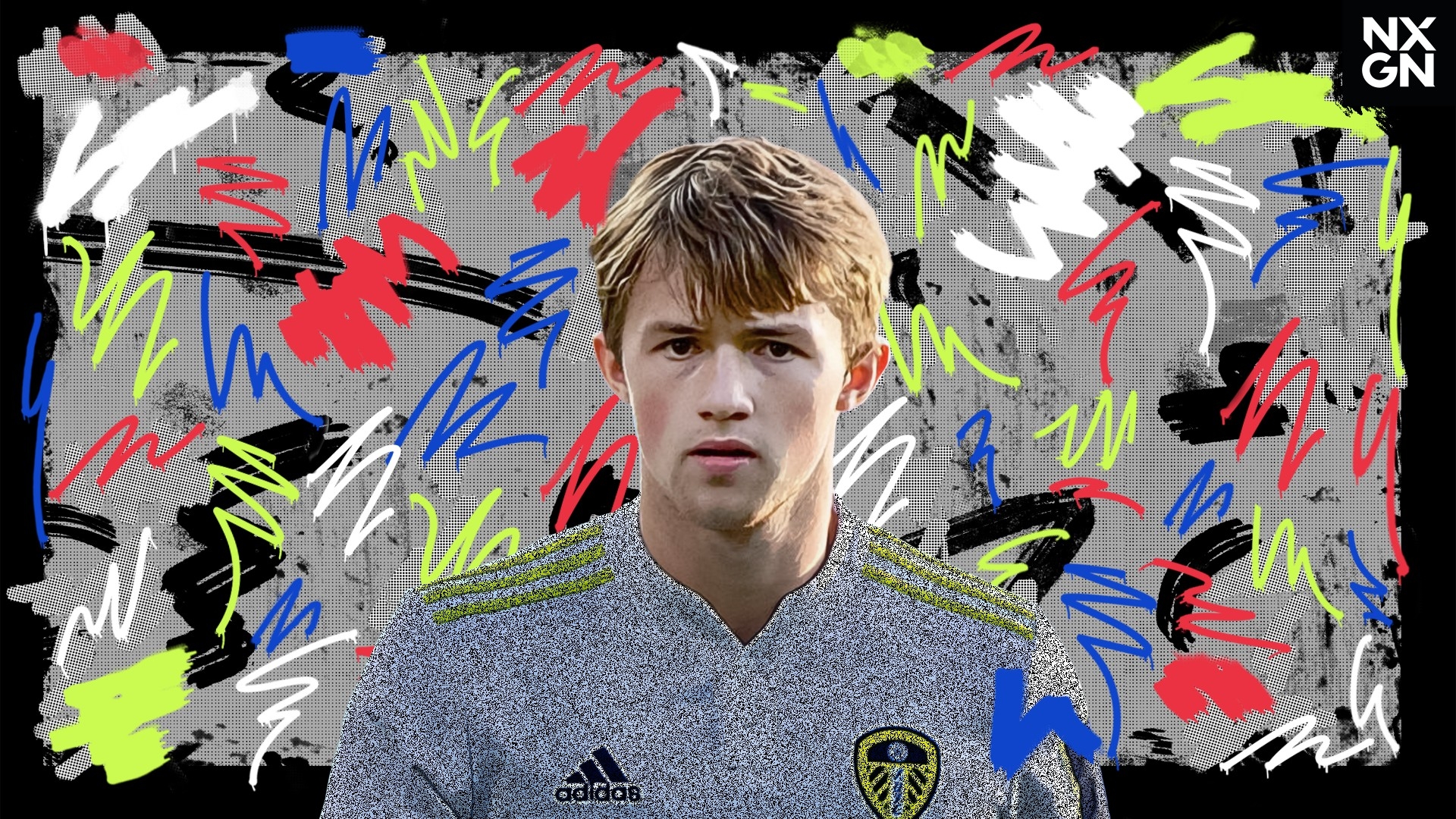 The 19-year-old has already made his first-team debut for the Elland Road outfit after they agreed to pay Wigan up to £1.6 million to sign him in 2020

They were the kind of goals which can send 'Football Twitter' into meltdown. A 35-yard thunderbolt and a 50-yard chip, both executed to perfection.

For regular watchers of Joe Gelhardt, though, they were simply the latest in a long line of spectacular strikes, and further proof, if it were needed, that Leeds United have a gem on their hands.

Gelhardt’s high-quality brace for Leeds' Under-23s at Liverpool in September certainly drew attention, though the man himself was disappointed not to finish the game with the match-ball, having missed a second-half penalty.

Not to worry. Two days later came a chance to put it right, this time for the first team, in their Carabao Cup third round tie at Fulham.

And so Gelhardt’s senior Leeds debut ended with him taking his side’s sixth penalty in a nervy shootout at Craven Cottage. Back home on Merseyside, his family covered their eyes.

They need not have worried; his kick was dispatched with aplomb, and Marcelo Bielsa’s side eventually made their way through. They will face Arsenal in round four, where Gelhardt will hope for another opportunity to shine.

Bielsa is certainly a fan. “He’s a player that always creates danger in a game,” the Argentine says. “He’s a player who’s more linked with the finishing of chances rather than the creation of them, but he has resources to beat an opponent and he has a final shot, a finish that is very good.”

Gelhardt has been knocking on the door at Elland Road for some time now. Having moved from Wigan Athletic in the summer of 2020, the 19-year-old Scouser’s development has been clear. Visible even.

“I’ve lost eight kilograms,” Gelhardt told the Yorkshire Evening Post in June. "There was a photo on social media when I signed, and one with the [U23s Premier League 2 Division Two] trophy, and you can see it.

“When I came in here I didn't have much information on nutrition or fitness levels, so I learned a lot.

“When I was in the condition I was in before I came, I was running eight or maximum nine kilometres a game. I think my average last season with the 23s was 10 or 10.5km per game.”

Bielsa’s intense training regime, including the infamous Tuesday ‘murderball’ session, means there is no hiding place. Fitness is everything, and Gelhardt’s family can see the difference in him since his switch to West Yorkshire.

He has never been tall. but he has always been strong, and now he is stronger, leaner, quicker and sharper. He looks like a Premier League footballer.

It will not be long before he officially is one, either. Gelhardt may be the star of the U23s at Leeds, having scored 17 goals in 22 games for them since the start of last season, but he is very much a part of Bielsa’s first-team plans too.

He has been on the bench several times already this season, and his top-flight debut is only a matter of time.

His family knew at an early age that they had a talent on their hands. His uncle, also called Joe, remembers spotting Gelhardt’s left-footed prowess at the age of eight or nine months, when he would throw a rolled-up pair of socks to him in his baby bouncer. Soon after, he was doing keep-ups with a full-size football.

Uncle Joe is also the one responsible for Gelhardt’s nickname, ‘Joffy’. The film 'Coming to America' was his favourite as a child, and so young Joe was given the title. Even his teachers, first at Netherton Moss primary school, then later at St Ambrose Barlow and Chesterfield High, would refer to him as ‘Joffy’.

Gelhardt grew up a Liverpool supporter, idolising Fernando Torres in particular. The Reds twice had the chance to sign him, both at pre-academy stage and as an U10s player, but passed both times. Gelhardt will always be a fan, but like his house-mate Sean McGurk (another player Leeds nabbed from Wigan), he enjoys putting one over the Reds more than any other side.

He spent time at both Everton and Tranmere Rovers as a youngster, but it was Wigan who signed him. Kenny Williams, the club’s head of academy recruitment, pushed hard to get him, having seen him score a hat-trick against the Latics for local side Marine as a 10-year-old.

Gelhardt scored another hat-trick, this time against Liverpool, during a six-week trial at Wigan, and his progress was smooth thereafter. He was often likened to Wayne Rooney, on account of his barrel-chested physique as well as his penchant for spectacular goals.

“He never failed to affect a game,” says Nick Chadwick, his former academy coach. “He was a dream to manage.”

Gelhardt was part of an exciting young Wigan U18s side which swept the board in 2019, winning the EFL Youth Alliance league title and cup, as well as the Lancashire FA Youth Cup.

The likes of Kyle Joseph [Cheltenham, on loan from Swansea], Jensen Weir [Brighton] and Charlie Jolley [Tranmere] from that side have already made inroads into senior league football, while McGurk and Alfie Devine, who became Tottenham's youngest-ever goalscorer in the FA Cup last season, have also emerged.

With Wigan struggling financially at first-team level, Gelhardt’s chance came in August 2019, emerging as a second-half substitute against Barnsley in the Championship. His second outing, a fortnight later at Hull, saw him score his first professional goal, a typically astute finish on his left foot in a 2-2 draw at the KCOM Stadium.

There would be 17 further appearances that season, including a couple of starts, but by the end of it it was clear he would need to be sold in order to balance the books. He did not want to leave, but knew he had to.

Leicester City wanted him, but Leeds were the ones who pushed hardest. Director of football Victor Orta, in particular, was instrumental in the deal, presenting a comprehensive video package, showing Gelhardt exactly how and where he would fit into a Bielsa team.

Anthony Barry was Gelhardt’s first-team coach at Wigan, and is now part of Thomas Tuchel’s staff at Chelsea, and cannot speak highly enough about his former charge.

“Joffy has the ability to become a very special player,” Barry tells Goal. “He has the capabilities to decide games and be destructive in the big moments, and not too many young players have that.

“To go with that, he is a great kid who loves playing football, and when you have that enthusiasm and appetite for the game, those types of players normally find a way to be successful.”

Gelhardt’s future, clearly, is bright, and there would be a certain poetry were he to make it at Leeds.

The screensaver on his mum Lynne’s phone is a picture of her sons at Elland Road, from when ‘Joffy’ was a ballboy at an England friendly against Costa Rica in 2018.

It will not be long, surely, before she can change it to one of him on the pitch in that famous white strip.