The German-born midfielder has thrived since joining the Bundesliga champions from Chelsea in 2019, with some likening him to Dele Alli

Bayern Munich's public pursuit of Callum Hudson-Odoi dominated discussions around Chelsea for the best part of six months in 2019, as the Blues battled to retain one of the best young talents to emerge from their academy in recent years.

The Bundesliga champions did all they could to bring the England international to the Allianz Arena, making four different bids – the last of which was worth £35 million (€38m/$42m) – while also offering Hudson-Odoi the No.10 shirt which was about to be vacated by Arjen Robben.

The saga was eventually brought to an end in September as the 19-year-old signed a new five-year, £180,000-a-week contract at Stamford Bridge having been convinced to stay by Frank Lampard.

But while the Blues were locking down one teenage star, another potential wonderkid was packing his bags to swap west London for Bavaria.

Like Hudson-Odoi, Musiala is represented by the First Access Sports agency, and though he was offered a lucrative contract to remain at Chelsea, he instead opted to return to the country of his birth on a five-year deal.

"I'm really happy about my years in England," Musiala said upon his arrival at Bayern. "There were a few interested teams in Europe. But if such a big club in Germany is interested, you can't say no. And I loved Bavaria from an early age."

Born in Stuttgart to a German mother and British-Nigerian father, Musiala began his footballing education at TSV Lehnerz in his hometown of Fulda before moving to England as an eight-year-old.

He spent some time at Southampton's academy before being snapped up by Chelsea, where he immediately impressed as he made his way through the various age-group sides.

Having made his England Under-15s debut while still aged just 13, Musiala was promoted to make his first appearance for Chelsea's U18s team just two months after his 15th birthday.

He would make two more appearances at that level in 2018-19 before opting to follow in the footsteps of players such as Jadon Sancho and swap one of the Premier League's top academies for a giant of the Bundesliga.

Musiala was initially placed into Bayern's U17 squad, for whom he scored in each of his first three appearances. He would add three more goals to his tally in a further nine matches before earning a promotion to the U19s in December.

Despite failing to score in eight matches at that level, Musiala still put in a number of eye-catching performances ahead of the coronavirus-enforced shutdown of football around Europe in March.

So much so that upon the game's resumption in June he found himself on the bench for Bayern Munich II in their third division clash against Preussen Munster, with Musiala able to make a 10-minute cameo towards the end of the game.

Six days later, and in just his third appearance at that level, the 17-year-old stepped off the bench to score both goals in a 2-0 win over Zwickau.

"The boy is ice cold," Bayern II coach, Sebastian Hoeness, said of the youngster after he became the second-youngest player to ever score for the team behind David Alaba. "If you talk to him before the game, he appears focused, calm and reserved."

His match-winning display earned him a third promotion of the season, with first-team manager Hansi Flick naming the teenager on the bench for Bayern's clash with Borussia Monchengladbach on June 13 before handing him a senior debut a week later against Freiburg, with Musiala becoming Bayern's youngest-ever Bundesliga player in the process.

Standing at 6'2", Musiala certainly has the physical attributes to compete at the highest level, even if it is felt that he needs to fill out more over the coming years to truly be able to hold his own against men twice his age.

Predominantly right-footed, he has been converted from a central striker into an attacking midfielder, with some likening him to Tottenham star Dele Alli or even a taller version of current Bayern club-mate Philippe Coutinho.

He has also been deployed as more of a box-to-box midfielder, or No.8, at times, and England are now working hard to ensure he represents them at international level as he approaches the senior ranks. 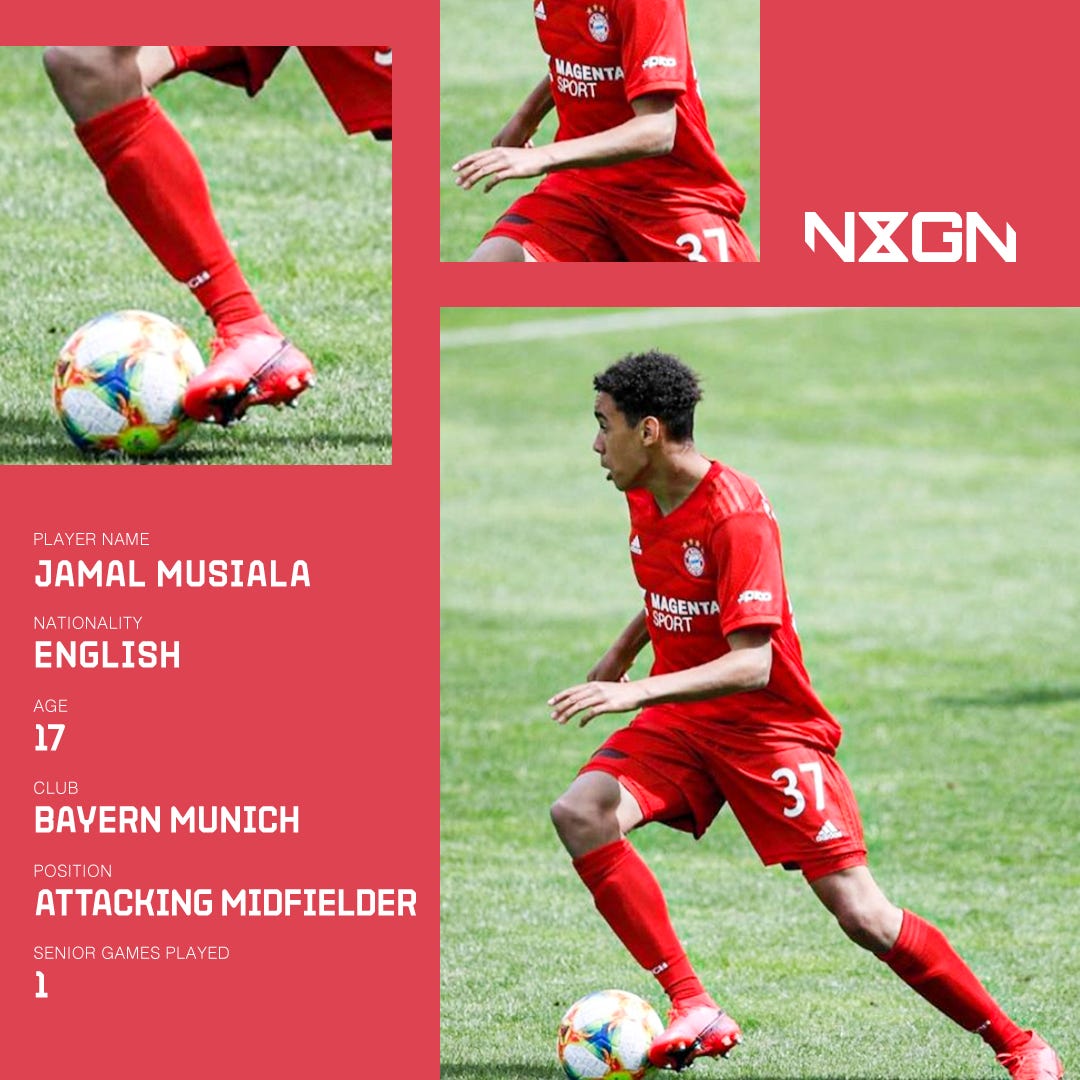 Despite making two appearances for Germany U16s, Musiala has played the majority of his schoolboy football for England as part of a generation of players born in 2003 who the Three Lions believe can emulate the side that won the U17 World Cup in 2017.

That team contained Sancho, Hudson-Odoi, Phil Foden and Morgan Gibbs-White, all of whom have gone onto make an impact at senior level with their clubs.

Musiala plays alongside the likes of Birmingham City midfielder Jude Bellingham, Liverpool winger Harvey Elliott, former Barcelona starlet Louie Barry and Celtic wonderkid Karamoko Dembele in the current squad, and it is hoped that he will stick with the country where he spent his early teenage years rather than the land of his birth.

Either way, it seems only a matter of time before Musiala continues his upward trajectory at Bayern. That failure to land Hudson-Odoi might not seem so bad after all if he does.