Gareth Southgate's side edged out Denmark in a thrilling Euro 2020 semi-final at Wembley, sparking wild scenes across the country

It has not come home yet, but football may be heading in that direction after England edged out Denmark in a thrilling Euro 2020 semi-final at Wembley on Wednesday to spark scenes of wild celebration across the country.

Gareth Southgate, the England manager who, as a player, suffered penalty shootout agony against Germany in 1996, has become the first coach since Sir Alf Ramsey in 1966 to book a final berth for the Three Lions at a major international tournament.

England did, as is customary, do things the hard way against a dogged Danish outfit but, after falling behind to a Mikkel Damsgaard free-kick, battled bravely to prevail 2-1 after 120 breathless minutes courtesy of an own goal from Simon Kjaer and Harry Kane's goal following Kasper Schmeichel's penalty save.

How the fans reacted

There were 60,000 supporters in attendance as England made history on home soil, with the vast majority of those getting behind the men in white to generate a spine-tingling atmosphere.

It was not just those at the stadium that enjoyed themselves, though, with a long-awaited party lasting long into the night from Cumbria to Cornwall.

Get the sound on right NOW! 🔊 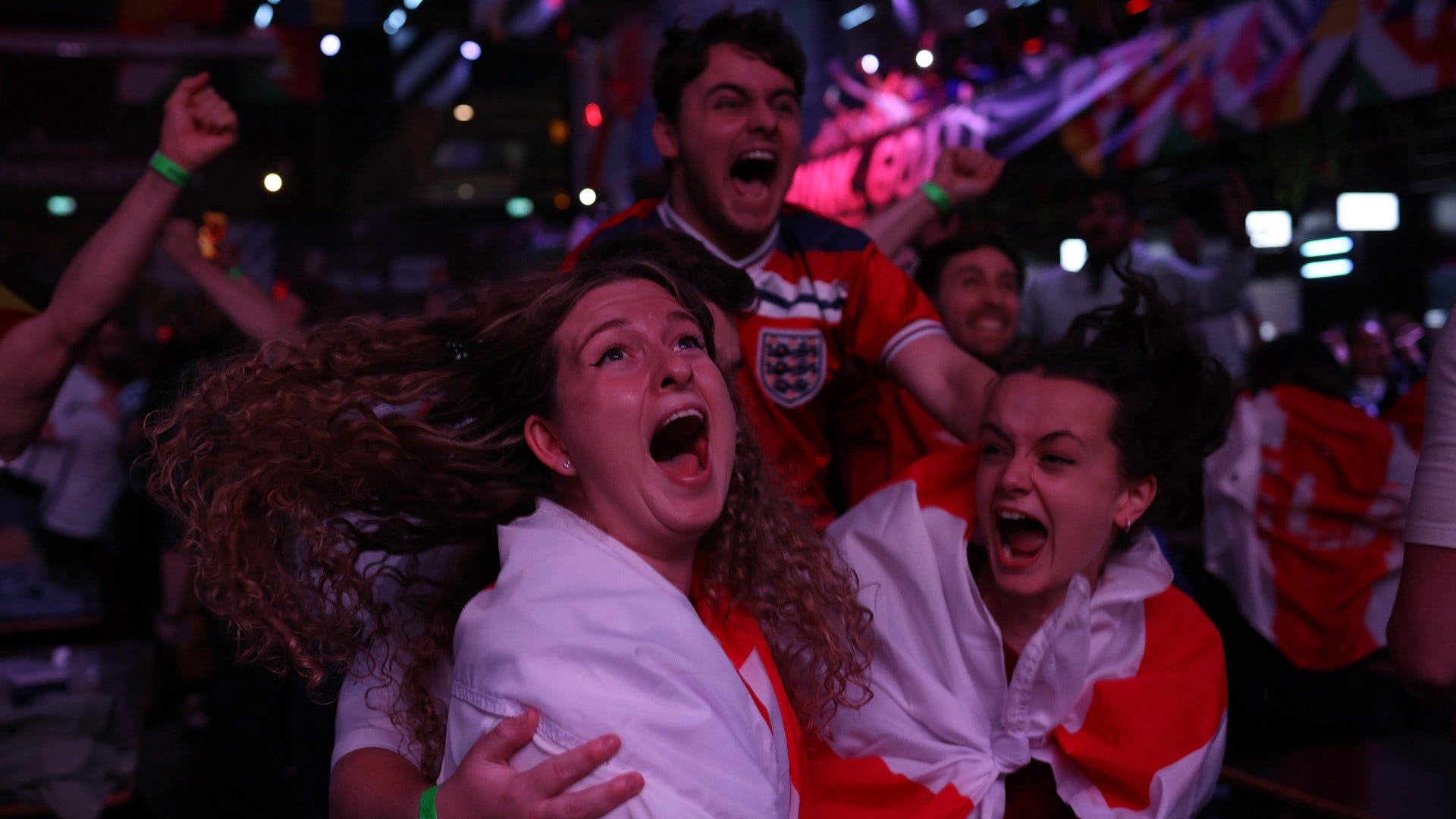 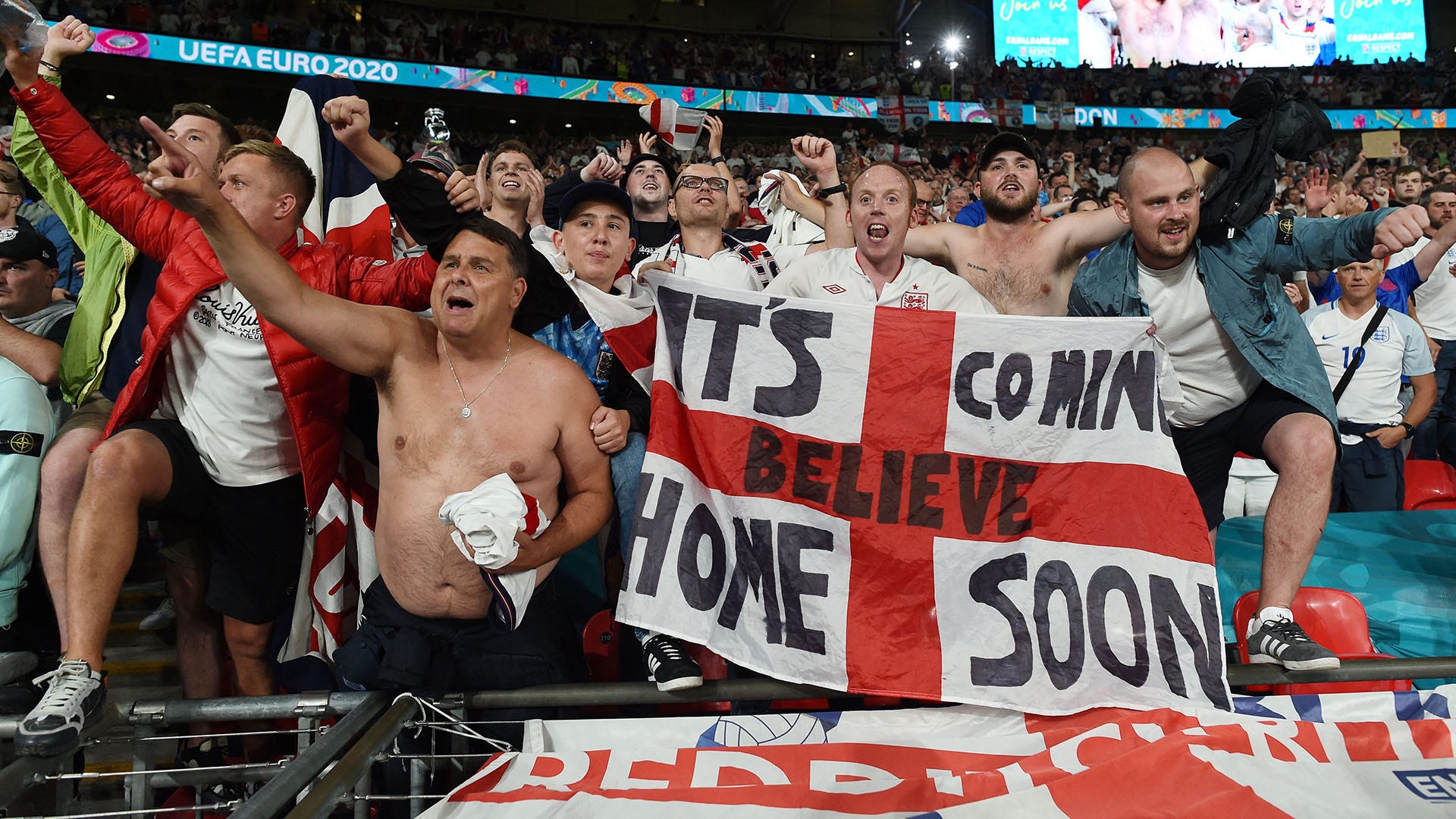 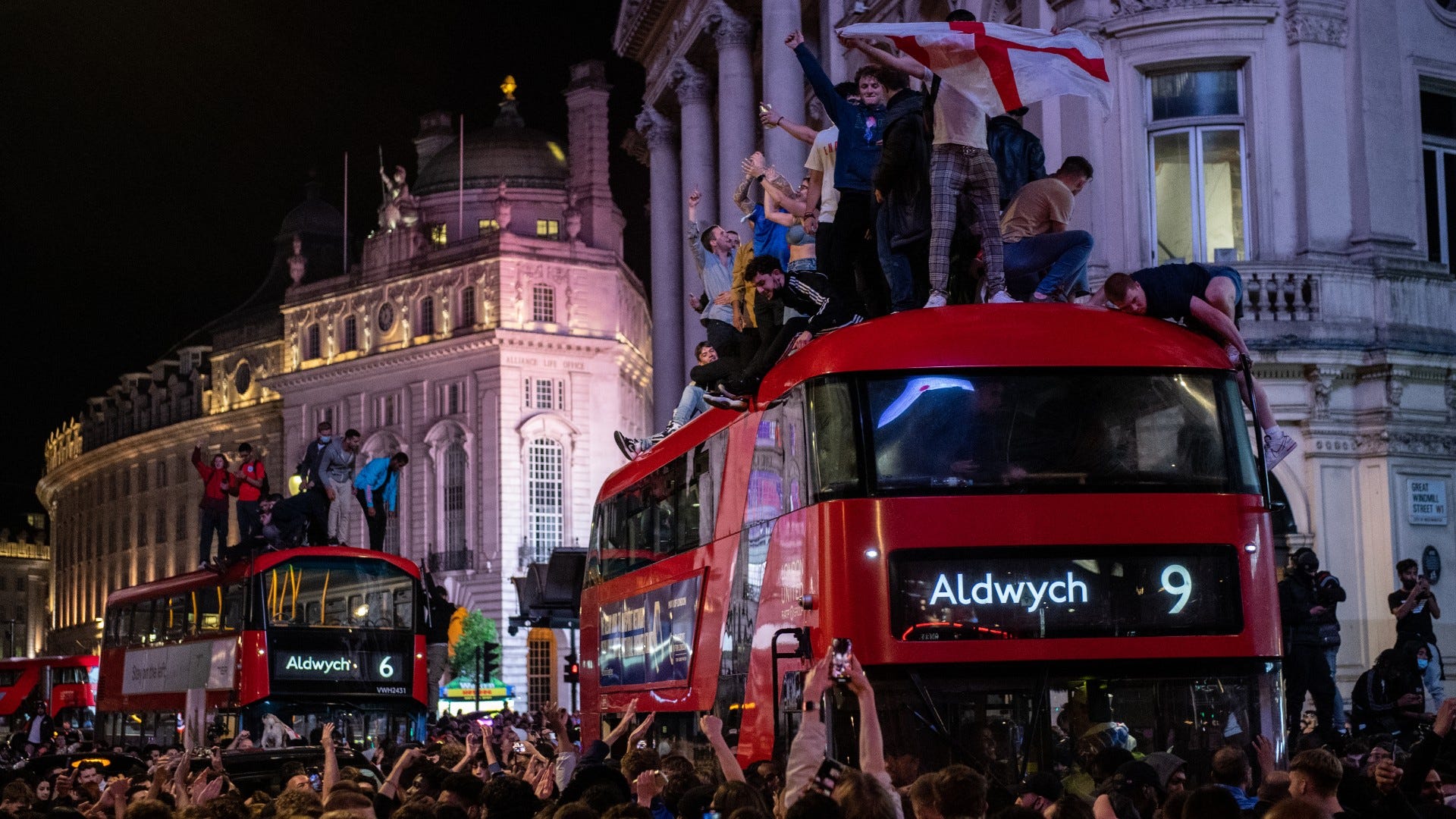 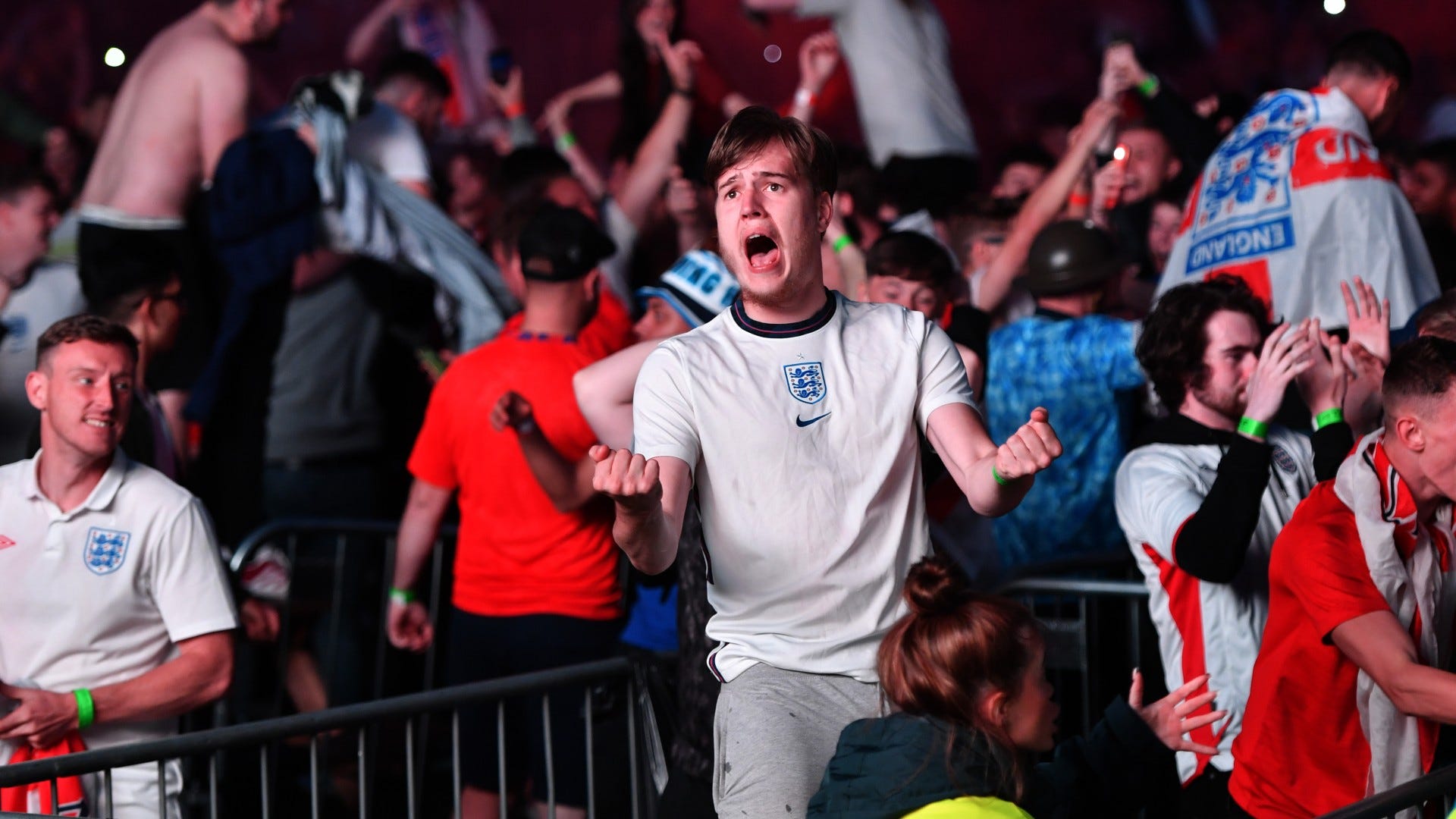 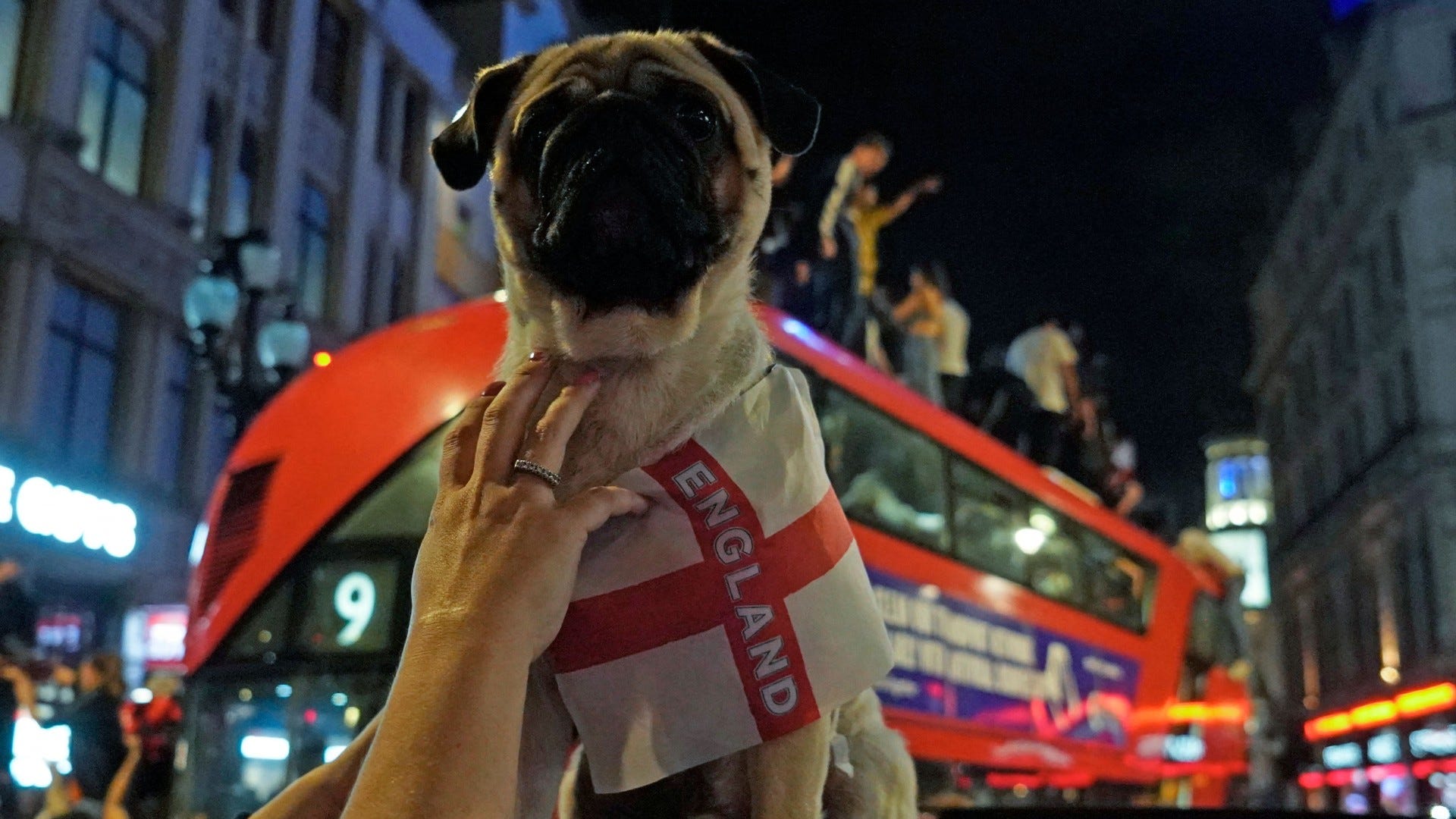 Just when you think #ENG winning couldn't get any better, you see this video. ❤️ #bbceuro2020 pic.twitter.com/XSNrLdUSyr

Some celebrity followers also got in on the act, with the exploits of Southgate's side capturing the imagination of a success-starved nation.

I was 16 months old when England last reached the final of an international tournament. It’s been a long, painful 55 years….
Thanks Gareth Southgate, ⁦ @HKane & the whole magnificent squad for finally putting us out of our agony. Now go win it! 👊 pic.twitter.com/ItFhlcZGaN

How the players reacted

There were 15 players that saw game time against Denmark, but England's success has been built around squad unity and collective spirit, with a 26-man party all pulling together.

They are now one game against in-form Italy away from cementing a standing as national heroes and landing a first European Championship crown for the Three Lions.

Southgate will not allow them to get carried away, with the job not done yet, but everyone was entitled to enjoy themselves on Wednesday evening.

Wow what a night! Unbelievable performance and we're into a Euros final!!! Wembley was incredible!! 🏴󠁧󠁢󠁥󠁮󠁧󠁿🦁🦁🦁 pic.twitter.com/dOnQq3lrhH

I love this team!! What a night at Wembley! ➡️ #EURO2020 final 🏴󠁧󠁢󠁥󠁮󠁧󠁿❤️⚽️ pic.twitter.com/BfhDROjZf7

Proud to be apart of this team. One more push. We will give it everything🦁❤️🏴󠁧󠁢󠁥󠁮󠁧󠁿 pic.twitter.com/B4tu8RwZsQ

Stuff dreams are made of. One more game to go 🙌🏴󠁧󠁢󠁥󠁮󠁧󠁿🏆 pic.twitter.com/tv1BxPgpkB

WE’RE IN THE FINAL 🤩🤩😅. Team were immense today 😍 what a night and what support from our amazing fans! See you Sunday 🏴󠁧󠁢󠁥󠁮󠁧󠁿❤️ pic.twitter.com/bwaurVGPbm

Put your hands up if you had a good night 🙌🏼… see you Sunday! pic.twitter.com/1MVkm6hiEk

Not much else to say about this group!! We kept fighting till the end. One more game to go! 🦁 🏴󠁧󠁢󠁥󠁮󠁧󠁿❤️ pic.twitter.com/Uu5Z1AoAIR

Proud of this team, History made! 🏴󠁧󠁢󠁥󠁮󠁧󠁿
Finals here we come! @England

This group is special & I’m proud to be a part of it. Unbelievable performance tonight by every single one of them. #euro2020 FINAL👏🏽🏴󠁧󠁢󠁥󠁮󠁧󠁿 pic.twitter.com/bKmBirnj2f

What a night!!! 🏴󠁧󠁢󠁥󠁮󠁧󠁿
I never knew Wembley could sound like that. We are in the final!!!
Thank you everyone for cheering us on tonight, one more big push. #euro2020 #england @england pic.twitter.com/I5AWtJmhyH