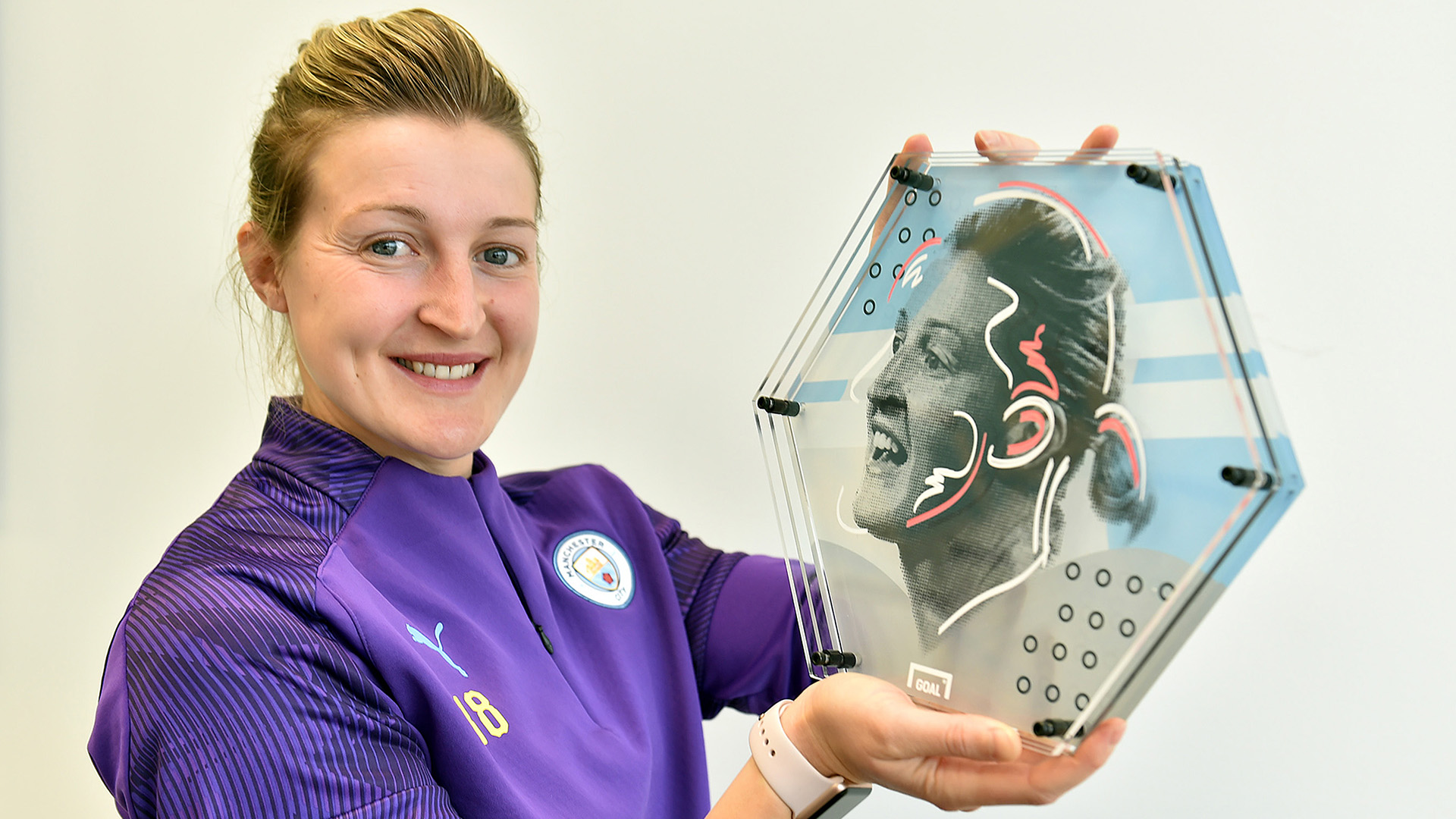 In an exclusive interview with Goal, the England international looks back on a remarkable year in which her 'glasses' celebration swept the nation

Every young aspiring footballer has their dreams – and Ellen White has achieved plenty of hers.

The 30-year-old has been to three World Cups now, represented Team GB at a home Olympics, won every major domestic trophy possible in England and scored a ton of goals in the process.

One thing that she never imagined as a young girl, though, was seeing her goal celebration sweep the nation.

However, after netting six times during England's rousing run to the semi-finals of France 2019, White was stunned to learn that her take on Anthony Modeste's 'glasses' pose had become a big hit back home.

“It blew my mind that loads of people started to do it,” the Manchester City striker tells Goal.

“I’ve seen loads of videos of when kids have scored and they do it. But I've also seen grown adults doing it – that one was really weird for me!

“Boys as well as men doing it. I think there’s been quite a big shift. A lot of lads have been watching the game and they are just seeing it as football.

“They just love sport and love watching football and they really were captivated as well.

“Hopefully, they’ll come back, come to some games and watch more of our games coming up.”

As well as being a key member of the Lionesses team that captured the hearts of the nation, White also claimed the Bronze Boot for her six-goal haul at the World Cup, playing a big part in her inclusion in this year's Goal 50, which, for the first time ever, was equally divided between men and women.

It's further evidence of how much the women's game has grown since White made her senior debut at 16 years old, in 2005.

Indeed, the forward has gone from a part-timer to a professional, and is now lining out for a Manchester City side blessed with some of the most impressive facilities in the world.

There were other offers on the table after she had decided to leave Birmingham City in the summer, but White never had any doubt about where she was going after speaking to Nick Cushing.

“He pretty much sold the dream to me,” the attacker says of the City manager. “They were the whole package.

“Obviously, I know quite a few players as well, but I think for me, it was about developing as a player, striving for trophies, to win things.

"But it was also the culture, the environment, and being surrounded by incredibly talented players at the same time.

“There were a lot of things that came into why I wanted to come here and obviously it’s a big move as well for my family.

“It was quite a lot to think about, but I think it was an easy decision at the same time.

“I was really pleased to have that all done before the World Cup and I hope it shows at the World Cup that I felt really relaxed.”

It certainly did. White’s exploits in France made her the all-time top scorer for England’s Lionesses at the tournament, while she also totted up the best return of any English player at a single international competition.

With so many goals scored, it’s no surprise she finds it tough to pick a favourite – “I like them all!” – with the former Arsenal forward written into history for not only her performances and goals, but the impact the team had at home too.

“I’m really proud obviously of what we achieved, how the country grasped a hold of the team and really got swept up by the wave and supported us,” she says.

“A phenomenal amount of people watched [the semi-final against the USA]. It was crazy how much media coverage [we had]; it was on the back of papers, everything.

“That was really amazing and that’s something we can be really proud of. We’ve kind of put women’s football in the spotlight and people seem to be really enjoying it and are really excited about it.”

White herself had felt those emotions before. She has always been a fan - growing up, she was World Cup crazy.

“I had pretty much most England shirts and my dad would take me and my brother to the pub to watch games.

“The atmosphere was always incredible, we used to have a lot of friends who would go, too – my dad’s friends and their children.

“It used to be amazing. It was on the big screen and it used to be really fun to go and watch.”

While she fondly remembers Michael Owen’s goal against Argentina at the 1998 World Cup in France – “He was so good, wasn’t he?” – she says her abiding memories of the tournament go beyond individual moments of excellence.

“To be honest, it's not necessarily what happens on the pitch, but the atmosphere watching, the anticipation of a goal coming or wanting the team to do so well,” she explains.

“Just having flags everywhere around the country, I think that’s more what I remember, how captivated the country got at the same time.

“[For the 2002 World Cup], I was in secondary school and because it was in Japan, there was the time difference, so we used to get up really early and the school would open in the sports hall and put the matches on a big projector.

“I think we got to have bacon sandwiches after the game. There used to be loads of us that used to go – I have real vivid memories of watching the tournament.”

Her memories about the Women’s World Cup are much different, though, as she didn't experience quite the same level of engagement on a national level.

“I watched a lot of the 2007 Women’s World Cup and I really enjoyed watching that one and I felt really invested because you want England to do well,” she recalls.

“I think that was the one where it was a little bit more on TV as well. But that’s the one that I can really remember. It’s a shame really that it wasn’t more publicised.”

That is changing now, of course. With back-to-back World Cup semi-finals, and the semi-finals of the Euros reached in between, the fanbase for England’s Lionesses is growing at some pace.

But, while White reflects positively on that, she can’t help but feel like the team could have done more after reaching the last four yet again this summer.

“I feel disappointed,” she explains. “We had so much genuine belief that we would win the World Cup.

“It was horrendous. You can probably see by my interview that I did at the end of the game where I was just blubbering, it meant everything to us to go all the way."

The striker looked to have brought England level when they trailed 2-1 to the United States in an epic semi-final, only for VAR to rule it out for the slightest of offsides.

“That’s elite sport," she sighs. "That’s what essentially takes you from second to first. It’s just those minimal tiny percentages and we just couldn’t quite get it on the day.

“I said to mum and dad, 'You should have given me a five and a half-size shoe! It would’ve been a goal!”

A seventh goal of the tournament, a potential Golden Boot-clinching goal, wasn’t to be, and her 'glasses' celebration – which was inspired by Cologne striker Modeste – was stopped in its tracks.

But, with White back to full fitness now, and already off the mark for Man City with just three appearances on the board, we’re sure to see it again plenty of times this season.

“I think he’s alright with me taking his celebration - he’s got the rights to it, I think!”

However, as far as most football fans in England are concerned, White has made it her own.