Invincible no more! Liverpool's unbeaten run comes to an end in spectacular fashion at Watford 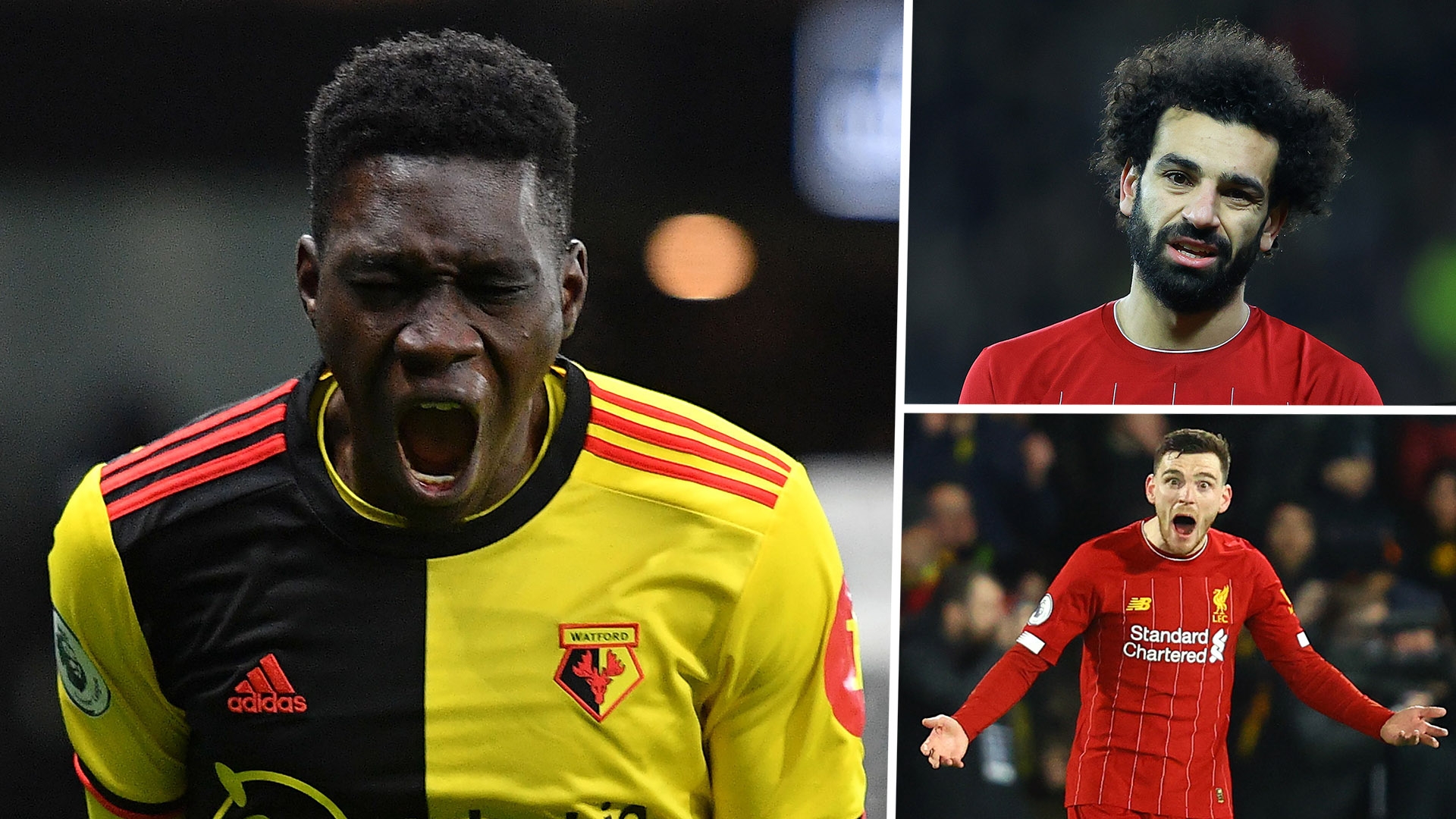 Well, it had to happen sooner or later.

But who would have thought it would do so in quite such spectacular fashion?

After 422 days and 45 matches, Liverpool have lost a game of Premier League football. Stop the press, and do not adjust your television sets. It really did happen.

They’ll win the title, of course, but there will be no unbeaten league campaign for Jurgen Klopp’s side after they were thrashed 3-0 by relegation-threatened Watford on Saturday evening.

The Reds had arrived at Vicarage Road looking to set a new top-flight record, seeking their 19th-straight victory – one which would move them to within nine points of that elusive 19th league crown.

Instead, they saw their cloak of invincibility removed. Not just removed but flung into the Hertfordshire sky, trampled into the mud for the whole world to see.

It had to be seen to be believed. Not since November 2015 had a team starting the day top of the Premier League suffered such a big defeat. Liverpool inflicted that one, 4-1 against Manchester City, but they were on the receiving end this time.

Ismaila Sarr, with two goals in six second-half minutes, took the game away from Klopp’s side before Troy Deeney, Watford’s captain and talisman, added a third. Huge for Nigel Pearson’s side in their battle to avoid the drop. They were brilliant, and move out of the bottom three on goal difference.

Pearson, somehow, kept his cool, while Klopp looked like a man who couldn’t believe what was unfolding in front of him. Was this really his team, his “mentality giants”, the boys who could fall into a viper’s pit and come out wearing snakeskin shoes? Was this Liverpool, or their evil twins, controlled by Pep Guardiola, Gary Neville and Jordan Pickford?

The names were the same, but the performances were unrecognisable. They started poorly, carried on in dubious fashion and then caved in completely in the second half. Watford deserved their three points and their three goals. The margin of victory, indeed, may have been greater. Sarr should have had a hat-trick.

Nobody in red emerged with credit. Dejan Lovren, making his first league start since December in place of the 'rested' Joe Gomez, had a nightmare, but he was far from alone. Virgil van Dijk was rattled, Fabinho exposed. Mo Salah and Sadio Mane did nothing, Roberto Firmino did less. Trent Alexander-Arnold, who will be crowned Young Player of the Year and has legitimate claims for the main award, looked bewildered throughout. The England full-back gifted Watford their third goal, converted expertly by Deeney as Lovren, Van Dijk and Alisson Becker floundered.

Liverpool failed to score for the first time in 37 league games. They had one shot of note in the first half, and only one on target across the 90 minutes. They were abject, a shadow of the side we have praised so readily - and deservedly - all season long.

Klopp lost 3-0 on his first visit to Vicarage Road, but this performance was worse. And there was no Adam Bogdan or Martin Skrtel or Christian Benteke or Mamadou Sakho to pin this one on. A bad day at the office, and then some. "We were not good enough," said Klopp. He didn't need to add anything else.

There will be some who will say they saw it coming, that Liverpool’s sharpness has been lacking since the Premier League’s mid-season break. They’d struggled against Norwich, lost away at Atletico Madrid and had to fight their way past West Ham.

True. But 3-0? Away at Watford? If you predicted that, go and collect your winnings from the betting shop. You’ll have got odds of 100/1, pre-game.

Of course the damage done is only superficial. Klopp and his players have always insisted that records and statistics do not matter, that trophies and medals are their sole motivation.

They’ll win the title in the next few weeks. We know that, and have done for some time. They continue their FA Cup campaign at Chelsea on Tuesday night, and their Champions League last-16 tie with Atletico is still very much in the balance heading into the second leg at Anfield.

But they got a lesson here. Even the best teams have to take their medicine sometimes. Even the greatest can fall.

It’s been a long time since Liverpool felt like this. Battered, bruised, embarrassed.