Neal Maupay's needless challenge led to the Gunners No.1 being stretchered off and the forward then went on to score the winning goal for Brighton

Another game, another horrible injury, another horrendous Arsenal defeat – one that surely ends any chances of Champions League football next season.

In the space of three days, Mikel Arteta has lost three players to serious injuries: losing Granit Xhaka, Pablo Mari and now, Bernd Leno, who was stretchered off in Saturday's devastating 2-1 loss at Brighton.

The German goalkeeper, arguably Arsenal’s player of the season, twisted his knee in horrific style after being needlessly shoved by Brighton striker Neal Maupay as he came to claim a loose ball on the edge of the box.

Arsenal will hope the injury is not as bad as it seemed, but the scream let out by Leno when his knee buckled as he landed suggested it might be some time before the 28-year-old is back playing again.

In the space of 18 months, the north London club have lost Rob Holding, Hector Bellerin and Calum Chambers to ruptured cruciate ligament injuries, it would be no surprise if Leno’s name is added to that list within the next 48 hours.

When Nicolas Pepe bent in a wonderful goal to give the Gunners the lead midway through the second half, it at least looked they would make the trip to St Mary’s on the back of a much-needed win.

However, some typically slack defending gifted Lewis Dunk an equaliser soon after and Maupay, to rub further salt in Arsenal's wounds, then won it for Brighton five minutes into stoppage time to complete another miserable Premier League away day for Arteta's men.

They have won just twice on the road this season and this latest setback surely ends any talk about sneaking a fifth-placed finish and a possible Champions League spot, with second-placed Manchester City facing a European ban.

They now sit six points off Manchester United in fifth with just eight games remaining and could end the weekend as low as 11th in the table. 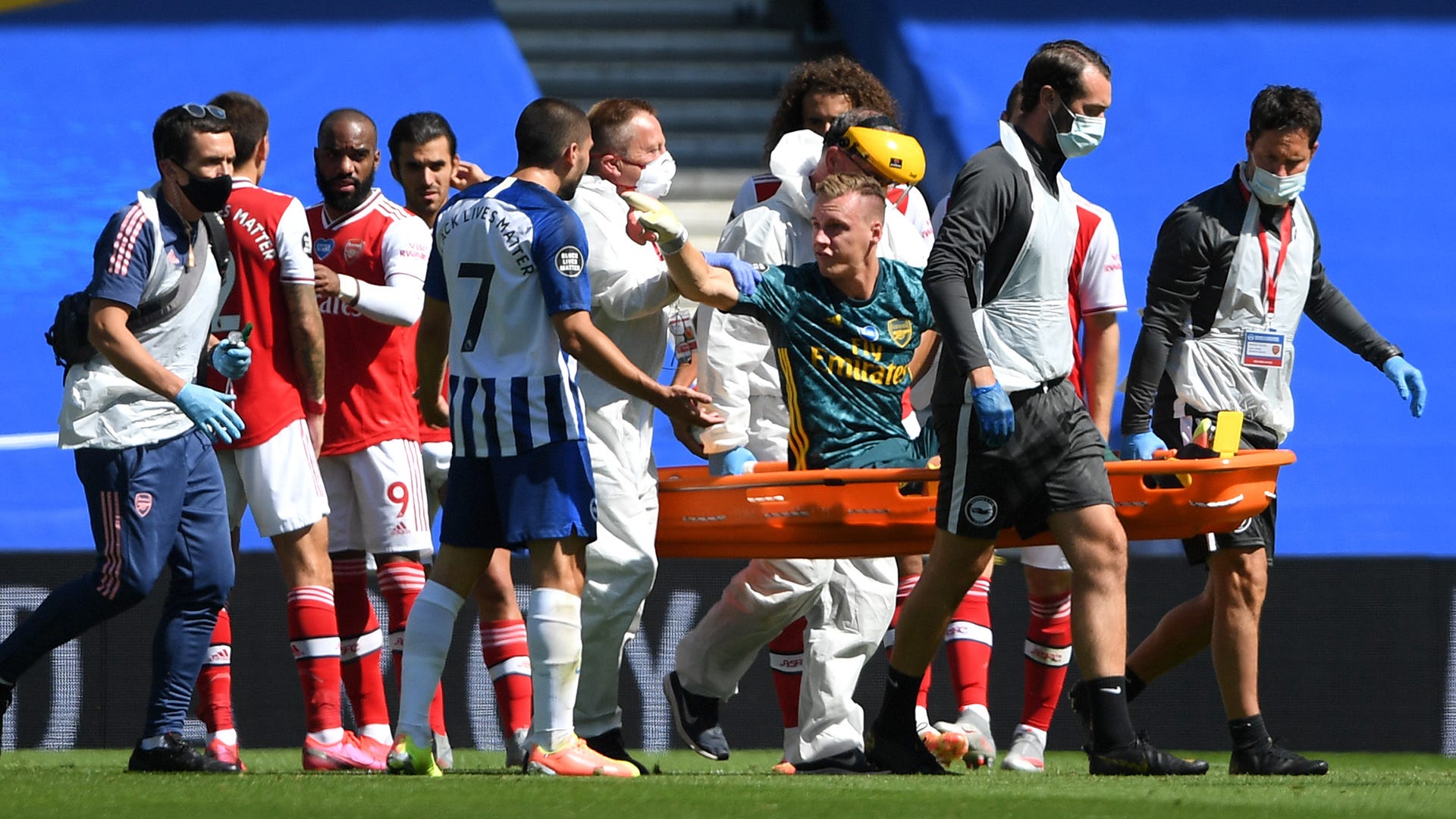 The frustrating thing is that this was actually a much-improved performance by Arsenal after their abject showing against Manchester City in midweek.

Arteta brought Pepe and Alexandre Lacazette back into the starting XI to partner Pierre-Emerick Aubameyang in attack, with Bukayo Saka, Dani Ceballos and Matteo Guendouzi making up the midfield.

The rejigged visitors combined well going forward in the first half, with Saka hitting the bar and Lacazette twice going close to scoring his first away goal in the Premier League since February last year.

Brighton settled into the game as the half wore on, however, and the opening 45 minutes ended with Leno being forced off after his clash with Maupay.

There was absolutely no need for the forward to jump for a ball that Leno was always going to claim, so it was no surprise to see the German furiously shouting at Maupay as he passed him on the stretcher.

Arsenal responded well to the injury after the interval and Pepe looked to have given the visitors maximum points when he curled the ball into the top corner with 22 minutes remaining.

But Dunk forced home the equaliser soon after and then, after Aubameyang had twice been denied by Ryan, Maupay found some space in the box and lifted the ball over Emiliano Martinez to snatch all three points for the hosts.

The game ended with several Arsenal players getting in the face of Maupay, with the visitors clearly still aggrieved at what had happened to their goalkeeper.

Guendouzi had to be dragged off the pitch as tempers flared and Maupay only added insult to injury afterwards by telling BT Sport: "Arsenal players maybe need to learn humility sometimes. They were talking a lot. They got what they deserved.".

That stinging rebuke merely made for the worst possible ending to Arsenal's painful first week back in Premier League action.