Antoine Griezmann did not see much of the ball against Napoli on Tuesday night. Indeed, the Barcelona forward touched it just six times in the first half.

However, he applied the finishing touch to the one moment of quality the visitors produced at the San Paolo to earn his side a 1-1 draw that makes them favourites to progress to the quarter-finals of the Champions League.

Still, a good goal could not gloss over a bad performance.

In truth, after falling behind to Dries Mertens' fine first-half finish, the Catalans never looked like levelling against the sixth-best side in Serie A until Sergio Busquets opened up Napoli's defence for the first time, playing in Nelson Semedo, who crossed for Griezmann to score from what was Barca's only shot on target all night.

It was an utterly uninspired performance from the Spanish title holders, whose dream of lifting the Champions League for the first time since 2015 still looks a long shot.

“We will not win it as we are,” said Lionel Messi last week. The Barcelona captain was proven right in Naples. His team are far below the level required to lift the European Cup.

Ahead of Messi's first appearance at the home of fellow Argentine legend Diego Maradona, he was offered pizza and mozzarella cheese through the window of Barcelona’s team bus by welcoming Napoli fans.

However, the home side's players were not in anything like as generous a mood.

Napoli nullified the No.10 by playing a low-block defence and bringing the midfield and forwards deep inside their own half too when not in possession. The hosts spent an hour of the game with 11 men inside their own territory.

And why not? Barca were bereft of incision and Napoli had a goal to protect thanks to Mertens, who struck right on the half-hour mark.

Maybe the midfield could have cut out the ball forward, maybe Junior Firpo should have been stronger as he was challenged by Piotr Zielinski, maybe Gerard Pique or Semedo could have closed down the threat on the edge of the box, but it was a hell of a strike from the Belgian forward, who left Marc-Andre ter Stegen frozen to the spot with a sublime right-footed finish from the edge of the area.

It was Mertens’ 121st goal, making him the joint-top scorer in Napoli's history, alongside Marek Hamsik, and what a way to do it!

Napoli later lost Mertens to injury, after the converted winger was on the receiving end of a reckless high boot from Busquets, whose resultant yellow card means that he will miss the second leg at Camp Nou. 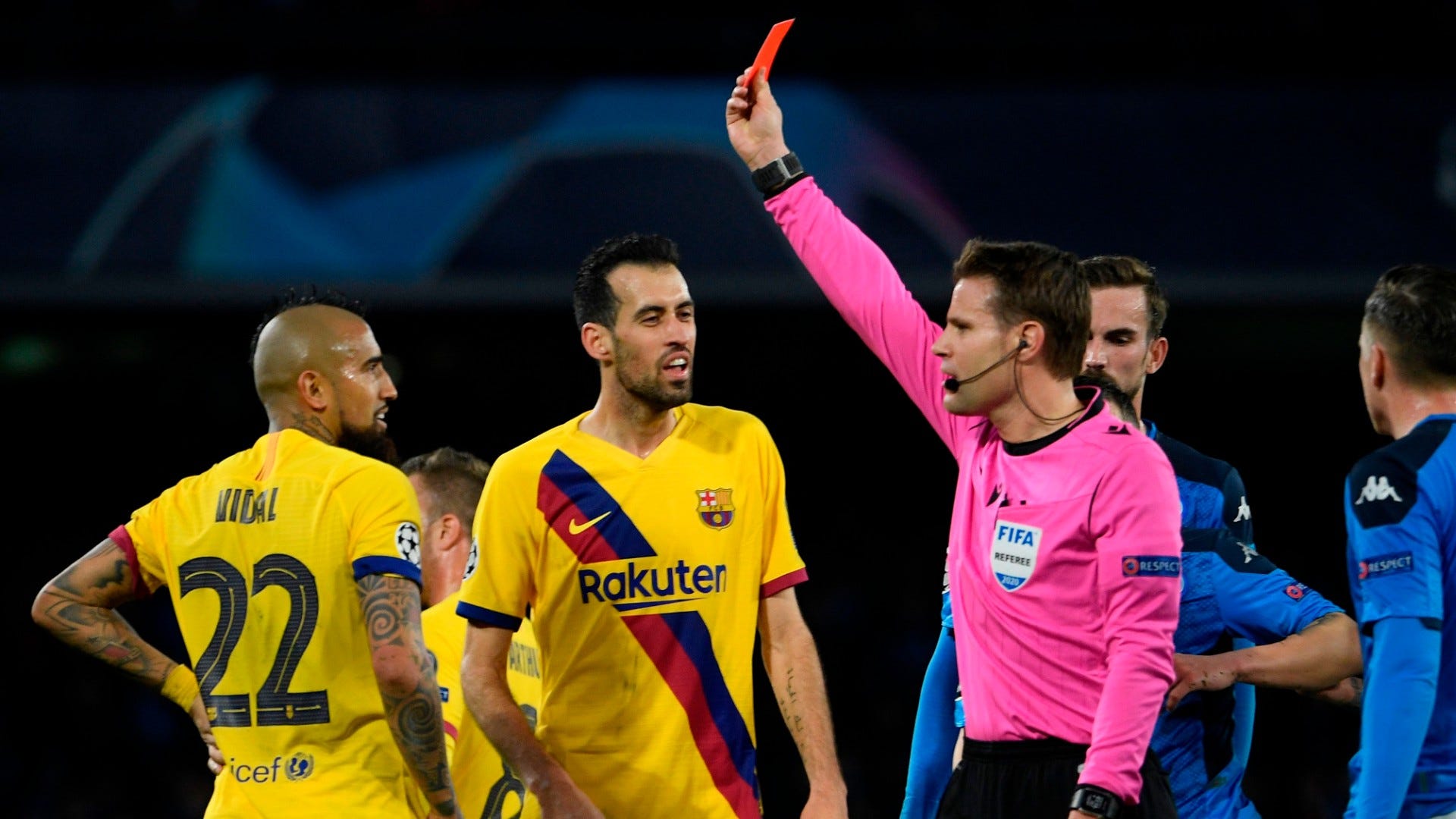 Arturo Vidal will also be unavailable through suspension after nonsensically getting himself sent off. After fouling Mario Rui wide on the left touchline, the Chilean then butted heads with the defender, prompting referee Felix Brych to issue the midfielder with two yellow cards at once.

Barca could have done without such stupidity, given they are already without injured trio Luis Suarez, Ousmane Dembele and Sergi Roberto, while Pique went down with a worrying ankle injury shortly before full-time at San Paolo.

In that context, a score draw is a decent result for Barca, particularly when one considers that Ter Stegen came off his line late on to brilliantly deny Jose Callejon what should have been the winner.

As it stands, though, Quique Setien's side remain favourites to reach the last eight thanks to Griezmann's goal.

But on the evidence of what we saw in Naples, Barcelona are unlikely to go any further.