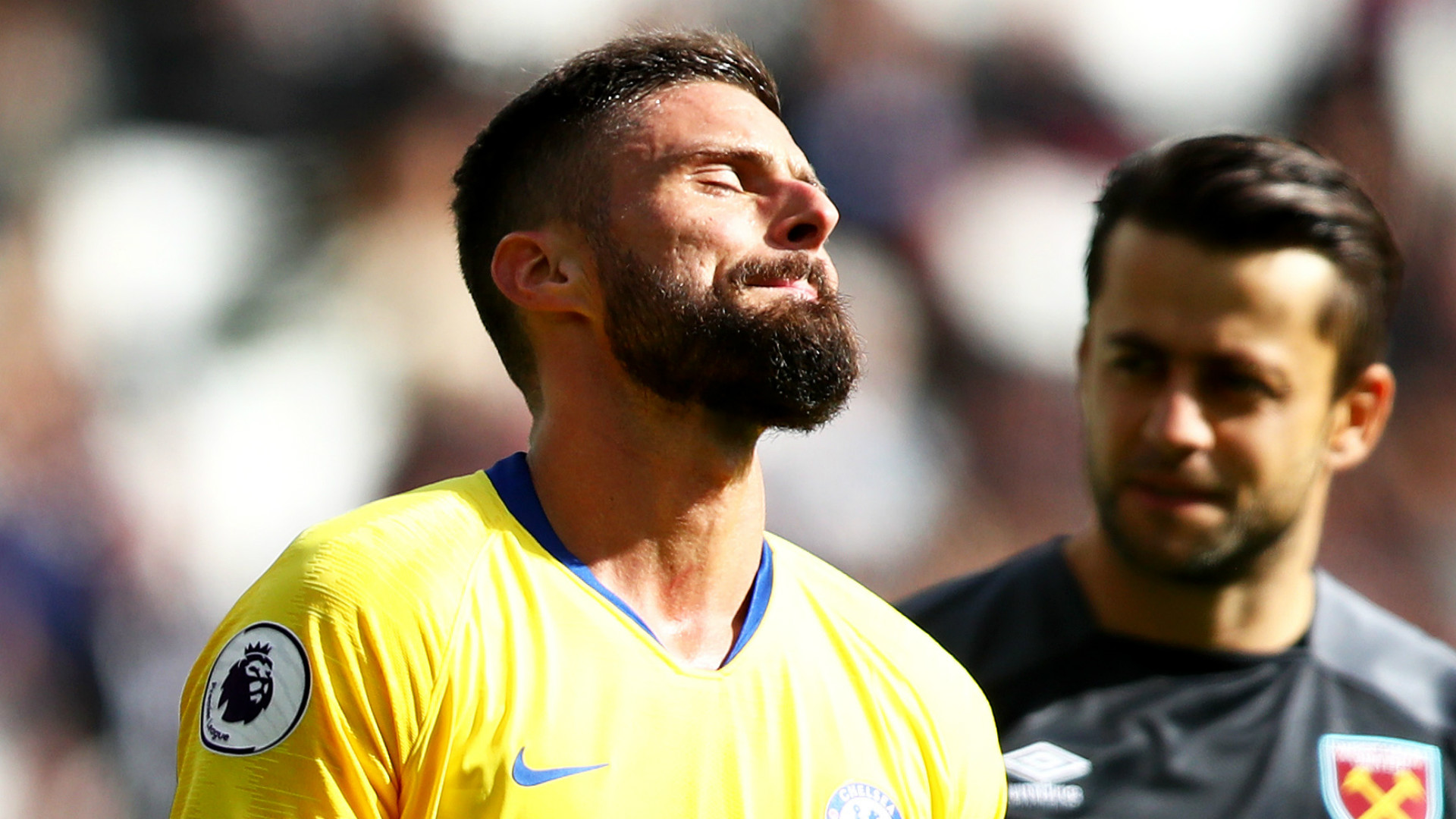 Olivier Giroud believes that Chelsea need to become more versatile in their approach if they are to have a successful season after being held to a scoreless draw by West Ham.

Maurizio Sarri's side were dominant in possession on Sunday but did not create many clear-cut chances as Manuel Pellegrini found a way to limit the Hammers' local rivals.

Giroud started in a front three with Eden Hazard and Willian, and noticed that his opponents spotted ways to stop their style of play.

Ahead of a meeting with Liverpool next weekend, he thinks that Chelsea will have to become more flexible as teams work out solutions to Sarri's tactics.

"I always want to take this frustration to transform it into a positive thing for the next game," Giroud said at the London Stadium. "Now, we are going to look at what went wrong in this game. Even though we didn’t do so well, we could have won the game at the end of it.

"It’s disappointing and we lost two points - West Ham were happy with this draw. We have a big game at the weekend and we want to show our strength, our character. I’m not saying it’s a tactical problem. Sometimes as players we have to recognise the best way to put them in difficulties.

"Sometimes we rushed our game and have not been patient, or maybe we did not put enough pace in our game. Now, our opponents are starting to know Chelsea well so we need to bring something else. Maybe we need to give a bit more on the pitch as well.

"It’s a tough time, but this is when you see the men and we have to show stronger character and response in the next game. As a team, we didn’t succeed in finding the solution. We tried too much to play centrally and against a strong defence like that, a lot of players, it was very hard to combine, especially in the last 30 yards.

"Maybe we should have gone a bit more down the wings and put in more crosses into the box. It was a bit disappointing, we are aware of that and we will work on it. We want to bounce back as soon as possible."

The World Cup winner refused to use fatigue following a delayed trip back from Greece, where they beat PAOK 1-0 in the Europa League on Thursday, as an excuse for the draw.

"We had a long trip and it was tiring because we had to stay there," he said. "When we came back we had to train straight away. It’s not the best.

"We are not hiding behind the fact we play two games in a week. We have to do more and we are aware about that."

Giroud has yet to score this season and cut a frustrated figure on the pitch as the front three failed to combine to create many chances against West Ham's deep-lying defensive unit.

The 31-year-old is competing with Alvaro Morata for a starting spot but refuses to believe that he has become the club's No.1 striker.

"I don’t like to say that I’m ahead of another player, that I’m in first position," he continued. "I have a fair competition with Alvaro, I played well in the last Premier League game but I wasn't at my best against West Ham. That’s why I was a bit frustrated and disappointed to be substituted, but the coach made his choice and you have to respect it.

"I will transform my frustration in a good way in the next game. Alvaro and myself have to score goals for the team so we need to find the net to help the team reach our targets."

As well as a league meeting with Liverpool next weekend, the Blues will face the Anfield club away from home in the League Cup. Jurgen Klopp's side are the last team with a perfect record after matchday six and Giroud admits that it will be a challenge to balance the squad across the two fixtures.

"We want to win every single game," Giroud affirmed. "The coach will obviously make some changes, but we have many players with quality and we have a good team. We want to be strong and show them that it won’t be easy for them at Anfield.

"Maybe they will make changes too. We want to keep the confidence high and come back to London with good momentum and start again a winning run. It would be the best preparation for the Premier League game to win.

"We need to show character after the West Ham game. But there is nothing better than to play the team at the top of the league. It will be a good game, a good test."