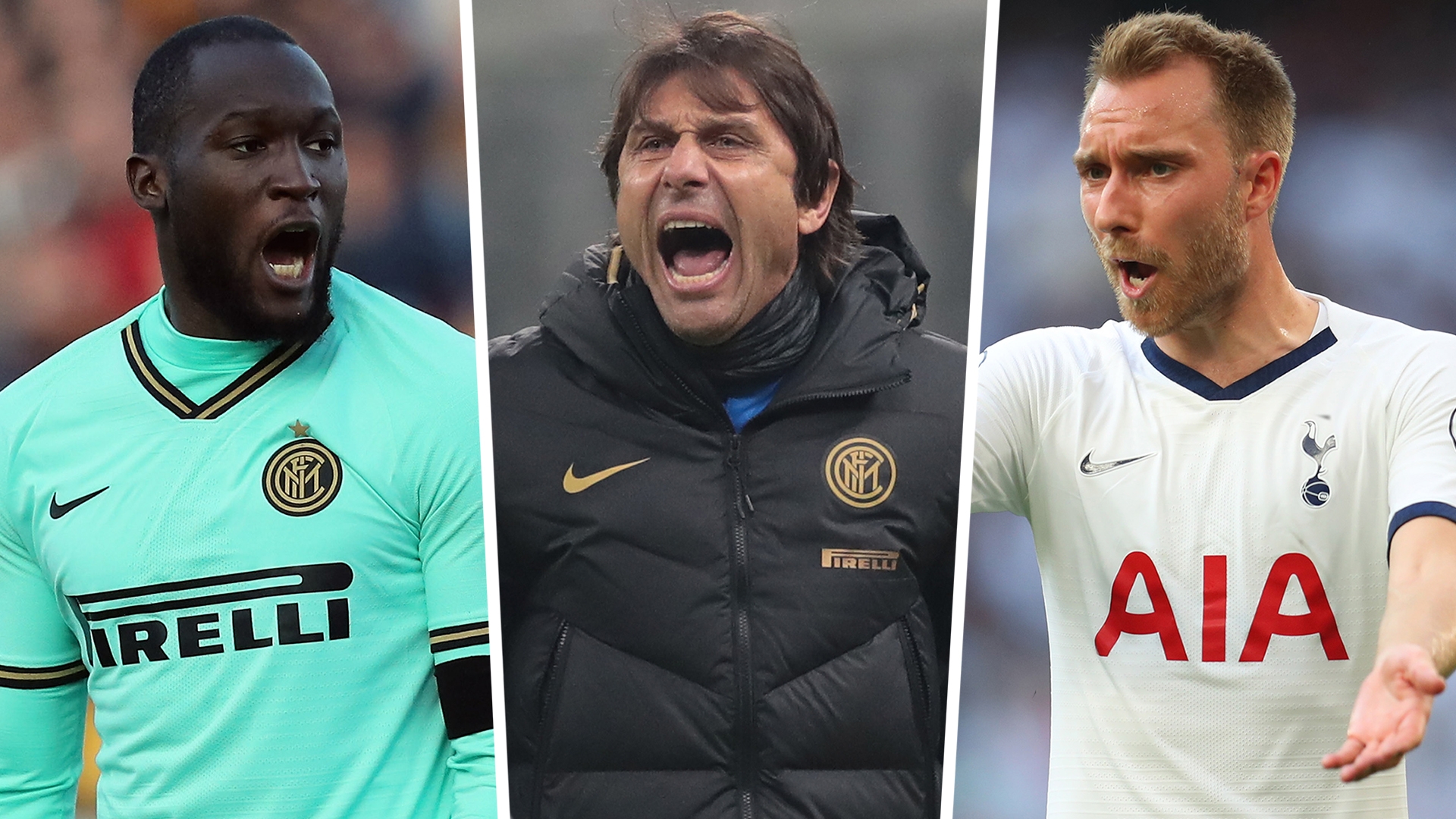 Since arriving at San Siro last summer, the Nerazzurri coach has already signed five players from English clubs with more possibly on the way

Antonio Conte is intense. Too intense for some.

This is a coach who is so obsessed with his players being in peak physical condition that he even offers them sex tips.

"Short spells, with the minimum of effort and use positions where they are under their partners,” the Inter boss told L'Equipe.

"And preferably with their wives, because then you don't have to put in an exceptional performance!"

Conte is only concerned with his own satisfaction – and when he feels he doesn't have a squad capable of carrying out the hyper-intense, meticulously organised, mainly transitional style of football he craves, he lashes out at his bosses.

Even by Conte's standards, though, his outburst after November's 3-2 loss to Borussia Dortmund was extraordinary, and not just because it arrived less than six months into his San Siro tenure.

“Big mistakes were made in planning this season," Conte told Sky Sport Italia immediately after the Champions League clash. “I don’t care about January or February. We should’ve planned this season out much, much better.

“We proved that we can trouble anyone if we are on form, but there are players who have played non-stop. We cannot play in Serie A and the Champions League constantly pushed to the limits.

“I am really p*ssed off, because we cannot do more than this. I am just fed up saying the same thing over and over. I hope a director comes out and says something instead."

If Conte's attack on his employers appeared unwarranted, given Inter had spent €155 million (£131m/$172m) strengthening his squad during the summer, his frustration was at least understandable.

On that night at Signal Iduna Park, the Nerazzurri had given an exhilarating glimpse of what they could become under Conte.

For 45 minutes against one of Europe's most exciting sides, Inter were electric, relentless. They ran Dortmund ragged and fully deserved their 2-0 half-time lead.

Then, suddenly, shockingly, they ran out of steam and Dortmund took full advantage, turning the game on its head to leave Conte incandescent with rage.

He felt he simply didn't have sufficient strength in depth to rotate his players regularly in order to keep them fresh enough to implement his mentally and physically draining tactics in two competitions.

"The draw stems from the fact that we must always go at 200 [kilometres] an hour," Conte explained after the recent Serie A draw with Lecce. "We are not a team that manages to bring home the victory going at an average speed. When we can't get to the maximum, we are a normal team."

Which is precisely why Conte has been so desperate to add new players during the January transfer window, with Inter three points behind Serie A leaders Juventus having drawn five of their past seven games.

And he doesn’t want just any players, either. Conte wants Premier League players.

The Nerazzurri returned to Old Trafford this month to do a €1.5m deal for Ashley Young, while Victor Moses has joined on loan from Chelsea and could be followed to the Giuseppe Meazza by Olivier Giroud, though, at this point, Inter seem unwilling to meet the Frenchman's valuation.

Most excitingly of all, though, Inter have signed Christian Eriksen for a knockdown fee of €20m (£17m/$22m), as the attacking midfielder's contract at Tottenham was set to expire in the summer.

Obviously, we're talking about players of varying degrees of quality and maturity here but all of them either played under or against Conte's Chelsea.

During his two-year stint at Stamford Bridge, Conte transformed Moses into a marauding full-back who played a key role in the Blues' title triumph 2016-17 title triumph, while Giroud was acquired from Arsenal for £18m in January 2018.

Both have suffered dramatic dips since Conte's exit. Moses spent the last year on loan at Fenerbahce, while Giroud has fallen behind Tammy Abraham in the striking pecking order under Frank Lampard. The 34-year-old Young, meanwhile, had been relegated to United's third-choice left-back before leaving Old Trafford.

Conte, though, has the utmost faith in his ability to revitalise players, and with good cause.

Sanchez, of course, has barely played for Inter due to injury but Lukaku has formed a devastating partnership with Lautaro Martinez and is one of the main reasons why the Nerazzurri are challenging eight-time defending champions Juventus for this season's Scudetto.

The Belgian has been effusive in his praise of Conte, describing the Italian as the ideal coach for him at this stage of his career.

Lukaku's team-mates have been similarly ebullient, with Alessandro Bastoni labelling Conte "The Messi of coaching" and Nicolo Barella claiming that is willing "to die" for his boss.

The latter may have been guilty of questionable hyperbole but there is no denying that Barella's declaration is indicative of the kind of commitment Conte asks of his players, or "foot soldiers" as he sometimes calls them.

He certainly will not tolerate anything less than maximum commitment. As Andrea Pirlo once wrote, a Conte dressing room is not for the faint of heart: "As we Italians say, he a devil for every hair. And if the hair is fake, the devil is very real!"

And the devil must be obeyed. Players are expected to be switched at all times and to leave everything out on the field.

As we have already seen in Dortmund and Lecce, Conte's Inter are not yet capable of doing that twice a week.

Hence the need for reinforcements, with Conte clearly feeling that he is best served by picking up players familiar with the frenetic pace of the Premier League rather than the slower Serie A.

Young is past his best but greeted the opportunity to move to Inter with the kind of enthusiasm that would only have convinced Conte of his worth. Perhaps more importantly, he boasts medals.

During that remarkable rant at Signal Iduna Park, an exasperated Conte asked, "We are talking about players who, apart from Diego Godin, have never won anything. Who do we turn to? Nicolo Barella who has come from Cagliari? Or (Stefano) Sensi, who came from Sassuolo?"

Conte, then, doesn't just want energy or cover; he also wants winners, players with experience of having performed at the very highest level. For him, that clearly means the Premier League.

Indeed, it is telling that even his search for greater creativity in midfield – arguably the biggest weakness in his impressive but flawed Inter side – he ended up returning to England for Eriksen.

The Dane's commitment to the Tottenham cause may have waned after his failure to secure a transfer last summer but he previously showed under Maurico Pochettino that he can press with the kind of intensity that Conte requires.

If Conte finds an adequate role for Eriksen in his preferred 3-5-2 formation – he could be deployed as a No.8, or as a No.10 in a hybrid system more akin to a 3-4-1-2 – the Dane could well prove the missing piece in the Premier League puzzle Conte is assembling at San Siro.

Of course, the former Italy boss has succeeded in Serie A before with a squad of similar attributes.

The Juventus side he led to three consecutive Scudetti was founded upon a rock-solid defence, driven by a dynamic midfield complemented by the guile of Andrea Pirlo and spearheaded by a front two boasting both physicality and tenacity.

Where Conte’s best Juve had Gigi Buffon behind the 'BBC' in the defence (Andrea Barzagli, Leonardo Bonucci and Giorgio Chiellini), his excellent Inter goalkeeper Sami Handanovic is protected by a backline of enormous potential in Milan Skriniar, Stefan de Vrij and Alessandro Bastoni.

In attack, Lukaku and Martinez look like they have an even better understanding than Carlos Tevez and Fernando Llorente, and while Inter’s midfield have not yet attained anything like the level of Claudio Marchisio, Paul Pogba, Arturo Vidal and Pirlo, Stefano Sensi and Barella are young, hungry Italians of enormous potential.

Of course, Conte’s Juve didn’t succeed in Europe – they lacked the nous, finesse and versatility required to do so; an allegation that could be made against his current Inter outfit – but he felt that was because of the club’s refusal to back him in the transfer market ("You can't expect to eat in a €100 restaurant with €10 in your pocket.").

It was the same story at Chelsea, when Conte argued that his side wouldn’t be able to defend their Premier League title without serious investment. He felt that their triumph was a freak achievement – and so it proved.

Conte knew fell-well where the danger was coming from. Manchester City, Liverpool and Tottenham occupied the top three spots for sprints made at the end of both of Conte’s season in the Premier League.

The methods of Pep Guardiola, Jurgen Klopp and Pochettino may have varied but all three managers played intensive games. The more players they had at their disposal, the easier it was to sustain, and more likely it was to end in silverware.

It is, therefore, no coincidence that both Guardiola and Klopp have enjoyed remarkable success in the interim having been backed to the hilt in the transfer market, whereas Pochettino is now out of a job after going without a single new player for 18 months of his tenure.

These were the two big lessons that Conte took out of his time in England: the value of playing with intensity; and the necessity of a deep pool of players in order to so.

So, while the identity of some of Inter’s most recent recruits are undoubtedly surprising, that they have come from the Premier League is anything but.

Conte knows these players and he knows they can cope with his style of play. In almost every case, he knows that their clubs were – or are – as desperate to get rid of them as they are to leave. Indeed, the Premier League is a happy hunting ground for cash-strapped Inter, given the top clubs are so flush with TV rights money that they have an excess of experienced players, some of whom are unhappy with their lack of game time.

Just like Lukaku, Alexis, Moses and Young, Eriksen is looking for a new challenge. He'll certainly get one at Inter, where he'll be expected to produce consistently exceptional performances. At least on the pitch...