The former England international fulfilled a lifelong dream when he joined the Reds from Southampton, but only spent one season with his boyhood club

Rickie Lambert has opened up about his ill-fated spell at Liverpool, and revealed how Mario Balotelli drove him to distraction with his training ground antics at Anfield.

Lambert, a lifelong Red, spent a season with Liverpool after completing a dream – and surprise – switch from Southampton in the summer of 2014.

The striker, who scored close to 250 goals during a remarkable 18-year career, would make 36 appearances for his boyhood club, netting three times. He would also captain the Reds in a League Cup win over Middlesbrough at Anfield.

But having failed to hold down a regular place - he made just a dozen starts in all competitions - he left for West Brom in July 2015. He retired from playing after a spell at Cardiff in 2017.

What was Lambert's biggest regret?

Speaking to the Straight From the Off podcast, Kirkby-born Lambert spoke of his joy at being told that Liverpool, who had released him as a 15-year-old, had come in for him 17 years later, but also revealed the biggest mistake he made after he returned.

He said: “I was in Southampton and my agent rang me and said ‘are you sitting down?’ I was in bed, so I sat up and he said ‘Liverpool are in for you’. I just said ‘f*ck off!’ but he said it was serious. I was like ‘oh my word!’

“I couldn’t tell anyone. My mates still haven’t forgiven me! The rumours were getting out, and they were asking if it was right. They obviously couldn’t believe it. It was crazy. It was a dream.”

Lambert added: “My first pre-season, this is one of the biggest mistakes I ever made. [Brendan] Rodgers gave me, Stevie [Gerrard] and the lads at England, I think it was five weeks off, so we would come back a lot later than everyone else. But I went on holiday with the missus and kids, and then I went back, because I wanted to be in the best shape possible playing for Liverpool.

“So I literally had two weeks off and then came back with the first group at Liverpool. And that was a massive mistake. Pretty early on I was thinking ‘f*cking hell’. I could feel it in my legs. I needed the break. It was a stupid mistake.

“I was 32 as well. The year before at Southampton I could start to feel a slight difference, my little yard of pace. Then at Liverpool I just felt leggy, I just didn’t have the energy and the attitude that I was in.

“But I was still raring to go, couldn’t wait for the season to start and thought I was going to hit the ground running, score, do what I’d always done and be a success.” 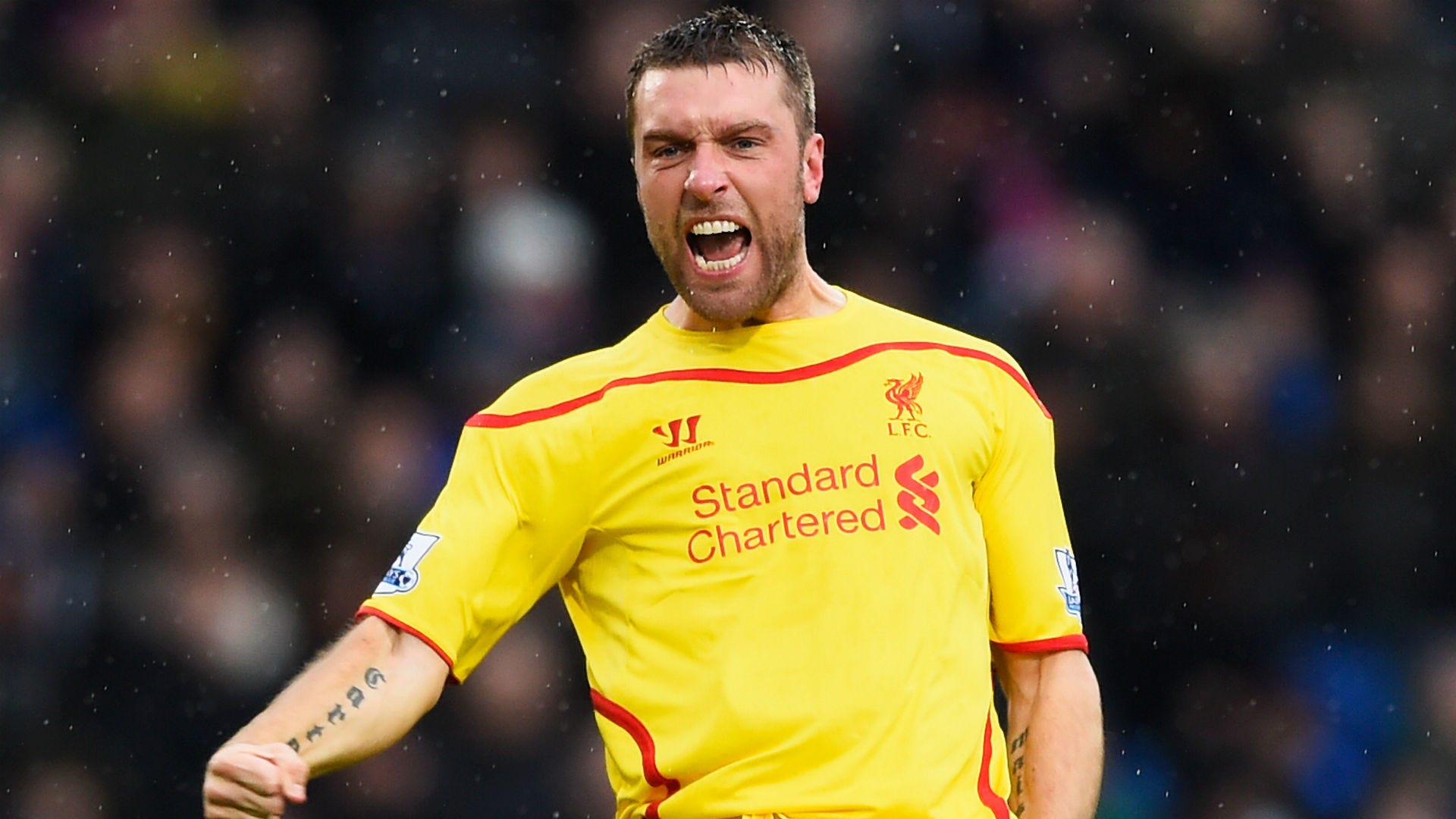 Lambert is often, and wrongly, cast as the player signed to replace Luis Suarez at Liverpool.

The truth, however, is that Brendan Rodgers had intended to bring in Alexis Sanchez alongside Lambert, only for the Chile star to choose a move to Arsenal instead.

Eventually, after an increasingly desperate summer search, Rodgers gambled on Balotelli, who arrived from AC Milan in a £16 million ($22m) deal.

“He was a good lad, childish but infectious,” Lambert said of the Italian. “But as soon as he stepped on the training pitch he became a different person.

“I’ve never seen anything like it, to be honest. I was at the pinnacle of my time as a professional, so to come across him was just…

“At first, he gave everything when he played. But in training, I could tell he wasn’t giving his all. He was answering Brendan back and my head went with that.

“The fact that he was playing in front of me didn’t bother me at first, I thought ‘I’ll get myself in’ but just seeing the way he was in training, and then he was playing, it did affect me a little bit.

“My head went with him in training and I had to go in and say to Brendan ‘don’t put me on his team again’. I think Stevie had said the same.

“His head would just go. If it wasn’t going his way, he would just ruin the session basically. He’d kick the ball away, score an own goal.

“I was speaking to Joe Hart and the lads at England and they were like ‘he was like that at City’. I’d ask them ‘how did he get away with it?’. They just shook their heads.” 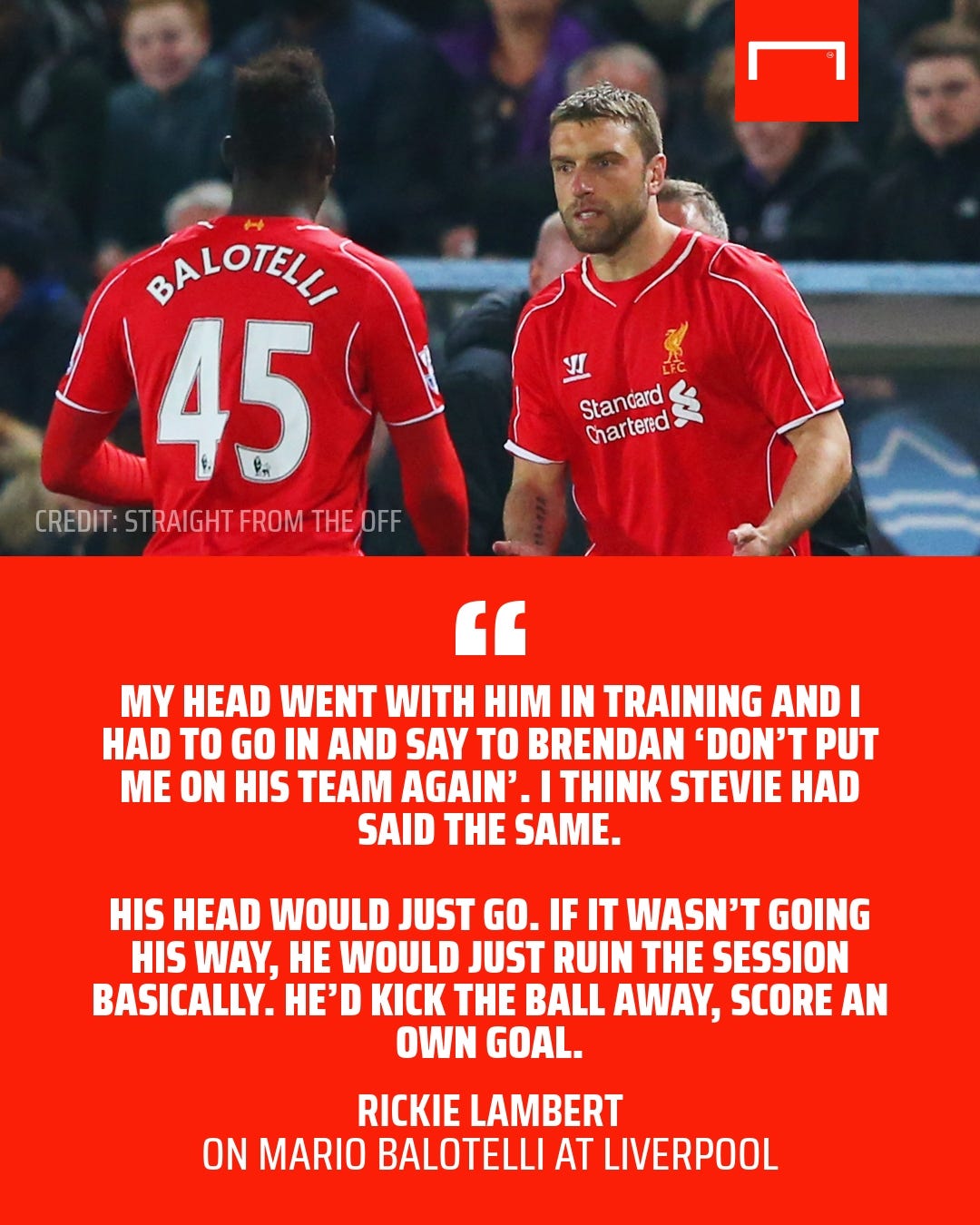 It took Lambert 12 games to open his Reds account, though his goal at Crystal Palace came in only his third league start.

But he remembers the day he knew things were not going to work out for him at Liverpool vividly.

“We played Basel at home, and I was terrible,” he said. “I couldn’t really feel my legs, I didn’t have the little burst I’d had my whole career. We were 1-0 down at half-time, we needed a goal and he brought me off.

“I kind of knew ‘I’ve f*cked this up here’. I deserved to get brought off, and I was gutted.”

He added: “Shortly after, Brendan pulled me and said ‘[Alan] Pardew has come in for you’. He was the Crystal Palace manager at the time. This was December, and he said ‘I think you should go in January, because I can’t promise you any game time here’.

“I didn’t really think about it. I said ‘I’ve left Southampton to join Liverpool, and you want me to join Crystal Palace after five months?! Why would I do that?’

“I basically told him no, and I didn’t play then. He changed the system, played Sterling up top and I literally didn’t touch the ball for about three-and-a-half months. That was a really tough time. Aston Villa came in at the end of January and I was very close to joining, but I always thought ‘I’ll turn this round’. But with not playing, my fitness was getting worse and worse, and I couldn’t affect anything.