Los Blancos signed the Brazilian from Flamengo in 2020 for €30 million, but a loan move to Signal Iduna Park is not going according to plan

When Reinier Jesus arrived at Borussia Dortmund, then-coach Lucien Favre hailed the loan signing: "He’s a nine-and-a-half who can play as a false nine."

However, in the past 15 months, Reinier has mostly been a zero in the Bundesliga.

He has played 26 games in black and yellow, but only has one goal to his name and has started just two games in all competitions.

Dortmund had been in the running to sign Reinier from Flamengo after the Brazil youth international impressed in Brazil's Serie A with six goals in 14 appearances.

As he would unlikely to break through immediately in Madrid, a loan move to the German side seemed like a logical step to gain experience in one of Europe's top leagues, especially as Dortmund are known for giving youth a chance.

Those chances so far have been very limited, with his first start coming on the last day of the season in 2020-21 with Dortmund already having secured a top-four spot in the Bundesliga under caretaker manager Edin Terzic.

Reinier is on his third manager already at Signal Iduna Park, with current boss Marco Rose handing the 19-year-old a start against second-tier side Ingolstadt in the DFB-Pokal.

Dortmund progressed to the next round of the German Cup thanks to two goals from substitute Thorgan Hazard, with Reinier lasting for the full 90 minutes for the first time at the club.

His performance failed to earn rave reviews as he was often guilty of overplaying the ball. The following game, he returned to the bench, not to feature in the league against Koln.

Rose was without talismanic forward Erling Haaland for the game with Koln, but despite Reinier's false nine credentials, decided to start Hazard and Marco Reus in attack, with Steffen Tigges coming off the bench.

Forward Tigges netted his first Bundesliga goal in the cameo, having previously only scored in Germany's third tier for Dortmund's reserve side and former employers Ingolstadt.

After the game, Rose praised the 23-year-old and said he was the club's best replacement for Haaland, leaving Reinier in the dark about his future once more.

The Brazilian's father Mauro Brasilia believes that Dortmund are not using Reinier correctly, feeling that they should utilise the teenager to dominate possession, claiming something "very strange" is happening at the club.

"He could contribute to the team with his different style of play, which is very necessary in some games," Brasilia told Goal. "He knows the idea of ball possession, control of the game, like few others. It seems that Dortmund have not understood it, they have not realised this good option. 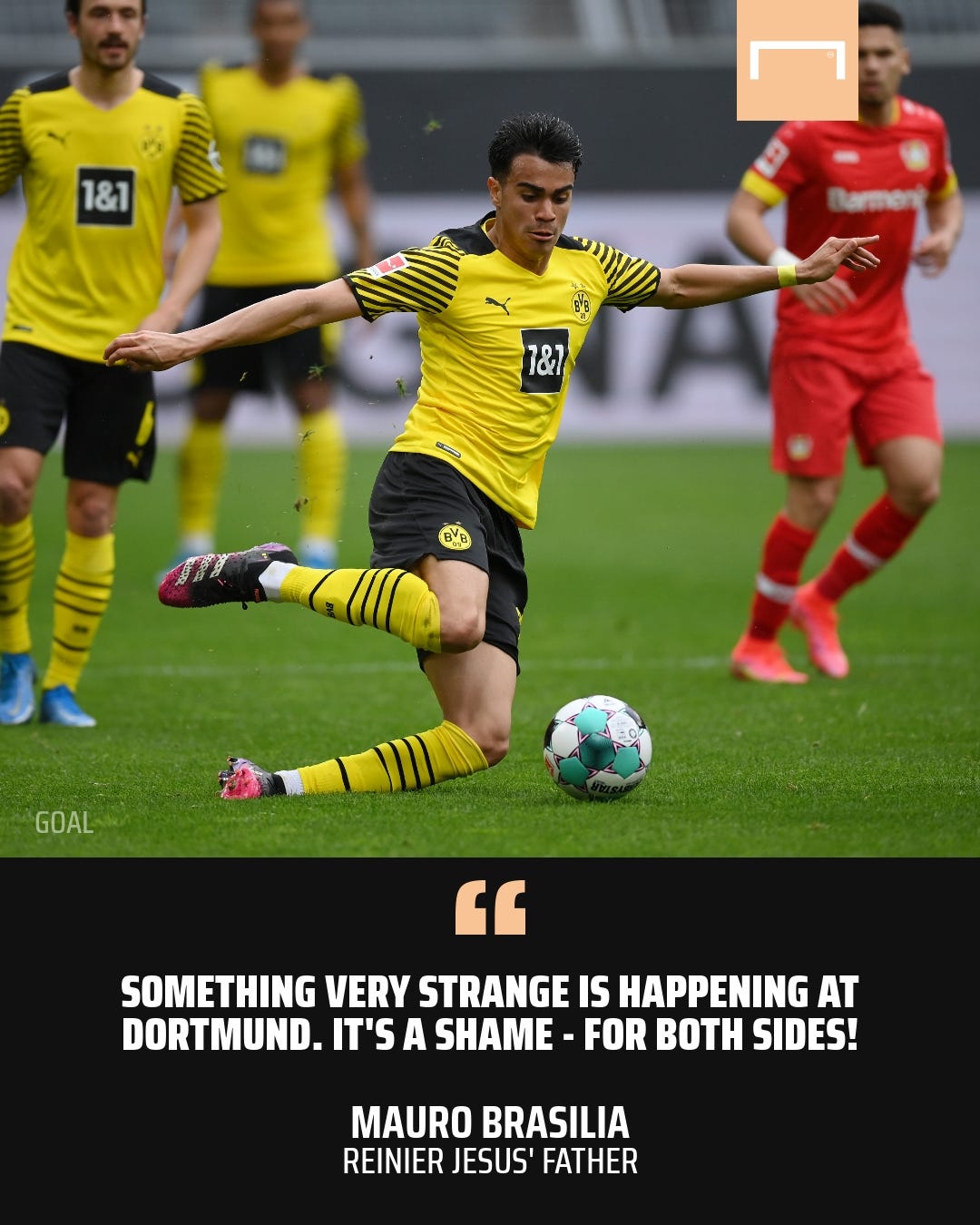 "Despite this small delay at the beginning of his professional career in Europe, Reinier continues being a prestigious name in other big clubs, and Borussia lose each day the opportunity of developing and enjoying another talented young player.

"Something very strange is happening there. It's a shame – for both sides!"

Dortmund had the opportunity to cut short the loan in January 2021, but decided to keep Reinier to see if he could break through under a new coach.

However, with that prospect looking just as unlikely now, he may be set to leave in January 2022.

Benfica have been tipped as a possible loan destination for the attacker, with Madrid eager to see him develop at a new club.

Dortmund are likely to sanction an early exit with sporting director Michael Zorc and his successor Sebastian Kehl set to green light the termination of the loan deal.

Benfica looks the ideal location for Reinier to get his career back on track. The Portuguese side are coached by Jorge Jesus, the same man who brought him to Madrid's attention while managing him at Flamengo.

Until January, he is likely to continue to warm the bench at Signal Iduna Park.