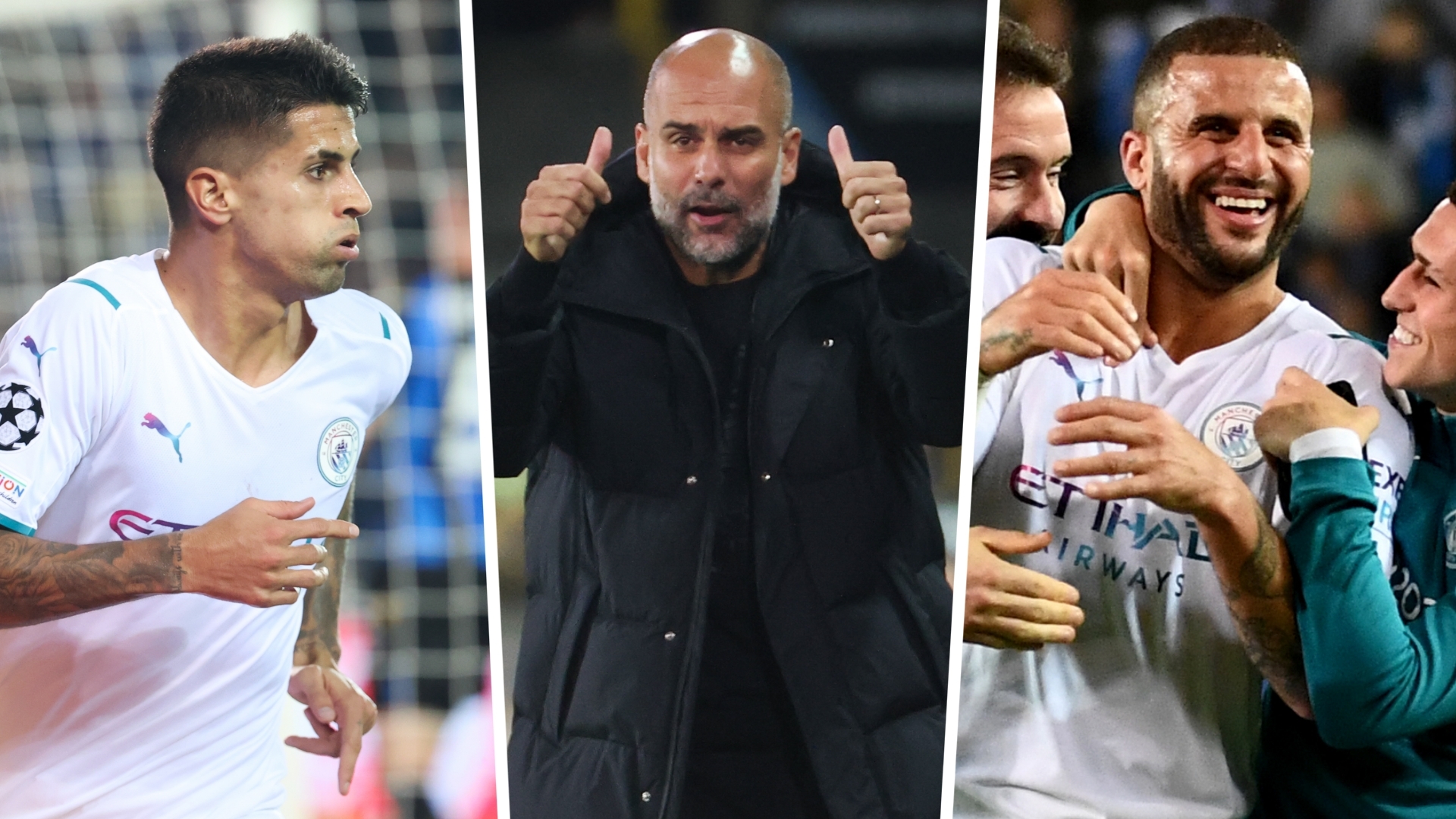 Having outplayed but drawn with Paris Saint-Germain before beating RB Leipzig in the opening rounds of the Champions League group stage, Club Brugge were meant to offer Manchester City a real test on Tuesday evening.

Instead, though, the Belgian champions were blown away by Pep Guardiola's side, who despite not playing a striker still managed to score five, and could have had a lot more.

It was a victory that owed as much to hard work and tactical awareness as superior quality last season's beaten finalists.

And that was no more evident than in the wide positions, where defenders Kyle Walker and Joao Cancelo offered an extra threat to City's dynamic front three.

City's full-backs were relentless, forcing Brugge's dangerous wide forwards Noah Lang and Kamal Sowah to drop deep into their own half to help out in defence, but even with that extra cover Walker and Cancelo were unstoppable.

Cancelo got the crucial breakthrough on the half-hour to reward City's early dominance, and Walker added the third early in the second half after Riyad Mahrez's penalty shortly before the break.

"[It was] one of the best performances we have done in Europe, definitely," Guardiola said post-match.

"I looked over Brugge in the international break. I looked at many games. I know how good they did against PSG."

That research - which included some wise words from ex-City captain and Anderlecht manager, Vincent Kompany - certainly paid dividends, as Guardiola's again deployed his striker-less system that has brought his side great success over the course of 2021.

The Catalan's use of full-backs was innovative last season, with Cancelo or Oleksandr Zinchenko used as inverted defenders, with the pair regularly step into midfield to try to create an overload in the middle of the pitch, as Cancelo even popped up in the No.10's position at times.

In Belgium, though, he and Walker were clearly told to be far more direct, making both overlapping and underlapping runs to stretch out a young Brugge side and drag their players into uncomfortable positions.

Guardiola's use of full-backs has been fascinating over the past season-and-a-half as he has tried to maximise his side's threat without a striker, and it was telling that both Cancelo and Walker were City's furthest players forward on the occasions they found the net.

Cancelo's opener was the perfect example of the intelligence and flexibility of his players in this formation.

Phil Foden lined-up City's 'false nine', but the England international was more than willing to drop back as far as to be in between centre-backs Ruben Dias and Aymeric Laporte, reprising the quarterback role he played for England during the recent international break.

It was from such a position that he picked out Cancelo's run with a perfect 40-yard pass over the top of the Brugge defence, with the ex-Juventus defender able to provide a poked finish.

A beautiful pass from Phil Foden is finished off by a striker's touch and finish from their Portuguese full-back 👌#UCL pic.twitter.com/tNFUhi123P

Cancelo has now scored twice in City's opening three Champions League matches - as many as he managed in his first 30 appearances in the competition.

City are keen to spread the goals around this season as Guardiola manoeuvres his side to cope without a number nine, and Walker's strike made him the 15th City player to score in 2021-22 from just 13 matches.

His goal was similar to Cancelo's in that he made the run into the penalty area from deep, though Kevin De Bruyne's through-ball into his path was far more straightforward than Foden's.

Cruise control for the visitors as Kyle Walker bursts forward to pick his spot.

A goal for both full-backs this evening! 🎯 pic.twitter.com/4ahGoudjzI

KYLE WALKER GETS IN ON THE ACTION.

CITY'S FULLBACKS ARE HAVING A DAY. 💫 pic.twitter.com/LkLCm0WLxn

With Ferran Torres - the only player at the club comfortable playing as an orthodox striker - potentially out for up to three months with a metatarsal injury, Foden could spend the majority of the coming weeks playing in that 'false nine' position.

His high-pressing, link-up play and ability to play on the half-turn makes him the best fit for the role, and he has the confidence and awareness to drop off at the right times.

Guardiola was delighted with how his masterplan worked, and made sure to signal his appreciation of Foden's role in Cancelo's opener in the seconds after the ball rolled through Simon Mignolet's legs.

"We found a lot of passes with Phil," Guardiola added. "We had runners in behind. We could have scored more goals, we had many chances. All of us are delighted with the performance we have done."

The only thing missing from Foden's performance was a goal, but he has shown already this season that he offers a threat in big matches.

So too have the full-backs, as Cancelo and Walker played key roles in quelling any threat of City failing to get out of the Champions League groups for the first time in eight years.