Despite their shared history at Borussia Dortmund, the American has struggled for game time under the German coach, sparking talk of a transfer

Christian Pulisic was on the scoresheet when Chelsea beat Leeds at Stamford Bridge three months ago.

When the two sides meet again at Elland Road on Saturday afternoon, the United States captain is likely to be on the bench.

Pulisic is presently enduring the biggest dip of his Chelsea career to date. He hasn't scored in 17 appearances in all competitions since that goal in a 3-1 win over Leeds on December 5.

Like Timo Werner, Kai Havertz and Hakim Ziyech, the 22-year-old underperformed at the end of Frank Lampard's reign as manager.

However, unlike some of his fellow attackers, Pulisic hasn't bounced back under new boss Thomas Tuchel, which has come as a major surprise, given it was the German coach who gave the American his professional debut at Borussia Dortmund back in 2016.

Tuchel's appointment at the tail end of January looked like excellent news for Pulisic, who has spoken in glowing terms about their time together at Signal Iduna Park.

Yet just over six weeks later, Pulisic has yet to start a Premier League game under Tuchel. He did get the nod for the FA Cup fifth-round clash with Barnsley last month but  performed poorly against Championship opposition.

Interestingly, Tuchel has openly wondered whether their shared history is proving a hindrance rather than a help for Pulisic in terms of Premier League playing time.

"Maybe his biggest problem is that I know him from Dortmund and I think there he started mainly in the cup games," Tuchel said after giving the 22-year-old just four minutes of action in Monday's 2-0 win over Everton.

"It is my responsibility and it is a bit unfair but I know what impact he can have in the last 20 or 30 minutes. He was a bit unlucky in the last few games. It isn't a lack of trust or quality; it is just that he will have to be patient."

Worryingly, though, Tuchel then compared Pulisic's situation to that of a fringe player. 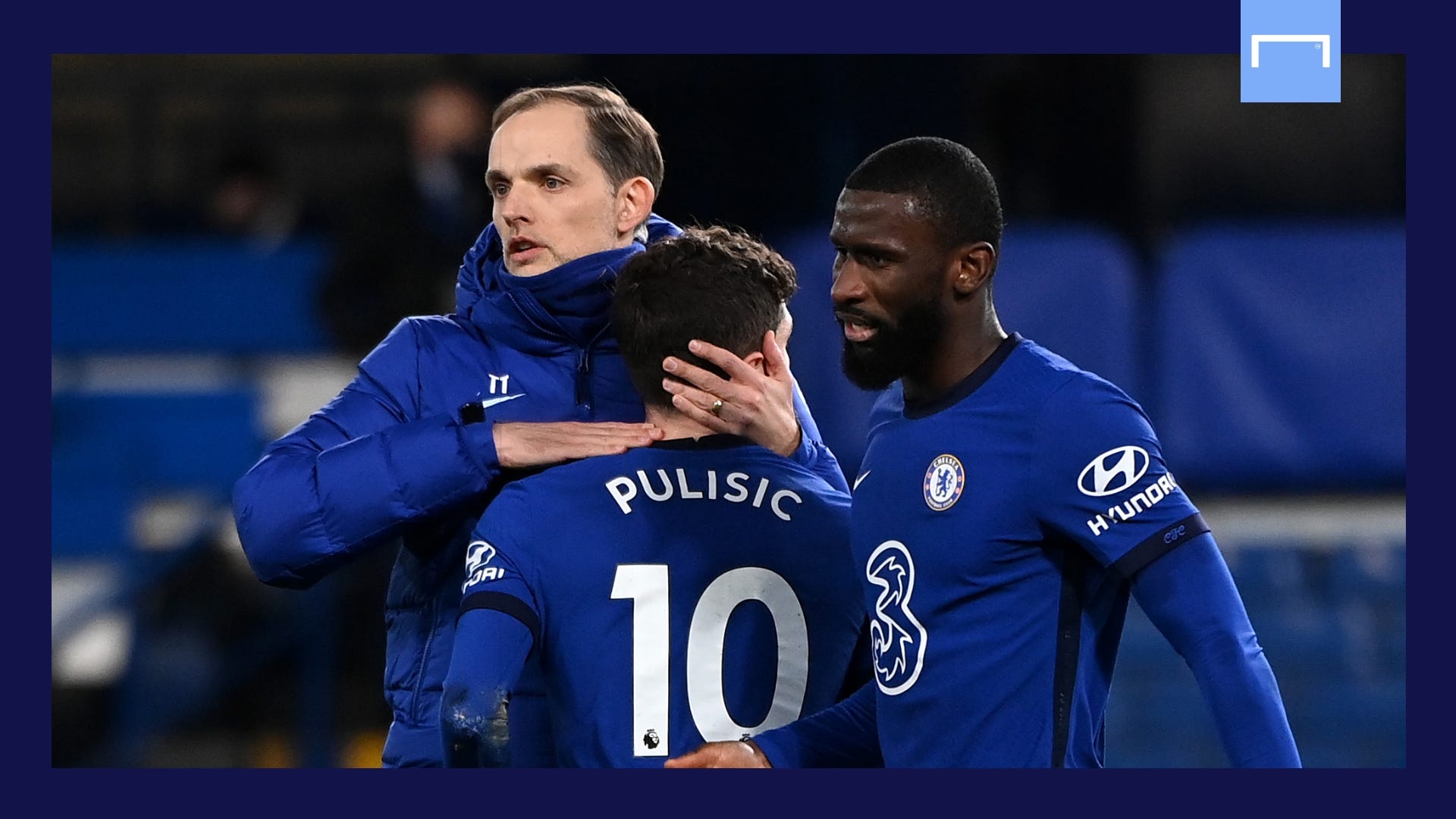 "I have another guy who I would love to mention in Emerson [Palmieri], who suffers from bad decisions by me," the former Paris Saint-Germain coach added. "He does not play but he is an amazing guy who trains at the highest level and he never lets the team down with his mentality.

"It was a super-hard decision to have Emerson out of the squad [against Everton]. But it's like this: we have a strong group. The guys have to keep on fighting [for places]. There's no other way."

Pulisic was just a teenager when he began to make his mark at Dortmund and of the 55 appearances he made under Tuchel, just under half were starts (27).

Of course, that was a perfectly logical and prudent way to manage such a young footballer but Pulisic has since gone to become a symbol of his national team and arrived at Chelsea in 2019 for £58 million ($79m).

The Blues are entitled to expect a significant return on such a massive investment. If they aren't repaid in top-class performances on the field, they may seek remuneration off it, and it's no surprise that Pulisic has already been linked with a move away from west London.

However, it is far too early to be talking about a transfer, with Tuchel yet to provide his employers with an assessment of the players ahead of the summer window. For now, he is rotating regularly in order to give each and every member of the squad a chance to prove his worth to the new project.

In addition, Chelsea still rate Pulisic highly.  He was their star man when football returned after its coronavirus-enforced suspension of play last spring,  scoring five goals and providing four assists in 11 games.

Indeed, Pulisic was pivotal as Chelsea reached the FA Cup final while securing a top-four finish in the Premier League. They may even have beaten Arsenal at Wembley had he not been forced off with a serious muscular injury in the 49th minute, given it was he who had opened the scoring in a 2-1 defeat. 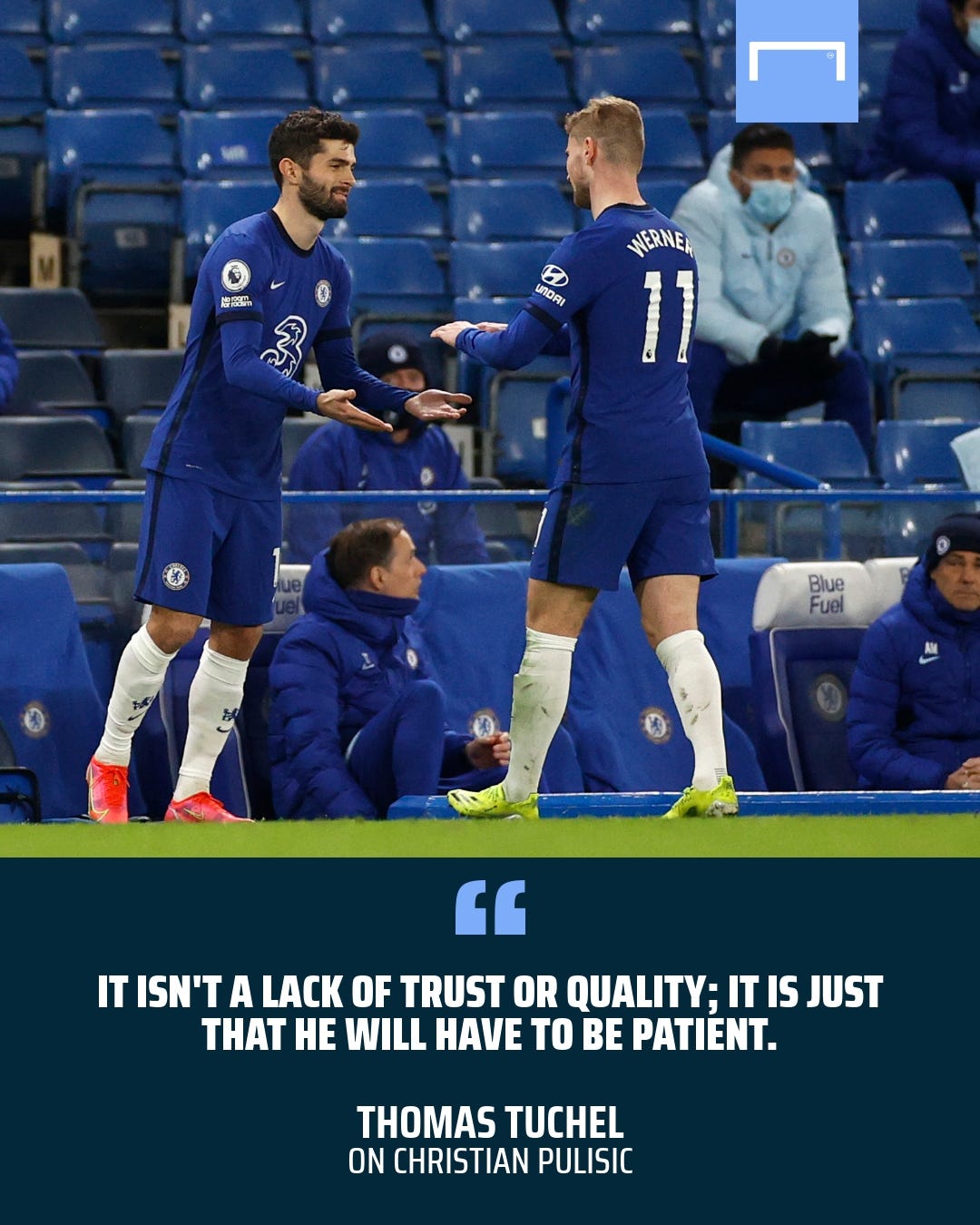 It's also worth remembering that he has been plagued by fitness problems this season, which helps explain why he has thus far struggled to produce his very best form.

He has just two goals and one assist in all competitions in 2020-21 and it's clear that he now needs a run of games if he is to make the most of his obvious potential.

"Christian needs to look at the players he sees around him who have made the jump to world-class, guys like Raheem Sterling, Sadio Mane and Mo Salah, who are now scoring a lot of goals from wide areas," Lampard said last season.

"It is important that he understands the work he needs to do that because he definitely has the talent to do it. So, he needs to try and get to that level."

Clearly, Lampard never had any doubt over Pulisic's ability. And Tuchel doesn't either.

"We have so many games and he is in my plans," he told reporters on Friday. "He is an important player and has the potential to be decisive for us off the bench."

That last part felt key: "off the bench". It's clear that he won't be getting any preferential treatment from Chelsea's new boss just because they worked together previously in Dortmund.

Pulisic's frustration is understandable, and now visible. He was meant to come on earlier in the Everton game but when Havertz's number went up, Werner told Tuchel that he needed to come off instead.

Consequently, Pulisic's introduction was delayed and he threw his arms up in the air in bewilderment. He's going to have to be even more patient in the coming weeks and months.

He will get chances to impress, but maybe not as many as he was expecting. The onus, then, is on Pulisic to make the absolute most of whatever game time comes his way, starting with Saturday's trip to Leeds.

As Tuchel quipped, "If he starts and does brilliantly, then starts against Atletico and scores two goals, then maybe he is the captain next season."

Right now, though, Pulisic would probably just settle for more than four minutes of game time.