Kylian Mbappe has shot down a "fake" tweet claiming that he wants Neymar, Mauricio Pochettino and 12 others axed from Paris Saint-Germain.

Mbappe snubbed a long-anticipated switch to Real Madrid in favour of signing a new contract at PSG last month, committing his future to the club through to 2025.

The Ligue 1 champions reportedly made the 23-year-old the highest-paid player in world football, while it has also been suggested he has been given a say in what goes on behind the scenes at Parc des Princes.

SPORTbible posted a tweet on June 2 that claimed that Mbappe wanted Neymar, head coach Pochettino and 12 others axed from the club.

They deleted their original tweet after receiving a direct response from Mbappe, who wrote "FAKE" in reply. 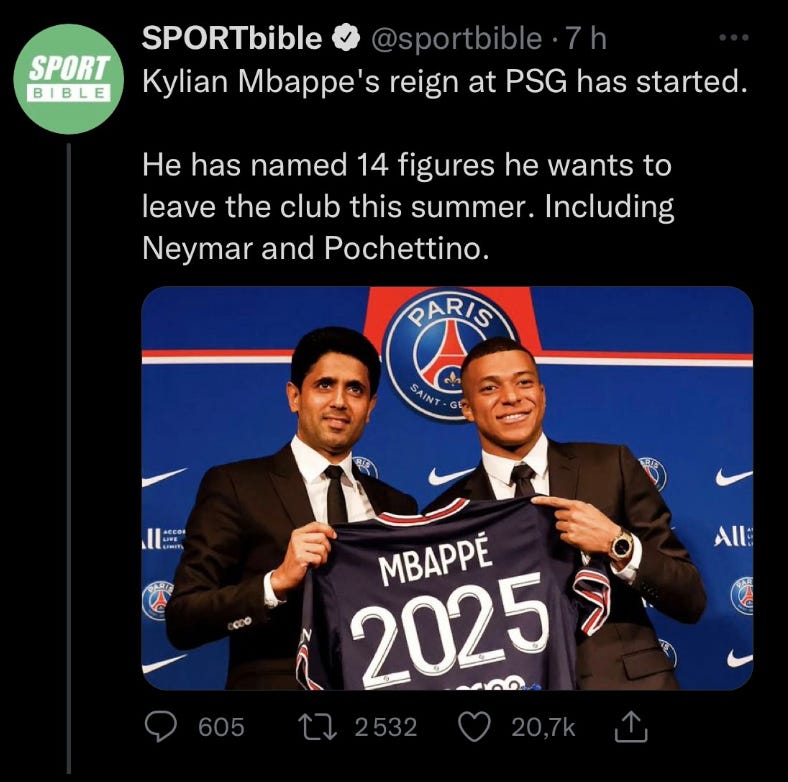 Mbappe may not have a seat on the PSG board in any official capacity, but GOAL understands that his opinion is valued and taken on board by club officials.

The Frenchman has been promised a clear project after agreeing to fresh terms, which includes more of a focus on improving the team organically, without overspending on star names.

Success in the Champions League is Mbappe and PSG's ultimate goal, with a Ligue 1 title triumph this season doing little to detract from their disappointing round-of-16 exit to Real Madrid in Europe.

Are Neymar & Pochettino staying at PSG?

As confirmed by GOAL, PSG are open to selling Neymar if the right offer comes in this summer, but the Brazilian has no plans to depart of his own free will.

The 30-year-old, who still has three years left on his contract, told Canal Plus in May: "Play well and win the World Cup and the Champions League. These are my ambitions for next season.

"It has to be with Paris. I have a contract with PSG, so there is no choice. Yes, it will be with PSG."

Mauricio Pochettino's future in Paris is less clear, however, with the Argentine head coach having taken the brunt of criticism for the club's underwhelming 2021-22 season.

PSG are reportedly looking to replace Pochettino, with former Madrid boss Zinedine Zidane touted as the top candidate for the role.

The ex-Tottenham boss has a contract with the Ligue 1 champions that runs until 2023 although, at a time when he was being strongly linked with Manchester United, Pochettino's relationship with PSG was close to breaking point.