Championship
Peter Staunton Click here to see more stories from this author
Chief Correspondent
09:30 03/02/2019 Comments()
Getty
Knocked off the top of the table, the club coached by Marcelo Bielsa are still capable of automatic promotion but have got to sort out their form

Welcome to Leeds United; a club with a chip on its shoulder. Go to Elland Road – especially when they’re losing - and you’ll not be long hearing it.

A favourite song when they go behind or when a decision goes against them is “the Football League’s corrupt”. The one that usually follows shortly after is “Sky TV is f*cking sh*t”.

Stick around the ground long enough and you might hear “European champions,” sung while thousands of those distinctive white, blue and yellow scarves whirl around overhead.

That song gets to the root of another time Leeds were screwed over; the infamous 1975 European Cup final defeat to Bayern Munich. And if a Leeds fan of a certain vintage starts bending your ear about that game it won’t be long until the 1973 UEFA Cup Winners’ Cup final defeat against AC Milan is brought up.

It all comes back to the common consensus that someone, somewhere wants to beat Leeds down and make sure they stay down.

Around these parts exists a train of thought that the Football League and Sky are complicit in a pact to trap Leeds in the Championship forever; make money off them because they are the biggest draw.

That paranoia fuels Leeds supporters and makes them desperate to get out of this division for good - and stay out.

Leeds fans love to feel hated; to feel the world is against them. 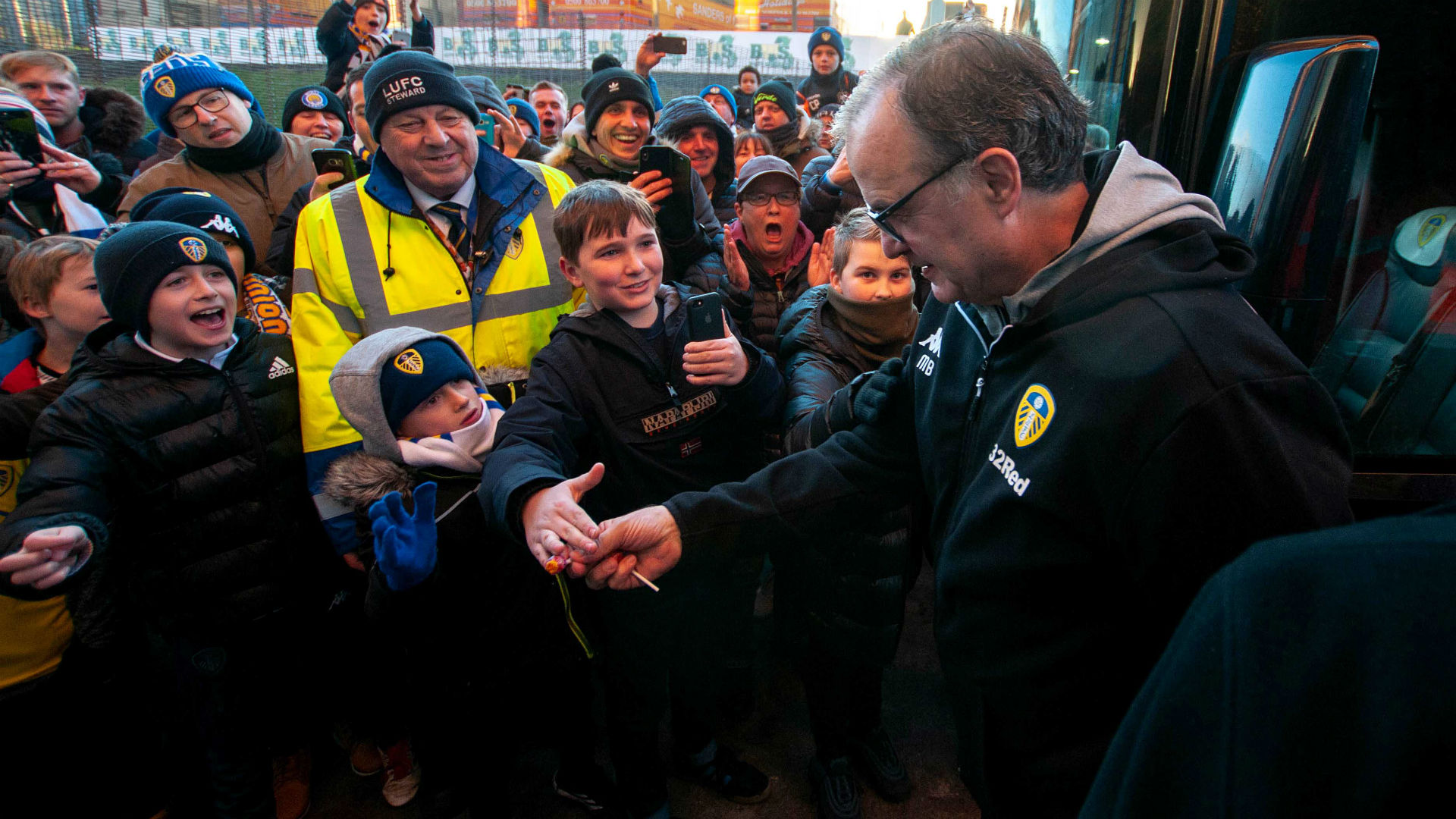 That’s why the “Spygate” drama last month forged Marcelo Bielsa and the Leeds fans closer together. They love him here. He showed up on Saturday, got off the Leeds bus and handed out lollipops to local kids who were waiting to greet the team.

After Spygate, the sense that Leeds were being singled out as a pariah club was inescapable. So the fans went to Elland Road and mimicked the use of binoculars while the players went out and battered Derby 2-0.

At various stages during matches, the Argentine crouches on the sideline, patrols it in his club-issued coat and tracksuit pants. He has become renowned for sitting on an upturned blue bucket to give himself a better vantage point of the Elland Road pitch.

After the game, where you’ll see badges and scarves being sold outside the ground, some local entrepreneurs have taken to selling their own versions of the bucket. That is until the local police show up and ask them to move on.

The cries for Bielsa to have a statue built alongside the one of Billy Bremner for Spygate might be tongue in cheek, but if he becomes the man to end their wandering in the desert, well, nothing is off the table.

Trouble is, Leeds are struggling. They had lost three of their last five league games before Norwich City came to visit. A win for Norwich would put them top. A win for Leeds would see them six points clear with 16 matches remaining.

Days like this haven’t come around too often in the recent history of Leeds. Beforehand, some fans were regarding it as the most important one that the club had played since the 2006 Championship play-off final against Watford. That day they lost 3-0. 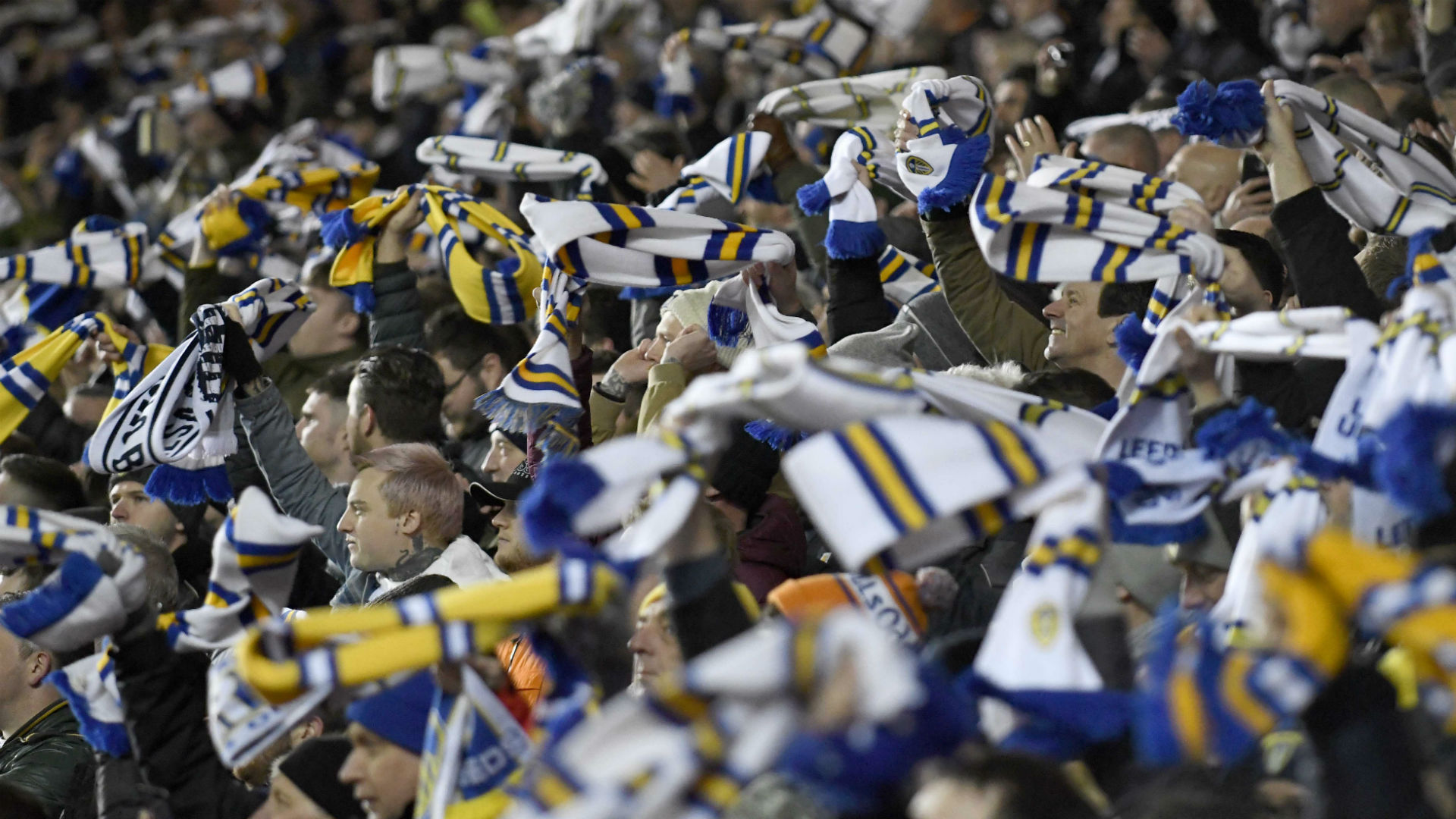 Days like that have always kept post-2004 apocalypse Leeds feet on the ground. They’re not the most optimistic bunch and – even coming into this game three points clear at the top of the table – nobody was getting carried away.

A common sentiment is that if the fates can somehow conspire against Leeds then the fates will conspire against Leeds. They’ve blown it so many times lately – including a late-season collapse under Garry Monk two seasons ago when it looked like they’d finally be back in the big time. The anger towards the Football League and Sky TV give the fans something to blame.

But Leeds wouldn’t be Leeds if they weren’t making it hard for themselves. The sense of anticipation before Norwich was closer to a cup final. If only they could go six points clear. If only they could gain some breathing space in a strangulating division. Leeds were 1-0 down in five minutes, 2-0 down before half-time. The third late on had thousands of seats thwacking upwards and locals shuffling home early.

Even when they’ve been winning under Bielsa there is a sense of struggle and suffering about everything Leeds do. A two-month winning streak concluded with a couple of 3-2 results in their favour which came in the very last minute of injury time. The last of that sequence was against Blackburn on Boxing Day. Since then things have gone off track.

The Derby win here a couple of weeks ago was probably the best they’ve played this season and was a rare easy game in a league renowned for its landmines. That game aside, Leeds are generally in a hole every week and the fans turn up to see if they can dig themselves out of it.

It’s no conventional way to try and win promotion and the scale of Leeds’ plight stretches to 15 years now. The desperation is becoming profound. They are tantalisingly close with this set-up, but hand on heart everyone knows it would be the most Leeds thing in the world to muck it up.

Bielsa had begun to run that fear out of town. The balancing act for Leeds fans had been to maintain some of their old pessimism even while acknowledging that now, at last, their time could be coming.

Norwich blew a hole in that. They came and did a professional job. No 3-2 comeback here, Leeds were well snuffed out. The goals from Mario Vrancic and Teemu Pukki came at key times. The Bosnian’s early free kick was met with a deathly silence; Pukki’s 22nd goal of the season with shrugs of inevitability. Vrancic’s second with 13 minutes to go - ultimately - a slap in the face.

A late goal pulled back by Patrick Bamford was welcomed in the sense that the striker really needs to get going now after injury and could well boost Leeds's flagging efforts in the late stages of the season. 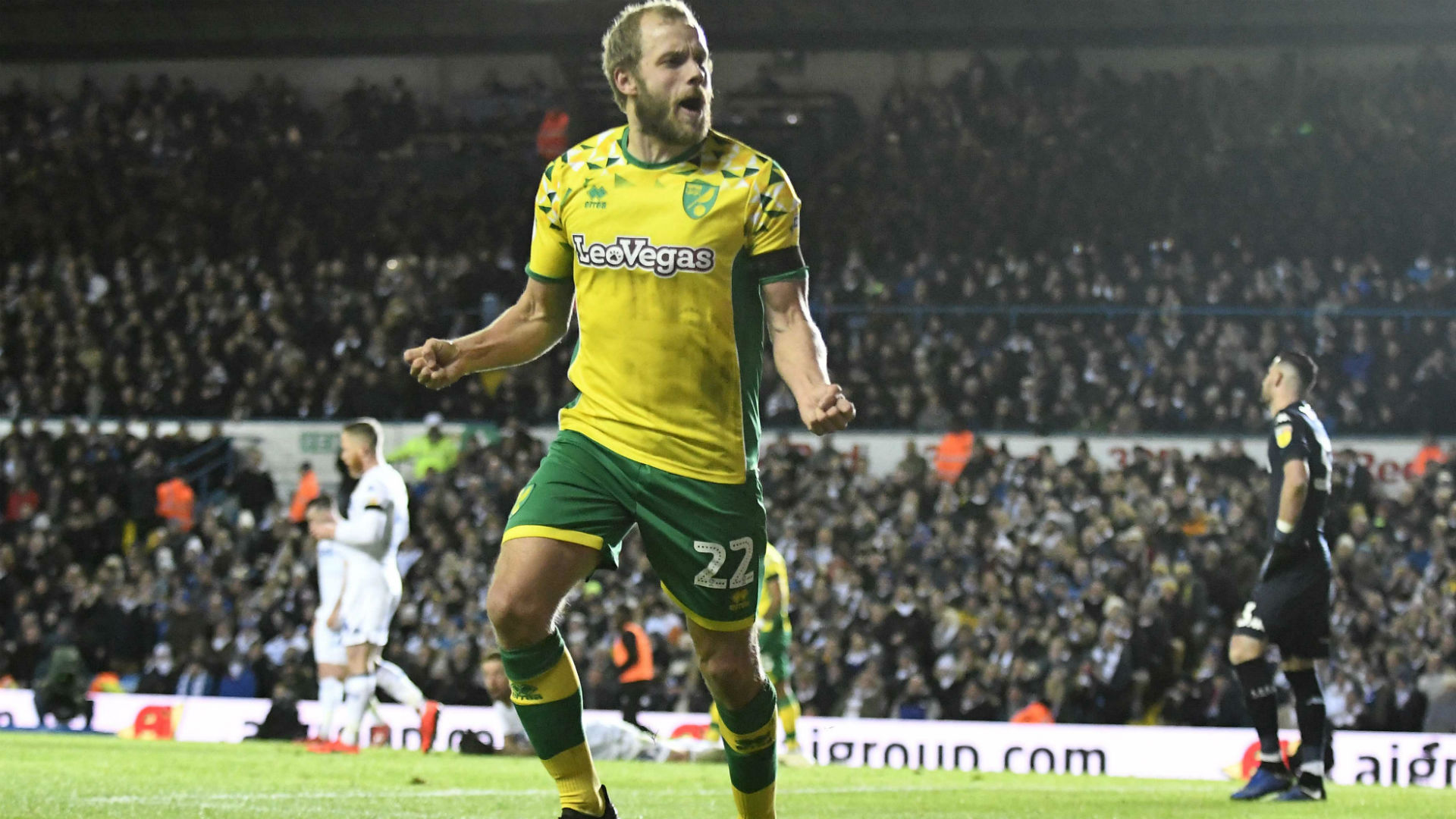 Bielsa tried. He made three changes before 65 minutes were played including two at half time. One who came on was young Jack Clarke, fast becoming a favourite around here. The big clubs are already circling; Tottenham and Manchester City have both been credited with interest in Leeds’ latest star academy graduate.

Kalvin Phillips – who didn’t play – and striker Kemar Roofe are also attracting Premier League attention. Bielsa, meanwhile, is not known to let the grass grow under him at any club he’s worked.

Hence the desperation. Leeds will not get long in this golden age. The conditions are right, but they are right right now. There is no big dog in the Championship with a super budget occupying one of the two automatic promotion slots like Newcastle a couple of seasons ago.

Fans speak of this team of being more of a unit than any other Leeds team since they won the old First Division in 1992. And, more or less, it’s the same squad that tanked under Thomas Christiansen and Paul Heckingbottom last season. 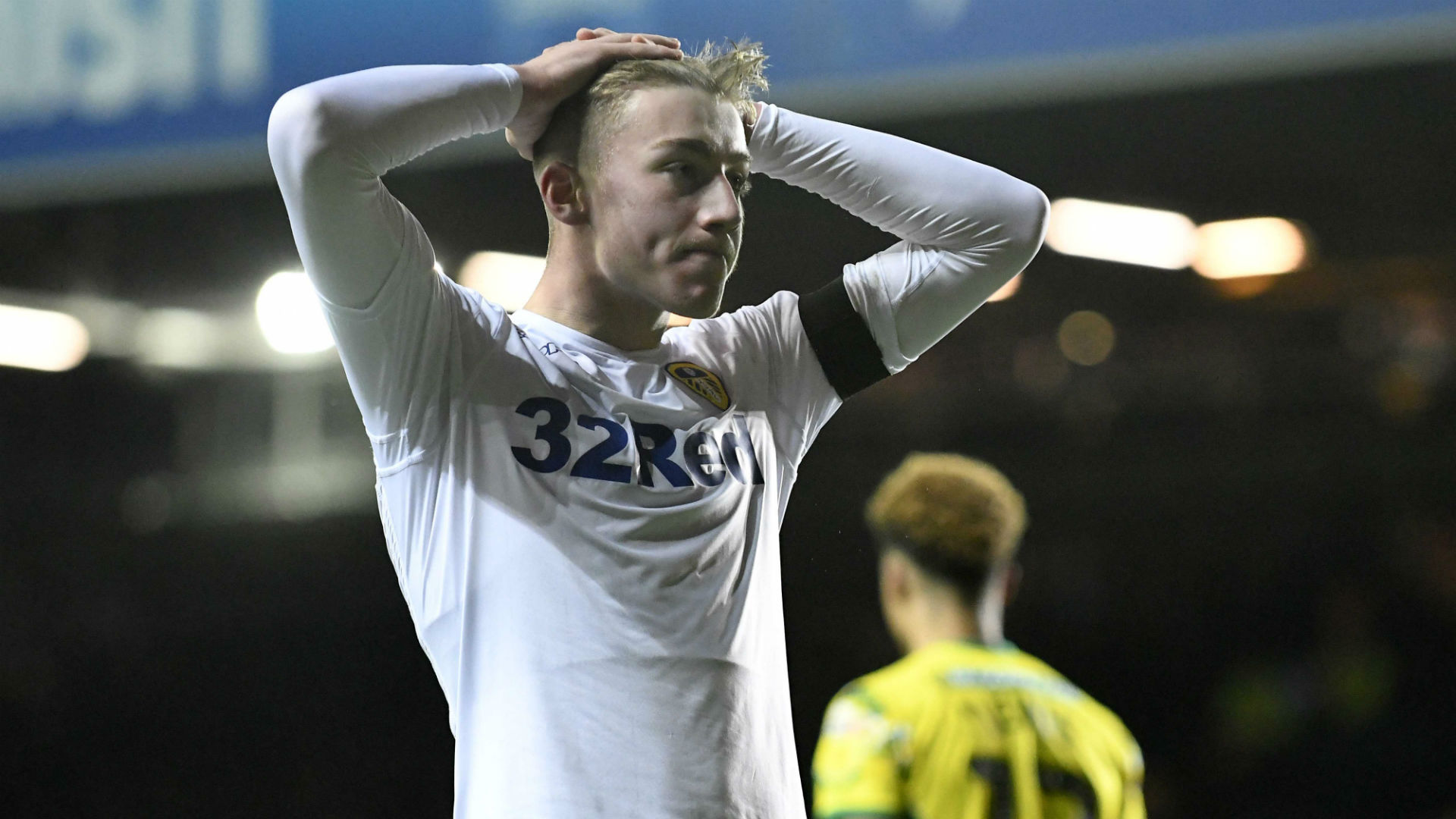 In a country where fans have become obsessed with bought-in solutions, Bielsa harks back to a time when a head coach rolls his sleeves up, sees what he’s got and sets about making them better.

Leeds, Norwich, Sheffield United, West Brom, Middlesbrough, they are all keeping each other in check. A run of wins for any one of them could end the race like Mo Farah kicking in the last lap of the 10,000 metres. How Leeds would like it to be them.

Hope remains; even if they expect nothing. There was no blaming Sky or the Football League for what happened on Saturday. This was their worst performance of the season at home and it came on a day when they really could have done without it.

By the end the Norwich consignment exited the away section, having finally found their voice. On the way back to their coaches for the long trip back to Norfolk, they sang. If there is one song that the rest of the country can unite in singing it’s “Leeds, Leeds are falling apart again.” It wounds.

They are still there but there is a nagging sensation that, if this swell of intensity, concentration and talent does not yield Premier League football, then it might never happen.