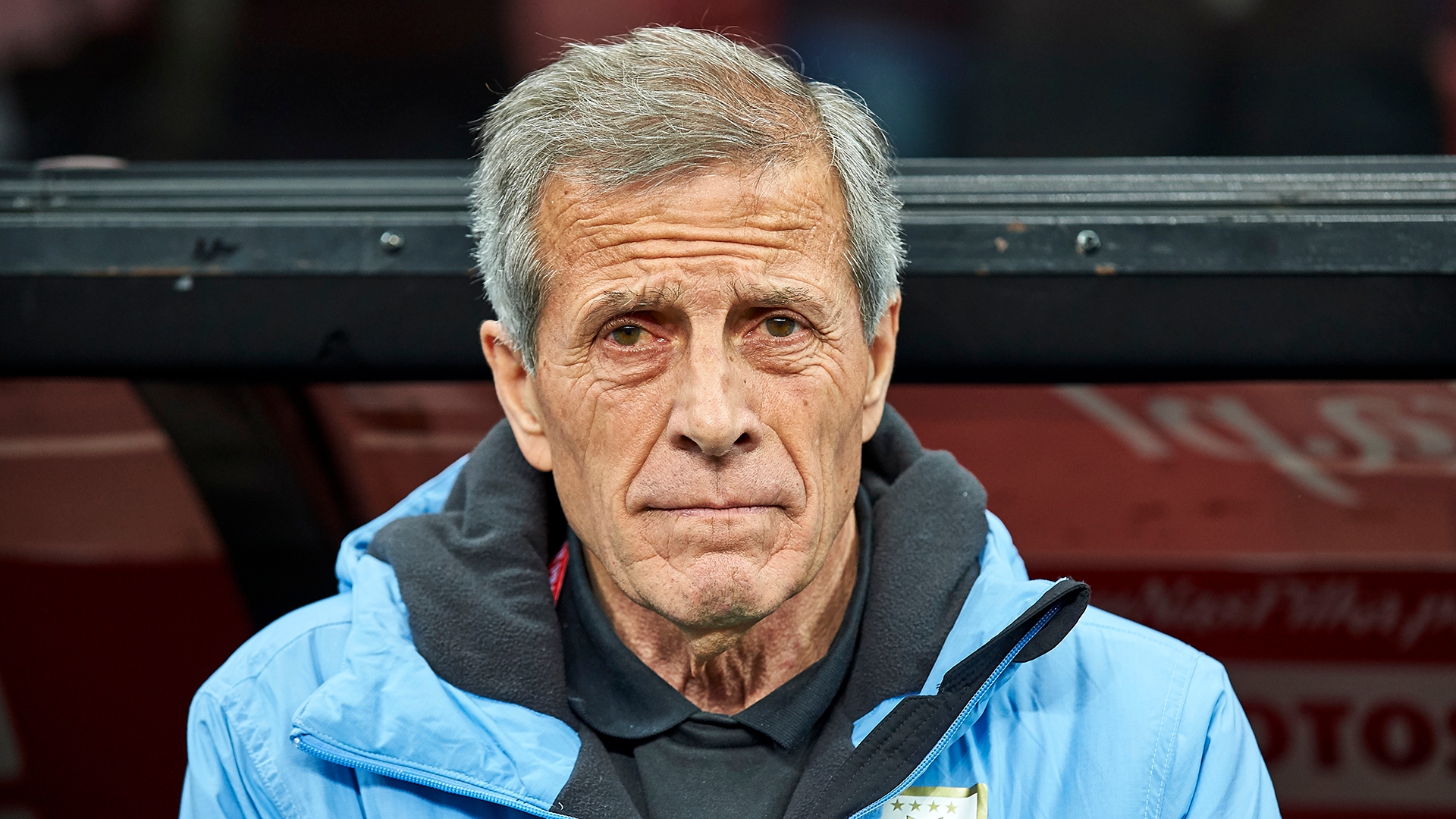 The veteran steps down as one of football's most admired coaches after 17 years at the helm of the Celeste, whom he led to Copa America glory in 2011

In a region famed for its footballing instability, Oscar Tabarez's record with Uruguay immediately marks him out as a unique figure.

In his 17 years as Celeste boss across two spells, El Maestro took the nation to four World Cups and recorded a total of 10 finals wins – the only triumphs recorded by any Uruguay coach since the 1970 tournament.

With more than 200 games in charge of South America's own little giants, moreover, he reached a mark which no other international coach in history has achieved with one country, earning in the process the respect and admiration of his players, rivals and peers across the world.

“I have grown as a player and a person thanks to El Maestro,” Luis Suarez stated on one occasion, a line of praise common amongst Tabarez's countless charges over the years. “He is one of the best coaches in the world due to his personality and how he helps his players.”

Former Spain boss Vicente del Bosque offered a similar glowing tribute to Radio Oriental in 2020: “He is a gentleman in every way, a stupendous man.”

Tabarez's most recent stint spanned no less than a decade and a half, during which time rivals Argentina went through no less than eight different trainers and Brazil five.

It was a remarkable run of sustained success and consistency, which ultimately came to an end in unjustly bleak circumstances for the much-admired veteran.

Four World Cup qualifying defeats in as many games in October and November ultimately sealed the coach's fate, as well as leaving Uruguay on the brink of missing out on the finals for the first time since 2006.

In fairness to Tabarez, the run of fixtures proved a formidable obstacle: newly buoyant Argentina home and away, a trip to Brazil in sweltering Manaus and, the final straw, Bolivia in their dizzying La Paz fortress.

However, the writing had been on the wall for the former schoolteacher, and while the 74-year-old will be missed dearly, it is hard to deny that Uruguay were in desperate need of a change as results failed to appear.

Tabarez's greatest Uruguay team, which delivered fourth place in the 2010 World Cup and Copa America glory a year later, was the perfect blend of the sledgehammer and the scalpel, typified in the four Diegos which made up the backbone of the side.

Centre-back partnership Diego Lugano and the younger Diego Godin, and ferocious anchorman Diego Perez never backed down from a battle, willing to put their bodies – and indeed, those of their adversaries – on the line for the national cause.

Further up the field, Tabarez counted on the exquisite talents of Diego Forlan, blessed with the ability to turn the game with a flick of the boot.

Add the strike-power of Luis Suarez and Edinson Cavani to the mix, as well as a settled, intensely committed supporting cast across the pitch, and the Celeste were a match for anyone in international football.

Uruguay's Copa victory in 2011, their first since 1995 and achieved following the elimination of hosts Argentina at the quarter-final stage, was the crowning moment of Tabarez's reign.

But perhaps his greatest legacy was the implementation from day one of the 'Process of institutionalisation of the national teams and players' growth'.

Under that rather unwieldy moniker every level of Uruguayan football, from Under-15 to senior level, was brought under his remit, with each obliged to play a similar style of football and prioritise players' education and development as well as football ability.

Typically of El Maestro, collective spirit and solidarity was central to that plan. “The sacred word in my coaching team is respect,” he pointed out on one occasion.

“The first thing we teach kids at 13 when they come to us is to say hello when they walk through a place where there are people, even if they don't know them, and then to say thank you: to the people who do the laundry, who serve the food.”

Every single member of the Uruguay squad today grew up in the Process, ensuring a continuity of talent and team unity that is often impossible to foster in the stop-start world of international football.

At senior level, meanwhile, the cracks following those golden years began to appear slowly, as that vital old guard aged or stepped aside.

The Celeste coach was also fighting his own battle, against the debilitating Guillain-Barre syndrome, which became more acute in the build-up to the 2018 World Cup and severely affected his mobility.

While Uruguay remained capable of fighting their way to victory against even the toughest of rivals, taking down hosts Russia and Portugal at that finals before losing to eventual champions France, serious contradictions had arisen in a new-look squad.

The fire and muscle of men like Lugano, Perez and Egidio Arevalo Rios was replaced by more elegant, cerebral talents in the middle of the pitch, ball-playing midfielders such as Lucas Torreira, Rodrigo Bentancur and Federico Valverde who did not fit into the typical Celeste mould.

Wedded to the old school, Tabarez continually struggled to adapt his conservative tactics to a squad, and indeed sport, which has changed drastically in the time he has spent at the Uruguay helm.

Indeed, he has never been particularly comfortable with flair players: Cristian Rodriguez, Gaston Ramirez and, most recently, Giorgian de Arrascaeta drifted in and out of his teams without ever managing to make much of an impact in El Maestro's rigid game-plans.

At the same time, the press back in Uruguay was decrying both the lighter touch of the new generation and by extension their coach.

The biggest scandal of October's 3-0 defeat to Argentina was not so much the scoreline as the fact that the visitors had committed 'only' five fouls in the Monumental and not earned a single yellow card – an unforgivable lack of aggression in the land where the ferocious tackle, preferably with one's forehead, is king.

The Celeste did their best to revert that oversight in November when Lionel Messi & Co. came to visit and racked up 20 infractions, but the result was the same: defeat and a further slip down the qualifying table.

A disastrous first half in La Paz and another disjointed performance proved the coup de grace, and now just four games remain for Tabarez's successor to turn around the side's fortunes and book their place in Qatar.

It is far from a hopeless situation, with Uruguay just a single point behind Colombia and the final automatic qualifying spot.

Compared to the infernal run of qualifiers that preceded Tabarez's demise, the as of yet unknown new incumbent will begin with matches against stragglers Paraguay and Venezuela before finishing qualifying with clashes against Chile and Peru.

The talent is also present. As well as the aforementioned players, young stars such as Ronald Araujo, Brian Rodriguez, Facundo Torres and Agustin Alvarez Martinez are already beginning to make their mark at senior level, while Uruguay still boast one of the world's premier defenders in Jose Maria Gimenez and, when used in carefully administered doses, the goals of veteran strike pair Suarez and Cavani.

Uruguay's conundrum is thus one of identity rather than ability, masked somewhat these past years by the venerable figure on the bench.

Whether Uruguay will embrace the latest developments in tactics and coaching or continue to appeal to their tradition of uncompromising commitment and resistance on the pitch will depend much on who is chosen to replace El Maestro.

While the dynamic, immensely successful Marcelo Gallardo has been mentioned as a possible heir, the chances of landing the River Plate boss appear scant at best.

A more likely candidate is current Internacional coach Diego Aguirre, a Tabarez disciple who indeed scored the winning goal for his Penarol side in the 1987 Copa Libertadores.

Aguirre is cut from much the same pragmatic cloth as his mentor and would likely continue in a similar vein tactically, albeit with a somewhat fresher outlook as a new face on the bench.

In any case, all is not yet lost for the Celeste. Qatar is still within reach, and despite those disappointing recent results the structure Tabarez left in place is still intact to be enjoyed for many years to come.

El Maestro, meanwhile, may now be gone, his dream, as he admitted in 2020, of a “last dance” in Qatar ultimately frustrated, but he will not be easily forgotten, as his reputation as one of football's most decent, honest men and a legend of the South American game has been secured for many years to come.