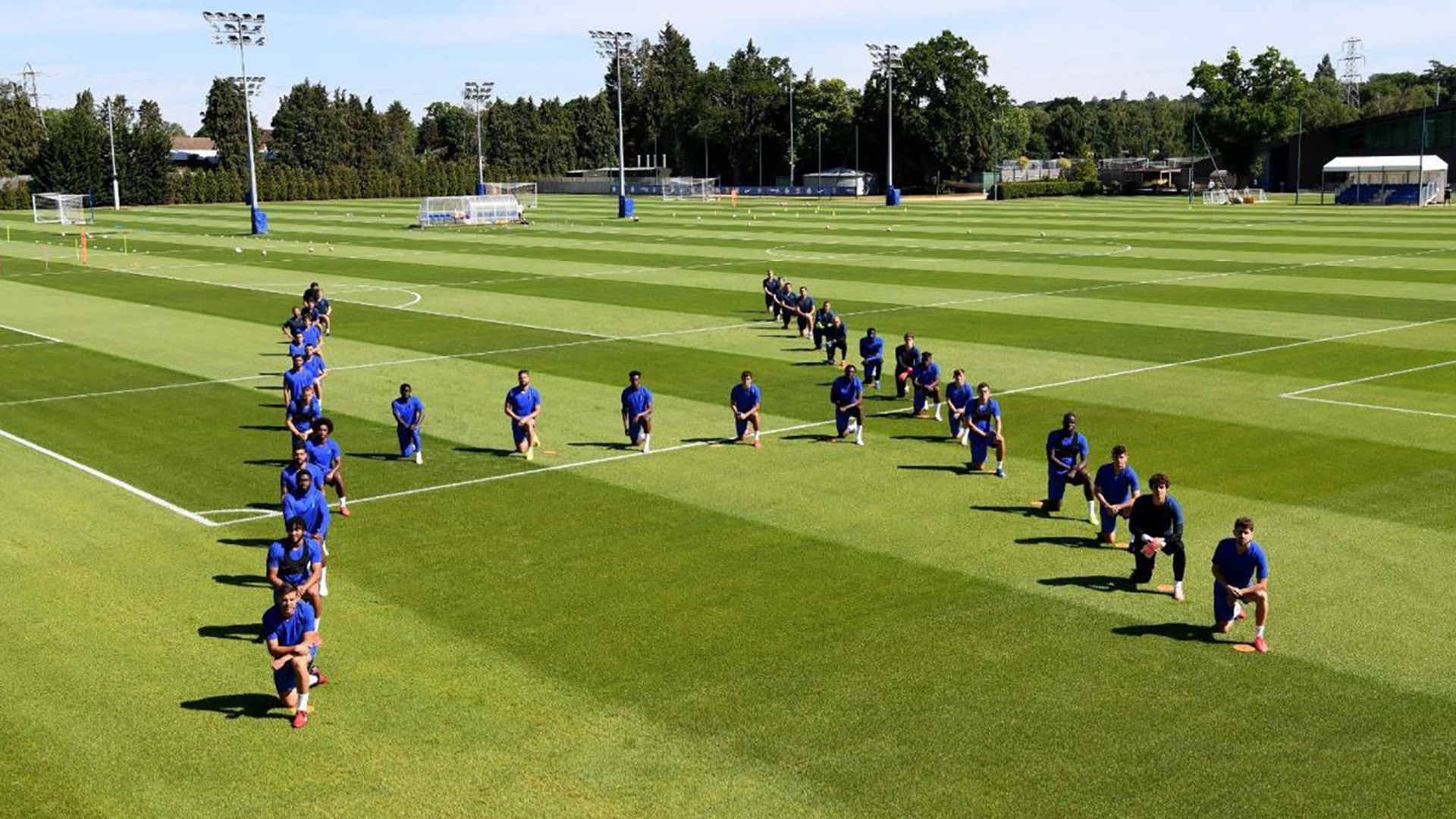 Chelsea have followed Liverpool's lead in making a stand against racism by creating a symbol in training to support the Black Lives Matter movement.

Footballers across Europe have used their online platforms to speak out amid ongoing protests in the United States over the death of George Floyd.

Riots erupted across a number of US cities last week after Floyd died while in the custody of Minnesota police officers.

Liverpool's first-team stars Joe Gomez, Virgil van Dijk and James Milner all posted the same image on social media of the squad taking a knee around the centre-circle at Anfield on Monday, with the caption 'Unity is strength'.

Chelsea have now followed suit, a number of first-team players tweeting a picture of them adopting the same kneel pose to create a giant 'H' shape at their training ground in Cobham.

Explaining the reasoning behind the symbol, club captain Cesar Azpilicueta told the club's official website: "It is something where we want to use our position to express that we are living in a world where we have to try to improve it for the future, to be a better world with more love, without hate.

"We have seen recently the result of racism and we see every day that that kind of hate has to be eradicated from society, and we have to play our part.

"There is every day the possibility to lead by example, to behave, to educate the children into a better world because we know that education is key for the future.

"We know the young generation is coming behind us and we want to leave them in a better world with more possibilities without any kind of discrimination or racism, so everything matters and it is time to speak up and to face up to the attitudes that we are seeing. There is no place for all of this.

Enough is enough. We are all HUMANS. Together we are stronger. #BlackLivesMatter ✊✊🏻✊🏼✊🏽✊🏾✊🏿 pic.twitter.com/EwAQe4QQsW

"Chelsea is a club that leads by example, always on the front foot in tackling racism and all kinds of discrimination.

"We are very proud to be part of Chelsea and to take action when we participate in any campaigns. You want to try to help in the way we can. It is part of our values and we take it very seriously.

"We see many incidents of discrimination in every part of the world and it shouldn’t happen. We are all equal and it doesn’t matter our origin, the colour of our skin, our religion, our sexuality, we are all human. To have the same opportunities and respect for each other is the key, next to education, to see all people as other human beings and not to discriminate.

Manchester United striker Marcus Rashford was also vocal on the issue at the start of the week, as he expressed his belief that the world appears to be "more divided than ever" in the wake of the shocking events in the US.

Meanwhile in Germany, Jadon Sancho - who plays alongside Rashford for England - celebrated the first of his three goals in Borussia Dortmund's 6-1 win over Paderborn on Sunday by revealing a t-shirt with the message 'Justice for George Floyd' emblazoned across the front.

Sancho wrote on Twitter after the match: "A bittersweet moment personally as there are more important things going on in the world today that we must address and help make a change.

"We have to come together as one & fight for justice."

Borussia Monchengladbach striker Marcus Thuram made a similar gesture after scoring during a 4-1 win over Union Berlin earlier in the day, getting down on one knee in solidarity with an anti-racism campaign which is now stretching across the globe.