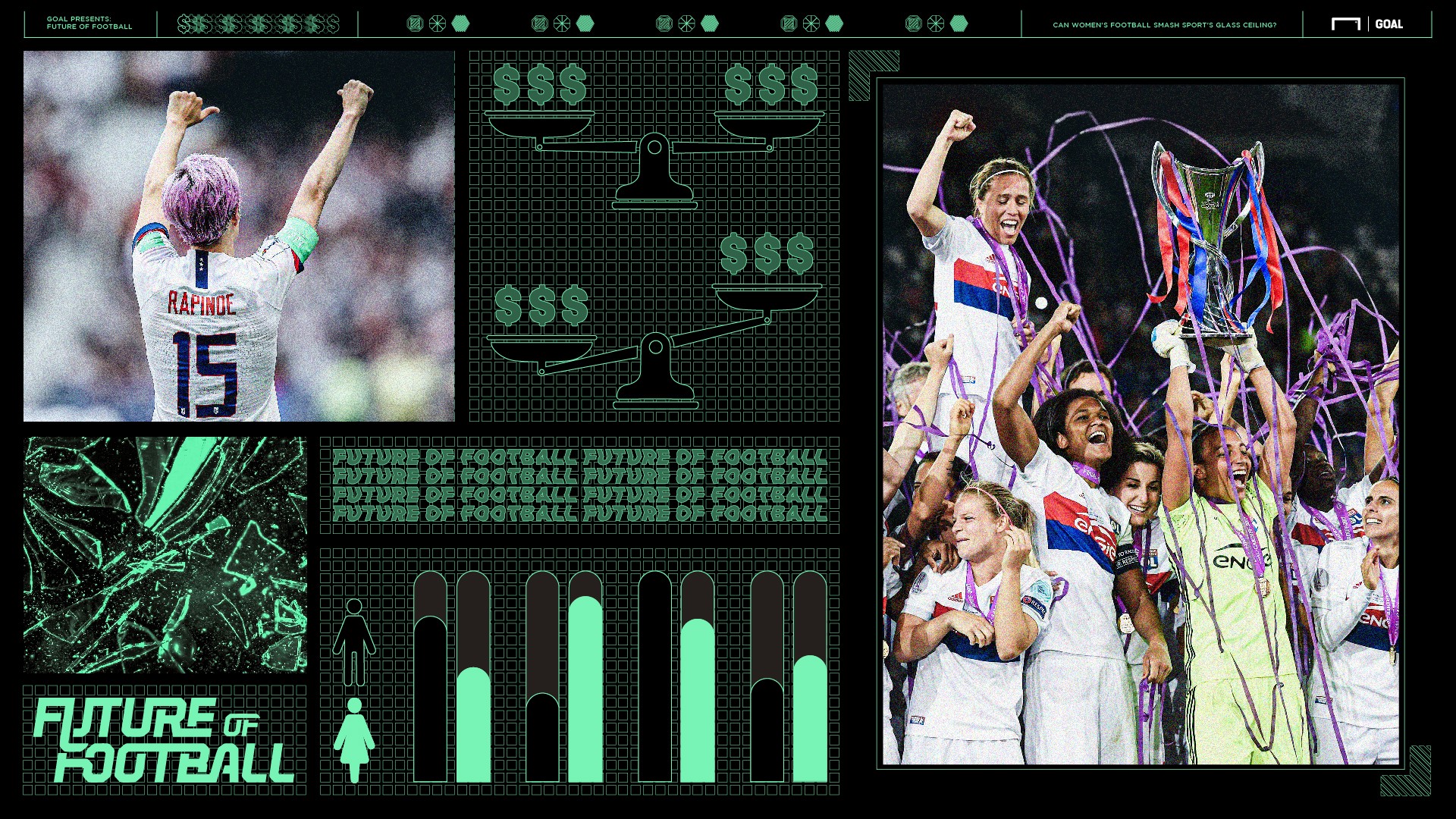 The 2019 Women's World Cup success was a bellwether for the future of the sport, but there remains a systemic divide compared to the men's game

As the U.S. women's national team waited to be presented with their 2019 World Cup title in July, it felt like women’s football was in a perfect moment.

It was a moment that offered brief respite from the harsh realities of how society as a whole perceives the game.

Instead of scrolling past the ‘eQuAl pAy’ Twitter trolls, players were listening to over 50,000 people chant their support for the USWNT in their legal battle with U.S. Soccer over improved pay.

The events on that hot summer’s day in Lyon had a huge impact around the world too.

The game broke countless global records for viewing figures for women’s football. The hype heading into the tournament and the volume of interest during it helped influence businesses to see it as a viable area for advertising.

In the aftermath, FIFA committed to invest £800 million ($1 billion) in the women’s game between 2019 and 2022, with Visa, the World Cup’s title sponsor, already signed up to sponsor all of UEFA women’s football competitions until 2025.

In that Women’s World Cup bubble, it felt like the questions over support and commercial interest that have long been asked of the game had been answered.

The latest FIFPRO report on women’s football, released at the end of April, confirmed a lot of these positives.

“There is greater commercial interest in women’s football; attendance in league and national team competitions show signs of incredible potential, broadcaster viewership is increasing, and many new sponsors have recently appeared as high-profile partners,” it read.

More than three-quarters of the respondents to the 2019 FIFPRO Stakeholder Survey said that they believe these commercial opportunities will only continue to increase, with no responses at all “anticipating a downturn in the fortunes of women’s football from an economic perspective”.

“We didn’t start supporting women’s football as a tactical or as a short-term thing. We want to be here in the long run,” Visa’s Head of European Marketing, Adrian Farina, told Goal in November.

“This needs to be broken because the world is missing something that is extraordinary.”

The investment from big companies like Visa is exactly what the sport needs.

Reece Land, founder and managing director of NextGen Sports, an all-female agency, said: "It’s so much in its infancy in terms of the commercial side. Commercialisation in women’s football is what I think is letting the whole sector down."

It was only three years ago that he ventured into the world of women’s football. After a chance meeting with Arsene Wenger at an Arsenal youth game, the legendary coach told him that women’s football was the next big thing. Land was not going to question him.

Now, NextGen Sports is one of the biggest agencies in women’s football and, over the last few years, Land has seen first-hand how the sport has grown.

“Everything has changed, unbelievably. Where we were three years ago, compared to where we are now, the sector is worlds apart,” he says. “But I think where women’s football should be, compared to where it actually is, it’s still light years behind.

“I think the commercial growth is going in the right direction, but I think it should be far in excess of what it actually is.

“The product of women’s football is unbelievable, and I find it hard to get my head around why some of the big companies aren’t coming in and seeing the sport as a genuine marketing strategy.”

One problem that women’s football will always face, though, is a societal attitude that football is no place for a woman.

No nation is more strongly associated with women’s soccer in the 21st century than the United States. The USWNT have now won the World Cup a record four times, including in back-to-back tournaments in 2015 and 2019.

The men’s team, on the other hand, have not qualified for the finals since 2014.

Yet, it was only in March this year that U.S. Soccer stated their reasons for paying the latter more were down to a fundamental difference in “overall soccer playing ability” between men and women.

It claimed the argument is not “a sexist stereotype" but instead “indisputable science".

That there was such deep outrage, controversy and change in the aftermath was positive.

In U.S. Soccer’s explanation, though, lies another key problem that plagues the women’s game: comparisons to the men’s game.

Sports such as tennis and boxing see their female athletes stand alone to be celebrated. However, the talent and achievements of female footballers are belittled by comparisons to the men’s game. Incredible investment has helped bloom that side of the sport into the showpiece it is today.

Is it really such a surprise that the best men’s players in the world, the majority of whom have come through academy set-ups with millions behind them, produce a better quality product than the best women’s players?

One has been funded and sponsored for 100 years, with access and investment on every continent. The other was banned for 50 years, just as it was taking off, and faces chronic under-investment with professional infrastructure weak at best in most countries.

How can you compare them? Such comparisons mean that female footballers are not respected for being at the elite level of their own sport.

“While football’s doors are beginning to open to women, the professionalisation of the women’s game is still contending with the effects of decades-long underinvestment and exclusion,” April’s FIFPRO report read.

“Global standards for the conditions of players are lacking, subjecting players to a range of adverse working conditions and serving as a barrier to the growth of the industry.”

In its recommendations to address these issues, the report said that financial investment alone was not the answer.

"The women's game requires a common vision that unites national strategies and implements regulatory interventions to achieve sustainable growth and employment,” it said.

For such change to happen, the people in power need to be on the same page: one that supports women’s football.

For all the things that can be said about Phil Neville’s unspectacular reign in charge of England’s women’s team, he has changed a lot of attitudes within the Football Association.

Having spent his whole career accustomed to a life of luxury as an international and Premier League footballer, he constantly questioned why the women received inferior treatment when it came to basic things like transport.

“I’ve got to fight on behalf of my players to make sure they get the best,” he said in March, before it was announced he would be stepping down in July 2021 before the Olympics. “We need to give ourselves the best opportunity to do well.”

These are elite level women’s footballers, after all, regardless of how that looks in comparison to the men’s game. The attitudes among those in the positions of power at clubs, leagues and governing bodies do not reflect that fact.

Few clubs boast about their inclusion ethos quite like Liverpool – but a report by The Athletic recently exposed how the women’s team does not fit into that.

On the club’s pre-season tour of the U.S., which included both first teams, one player from the women’s side was allegedly forced to travel alone due to a nut allergy, rather than the plane being made nut-free.

That was just one instance the report revealed of poor treatment, with others including players having been housed in sub-standard accommodation with rats and leaks.

How is a fan of Liverpool’s men’s team going to take the women’s team seriously when they see the way their club treats them?

While Jurgen Klopp’s side are reigning European champions and would have been undisputed Premier League champions in 2020 if not for the coronavirus pandemic, the women were on course to be relegated from the Women’s Super League.

On the other side of Stanley Park, things are much different.

“Regardless of the men’s team doing well or not well, regardless of who the manager is, the support for the women’s team has never wavered. The club are massively behind us,” Willie Kirk, manager of Everton’s women’s team, told Goal earlier in the 2019-20 season.

The Toffees have continued to strengthen the support for their women’s team this season.

After enjoying a January transfer window full of statement signings, they opened a new stadium in the centre of Liverpool in February to be the home of Kirk’s side and then, in March, announced that the women would have a new strategic leadership team and increased funding.

Meanwhile, as well as running NextGen Sports, Land is the co-founder of the Women’s Sports Alliance (WSA), a support and protection network for elite individuals in women's sport.

The WSA has recently been investigating the problems with the commercialisation of women’s football in England and is set to meet with the FA to discuss the issues and solutions it believes it found.

“Are the marketing directors of [sponsors] getting enough out of the money that they are pumping into women’s football?” Land asks. “If not, when that contract expires, are they really going to reinvest that money?

“If you look at the Women’s Super League, for example, having Barclays [as a title sponsor] is unbelievable because it’s an extra revenue stream just by selling the naming rights of that league. The Championship needs one. The National League needs one.

“You’re telling me that, out of every single company in the UK, you can’t find one that wants to sponsor the naming rights for the leagues?”

Unfortunately, not everyone in a genuine position to improve the state of the game is willing to do so.

From U.S. Soccer’s “indisputable science” to Liverpool’s treatment divide, so many people in positions of power in football take an approach that is to the detriment of female players.

And these views will continue to reflect in how society treats it. Women’s football has proven its value. It showed last summer it has universal, growing appeal, that it can stand alone, entertain millions and make money, just like the men’s game.

The USWNT superstars are on the frontline of that fight. Their sporting and commercial successes support a bid for equal pay and financial reward that matches their achievements.

However, while professionalism in the sport grows and interest trickles down from the World Cup to domestic leagues, the dismissal of the USWNT’s equal pay claim at the beginning of May was a reality check for women’s football.

If those who can make a difference by backing the game choose to look the other way at creeping decay and institutional inequality, change can never come. An opportunity to level the playing field will be missed.

A genuine shift in attitude is not easy, by any means. It is also not impossible.