When he was signed for Real Madrid from Chelsea in the summer of 2019, Eden Hazard declared that he wasn't a 'Galactico'.

“I'm not a 'Galactico', not yet, [but] I hope to be one day,” the Belgian stated. “Here I start from scratch. I don't consider myself a 'Galactico', but a very good player."

However, the playmaker's €100 million (£88.5m/$112m) price tag and status tells a different story. Madrid sign Galacticos and Hazard joins a long list of superstars who fall into that category.

But what exactly is a Galactico? Goal takes a look at the origin of the term as well as the signings who became poster boys of the transfer policy.

Galactico is the Spanish word for 'galactic' and it is used to describe footballers who are deemed to be superstars or boast ability levels that are 'out of this world'.

As well as being supremely talented, a Galactico tends to be famous the world over and usually commands a hefty transfer fee.

The term was popularised during the 2000s during Florentino Perez's first term as president of Real Madrid when he and the club aggressively pursued a recruitment policy that prioritised the signing of such players.

Of course, the idea of assembling a team of superstars predates the Perez presidency and is not exclusive to Real Madrid.

Johan Cruyff's Barcelona side of 1988 to 1996 could be said to have featured plenty of Galacticos. It featured the likes of Romario, Michael Laudrup and Hristo Stoichkov, and was known as the 'Dream Team'.

Prior to that, Madrid boasted a team of Galacticos in the 1950s and 1960s, with players such as Alfredo Di Stefano, Ferenc Puskas and Raymond Kopa. 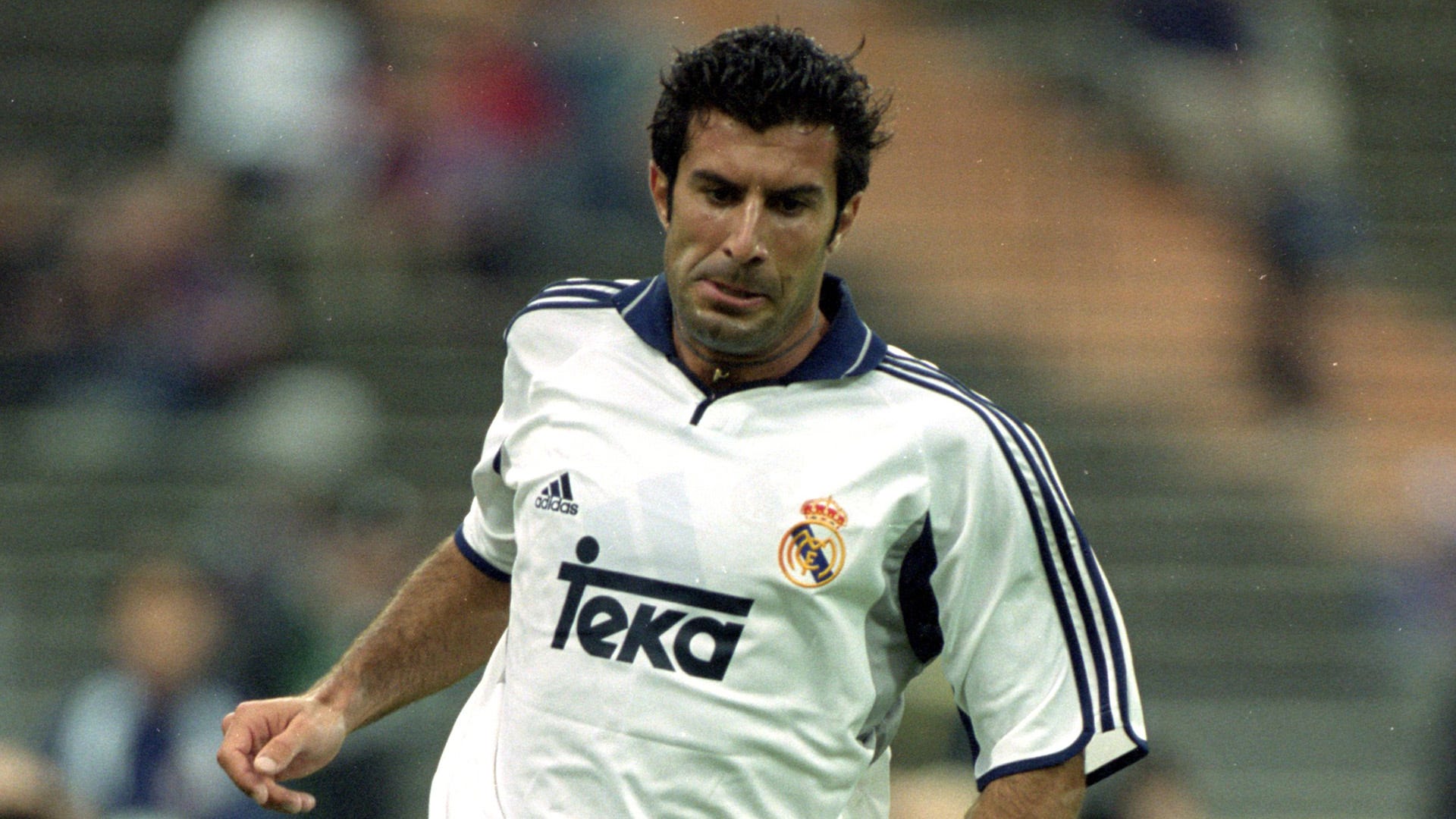 For much of the 1990s, Real Madrid were forced to play second best to Barcelona in La Liga, with Cruyff's Barca 'Dream Team' and later Louis van Gaal's side dominating the domestic landscape.

Los Blancos did end a three-decade-long European Cup drought during that period by winning the Champions League in 1998, repeating the feat in 2000, but the club was crying out for new leadership by the turn of the millennium.

Step forward Perez, who promised to overhaul the vaunted institution, with one of his campaign avowals being to bring the best players in the world to the Santiago Bernabeu each season.

Luis Figo, who arrived in the summer of 2000 from arch-rivals Barcelona for a then-record 10 billion pesetas (£37.2m/€62m), was the first Galactico acquisition of the Perez tenure. The capture of Figo was a fitting statement of intent and they went on to win their first Liga title in four years that season.

The following season, Madrid continued the aggressive pursuit of the world's best when they completed the signing of Zinedine Zidane from Juventus in what was another world-record fee: 150 billion lire (12.8 billion pesetas or €77.5m).

The club secured their ninth Champions League title that season, with the France star vindicating Perez's lavish policy by scoring a sensational winner in the final against Bayer Leverkusen.

Zidane was already a world and European champion with France prior to his arrival in the Spanish capital and the club added another globally revered world champion the season after that, with Brazil icon Ronaldo joining from Inter for a fee of €46 million. O Fenomeno scored 23 goals in his debut season for Los Blancos, helping them to their 29th Liga crown. 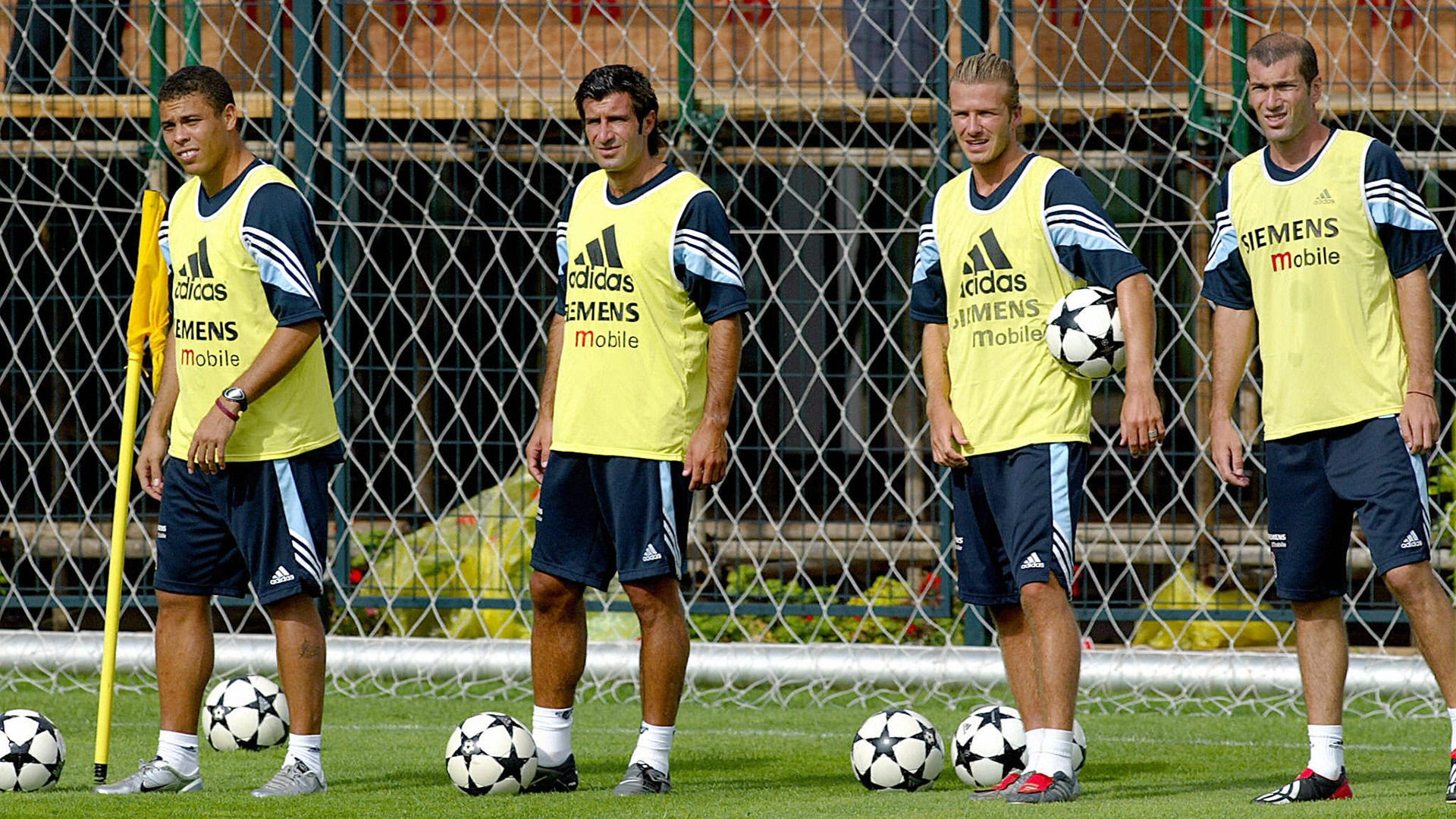 David Beckham followed Ronaldo in 2003 when he joined from Manchester United. While Beckham's talent levels may not have come close to that of Figo, Zidane or Ronaldo, he was a European champion and England captain.

However, he was also a commercial behemoth, whose appeal stretched across the world, something Perez alluded to upon landing the midfielder.

"He is a man of our times and a symbol of modern-day stardom," the Madrid president stated at Beckham's unveiling. "And what is certain is Real Madrid have signed Beckham because he's a great footballer and a very dedicated professional."

Another Englishman was the next Galactico to arrive at the Bernabeu, with Michael Owen joining his compatriot Beckham from Liverpool in 2005, but the policy began to unravel somewhat in the middle of the decade. Robinho followed in 2005, as did Sergio Ramos, and they are perhaps the last of the first Galacticos, with Perez resigning in 2006.

During the 2000s, the term Galacticos eventually became synonymous with the entire Real Madrid team, with high-profile pre-Perez signings such as Roberto Carlos and Steve McManaman, as well as youth team products Raul and Guti sometimes referred to using the tag. 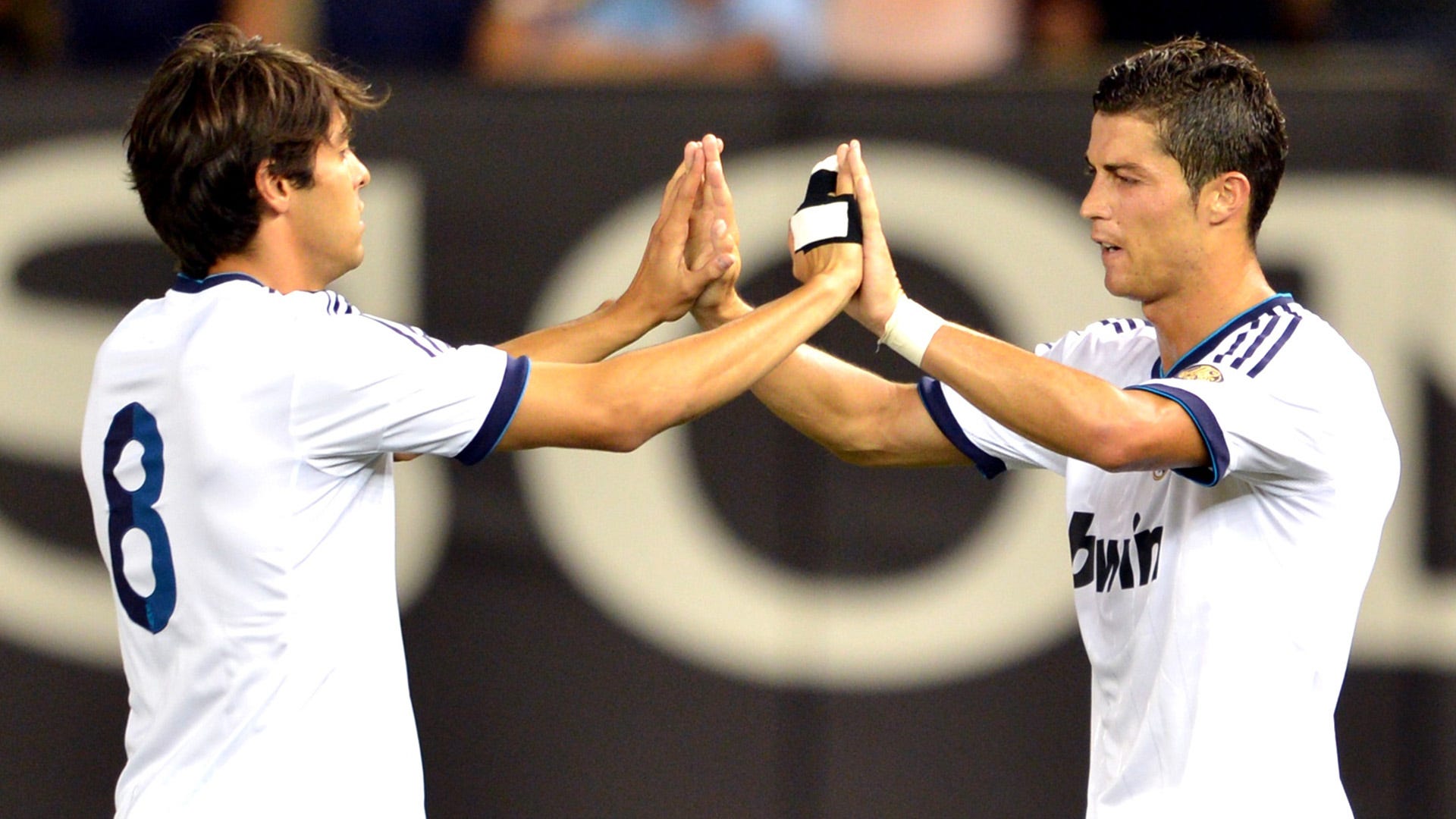 The second Galactico - and current - era arose out of a similar context as the first, with Perez returning to the role of Real Madrid president in 2009 amid a period of relative decline at the Bernabeu.

Pep Guardiola had delivered a treble for Barcelona during the 2008-09 season and the Catalan giants were practising an exciting brand of football that would soon become known as tiki-taka. The tide was turning in Barca's favour when it came to El Clasico too, with the Blaugrana winning both games that season.

Perez replaced Ramon Calderon in 2009 and immediately set about addressing the imbalance by securing the services of Kaka from AC Milan, Karim Benzema from Lyon, Xabi Alonso from Liverpool and most crucially, Cristiano Ronaldo from Manchester United.

The acquisition of the aforementioned four players amounted to a total cost of €225 million. It was Perez's new and improved Galacticos policy in action.

Angel Di Maria and Mesut Ozil followed in 2010, joining from Benfica and Werder Bremen respectively, with Luka Modric signing from Tottenham in 2012.

Madrid broke the world transfer record in 2009 to sign Ronaldo from Manchester United and they did it again in 2013 when Gareth Bale arrived from Spurs for €100 million. Isco was another new addition that summer, signing from Malaga, with Toni Kroos joining the following year from Bayern Munich. 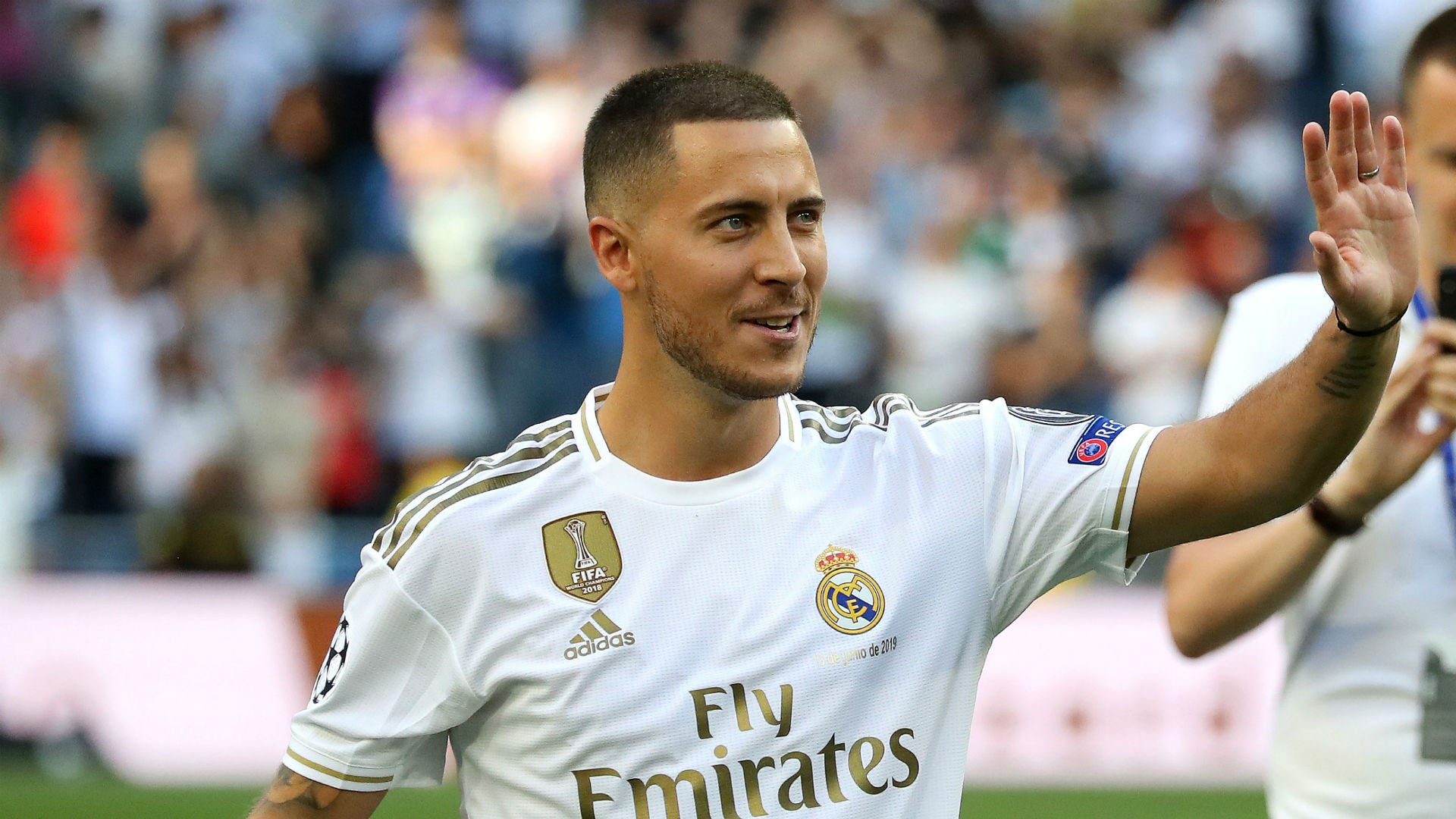 While not all of Perez's second-era Galacticos have lived up to expectations and domestic dominance still hasn't materialised in the past 10 years, the recruitment policy certainly laid the foundations for Madrid's recent hegemony over European football, which remarkably saw them collect four Champions League titles in five years between 2013 and 2018.

During that period, the nature of the club's signings noticeably changed, with more younger, less established talents being targeted ahead of marquee names.

However, the departure of Ronaldo at the end of the 2017-18 season and the team's subsequent decline in fortunes has seemingly forced a change of tack.

Hazard, despite his modest protestations to the contrary, was the latest Galactico, arriving as he did as one of the world's best players with a €100m price tag around his neck.

However, injuries have plagued his time in the Spanish capital and he has been unable to live up to expectation. He has made just 22 competitive appearances in his first season and 31 in his second. He has had an easier time in 2021-22 but will have to get back to his best to go down as a Galactico.

Striker Luka Jovic, who also joined the club in 2019, is less accomplished than the Belgium midfielder and cost the club €60m. He was expected to go on to be categorised as a Galactico in time, but he was loaned back to Eintracht Frankfurt last year. So far in 2021-22, he has been given playing time but has not been able to secure a place in the starting XI.