Weah, Musah and the winners and losers from the USMNT's November World Cup qualifiers 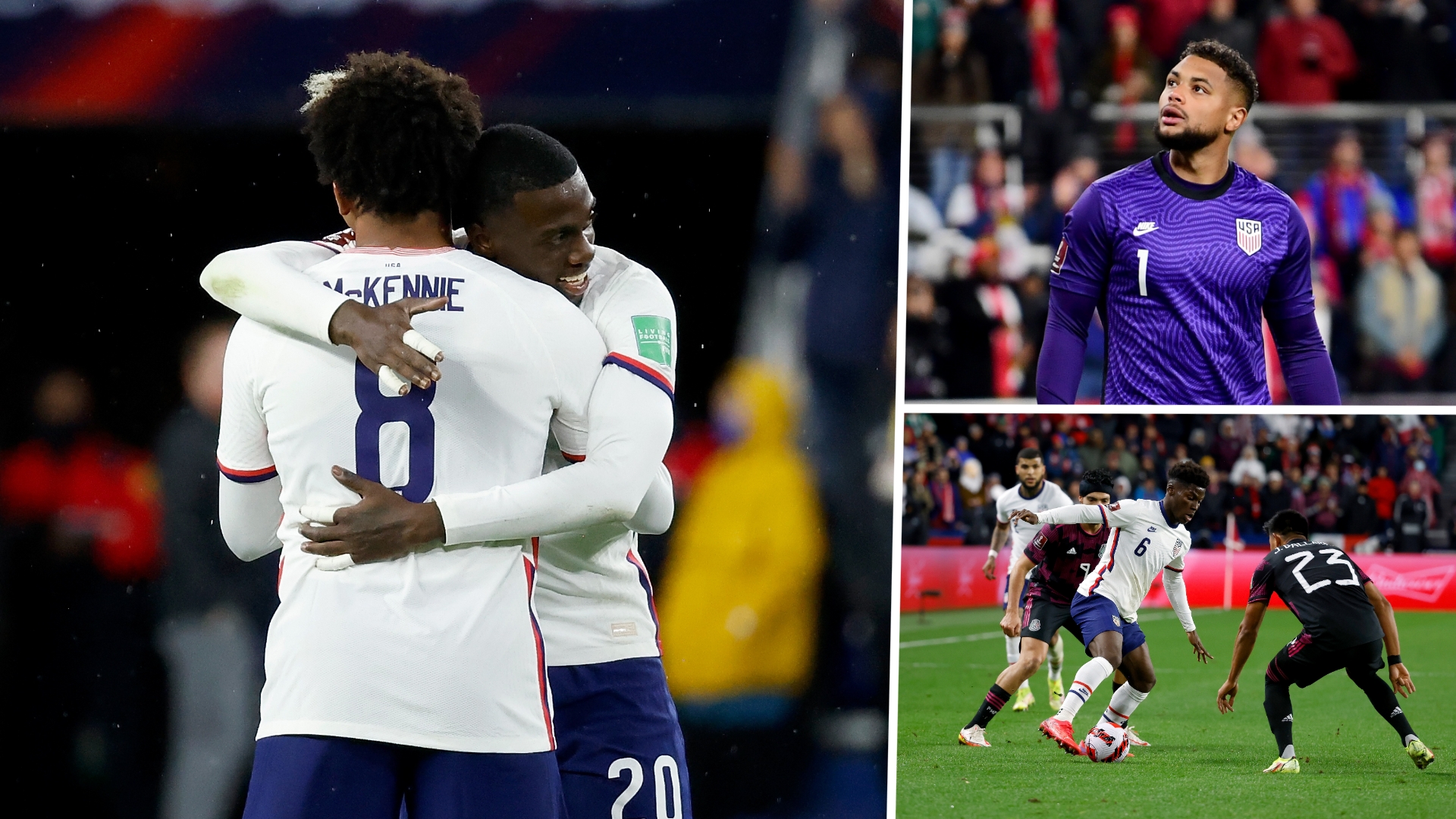 The U.S. took four out of a possible six points, setting themselves up fairly nicely for 2022

If you had offered the United States men's national team four points from their November window this time last week, they definitely would have taken it.

But, now that we're here, looking at a week that saw the U.S. take down Mexico with a statement win before drawing Jamaica in a fairly lifeless draw, it is hard not to feel like this window could have returned something more.

The U.S. were not perfect in these two games, the final World Cup qualifiers of 2021, but they put in what was almost certainly their best performance of the year in that 2-0 win over El Tri.

The U.S. really took it to their neighbours from the south, outduelling and outplaying Mexico in what felt like a defining moment in this rivalry's recent history.

And then, against Jamaica, they crashed back to reality. The young USMNT faltered on the road once more as they were undone by Michail Antonio's wondergoal.

From that moment on, they seemingly had the wind knocked out of them and were lucky to escape with a point.

That point, Gregg Berhalter says, was good enough. The U.S. sit second in CONCACAF's World Cup qualifying table, just behind leaders Canada after their own win over Mexico.

This window, Berhalter said, was a success, as it positioned the U.S. well heading into 2022.

With that said, GOAL takes a look at the biggest winners and losers of the USMNT's November window...

Tim Weah was nothing short of fantastic through the past two games, building on a strong outing against Costa Rica with a pair of Man-of-the-Match performances.

He provided the assist for Christian Pulisic's game-winner against Mexico and then dazzled on the USMNT's lone goal against Jamaica.

To put it bluntly, Weah is playing with a confidence rarely seen from him before.

"Already coming into the game, I knew that I was gonna have to make an impact after the Mexico game," Weah said after the Jamaica draw.

"I knew that there were going to be a little bit more expectation with me starting again. Obviously, I'm just happy to take that opportunity and help the team.

"When I'm here, I feel I feel amazing. It's like a breath of fresh air being with the boys. We play so well together. We've known each other for a long time, so it's truly amazing coming back here and playing and I think it shows on the field."

Weah went on to say that his next task is to bring this form back to his club, with Lille facing vital Ligue 1 and Champions League games in the coming days.

But, even with the USMNT's winger group as deep as it is, Weah is as good as any of them, and he is currently playing better than anyone else with the national team.

John Brooks is not a 'loser' because he was left off the roster for this round of games, as the 2014 World Cup veteran handled his exclusion with grace.

He is here, though, because the USMNT, by and large, did not look like they needed him, as the rest of the centerback pool stepped up in a big way.

With Brooks left out of the squad due to his recent struggles in CONCACAF, the U.S. conceded just once from open play, though no one will blame the central defenders for Antonio's long-range blast.

Miles Robinson looks every bit like the No.1 defender many expect him to be going forward, despite his silly dismissal against Mexico.

Walker Zimmerman, meanwhile, has provided a much-needed veteran presence, taking charge in both the games this window.

And Chris Richards, despite his age, has not seemed in awe of the occasion, although he was lucky to avoid conceding a penalty against Jamaica.

That is not to mention Mark McKenzie, who was also in the squad, or Matt Miazga, Aaron Long and Tim Ream, who were not.

If the World Cup started right now, it is more likely than not that Brooks would be in the USMNT squad. But he is no longer undroppable, and he faces a fight to earn back his place.

There are not many, if any, players in the USMNT player pool that can do what Yunush Musah can do.

What the teenager does is, in theory, somewhat simple: he gets the ball and moves it forward. But the way in which he does it is so graceful, so beautiful to watch and, ultimately, so important to the USMNT as they aim to take that next step as a team.

Against Mexico, Musah was slightly under the radar, but nothing sort of fantastic. The Valencia star is superb at assessing and then playing out of pressure, giving team-mates a trusted outlet against any team pressing high.

Musah is still just 18, but already has a fantastic understanding of space and where he fits into it. He knows exactly when to play out of it and exactly when to put his shoulder down, drive forward and put defenders on the back foot.

Against Jamaica, he did less of that, with Berhalter revealing after the game that the youngster was battling strep throat.

But it was his performance against Mexico that was the big one, a game that further etched his name alongside Weston McKennie and Tyler Adams as go-to midfield starters.

Matt Turner has been pretty close to perfect for the USMNT this year, and that is not an exaggeration.

He has conceded just four goals in 12 games, and just two of those came from open play, with both the result of comically bad defending.

He has literally won the USMNT several games single-handedly, and was the team's best player at the Gold Cup and through the early games of World Cup qualifying.

And yet, if this camp is any indication, he is still chasing Zack Steffen for that No.1 goalkeeping spot.

Berhalter spoke earlier in the window of the difference between the two shot-stoppers, pointing to Steffen's ability to play with his feet as the deciding factor in the battle between the to.

He also said that that battle is far from over, but by starting Steffen against both Mexico and Jamaica, it is quite clear where things stand in this competition.

So what will it take for Turner to leapfrog Steffen? Well, it cannot be club form, as Turner has just led the New England Revolution to a record-breaking point tally in MLS. Steffen, meanwhile, remains the second choice at Manchester City, although there are few better places to be a back-up.

On a human level, Turner will rightfully be disappointed not to play in these games but, on a professional level, this is the way things work as a goalkeeper, especially on the international stage.

How quickly things change in a few months.

Just a few weeks ago, McKennie was out of the national team. Now, he is back, and better than ever.

The Juventus star was vital to the team's win over Mexico, as it was his energy and, ultimately, his goal that put the game away.

His absence was just as vital to the team's draw with Jamaica, as that energy was noticeably absent from a fairly lethargic U.S. effort.

In the weeks since he was dismissed by the USMNT for violating team rules, McKennie has seemingly taken the message to heart. He has put his head down and shone for both club and country, scoring big goals, making big plays and moving himself right back into his managers' plans.

That is all you can ask of a young player when they mess up and, these days, McKennie is not messing up many things when on the field with the U.S.

At just 28, DeAndre Yedlin is cast as the old man of this ridiculously young USMNT group. But he is not just that.

Instead, Yedlin is an in-his-prime, veteran back-up that should give the USMNT plenty of confidence whenever he is thrust into action.

As things stand, Sergino Dest is the USMNT's go-to right back, and rightfully so given all that he can do on the attacking end. And then you have younger players like Reggie Cannon, Bryan Reynolds and Joe Scally also in the mix.

But none can be trusted quite like Yedlin, who stepped up admirably in Dest's absence this window.

Yedlin still has that breakneck speed that saw him burst on the scene ahead of the 2014 World Cup and, as the years have gone by, he has developed a better sense of himself as a player.

In these games, a presence like Yedlin's is so valuable, and in moments where Dest cannot go, Berhalter has every reason to trust Yedlin to step in and steady the ship in a way that even the Barcelona defender sometimes cannot.