In an exclusive interview with Goal, the North Carolina Courage ace calls for more support in the battle against inequality in the United States

North Carolina Courage forward Jessica McDonald is optimistic that the NWSL can help spark meaningful change in the U.S.

In recent weeks, America’s reckoning over inequality has intersected with the sports world in remarkable fashion.

The wildcat strikes of NBA, WNBA, MLS and MLB players over the police shooting of Jacob Blake sought to highlight the issues of racial injustice and police brutality – problems that the WNBA has been attempting to address for years.

On Saturday, the NWSL returned to the pitch for the first time since the Challenge Cup ended in July, with the Washington Spirit and Sky Blue FC both wearing T-shirts that read, “Either with us or against us” and “Black Lives Matter”.

The T-shirts were created and delivered by WNBA player Natasha Cloud. It was the first sign of a partnership that McDonald hopes pays major dividends in the future.

“We’ve had some sit-down chats with some WNBA players, so we just want to follow in their footsteps,” McDonald told Goal.

“It’s really cool to come up with some ideas and see how we can move forward with all this and pick their brains as well.

"It was, overall, a very positive conversation. We were able to ask a lot of questions and we had a lot of great feedback as well.”

Another potentially important development is the recent formation of the Black Players of the NWSL, a coalition who said recent injustices “called us to mobilize and establish how we will create necessary long-term change for the future.”

In the formation announcement, one player in particular was mentioned: Utah Royals rookie Tziarra King. 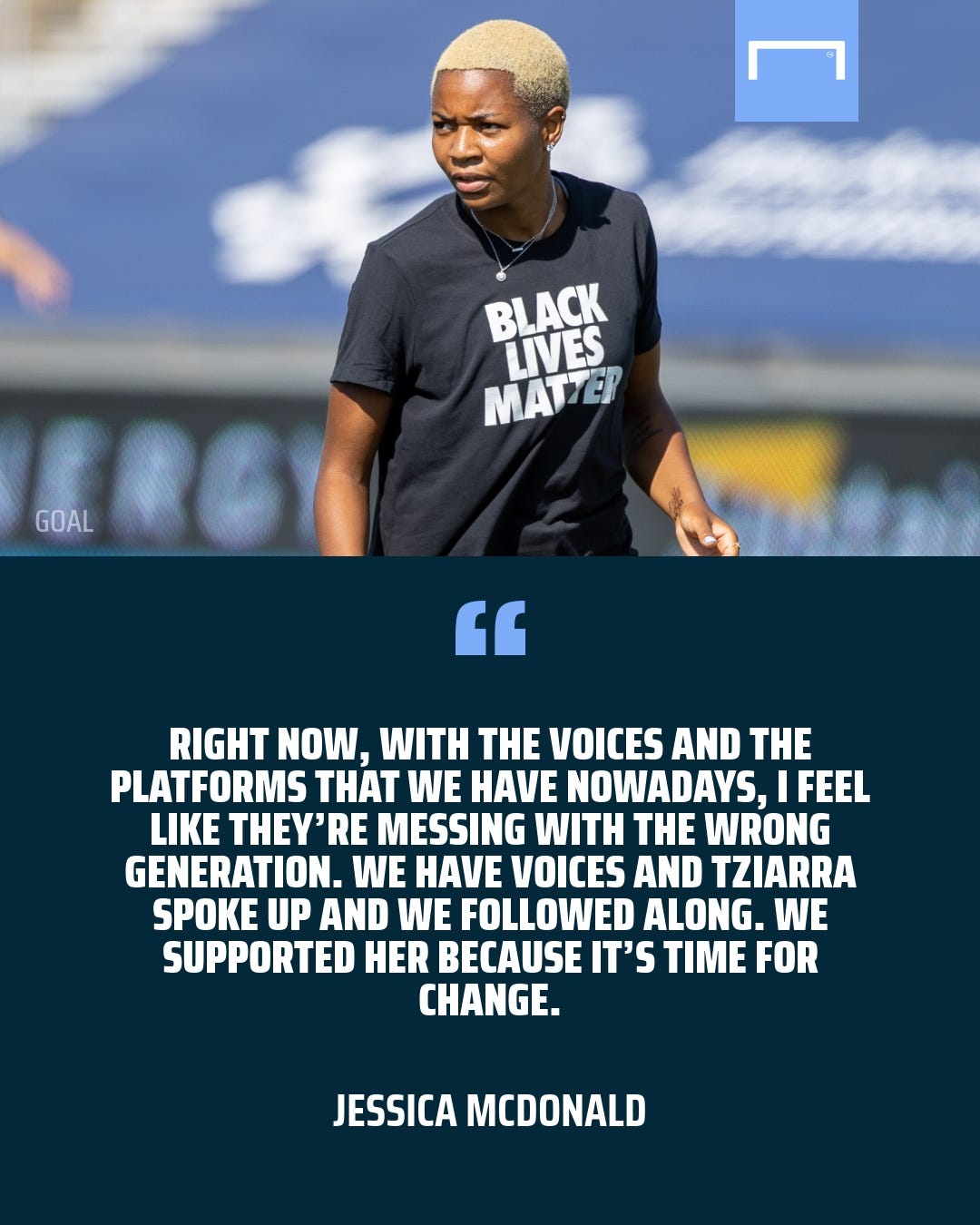 King was forceful in her condemnation of Royals and Real Salt Lake owner Dell Loy Hansen, whose comments slamming his players for skipping a match set off a firestorm that eventually ended with the billionaire being forced to sell both teams.

No other Royals players spoke out against Hansen aside from King, a 22-year-old with a grand total of four career NWSL appearances under her belt (King’s fellow rookie Kate Del Fava did tweet her support for her teammate’s sentiments).

“I thought it was a very bold and amazing thing for her to do to step up to the plate and speak out about it because, in history, none of us ever spoke out about these things,” McDonald said.

“For her to do so, I give her all the credit in the world for doing that. That's all we could do, support her.

“Right now, with the voices and the platforms that we have nowadays, I feel like they’re messing with the wrong generation. We have voices and she spoke up and we followed along. We supported her because it’s time for change.”

That change, though, won't happen unless all of NWSL actively works to make it happen. In other words, it will take more than just Black players, who make up a small percentage of the league’s rosters.

The entire NWSL was on board with wearing "Black Lives Matter" T-shirts during the Challenge Cup, while most players kneeled for the national anthem to show solidarity over the fight for racial justice.

However, McDonald says that even more support is required.

“It would be nice to see consistent continued support from each and every person who started to support this when they kneeled during the national anthem at the NWSL Challenge Cup,” McDonald said. “Just keep that consistency.”

Though McDonald is quick to stress that the Courage have been exemplary in this regard, it will take more than one team to advance the cause.

“On the Courage we’re all so close, the camaraderie in our locker room is absolutely amazing and we've had plenty of players speaking out who’ve been very consistent doing so,” the forward said.

“There’s a small number of Black athletes in the NWSL, so we’re outnumbered right now. We’re trying to start a movement and that would start with our white friends and teammates because they outnumber us.”