The former U.S. Under-23 defender signed with Dutch club Excelsior, capping a roller-coaster two years in Europe since leaving MLS

Shane O'Neill made the jump from Major League Soccer to Europe in 2015, and his recent signing of a contract with Dutch first division club Excelsior served as the culmination of two years of experiences that helped him grow and mature — and move a step closer to realizing a dream.

O'Neill's journey was one he couldn't have seen coming, but it's one he doesn't regret — even after spending nearly a full year without regular minutes, or playing for a club that didn't want him. At one point, he found himself in a lower-tier league that left him questioning the state of his career.

"It's been a crazy journey," O'Neill told Goal in a phone interview from the Netherlands. "Thinking back to the teams I trained with, and thought I'd be signing with, it's crazy. And the time in Belgium and England, it really was a humbling experience."

O'Neill is coming off an outstanding season with Dutch club NAC Breda, which he helped earn promotion from the Dutch second division to the Eredivisie. It was also a season that helped resurrect O'Neill's career after a nightmare first year in Europe. His European journey began by signing with Cypriot club Apollon Limassol, which had arranged to loan O'Neill to Belgian first division club Royal Excel Mouscron.

"I kind of underestimated what going to Europe would really be like," O'Neill said. "I had this image in my head of what it would be like to just go to Europe and play and it just wasn’t like that."

O'Neill arrived in Belgium well into the Jupiler League season, and never factored into Royal Excel's plans. He failed to make a first team appearance during his half-season there, leaving him to spend months biding his time until he could make another move.

"I was in this 100 percent only French-speaking town and just sitting in the stands every week," O'Neill recalled. "I kind of lost my confidence there. It didn’t even feel like I was part of the team."

His loan was terminated after half a season, leaving O'Neill to head into 2016 searching for a new club in Europe. There was little interest, though, and after some unsuccessful trials he eventually wound up going on loan to English club Cambridge United, a team in League Two, the fourth division of English soccer.

"When I went to Cambridge it was really just picking up the pieces," O'Neill said. "I didn’t really have much confidence. I was questioning a lot of stuff in terms of what was going on. I was playing in the midfield and thinking, 'What is going on?' To be fair to Cambridge, they were fantastic people, it was just the situation. It wasn’t good for me.

"I learned from the experience there though," O'Neill added. "You go to League Two and think that you can just boss it. Then you go and have guys trying to elbow your head off of you in training. You learn how to fight for your spot." 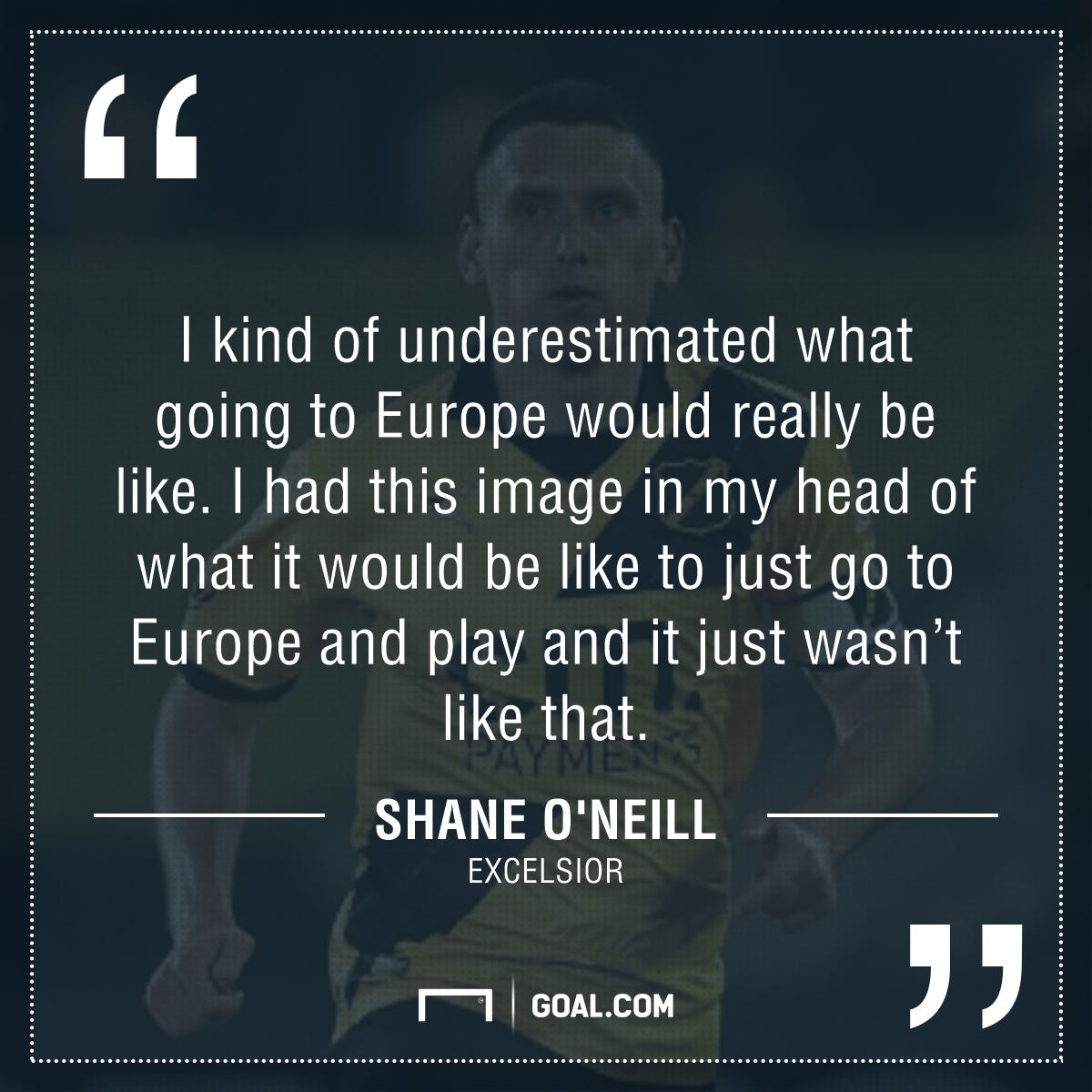 Playing time at Cambridge was sparse, making it a full year in which O'Neill barely saw playing time. But there was one saving grace during that time, as he played with the U.S. Under-23 national team in its push for Olympic qualification. His time at Cambridge also helped him focus on where he saw himself positionally going forward after spending his early career alternating between central midfield and central defense.

"(Cambridge manager) Shaun Derry sat me down before I left and said, 'You really need to figure out what you are and who you are as a player and just focus and put all your energies into that'," O'Neill said. "After that I fully committed to being the best center back I could be, and I really feel like that helped me a lot through this whole process."

After his loan stint at Cambridge, O'Neill went into the summer of 2016 facing major uncertainty. Would any European clubs take a chance on him after a full year without regular playing time? Was it time to return to the United States and MLS?

Enter NAC Breda, a century-old club that had long been a regular in the Eredivisie before dropping to the second division after the 2014-2015 season. Breda presented O'Neill with an opportunity to revive his career and he made the most of it, earning a regular starting role in central defense and helping Breda earn promotion back into the Eredivisie after the 2016-2017 season.

"With everything that happened at Breda, that's a special club, and a club that I think will always be really special to me," O'Neill said. "Coming out for night games in Breda, with that atmosphere, was incredible."

O'Neill's time at Breda not only helped revive his career, it helped sharpen the technical aspects of his game considerably.

"We played out of the back at all costs at Breda and I just feel like that helped my game so much in terms of confidence on the ball and playing through the lines," O'Neill said. "You had to be able to play through the lines and play it forward, and I love that style."

After that fairy tale season at Breda, O'Neill believed he would stay at the club as it returned to the Dutch top flight, but Breda added two new central defenders this summer — including Pablo Mari on loan from Manchester City — leaving O'Neill with the harsh reality he would once again have to hit the open market in search of a new home.

The good news for the 23-year-old defender was that his impressive play for Breda last season made an impression, and led to interest from clubs in France, Portugal and Denmark. MLS teams also expressed interest in bringing him back — though his original club, the Colorado Rapids, wasn't one of them.

O'Neill acknowledged being open to an MLS return, but he also felt like he had unfinished business in Europe.

"Deep down I wanted to come back to Holland really badly," O'Neill said. "After last year, and seeing the passion in this country, I really wanted to try and play in the Eredivisie. Luckily Excelsior came through with an opportunity to play in this division."

O'Neill's new opportunity will also present new challenges. He is joining a team that already is in season, and he must work to catch up from a fitness standpoint after missing preseason.

But O'Neill is up for the challenge and isn't taking anything for granted. His early European struggles have helped him develop a level of humility and toughness that should serve him well as he continues to try and prove himself overseas.

"I think a lot of people felt that last year was good, but wonder can I do it in a top division," O'Neill said. "That’s going to be a big thing for me. It's not going to come quick because obviously I have to get my fitness up, but if come October, November, I can start getting some games then hopefully I can make something good this year.

"I have ambition of playing in the Eredivisie and beyond," he added. "I do really believe I can do well here. It’s just about staying fit and staying patient for the opportunity."